Why Do We Power Up Tokens on Hive? * LEO Power-Up Day

The question in the title is straightforward. And you'll see what a long answer I can give to it, lol.

Why do we power up tokens on Hive, including HIVE?

If you say to get curation rewards, or in the case of HIVE to get resource credits and governance influence, you'd be right.

But that's your/our gain. What's in it for HIVE or the token you power up, like LEO, because today is the LEO Power-Up Day?

Let's start with the prehistory of crypto, back when regular (although kind of geeky) people mined bitcoin.

Why did they do that? Because it had value? Not at that time. I forgot how much bitcoin did that poor guy pay for a pizza or whatever it was. He probably isn't so poor anyway if he held onto some of that bitcoin mined early.

Few were visionary to keep it all this time.

The rest were doing bitcoin the greatest favor possible. Provided its initial distribution, when bitcoin could have easily died off.

There were enough who believed in what bitcoin represented, or it would have never passed the initial phase of early distribution when it was quite centralized.

Then faucets appeared and took distribution to another level. I believe this was the best thing that happened for the wide distribution of bitcoin in the early days. Regular people were involved, not just technical individuals running mining software on their laptops, because getting bitcoin from a faucet was as easy as clicking a button.

Returning to our days and Hive. Faucets fell out of favor as a means of distributing tokens.

That's where I believe Dan Larimer (at least I think it was still him) was a genius when he created the reward pool as a way to distribute author and curation rewards on steem. Since we on Hive built on that code, we continue to have the same method of distribution. Of course, there are also the witness rewards, HDF proposals funding, and interest on HP. But witness rewards and HDF are more like ways to ensure targeted funding than to ensure wide distribution.

The reward pool still has this role, and such an important role it is. We can see that now maybe more than in the past when centralization becomes a vulnerability in itself in crypto.

With the creation of tribes and then outposts on Hive-Engine, the reward pool as a concept was borrowed for them and their tokens. That's how LEO is distributed, mainly.

So where does the importance of powering up come in?

Powering up gives people who care enough about the platform to become stakeholders the means to influence how the reward pool is being distributed.

And that has worked pretty well, at least lately on Hive.

Since this is November 15th, we are up for another LPUD.

I thought I'd be completing my LEO staking goal for this year today, but it looks like I need to wait at least a few more days.

Hopefully, that will happen at the end of the week, when I have my Hive goals update post. In fact, I'm kind of counting on that.

Today, I powered up a little over 154 LEO, which is all I had liquid for now. 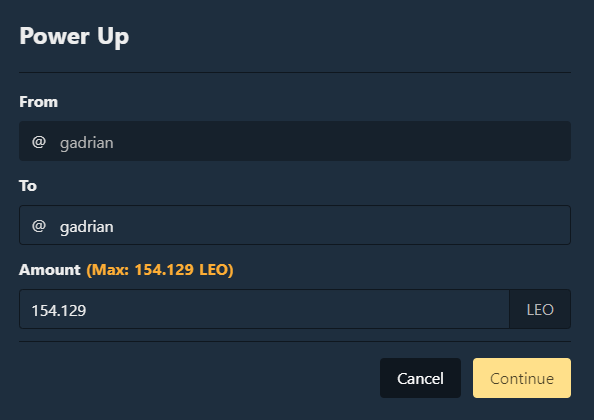 That means about 112 LEO are missing to complete the goal. Maybe I'm stretching it for this week. I don't have any hurry with this goal, but it might still be achievable since I should receive about half of that as rewards from my delegation to leo.voter.

That's the phrase I tell myself these days, when the bull run comes, those who didn't accumulate right now will regret it.

Yes, that's true. This is the time to accumulate. The interesting part is that, as much as nobody wants this crypto winter to extend much longer, the longer it goes, the more accumulation at lower prices can be done.

Will the reward pool be depleted at some point? Or is it getting refilled somehow?

Congrats on your LEO power up, you can still hit it next month.

The reward pool is funded through inflation. For HIVE, inflation slowly reduces over time until it reaches a certain point (I think it's 1% per year) then it remains at that level. Currently, it's something like 7+% per year (the level of inflation can also be controlled through conversions - HIVE can be burned or issued through them). So, the reward pool never depletes. It "refills" continuously with new inflation.

With prices low, I am buying as much as I can afford. The market will be back.

That's great! And the market will rise at some point.

By delegating your HP or some token to the @thranax bot, you are helping to support the community and the bot and earning healing rewards daily! and also you will get token with healing

Thanks! I'll check that out.

here is all the information gentleman https://hive.blog/pgm/@thranax/token-and-hp-summary-week-1

Nice power up and that 10k LEO Power goal is so close for you. I don't see any reason to rush it though because you still have over a month to get there.

That's true, I don't have to rush it. I thought I could focus on something else in December if I finish it earlier.

Maybe I'll be an orca next year.

Yeah, with your speed, no doubt.

If the milestone would be 20k (I haven't checked), it wouldn't be a very complicated goal.

Well, since that is easier for you, I think you deserve a higher goal.

Lol, nope. I'll probably go for this one. There are plenty of goals to chase. There can't all be difficult.

Why Do We Power Up Tokens on Hive?

To keep building and strengthening our immutable digital home. Hive Power(or Leo Power) is an important element that constitutes this home.

Politically, it upgrades the influence power in Blockchain governance.

One strength of "our immutable digital home", as you put it, comes from the locking mechanism that prevents even the possibility that huge amounts of HP could get out of the ecosystem at once, leaving the chain's governance vulnerable to attacks.

Then the strength or weakness comes from how that HP is used.

I don't own enough Leo or Hive to power up. I also don't have the fiat to buy any. I do mostly commenting.

Totally agree. We often get blinded by quick gains

Best of luck staking your LP goal. I have been getting Leo from a delegation and I just keep staking that.
Pretty soon my votes here will actually mean something.
!ALIVE
!CTP

Delegation is a good way to get some LEO. If you're staking that, yep, your voting power will grow over time.

Yes, I stake whatever I get every day!
Have a great day, @gadrian😀
!ALIVE
!CTP

Good explanation of why we power up and how it helps build the value. !BBH

@gadrian! Your Content Is Awesome so I just sent 1 $BBH (Bitcoin Backed Hive) to your account on behalf of @fiberfrau. (2/5)

Thanks! I was taking the approach of explaining it through distribution, and that is one of the most important things crypto needs to do: to be widely distributed, but still end up in the hands of people who care about it as much as possible.