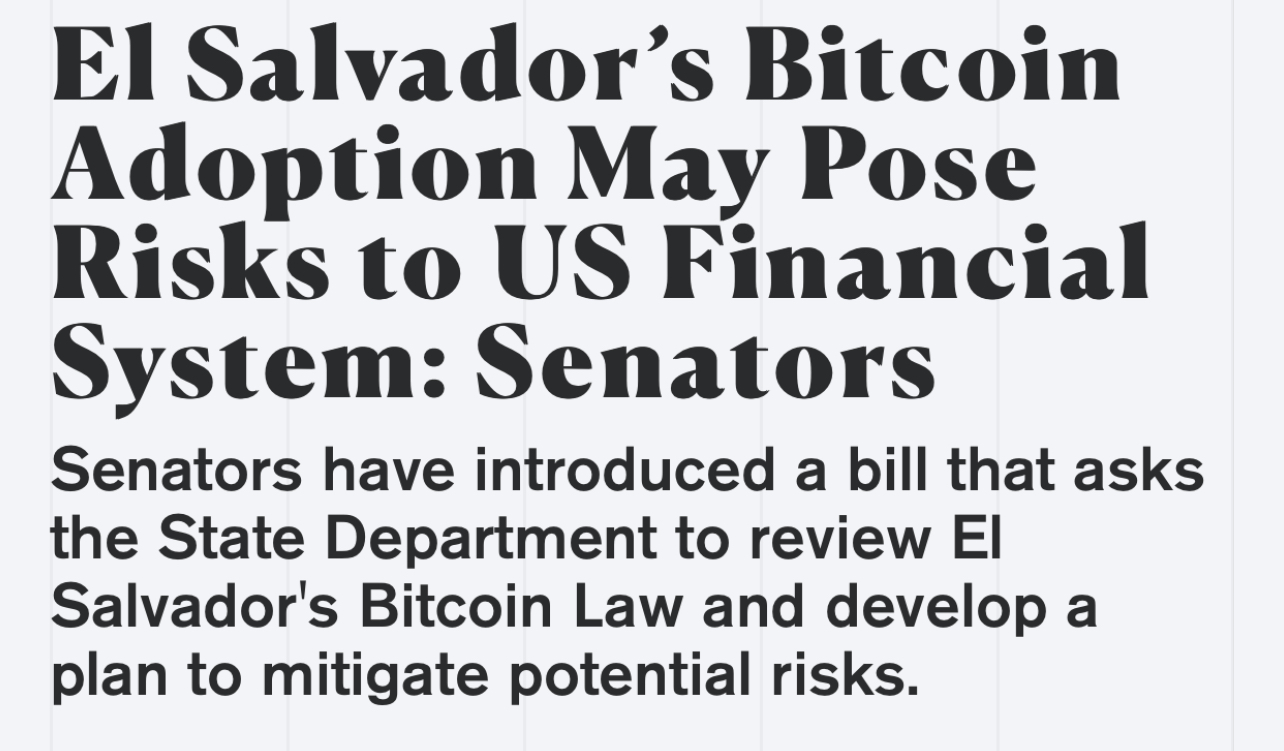 Creative minds of US Senate, senators Jim Risch, Bob Menendez, and Bill Cassidy have introduced a bill titled Accountability for Cryptocurrency in El Salvador Act. The title of the bill, its intentions and the implications without any due diligence are funny and annoying at the same. Senators are implying that somehow El Salvador's adoption of bitcoin as legal tender pose risks to the US Financial System. This looks and sounds wrong in so many levels.

First, how is internal financial system of a sovereign country any of their business? We have seen series of attacks directed at El Salvador and its implementation of bitcoin as a legal tender from international bankers like World Bank, IMF, Bank of England, and others already. It is one thing to express disapproval or disagreement of foreign country's decisions or actions. But it is completely a different thing to declare actions of a country to build a better future for its people as a risk to a financial system.

US financial system has many risks and problems. What El Salvador has been doing with bitcoin isn't one of them. El Salvador is a country with a GDP or 25 billion dollars. By comparison US GDP is 21 trillion dollars. The difference in the sizes of economies is just enormous. These US senators waste billions of dollars on daily basis and see El Salvador's monetary policy as risk to the US financial system? If they only could spent their time on fixing real problems, instead of embarrassing themselves and wasting time with frivolous legislation, maybe they would be able to accomplish something useful.

This is so frustratingly illogical. They have concluded that there are risks already and want State Department to come up with something to justify this position. In other words fabricate analysis to make their point. Then also come up with solutions to these fabricated analysis that prove El Salvador's bitcoin adoption is a risk to the US financial system. lol.

That is not how truthful and genuine analysis work. You don't get to make conclusion without any evidence. That is if you were seeking truth. If you are so interested in how bitcoin implementation is going. Why not just hire third party analysts who understand the finance and bitcoin as a technology and the honest work. Once the proper and honest research is done then read the final assessments and make an educated conclusions. I guess that wouldn't serve the intended political games.

The president of El Salvador, saw this crazy bill and responded on twitter:

You have 0 jurisdiction on a sovereign and independent nation.

We are not your colony, your back yard or your front yard.

Stay out of our internal affairs.

Don’t try to control something you can’t control 😉

On an international stage, such actions by US Senators are so disrespectful. That is not how diplomacy is conducted. Bukele, gives a perfect respond. They do have zero jurisdiction over El Salvador and should stop acting like bullies. Even if El Salvador's decision is wrong and they are making a mistake, it is their mistake to make. Nobody complained when El Salvador adopted USD as legal tender a couple decades ago. USD is still a legal tender in El Salvador alongside with bitcoin. If anything US Senators should be supportive on El Salvador's ambitions to pursue a better future to its people.

What happened to free market, democracy, will of people, rights of countries to determine their own future? When convenient all politicians try to preach these concepts and how important they are. But then easily forget and violate them if there are some personal or political gains to have.

What would really be appropriate is countries with smaller economies around the world conduct proper research the risks global reserve currency like USD and fiat systems pose to their economies and financial systems. And come up with risk mitigating measures to build better economies their people deserve. Maybe, just maybe they will realize bitcoin offers much more than they could have ever asked from a solid monetary system.

US debt is so high, that I doubt it will ever be paid or there any intentions to pay it off. The annual deficit is just ridiculous, and incredible amount of money is just being wasted year over year. If any of these senators were true to protecting US financial system, economy, and prosperity of people, they would put all of their efforts and time in figuring out ways how not to waste money and be a little bit fiscally responsible.

This one the problem I have with us government not only in crypto but in all ways , they always act like the governor of the world,there are the devil, they cost most of country problem but act like saint , what's wrong when a sovereignty state adopt whatever currency they want to ,us is a big shit

I feel that way too.
It makes me very uncomfortable.

Maybe, just maybe they will realize bitcoin offers much more than they could have ever asked from a solid monetary system.

I feel like their problem with Bitcoin in El-salvador is that they fear that it would inspire other countries to follow suit, which may ultimately force the US to adopt cryptocurrency in some way. This is not good for politicians.
Fiat currency makes stealing a lot easier.

With Cryptocurrency, every transaction is monitored. Most politicians consider it a nightmare.

yep yep...
The fear is in their eyes and in their words.

Lol they can't tourism is up in the country over 30% and their GDP numbers have been fantastic, and the bonds have not even been released yet so theres going to be another boost, if El Salvador is a success story it kills the wests pipe line to extorting latin america and African countries through IMF debt

You have 0 jurisdiction on a sovereign and independent nation. We are not your colony, your back yard or your front yard. Stay out of our internal affairs.

I was embarrassed to read this Tweet and followed up by googling the bill. This tactic of saying Bitcoin is dangerous because it facilitates drug dealers and international terrorists is becoming a very convenient excuse to do inexcusable things. This bills language is inexcusable. These Senators are acting like attack dogs for the IMF and other organizations who profit from poverty and economic desperation. It is a sad state of affairs when this happens, very sad, very inappropriate.
These Senators need to stay in their lane which is in America, not El Salvadore.

Yes the language of the bill, starting with the title is just crazy.

I don't think it's aimed at El Salvador, their legitimate concern (from their perspective) is that this spreads to other Latin American countries helping them to be less dependent on America.

The headline, as usual is just attention grabbing.

I totally agree with this, it seems to be aimed at hoping other countries to become less dependent on us. Which they should totally be!

I agree with this analysis too.

We obviously know that those senators don't really understand crypto and that it's just some dumb PR stunt. I have no doubt that El Salvador doesn't need to answer to those senators at all because it's their own country. It's one of the things that I don't like about the country I live in (US) and that is the fact that they are trying to interfere with some many foreign conflicts. I would prefer it if they fixed what was happening in the country first before moving elsewhere.

This will take down their entire monetary system. When their centralized monetary system goes, everything will go with it. That is why I am not surprised by their stance. Great article.

It's very annoying when you stick your nose where it doesn't belong, exactly what's going on in El Salvador's case.

Its ridiculous that any country would try to change or police another sovereign nation in that way, especially when it comes to their financial system. It just seems absurd to me.

This is so frustratingly illogical.

Everything they do man! Everything!

First, how is internal financial system of a sovereign country any of their business? — Honestly! I find this really appalling, whats with the US and the habit of poke nosing everywhere??!! I think the dollar currency being pegged with other countries’ currencies affords them the privilege to meddle in their affairs. A country such as El-Salvador is trying to put measures to boost its economy and this mother hen of a country won’t just allow them be , all up in their space and grill ; this should really not be . Not all Latin countries want to be dependent on the US forever and I feel the US government is starting to read that handwriting on the wall .

OK boomers…
You have 0 jurisdiction on a sovereign and independent nation.
We are not your colony, your back yard or your front yard.
Stay out of our internal affairs.
Don’t try to control something you can’t control 😉

Haha I thought you were paraphrasing his answer but he literally said that. Love it

Actually most of the country own debt in one way or the other.. I am not sure none of them will be able to pay it in the nearest future

Its rediculous what the US senators are doing, always blaming someone else for their financial problems.

Like you said @geekgirl; " Leave El Salvador alone" and start to take care of your problems and your own people.

So true, more like they blame others for their incompetence.

yes... but it's about power and power is bound to fiat money which in turn is undermined by bitcoin... pretty obvious why they feel threatened. The old system will be left behind soon enough (I hope) :)

:) I'm sorry, I thought I read 'creative minds' and then the words 'US Senate' all in the same sentence. :P yea, what makes the US anyone think they can interfere with what another country chooses to do with THEIR economic system??

That's why I called them creative minds. :)

Devils advocate.
The acceptance of Bitcoin as a legal tender in El Salvador will highlight to other countries that there is a replacement to the USD as the pegged currency. So in essence would it not then pose a risk to US financial system?

Mexico is thinking of making Bitcoin a legal tender. Probably following El Salvador's foot steps. The change is probably what the senators are trying to avoid because if the world economy no longer relies on USD as the pegged currency, would it not hurt US financial systems?

That's true. But then they should consider bitcoin itself as a threat and not what a country is doing. Your point makes sense though.

And I see your point.

I think those senators are just face front. My guess is that bankers are running the show, because bitcoin could be a significant threat to their monopoly.

Yes, politicians are on bankers' payroll.

they are obviously not happy with anything that make other nations independent. the true face of the greatest power in the world.