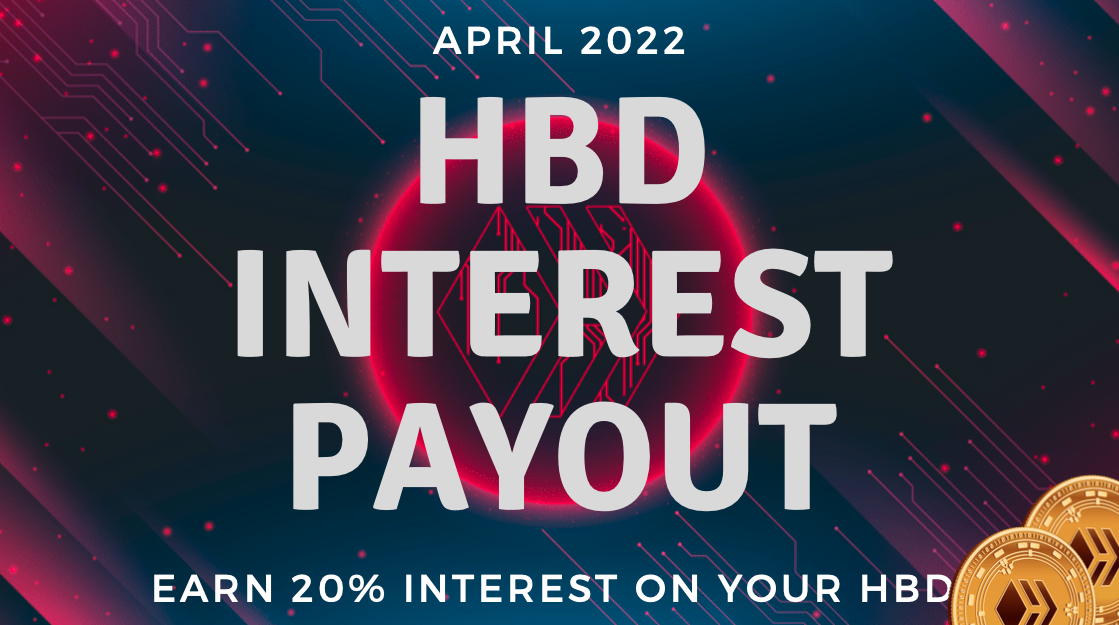 HBD keeps getting more interesting every month. April is gone but it goes into history as a significant milestone in HBD's life. Ever since Hive consensus witnesses decided to activate interest payments for Hive Dollars, the progress in making HBD an attractive investment instrument and an algorithmic stable-coin that actually works has been incredible. HBD has able to maintain its peg to USD surprisingly well for many months now. When we thought the is no need to do anything else to make HBD better, Hive witnesses surprised us once again by raising the interest payments for HBD in Savings to 20% APR.

20% APR has only been activated three weeks ago. It was amazing to see decentralization in action when witnesses started signaling 20% APR, community discussing all pros and cons of such actions. It took less than 24 hours for 20% to become a reality since the time first top witness started signaling this interest APR raise. A year ago this high interest payments would be unthinkable, knowing who conservative and protective Hive witnesses are about the Hive blockchain. This has been a journey. It is great to see steps being taking one at a time with calculated, educated, and collaborative decision making.

I was among the one who wanted to see 20% interest payments, not just as an investment option but also to test the theory that higher APR on HBD may result in more demand for Hive itself. It is too early to say what will be the outcome of this change. If it is not something beneficial for the chain it can easily be reverted back to lower APR, that is if witnesses decide to do so. Since witnesses are the protectors of the chain, chances are they will act swiftly in taking measures that benefit and protect the chain.

May is here, and it is time to look at the numbers. The numbers below only represent the HBD interest payments that occurred in April 2022. This wouldn't give the full picture regarding the demand and changes in demand for HBD.

Numbers went up as expected. However, not by a lot. Both total interest payment amount and number of accounts that received these payments went up. It looks like mainly the same accounts from previous months who have been holding HBD in Savings are receiving higher payments due to the raise of APR. More accounts receiving the payments is promising. I hope to see many more will experiment with HBD savings.

This is only the first month after 20% activation. May might show bigger increase in total payments and more demand for HBD. We will find out next month. At the very least those who were worried that Hive can't afford paying out 20% APR, don't have to worry anymore. Not until these payments go to millions. :)

This is interesting. I am starting to put more HBD to savings. I suppose it's just a habit. Transfer to savings and it's all great !

confused, where is @muenchen did you create that chart only by pending rewards?

Last interest payment on that account was in February. Needs to perform some savings transaction to get paid out, so it is still accruing.

The stats would still be better if stated the monthly earned payout, don't you think?

It kind of feels like it's just fueling a select few accounts lol. We will see how long this 20% lasts I don't expect for very long.

I hope your bloody wrong, we need more HBD in circulation

The high interest seems to be pulling HBD off the exchanges and into savings. It takes three days to withdraw money from savings; So transferring to savings actually takes the HBD out of circulation.

I am increasing my savings ... I have no plans to withdraw or use it for the next several years.

That makes a lot of sense and is getting over my head. In order to drastically increase circulating liquidity, institutions usually print money via bond emissions. But it takes a real @taskmaster4450 to make sense on topics like this.

Only those accounts that are willing to take the risk. We will see next month if more accounts are interested in HBD as an investment.

I got 0.4 hbd interest this month with 26 hbd now i added more

This is great opportunity as investment. I'm interested with this and will try to add regularly

Helpful stats and It would be great to see me there 😀

Very interesting, although my interest is to only save Hive power to be able help other people, however, great see that we had an alternative option like HBD... Great read

Hmmmm that's a good one helping people on hive is also is also important and many have forgotten that they are more focus on building themselves and focusing on people with higher HP and voting power sometimes its discouraging for people who don't have such opportunity, I think is important to help people grow and at the same time grow as individual,I love your thought @hiro-hive hope to see more of you

I think making directly HBD powered up is less demand and avail, isn't better to exchange HBD to HIVE and then making power up because HIVE price change compared with HBD?

With this provided 20% APR of HBD it will seduce more interested investors to make profit for this appeal. It will be more competitive and have big place among crypto stablecoins

It really encourage me to save HBD to earn good profit on this may, thanks for sharing this positive vibes with us.

Great explanation. But, how to buy HBD nowadays? I used to buy Hive at Binance, send it to my Hive account, changed it there to HBD. Now there is no option anymore (or at least I do not see it). How to do it in a simple way?

Are you having trouble send Hive from Binance? Or changing it to HBD? You could use the internal market which you can find in the wallet section or convert with convert option again in wallet section. Peakd has the best options in the wallet page to find these things.

No, no problem send Hive to Binance. I don't find button in my Ecency app "convert" from Hive to HBD. So I should go to my PC and do it there in wallet?

Yes, I think your best option is Peakd on a pc.

Thanks for a quick tip. Will check it out.

You should learn to use the internal market which is found on this link:

The first column on the page lets you buy HIVE with HBD. The second lets you buy HBD with HIVE. IT is a simple exchange that lets you trade between currencies.

The Convert Button does strange things. It is the mechanism that pegs HBD to the dollar.

HIVE guarantees that users can get $1 USD for 1 HBD. The convert HBD to HIVE button will burn the HBD and create $1.00 worth of HIVE. There is a 3.5 day delay and they charge a 5% fee. So, you should only use the convert process if the price of HBD is less than 0.95.

The convert HIVE to HBD process behaves in a similar fashion. You should only use it when the price of HBD is over 1.05.

In most cases it is best to use the internal market for your conversions.

PS: There is also pHBD HBD swap used for polygon. I think you should learn the internal market first

Thanks for these updates. You are a great blogger. I think this formula of putting HBDs into savings is interesting, I started doing it months ago when the interest rate was lower and I will continue to do so.

April was a great month for Hive , it was in the month I made my first transaction on Hive as well by transferring my little hive dollars into the Hbd savings . There’s a lot of prospect and potentials for this algorithm stable coin .

I was adding to my HBD savings back when it was 12% so the 20% is something more amazing. It's too bad I didn't make the top 300 but I have been adding more HBD each month so I think I will make the list in the next few months.

It's a novice bit of passive income each month. I hope the high interest rate lasts for a while.

20% APR is very high. Higher than the BUSD staking reward. I believe people should try SBD savings more as it's profitable now.

I think you ran your query before the payouts had finished...

The list includes payments in April blockchain time.
Your payment happened on Mar 1st. That's why it didn't show up in this list.
But will be included in next months report.

This is a great initiative that everyone must embrace. Thanks for the update dear.

It will be interesting to see if there is a big move into HBD once Hive goes over $1.

Can't wait to see May's results. It will be interesting or disappointing. lol

That top 3 are banking eheheh

We need more people taking advantage of this investment opportunity.

Hopefully more investors will get in

Wow I thought is yearly interest all this while I never know it's every month,let me sharply and save the little one I have

Payments are once every 30 days, if claimed. This helps with compounding.

This post is a reminder that saving on Hive is possible.
The list is holding just fine.
I will continue to hold for the foreseeable future.
!BEER

Hey @geekgirl, here is a little bit of BEER from @pouchon for you. Enjoy it!

Great stats and the numbers may grow this month and beyond especially when more people realize the power of compounding.

This is a very good one,nice interest payout,am also Joining this initiative too

Mine is there too.. I like the high interest 😁

It's really a novel and bold move. I don't know of any platform that offers that kind of APR on savings.

But like they say, there are always pioneers, then imitators, then a movement.

Actually no one says that, I just coined it a few minutes ago. But I believe it's true.