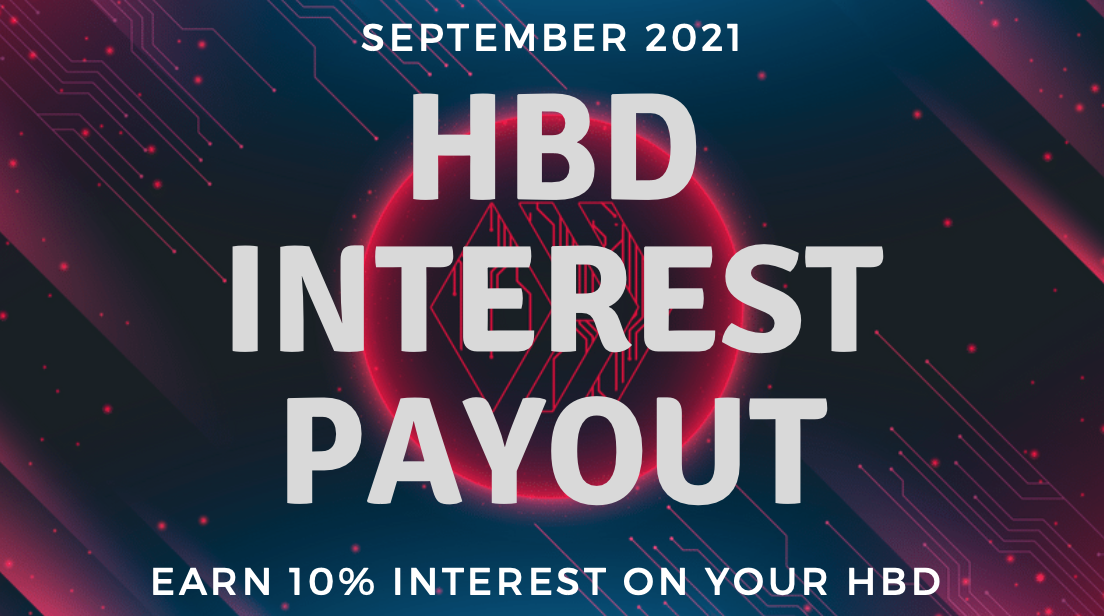 October is here and another month has gone by. Time flies. It is time to look at HBD interest payouts for the month of September. Hive blockchain is still paying 10% APR last time I checked.

First, let's take a look at the total payment numbers in the previous months.

In my last post I was trying to predict or was optimistic that in September these interest payouts will reach 10K HBD. It looks like I was wrong.

In September total amount of interest payouts dropped down to 2570 HBD to 1129 accounts. So what happened?

If you look at the list in the previous post, the top recipients of HBD interest payments were Mika and Alpha. It looks like they decided to explore other options for their investments. Not that I am trying to go through people's wallets, just a quick glance shows Mika prefers Hive more and has converted HBDs to Hive. Alpha on other hand chose to power up large amount of HP. Well played!

Hive has many different options for investors to consider. As I have stated in the past my preference as this time is HP as well. But there are many investors in the world that like to diversify their portfolios and would like to included less risky assets with steady earning like interest. For them HBD can be a great option.

Just because Mika and Alpha are not interested in only 10% APR anymore, doesn't mean others are not. If you look at the list below we can some new names that are trying out HBD Savings. Number of accounts using Savings has increased a little bit too.

Now that we can convert Hive into HBD, this has caused the supply of HBD to grow higher than normal pace. It must have gone above 10% ratio against Hive supply in value. Because yesterday author payouts stopped printing HBD, and all payouts are not in HP and Hive.

Another interesting phenomenon I noticed in this Hive to HBD conversion is that there is double effect that causes HBD reach and go over 10% Hive supply ratio. When you are converting Hive to HBD, Hive is destroyed and HBD is created. We have Hive supply decreasing and HBD supply increasing at the same time. I don't think it is good or bad. Just interesting. If decrease in Hive supply causes for its price to go up things will get balanced out.

I am not making any more predictions for the following months. But will continue to monitor and show you where the money is. lol.

Yep 👍
The APR is a good deal, but of course some people prefer to keep HP instead of hbd in saving, when we keep in mind that the Hive blockchain is trying to stabilize the HBD to $1 and the Hive price is keep on going only up 🆙
So I see it as one of the reasons why there are not many hbd savings in that case...

I think while some people wants to continue earning the 10% on HBD, it's quite dicey. First hive may be primed to do well before December and HBD will more or less be pegged, so I'm guessing Mika and the other guy are trying to see if they can hold hive and probably take advantage of the prices. It's just a theory, I'm always in this dilemma too.
Let's see how the month of October will turn out then.

I agree there can be bigger gains on Hive by the end of the year if things work out as many keep saying about Bitcoin.

Is this when we put HBD or HIVE in savings here in Hive?

Yes, this is when you put your HBD into savings in your Hive Wallet.

HIVE into savings doesn't do anything besides make it a bit safer from hacking (takes 3 days to take it out, during that time you could theoretically get control of your account back and cancel the transfer). HBD into savings pays interest, currently 10% per year.

Alright. Good to know then.

One thing I am still not sure about - do we get interest on both HIVE and HBD in savings, or only for HBD?

Haven't tried it too so I have no idea. 😅 Saving must be like staking it that's why it can earn interest.

Wow, This was really great and quite impressive.

I like to see such amazing progress here on #Hive.

I wonder why people would want to convert HIVE into HBD when HBD is below the peg. I thought it would be the under way around if people want to take advantage of the arbitrage.

Those conversions probably happened when hbd was above the peg.

Greetings @ geekgirl
Let's hope that the HIVE will behave in a better and more profitable way for everyone. Thank you very much for sharing