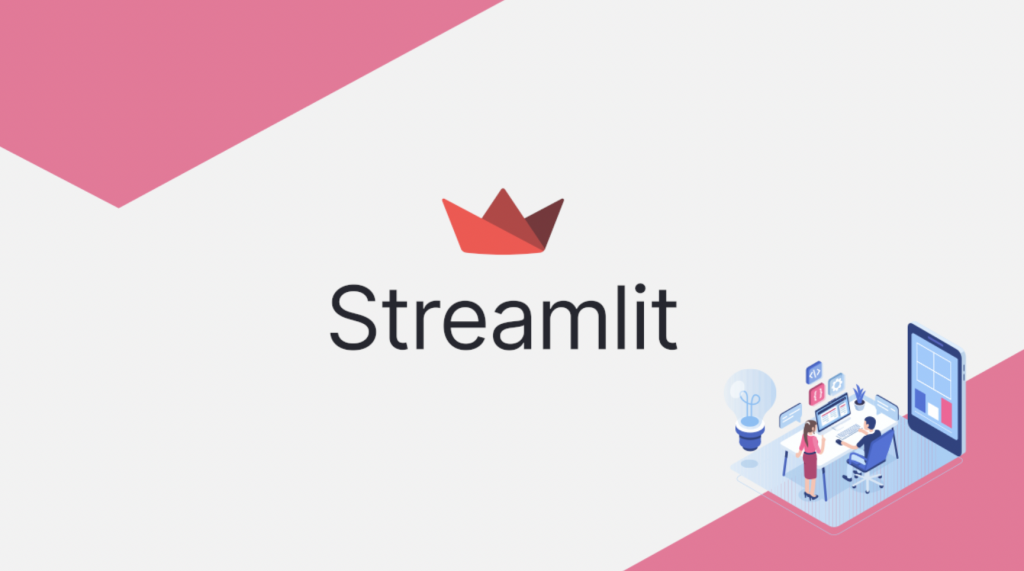 Last year when I first started using Streamlit, I had to share my initial experience here on Hive. If you would like to read the post and see how fast and easy it is to get started with Streamlit, visit Streamlit - The Faster Way To Build And Share Data Apps. Since then I have been using Streamlit a lot, both for Hive projects and projects outside of Hive.

When I say I have been using Streamlit a lot, I mean the end result, and not the time spent on coding. The best part of Streamlit is it helps turning ideas into usable apps in no time. Usually, it doesn't take me to develop something for automating or reporting more than 2 days. However, my projects are usually small, and focused on specific and repetitive tasks.

What does Streamlit do?

It is a web framework for python based project. It converts python code into a web app that can be shared with anybody. This makes it a really useful for prototyping python projects. It was designed for data scientists, data analysts, and and everybody who work with data. It shines in presenting data analysis and visualization in a simple, yet power way. The idea behind it is that for python coders to focus on the goal of their project and spend smallest amount of time in creating a web app to share with teams, clients, and others who may be interested in the data presented.

The Streamlit team does deliver on this promise. It doesn't take much time in writing code for a Steamlit App. It become even faster once the initial configurations are set up properly. After the initial setup, any optimization and improving the code is only done with focus only on the purpose of the project.

I used Heroku to deploy my projects. But Streamlit has its own sharing platform as well, and they can host apps just like Heroku does. When I deployed my first app, and shared about it here on Hive and Twitter. Streamlit team noticed it as well and included among featured apps of the week. 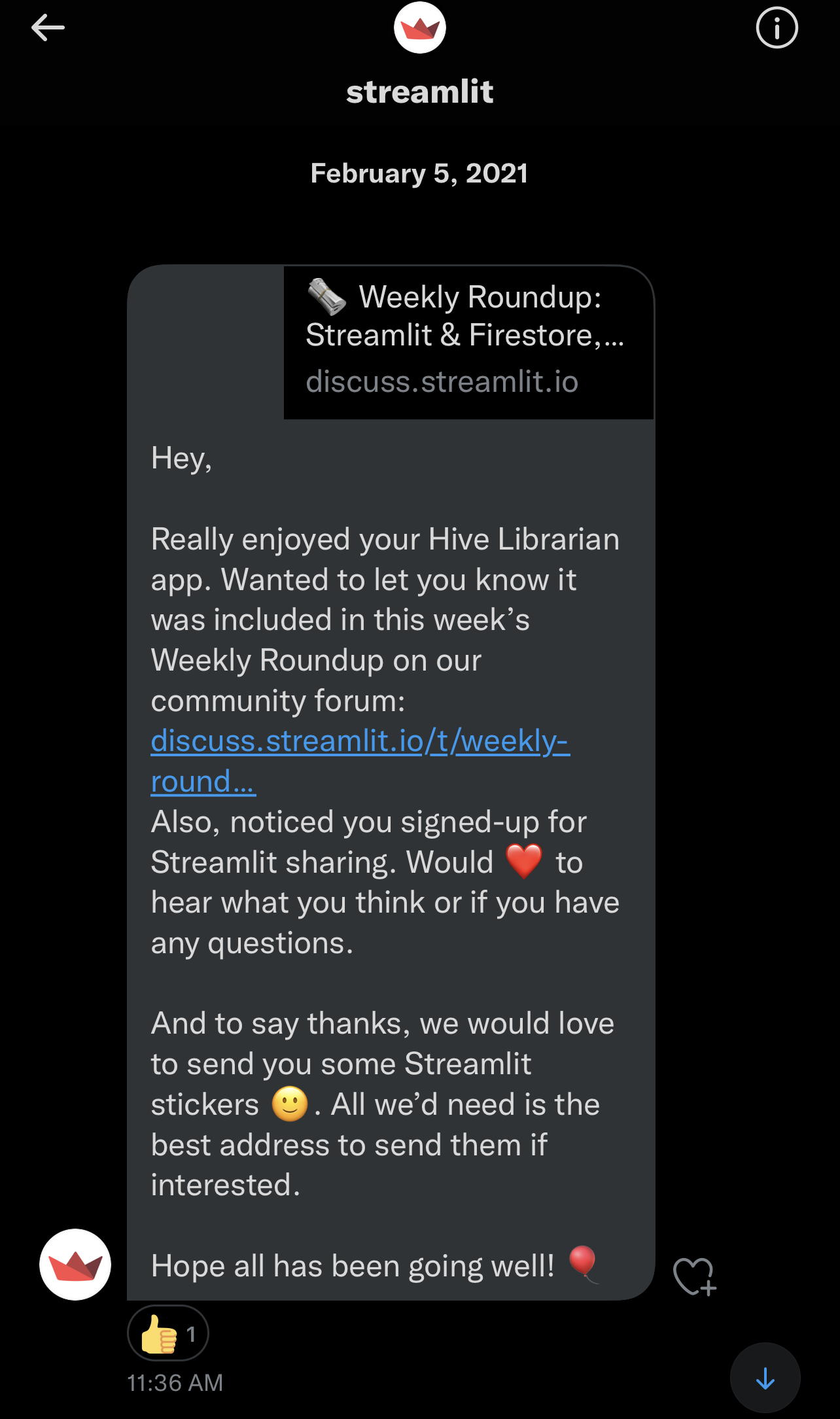 While original idea for Streamlit was to provide tools for data analysts to streamline their work, the creative use cases by the Streamlit community members demonstrated that Streamlit can be used for many different purposes. It can be used for general purpose apps, finance and crypto based projects, educational and entertainment purpose apps, etc. I initially used for my Hive Librarian, and Hive Search apps. Then I ended up creating personal use apps that extract data from pdf files, automate repetitive tasks, etc.

First, to use Streamlit in python projects, we will need to pip install streamlit. The team has been continuously adding new features and making the framework even more efficient and powerful. To stay updated with Streamlit's new features we will need to update the dependency on our machine's too. However, sometimes these update may cause the old project behave differently and not as expected. It is advised to test after updates, to make sure everything is working as intended. I normally don't update, if everything is working ok. Why fix something that works? On the other hand it may be more useful to use the most updated versions for the new projects.

When developing a Streamlit based project, two of the common ways to deploy them fast and for free can be via heroku or Streamlit share. I used Heroku when I started. It has been working ok. I tried both free and paid versions. For a small or personal projects Heroku's free hosting may just be enough.

When developing an app, we can run streamlit run appname.py in terminal and it will run the app locally and open in a default browser. The cool thing about is as we make changes in the python code we can see the changes in the web app right away, while it is running. The easy way to deploy the app to Heroku I found is first storing everything in a GitHub project. This can also help with sharing the code, if the project is open source.

There are few files that we need to make sure exist in our GitHub project.

The Procfile will have one line as following:

Replace the .py filename with a filename of your App.

Inside the requirement.txt we need to place all the modules/dependencies we used in our python script with their version numbers. Like this:

And of course we need to make sure that we have our main appname.py file, which will contain all the python code.

After everything is ready in GitHub, we go to our Heroku page and create our new app by clicking New and then Create new app. After giving a name to this new app, under Deploy tab and Devployment method we need to choose Github. It will ask for a repository name, and connects to it. Once, everything connected we click Deploy Branch at the bottom of the page. If everything goes well, at the end it will show a link to the App.

Every time we make changes or updates to the app, we will need to update GitHub files and repeat Deploy Branch process in Heroku. Just like that updates will be applied to the app.

What to build with Streamlit?

It works great for data visualization, especially if this needs to be shared with multiple people. However, it is not limited for data based apps. I was able to create two Hive based apps:

Some of you may have used them already, as I have written about them in the past. Both of the use HiveSQL to get the Hive blockchain data. Hive Librarian is more of a collection of tasks. Here is the list of tasks it can do:

Hive Librarian Search is a tool created for curating purposes. It helps with searching Hive posts based on curator's parameters. There are actually too many parameters to configure. Most won't need them all. Among the common ones are the reputation of the account, pending post rewards, when posts were created, topic or category of the posts, include/exclude tags or words, etc.

I also use Streamlit for crypto and stocks related projects. Another project I use Streamlit for is extracting data from pdf files. It is a great tool to prototyping testing various ideas and have a running web app in no time. However, don't expect to create the best website and web app with this. There are better tools available that are more suitable for web development. Streamlit is for projects that don't need a lot of time and efforts in web development. If Web design and the latest web trends are of highest priority, then perhaps other frameworks would be better option.

P.S. As I was finishing this post I realized that the apps I mentioned above are currently not working due not being able to login to HiveSQL. HiveSQL is probably going through some maintenance. Please try them later when HiveSQL is back online.

Nice to know more about Streamlit and this is my first time when I'm reading about this. It has own sharing platform that sounds really very impressive.

It is really useful. They keep improving it. It will become one of the top python tools.

Yasssss some cool stuff being built on hive 😍 will have to wait on Hive SQL though looks like it's still kicking out some errors. Loving the development work though and curious to see what else you have in mind to build.

Congrats on the upvote! At first I reat Steemit I was like what?
I don't know the first thing about coding, but your app looks awesome!

Nice post and very informative, it's cool know more about streamlit to to get more advantages about it!

awesome! probably very helpful for those who want to simplify python a bit, I've seen a few websites you have created and it's pretty lit!

I am fan of data visualization applications such as HiveStats. I may use them in my progress reports. Thanks!

Streamlit is best free data app to easy represent results, but I'm not sure if it can build difficult interactive patterns, I think it's complicated

Streamlit is easy and best data app so far because one of my friends is using it and he told me that is good to use.

It sounds like a great app that can easily transform python code into a web version. Is it only for python?

It is not an app. It is a python library with simple code lines to convert text to markdown and html, display charts and tables and render them all into website.

Ah, that was my mistake

Streamlit is a good app. It's a python based project so that's great. As python is easier to learn than other codes !

I love Streamlit, it is amazing for how easy to use it is. A few things I wish they would change, but it is really slick. I wish I was doing machine learning again as this would have really come in handy.

Sounds like a great tool, and I'll certainly check it out! I'm pretty buried in a rather massive ASP.NET project at work, without really having a developer background to start with myself – and anything I do is very time consuming and mostly gibberish to everyone, as there certainly aren't any other developers around most of the time. Quite stressful to be on your own little crazy island, where no one really knows what you're working on, but still got all sorts of (often extremely outlandish) expectations.

A fast and dirty way to display some data for internal use can certainly become very useful, and also could help with getting a few others more involved in the project in a meaningful way. Thanks for sharing, and for the nicely written introduction with examples and references!

I'll have to do a crash course on Python first, but it was already on the "todo list" anyhow – and I've heard it's supposed to be very fast and easy to learn compared to other languages. This will be an extra motivator to force it into my schedule, and bookmarked the post so I don't forget. Will try to throw something simple together with HiveSQL in the near future. 😛

I’m sure with an app like Streamlit , data scientists all across the world will be grateful for this innovation at it is a free, open-source, all-python framework that enables them quickly build interactive dashboards and machine learning web apps with no front-end web development experience required.

Gosh this is all so over my head, I wish I COULD use steamlit but I think any aps I made would have to be of the food variety haha. This all looks so interesting tho and the more our lives move in and online the more I'm always intrigued to learn more.
I know as an artist, my work is often digital (but it happily melds with traditional) and I think how seamlessly it's worked it's way into my studio. I think the more I can understand the digital the more I can happily live there successfully.
All very interesting stuff @geekgirl

very interesting and useful. Thanks for talking about it here. :)