Blimey! I Won Over 50 Chests At Bronze 1 With Earth Focus 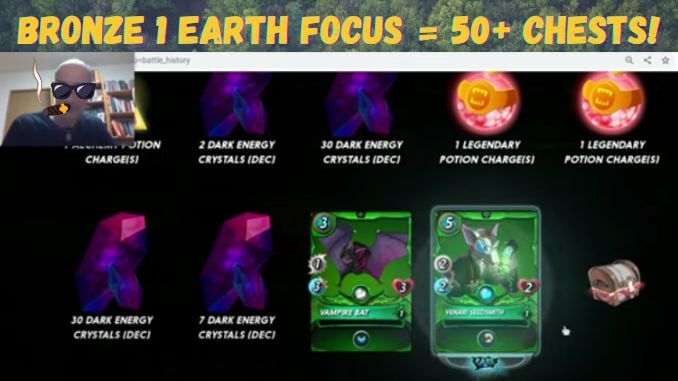 I had a completely free day to myself on Saturday and I was pleased to see that my Splinterlands "focus" for the day was "Earth," which is my strongest splinter (speaking as a Bronze I player).

Until then I hadn't played many focus games because the 24 hour duration of each focus seemed too much for me, compared to the old "win five times" challenges.

Also, I'd read some of the inevitable negative comments about people hating the new system because... they weren't winning as many chests as before.

However, as I played game after game on Saturday morning I noticed that I was winning season chests as well as focus chests, and that I could win season chests even when I was not playing my focus splinter.

By the end of the day I'd won far more chests with the new set up than I ever won playing the old challenges.

Maybe the moaners are in higher leagues where things have probably got tougher as more people invest in upgrading their decks.

Even if I only play for an hour or two a day, I think I can still win more chests per day than I was winning in the previous version. The most chests I'd won before was nine, whereas I ended Saturday with 53 chests. I won 16 of them playing the focus splinter and once the session was over I was able to open them...

Here's what I won:

Not too shabby at all for a Bronze player!

How are you enjoying the new version? Let us know in the comments.

Congratulations! The rewards in Splinterlands are very good right now, hopefully it will have an effect on the influx of players to the game!
!PGM
!CTP

Thank you, @stdd - judging from the number of likes and comments my YouTube video and blog post got, it seems there is a lot of interest in Splinterlands right now. 😀

Thanks for the tip.

Great job. I think the new system will allow mid to low players to add to their collection power faster. Some may need pointed out that they are losing x% for using the free cards. Managing that with a few rentals of lvl 1 summoners for .1 dec/day will reduce the penalty.
!PIZZA

Wow, 50 chests is a phenomenal winn. Today is your day to buy a lottery ticket. Thanks for sharing.

It's great to see a fellow Bronze brother do well. Congrats!

Wow 50 DF chests! I was happy with my 16. I wonder what happened to your ECR?

Good job mate,when you move up the levels the matches get tougher to win.

All the best for more. From Listnerds. Congrats on the chests. Splinterlands is now giving a fair chance to good players like you.

I love the glasses and cigar! Do you smoke cigars often?

Only when I'm on a roll!