Coinpot and Partner Faucets Closing Down... 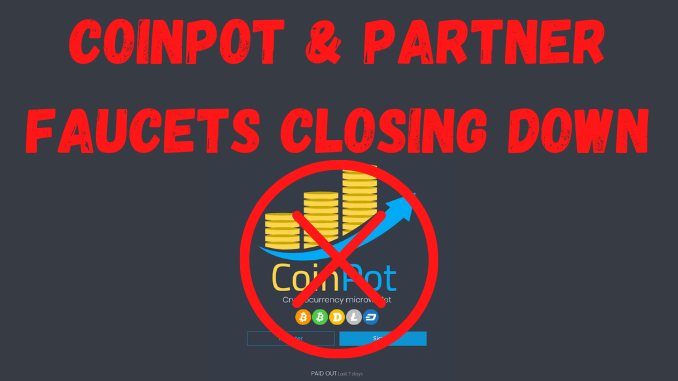 The Coinpot faucets were my introduction to to the world of crypto. I started accumulating satoshi and altcoins on the CoinPot faucets in 2019 and created an email series showing others how to do the same, which in turn generated a lot of satoshi commissions for me on the same faucets.

In recent months faucet have become much less generous in the satoshi they dish out as the price of Bitcoin has gone up, so it takes a lot longer to reach the withdrawal thresholds and reduces the incentive to gather satoshi every day.

Nevertheless, earlier today I popped over to BitFun to claim a few satoshi. When I landed on the faucet page I saw an ominous looking notice that said Coinpot and partner faucets were closing down... Could it be due to declining traffic to the faucets these days?

I logged in to Coinpot to find out more...

Sure enough, there was an announcement that confirmed the news:

"We are sad to announce that CoinPot and our 7 partner faucets will be closing down over the next few months. This decision has been made with a heavy heart for the reasons that we have detailed below. As always we are fully committed to our loyal and fantastic users and we will ensure that you have enough time to make final faucet claims and withdraw any remaining balances."

So it seems that Coinpot are doing the decent thing by giving everybody enough time to withdraw their funds from the site.

Which faucets are closing down along with Coinpot?

However, Coinpot will continue to be available for people to convert coins and make withdrawals until 28th February 2021.

So Why Is Coinpot Closing Down?

Apparently it is because of a lack of time or resources to maintain the faucets, and also because the team behind Coinpot wants to spin off in a new direction.

As part of the business of running Coinpot, they have had to develop a complex fraud detection system:

"During the last few years we have built an incrediby complex and successful fraud engine that analyses users claiming patterns and looks for fraud/bot usage. This grows constantly with new techniques to fight the bad guys! We are extremely proud of how this fraud fighting works - and it is this part of the CoinPot system that will live on in the future..."

And here is the real nugget buried in the news:

A New Project Built Around The Coinpot Fraud Engine

"Starting from next month we are embarking on a major new project which we cannot reveal too much information about right now. It is within the crypto world but totally unrelated to faucets, and it will be built around the CoinPot fraud engine and all the knowledge we have accumulated from this over the years."

Sounds like they are moving into the crypto-security market and who can blame them! I expect there is far more potential for profit in that market than in fiddling around with faucets!

So I think we can now say that "faucets are dead."

Time for me to create a new training course for my newsletter subscribers, and to update the crypto downline builder on my traffic site, https://elitedownlinebuilder.com !

For sure, there are a lot of new and exciting developments that can replace and outperform faucets in 2021 and beyond...