Now For A Contrarian Perspective On Bitcoin From My Man Nassim Nicholas Taleb!

I'm a big fan of Nassim Nicholas Taleb and have read and/or listened to several of his books.

I was reading his book, "Antifragile: Things that Gain from Disorder" this time last year. Influenced by what I'd read, I began to take steps to build some "antifragility" into my life, just in the nick of time before you-know-what disrupted everything.

The Sheep and the Goats

As you spend more time in the Talebian universe you soon realize that NNT likes to sort the sheep from the goats and loves a bit of a punch up. It's one of the things that makes him so enjoyable to read, whether it's his books, or his latest spat on Twitter. He goes for the jugular, and as long as it's not yours, you can sit back and enjoy the spectacle.

He coins amusing epithets such as "fragilistas" (who mistake what they do not understand for nonsense), and delightul acronyms such as "IYI," which stands for "Intellectual Yet Idiot." For a full account of your typical "IYI" see:

So when, earlier today, I noticed NNT taking a swipe at Bitcoin, I took note!

Here's what he tweeted: 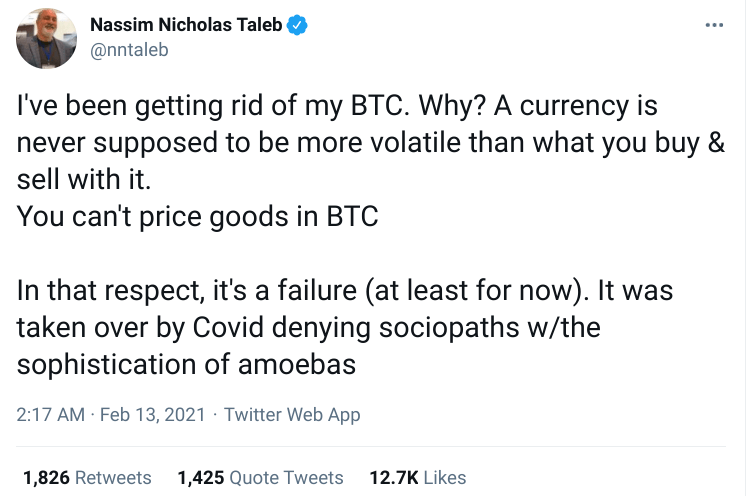 It's a classic contrarian posture, isn't it. You get the bald statement about getting rid of BTC, nice and short for shock value. Then you get the statement of dogma and it's application to BTC. Note, however, the judgment somewhat steps back from the absolute. Finally, there is the signature Talebian tendency when the blood is up to go totally OTT! LOL!

In a follow-up tweet Taleb presses the point that the volatility of Bitcoin is not dropping with time or price appreciation: 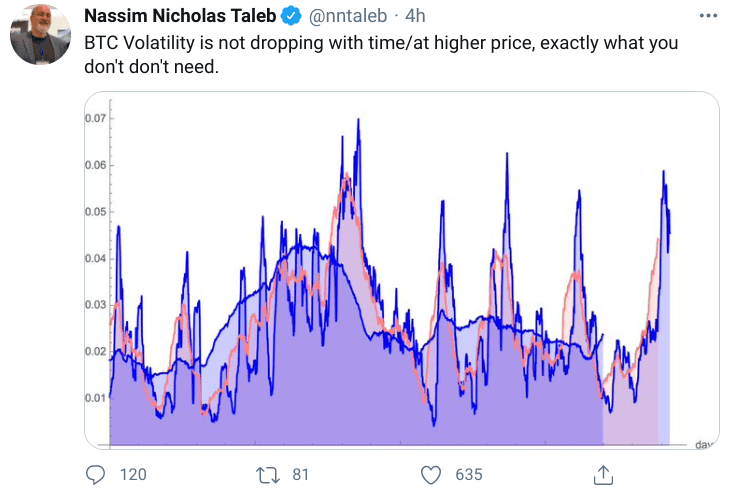 A Talebian protege then linked to a useful lecture on drawdowns over the last 200 years to argue by parallelism that Bitcoin volatility is here to stay. 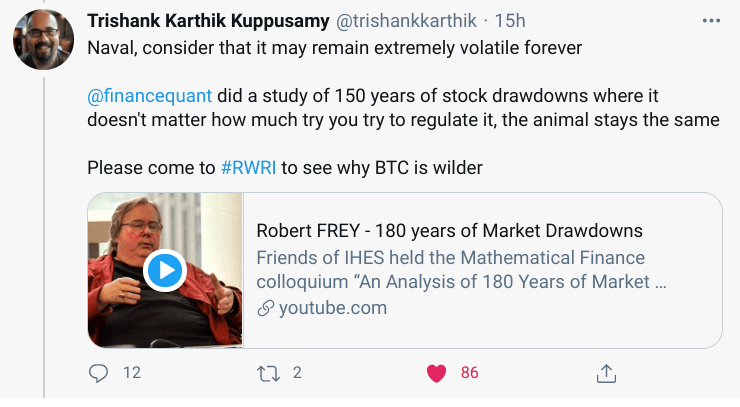 (The talk is worth checking out if you suffer from belly ache every time your trades go into the red! See: https://youtu.be/27x632vOjXk )

Some Thoughts On Taleb's Turn

Taleb has not always been against Bitcoin. He has spoken about it in positive terms as an asset that takes control away from bankers.

However, he got into a spat with a "Bitcon maximalist" who is also a Covid sceptic over his position on mask wearing and taking early measures against the pandemic. I think it is this that has engendered the worm in the rose. Consider how the "failure (at least for now)" of Bitcoin is directly tied to its being "taken over by Covid denying sociopaths" as if THAT were the cause of the "volatility not dropping". With Taleb, hugely insightful rational analysis often goes together with deeply personal animosities, a volatile combination such that the fat tail ends up wagging the skinny dog.

What do you think? Is Bitcoin too volatile for you?

For anybody interested in the volatility of Bitcoin, here are some articles I checked out after reading Taleb's tweet and watching the lecture about the last 200 years of drawdowns:

****2 Forbes - The Risk of Treating Bitcoin as a Safehaven Asset:**