@hirohurl 64
over 1 year ago
bitcoin

I made a very basic #rookietrader error yesterday. I ignored the obvious bit of news and it's implications for the crypto markets!

For that I should borrow Trump's nickname for Joe as Joe doesn't seem to need it anymore. Call me #sleepydave! 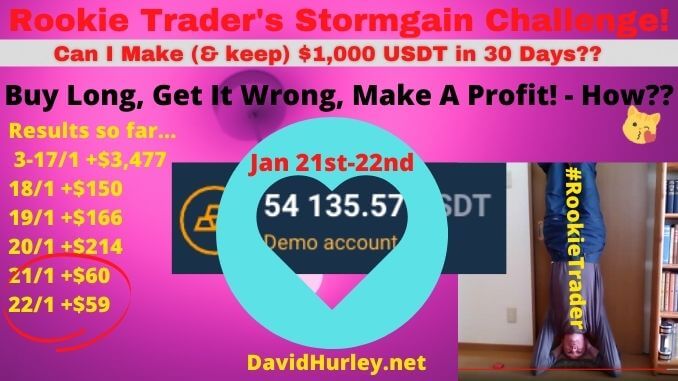 Anyway, where was I?

Well, I wasn't in the basement, but that was where Bitcoin prices seemed to be heading, and there was I with a nice little long trade for a blasé $500 with 11x leverage that I bought on what looked like a little bit of a dip! (ﾉﾟοﾟ)ﾉ

Bitcoin spiralled down to the lower $30,000s, and as it did so, the "Auto Invest" kicked in several times, and this is the secret to success PROVIDED your starting position was 1% or less of your warchest.

Each time the Auto Invest chucked in some chump change, it did so at a lower price (obviously), so that when a mini-rally kicked in, the position quickly went into profit.

I noticed when it was around $85 in profit, but by the time I reacted the mini-rally was over and I closed out for a profit of $60. PHEW! The enemy's guns were spiked!

But Here's What You Can't See

It was a long trade - I was expecting prices to go higher simply because of the underlying bull market ("don't fight the bull!") but had not thought about what the impact of the Biden Inauguration would have on prices. Duh!

And yet, for all that, I was able to make a profit on the trade even though I closed it out over $2,500 LOWER.

Let me say that again:

I was able to make a $60 profit on on a $500 long trade (buying the market, expecting prices to rise) even though I got it COMPLETELY WRONG and closed it over $2,600 LOWER than when I opened it! How crazy is that?

Friday Was A Much Easier Day!

Today, with markets trading sidewaysish I just did a couple of little scalping trades, going long each time.

Come along for the ride as I try to learn how to trade my way to a profit and keep hold of the loot!

If you are an experienced trader, any advice would be welcome. Let me know where I’m going wrong, or post some tips in the comments below.

Looking for a safer way to accumulate and store bitcoin?

Disclaimer: I am not a financial advisor and this is certainly not financial advice. Simply the musings of a rookie trader playing with pretend money on a demo trading account…