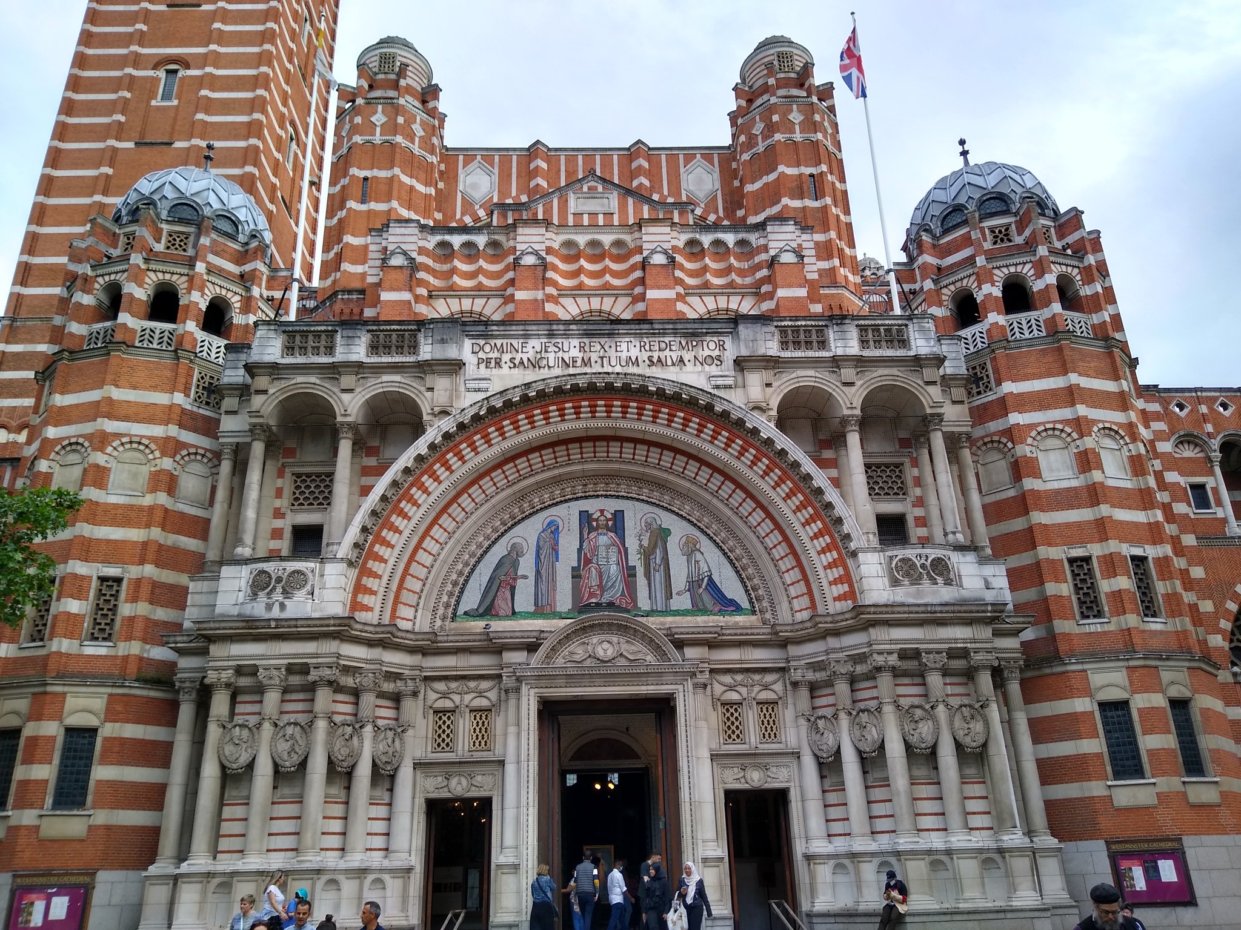 It was sat back from the road in a gap between some other buildings, and we were quite stunned when we saw it. The Byzantine influence in the design is quite evident, and the beautiful red and cream brick pattern is fantastic. 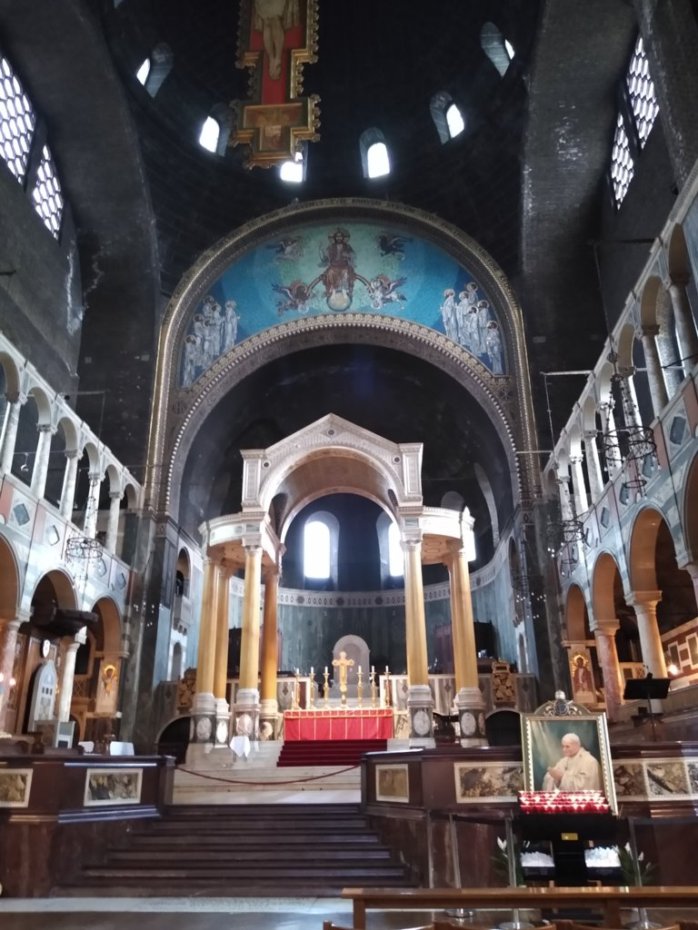 The inside was quite surprising for a number of reasons. The first being that the main ceiling parts are black (or dark brick colour) which I did not expect, so it was darkish in places inside which affected the pictures (they didnt all quite come out). 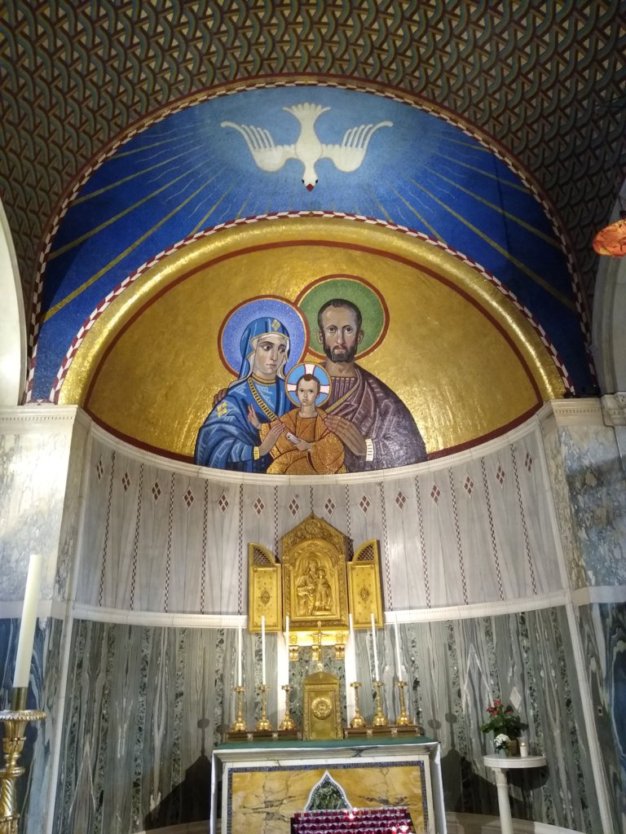 And the mosaic work is just astonishing. I've always really liked mosaics, especially Roman, and these are in the Roman Christian style, also reflecting what may be seen in some older Roman Byzantine churches. 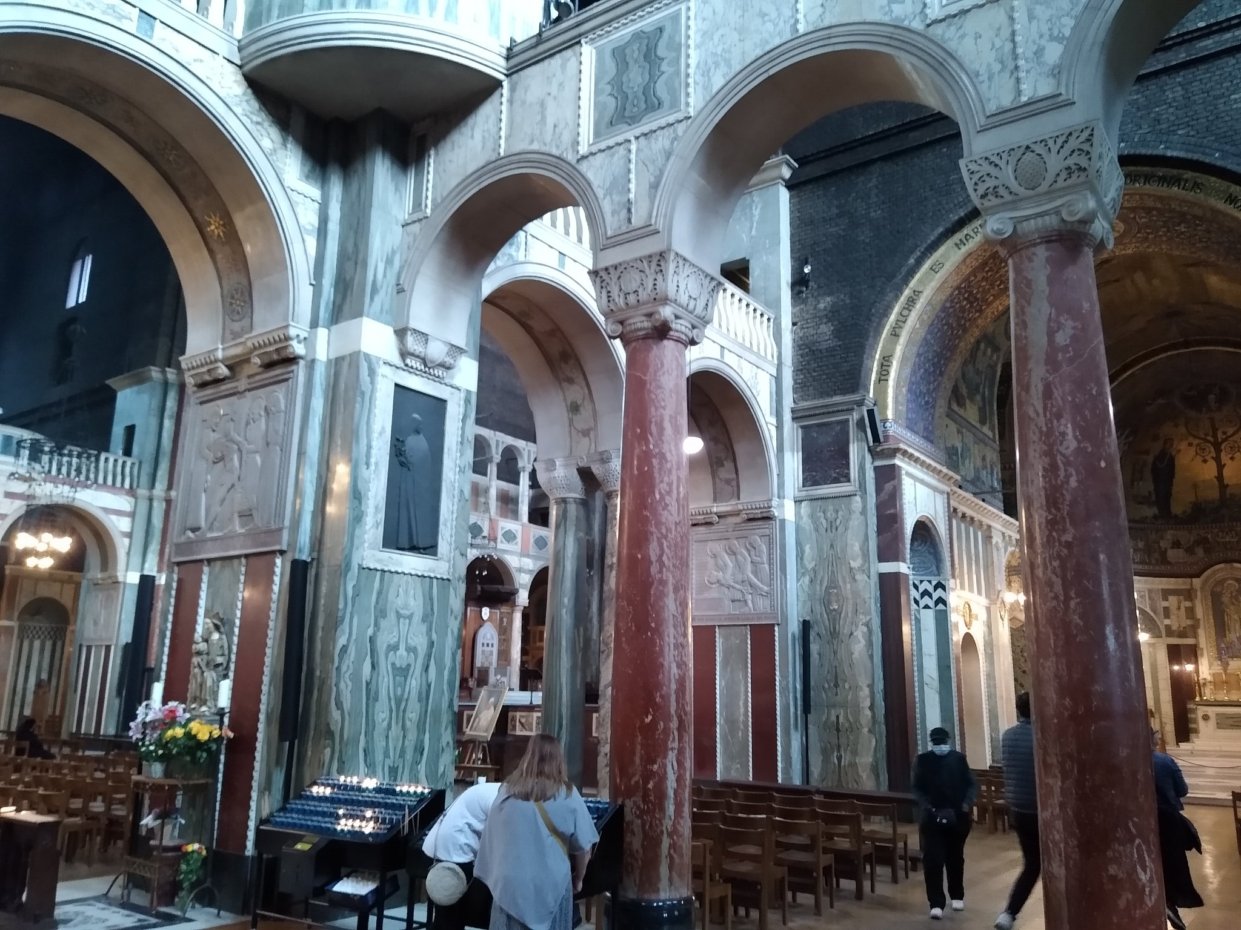 The inside was also clad with quite a lot of marble at ground level, in various colours including green, red and yellow. Again making it stand out quite a bit from other British cathedrals. 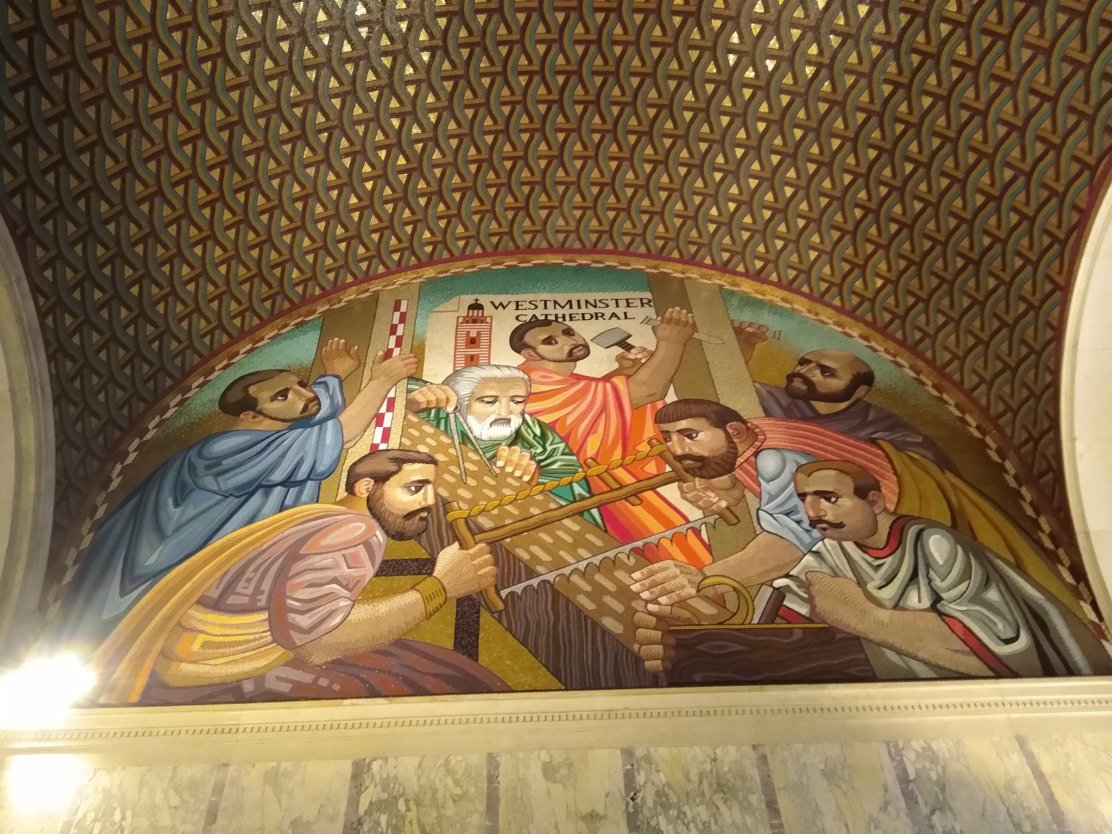 The mosaics really were the highlight for me. I've not seen any as good as these anywhere else in the UK. 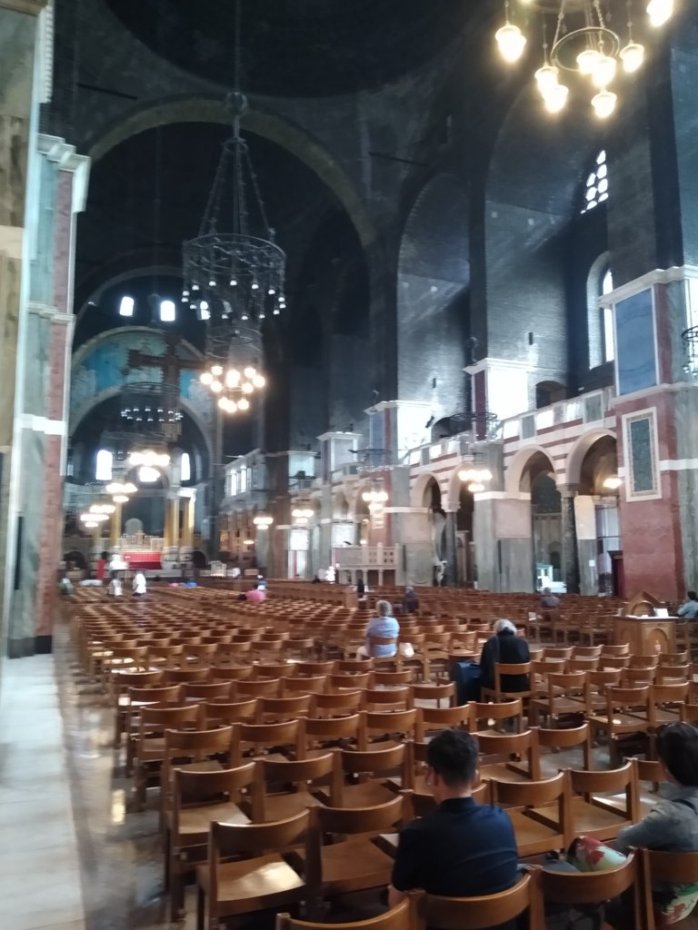 Its also a relatively young cathedral, with construction starting around 1885 and finishing in 1903. Again in the pic above you can see the surprisingly dark ceiling. 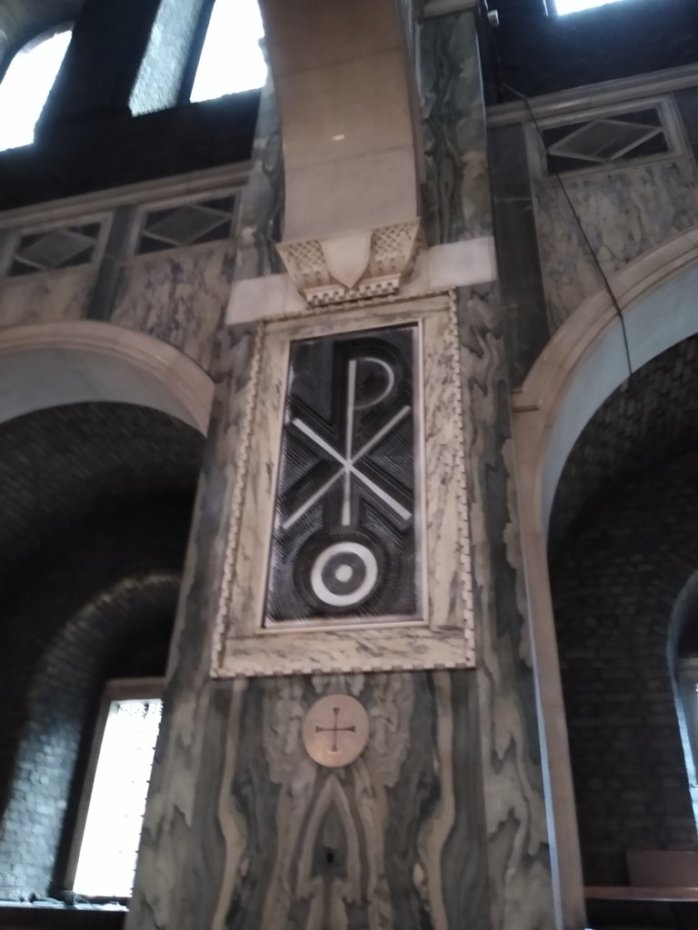 Above is quite a nice installation of the mark of the Holy Roman Empire. It was a sort of 3D profiled mosaic (sorry, quite hard to describe). I still find these marks regularly - who said the romans died out ?! 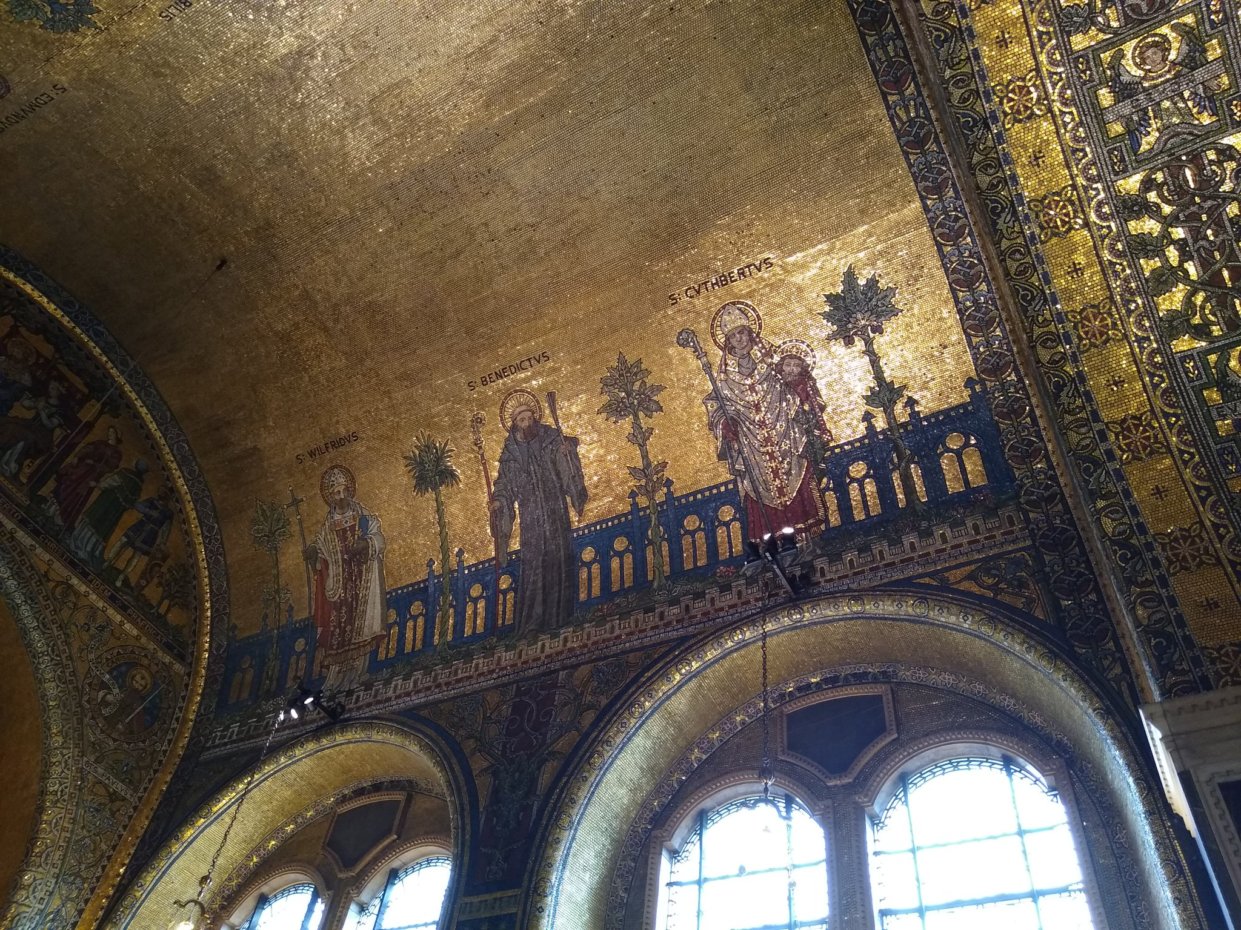 I loved the gold tiles in the mosaics above, and you cant really see it in the picture, but it curved beautifully around the edges of the window frames - such craftmanship. 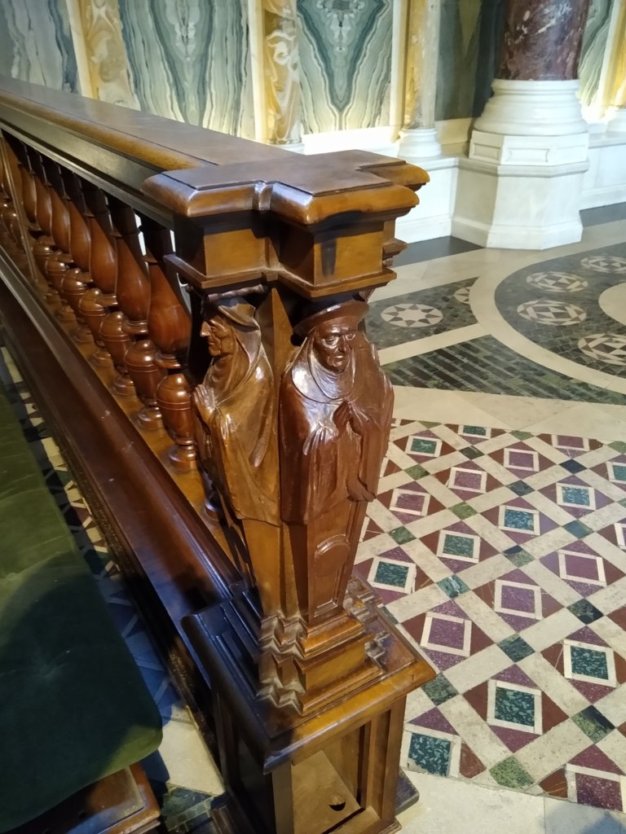 And you can see a bit of everything in the pic above - fantastic wood carvings in the rails, beautiful marble in the walls and lovely mosaics on the floor. 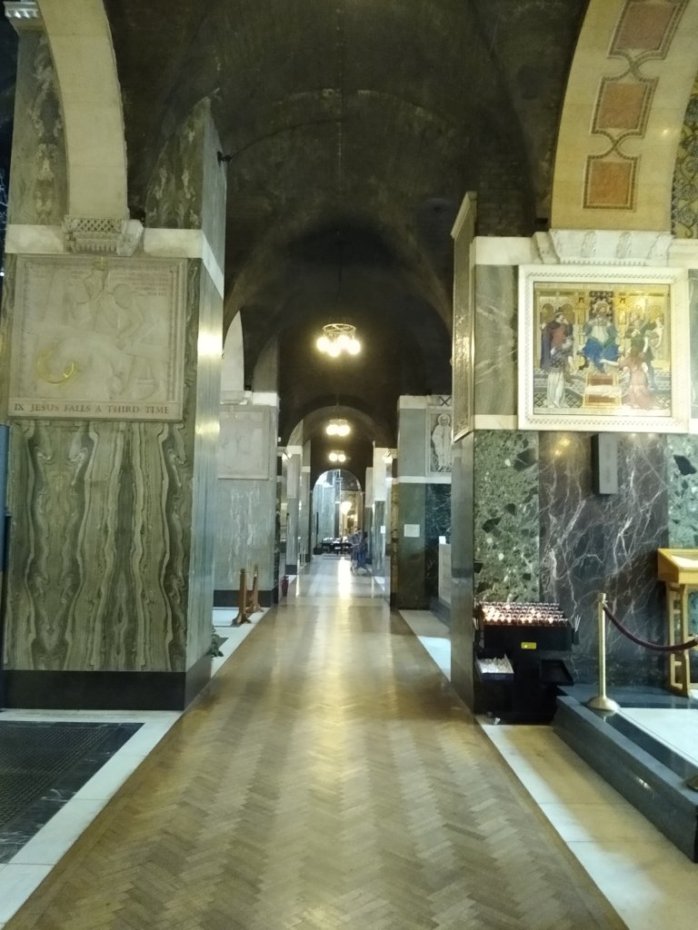 It really was the find of the day for me, and I will definitely go out of my way to visit it again. It is so different from other cathedrals in UK. 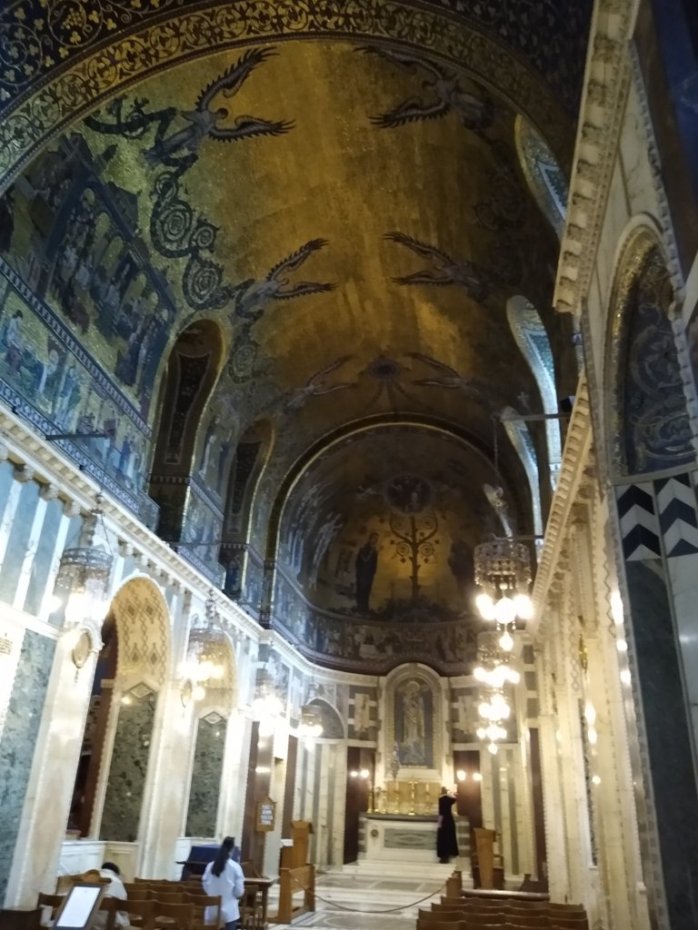 If you are looking for something different to see in London that is not so widely touted on the usual tourists lists - then I'd highly recommend you visit Westminster Cathedral. 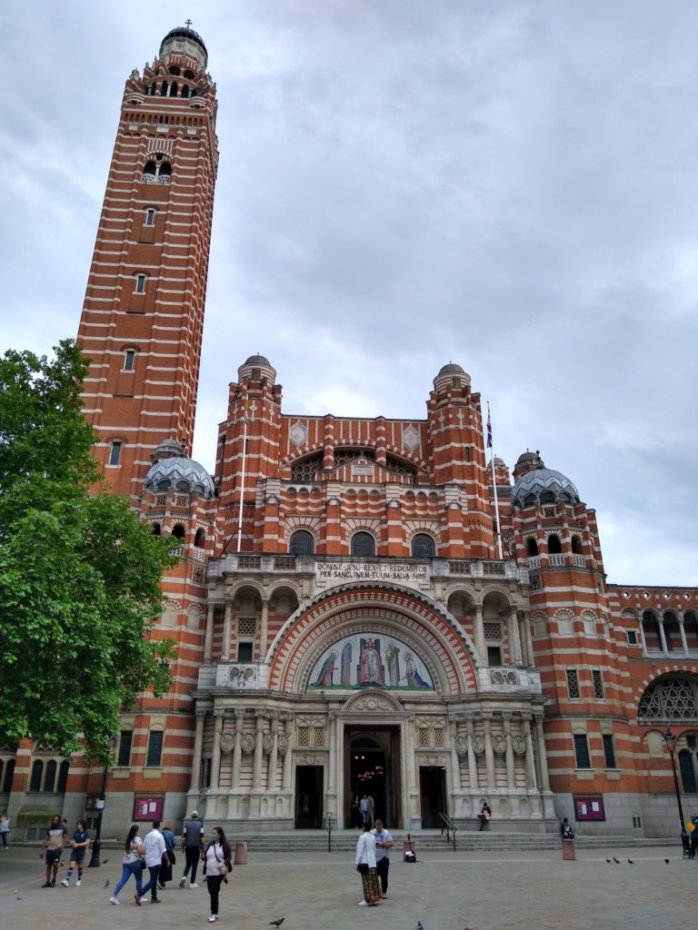 Hi @hoosie,
Thank you for participating in the #teamuk curated tag. We have upvoted your quality content.
For more information visit our discord https://discord.gg/8CVx2Am

This Westminster Cathedral is really impressive and gigantic. I have visited some with neo-Byzantine style in the city where I live but never like this one you share with us. In addition, its interior has many details and many mosaics that surely its realization was very arduous. I am very struck by the fact that the cathedral has only one tower, it looks a bit asymmetrical but it is very interesting indeed 🤩 Amazing!

Thanks - it is the largest roman catholic church in the UK, so that fits ! It really was well worth the visit.
!ALIVE

Thanks - it was pretty special !

Many thanks for the share, it really is appreciated !

so many beautiful gems around London just waiting to be discovered. btw, is London having some effect on you? Your images aren't normally this blurry....

Yes, London is full of things to see at every turn - I love it.
I've been moving around a lot in London, and maybe I'm not taking my time with the pics - I only have my phone with me, so it could be that although with the dark roof, the light levels were low in the cathedral.

So unexpected to see this kind of architecture in London! The black ceiling is weird though, but the golden mozaic make up for it! Splendide!

Aye, it was quite a surprise, and we loved it !

Hiya, @LivingUKTaiwan here, just swinging by to let you know that this post made it into our Honorable Mentions in Daily Travel Digest #1577.

We have returned from London this week and it is one of the places I wanted to visit. Did not make it, unfortunately.
I have been here years ago and I was really impressed. And you are right, it is different from the abbeys around the UK. Absolutely beautiful!

Aye - its fantastic, it was a real find for us this week !