Due to the massive Quantitative Easing (QE) activities of governments, the fiat money has been losing its trustworthiness and purchasing power. With the increase in the Covid-19 cases around the globe, the countries closed their borders and the whole world economy went through the side effects of the halt in the world trade.

The primary solution being implemented by the governments was to print more money to distribute the people. Though it was one of the most effective ways to cover the side effects of Covid as well as corrupted / unsustainable monetary system, the printed money gave birth to rise in prices. 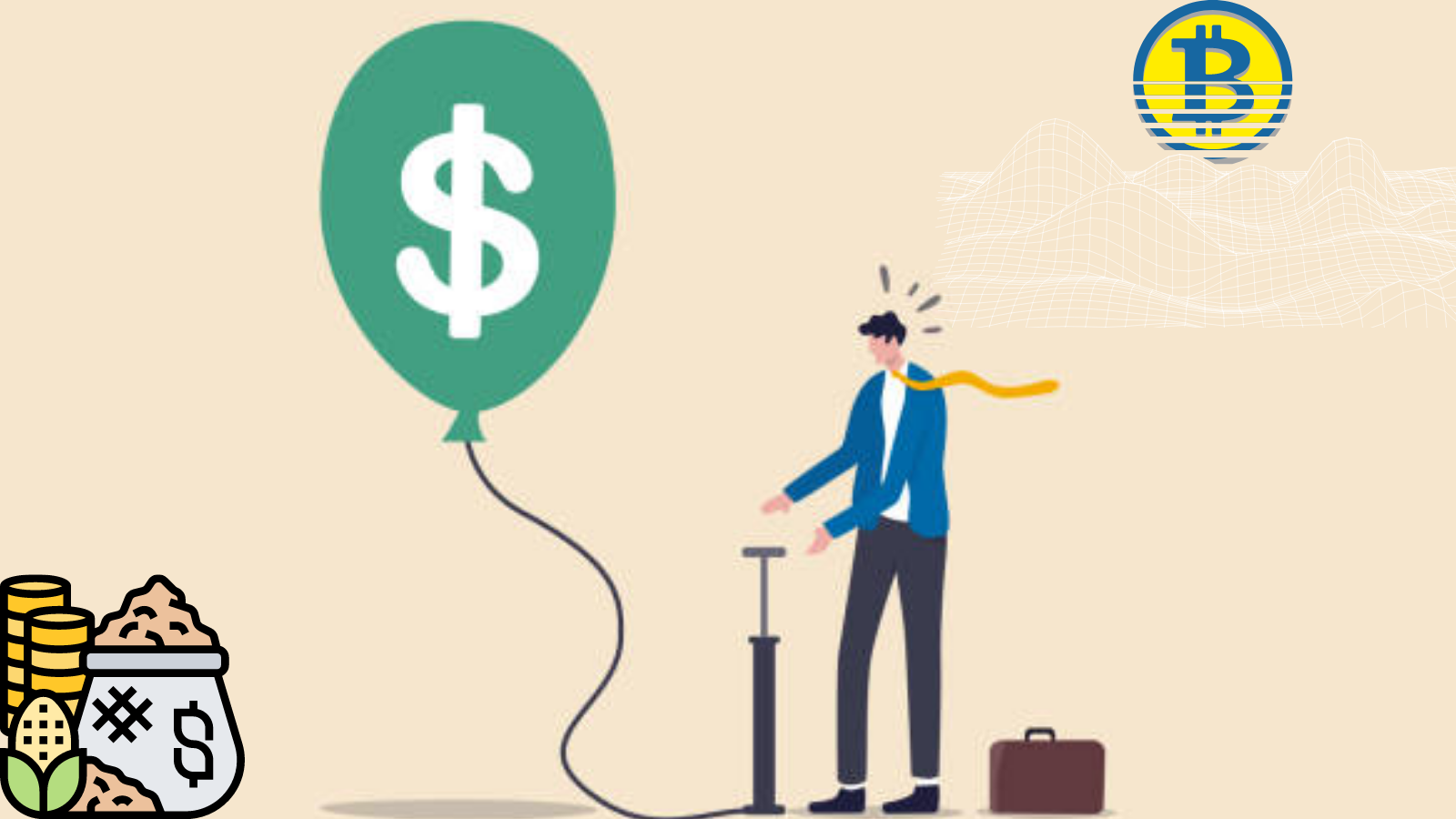 From Developing Countries to Developed ones

The wave of inflation does not seem to be a local trouble to be fought. Starting in the "developing" countries, today we are witnessing a similar cases in the well-developed countries. The Butterfly effect of the inflation is likely to be more visible and bothering in 2022 due to the rising prices of manufacturing and the increase in the price of fuel.

Basically, the production price + expenses on transportation + profit = the price for any commodity. While the luxury ones were always beyond the reasonable threshold, the increase in the price of life-sustaining food (sugar, salt, flour etc.) and the increase in the price of rent will trigger an expectation from people to get paid in more money. However, this is the point that the ungovernable inflation monster ruins the balance of local economies. Followingly, the domino effect is enough to let global economy collapse... 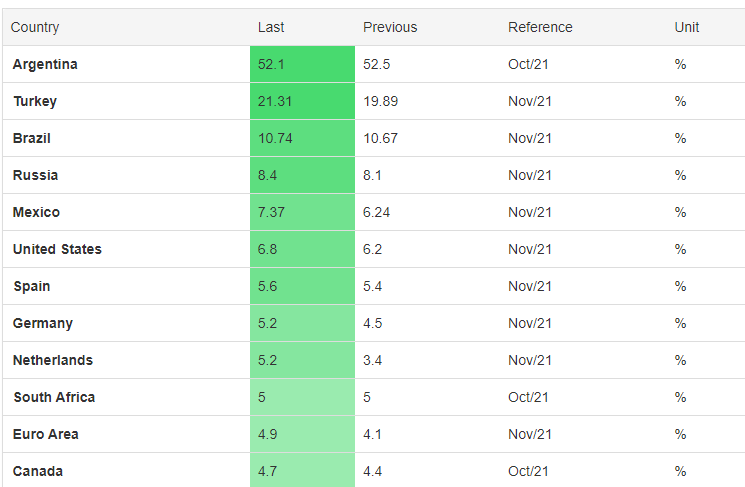 In this chart, the inflation rates in G20 countries are compared in terms of the rates with the previous term. What I can see from the chart is the upcoming double digit era for the whole fiat currencies.

Can Interest Rates Cover the Inflation?

I do not think the governments would like to raise interest rates that may end up with slowing down the economy due to the money being kept in the bank accounts. Even though there will be a pressure from people to save, at least, their purchasing power against inflation, the interest rates do not seem to be compatible with the inflation rates.

If people see that their money is becoming useless, where will they put their money to get higher interest rates and hard cap assets?

Crypto, commodities, houses, lands and cars. However, there is no way for money to be stored in the bank account for ridiculous number of interest rates against the growing inflation all around the world.

All eyes on FED

Even if they choose to make it symbolic, I expect an increase in the interest rates for USD by FED. Since the raise in interest rate will bring up less dollar in circulation, a stronger DXY and weaker Crypto make a lot sense for me.

Though this is an "effective" way to deal with the inflation in the short term, there is no way to cease the flowing money into crypto because of the unsustainable nature of the interest - inflation relationship.

Note: Contrary to what we know/ believe about the QE by FED, the facts are mind-blowing. Please check the truth about the money printed by FED the post by taskmaster4450le. Thanks @deepresearch for the insight.

Commodities and Crypto will be the shining stars of 2022 with the massive increase in the prices. The governments will be in search of ways to cope with the inflation in the globe but it already became an unstoppable fact in our lives. The effects of pandemic and money-printing will be more visible in the next year.

The inflation crisis will increase the demand for Crypto and very possibly we will see $100K Bitcoin in 2022 thus it will be a good thing for crypto communities.

During these red days, I lost amount of money that is equal to my 3-5 months of salary. However, I'm pretty sure that it will be compensated within 6 months with regard to the global crisis that is growing ✌

Thanks for appreciation dear @bhattg ^^

But inflation is gonna only affect poor people and those who do jobs. As rich people will also increase prices of their business and we are totally depend upon them. Only one gonna suffer is common people.

I think the ones who earn the fiat currency but for USD will feel the effects of inflation within a quarter. However, the effects will be severe for common people as you mentioned :I

Congratulations @idiosyncratic1! You have completed the following achievement on the Hive blockchain and have been rewarded with new badge(s):

How could you respond to this post which states absolutely contradictory idea?

I have just learned that the money printed by FED is directly related to the investment banks contrary to what is accepted as a phenomenon. Regardless of what the reality is, people / economist review the actions by FED like the operations done by other central banks. Consequently, the markets react to the news coming from them accordingly.

When it comes to the other countries, we see a different story. In the developing countries, the dollarization is exponentially increasing since people lose their faith in the managers of their fiat currency. Since the USD is the reserve currency that is relied on by millions of people in hard times, the existing balance gets harder to sustain. In the vicious cycle of the other countries, they are getting loans in USD, their currency loses its purchasing power against USD, they pay for the loan in USD (more fiat is used for it) and the cycle happens for years. This is what already happens in developing countries (I witness things as a person experiencing) and the waves is likely to hit the developed ones in the macro perspective.

This is what I see/experience and these are my personal ideas.

How about you mate? What do you think/expect?

I live in Poland, recent reporta indicate inflation as something around 6-7%, I don't remember. A lot of YT experts are talking about turkish scenario, since the story is very similar, populist gov uses monetary policies to fund their expenses. Ratio of polish zloty (PLN) to USD or EUR alteady reflects these changes. The other thing is boom on the real estate market and growing costs of energy and transportation, it creates great conditions for inflation.

As for the situation in US it's really hard to say for me. The popular optics is inflation will be only higher, however the post I shared states something completely opposite, and yeah, there is hige demand for dollars worldwide. But can't this popular optics actually change actual dollar value perception in people eyes? This, together with supportive environment might lead to higher than usual levels of inflation, can't it?

My only safe bet seem to be at the moment to stay in crypto untill next highs.

QE does not generate inflation. In fact it actually causes deflation because the bonds/treasuries are all locked up in the Fed and can't participate in the economy (if yields go up, bonds value go down). The global inflation is more in part due to the government and the debt-limit in the US. There is a reason why the government is in a crisis whenever the debt-limit needs an extension.

That makes a lot sense! What many governments do is manipulating their currency to sustain their realm 💁🏽‍♂️ Sad to admit the fact that in developing countries, the printed money is turned into USD to pay for the debt. This is the point where everything gets complicated 🤸🏽‍♂️

Yes because USD is the world's reserve currency. It doesn't help that QE is locking up the dollars so there is less dollars out there for the global economy (increasing its value).

As long as they keep bringing out the magic money printer, more and more funds will keep flowing into the crypto space. Hurts to see entire economies fail like that, but at the same time I will gladly take the upcoming crypto pumps xD

First time ever I never mind my loses in crypto. It is better to find win win cases 🤙🏽