@idiosyncratic1 67
5 months ago
The CTP Swarm

In Hive ecosystem, we have great community tokens that are used and supported by the authentic communities. When it comes to second layer solutions, Hive is one of the most user friendly blockchains in terms of the speed and the fee (0) of transactions.

When we dive deeper, the community tokens play an active role in broadening the ecosystem. For instance, Leo token can be turned into WLEO & BLEO for other blockchains, or ARCHON provides daily drips for the stakers. In this post, I'll be specificly talking about Liotes token and CTP mini-ecosystem.

Since the price of Hive is increasing for a while, the %APR rate of the tokens have been tried to be balanced by the issuers. For example, I receive ~ $1.5 LEO tokens for my 1,800 HP delegation to @leo.voter and similiarly, I receive ~ 25 cents of Liotes for 580 HP delegations.

For the drips and curations options, I choose to stake the tokens without trading the liquid forms. I believe it is the best way to grow your stake with less burden. For Liotes gains, I follow another way: either I turn into Swap.Hive or Liquid Hive for Splinterlands / Hive trades. For the first time, I chose to make an interblockchain trade to grab an NFT of CTP.

CTP, a.k.a ClickTrackProfit, is an online marketing school where people learn about the tricks of digital marketing with the help of @jongolson and a great team. CTP is the token that is used to reward content creators who create content about these topics and use #ctp hashtag.

CTPSB, on the other hand, is a stakeholdership token that is exponentially increasing in terms of its price. For some time, I see it as one of the safest token holdings in Hive ecosystem. By holding CTPSB, you own a share of the portolio of the @ctpsb account.
It's like buying stocks in exchanges 😄
Pretty cool, isn't it?

Thus, I decided to work on it.

Although anyone can directly buy the Gold nft from Nefty market (Nefty also gives NEFTY token for WAX blockchain transactions on the platform), I bought Silver nft to blend with my existing one.

After I bough a Silver token (with the earnings made by Liotes delegation), I went to the blending part on Neftyblocks.

On blending page, it enables you to auto select the eligible ones to make blending easier for the users. I chose my Nfts (one earned by staking CTP on the challenge and the other one bought by the earnings from Hive delegation) and I generated a Gold nft. 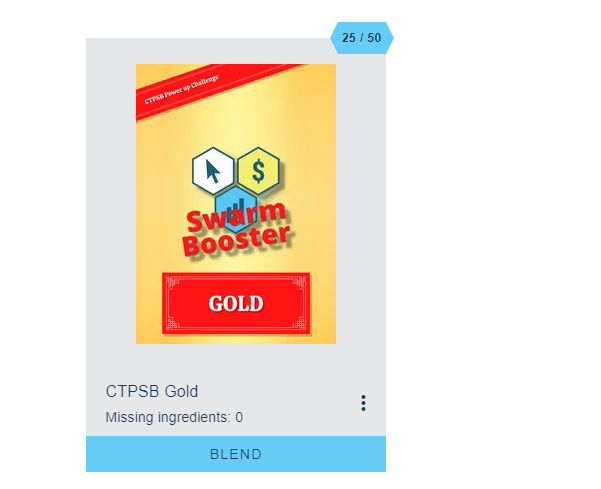 By clicking blend, I received #26 Gold CTPSB NFT that works like the CTPSB token on Hive Engine.

As of speaking, there are 24 more Gold CTPSB NFTs lef on WAX blockchain. To increase my share of the project, I'm planning to increase the number of Gold nfts to 5 (to receive weekly dividends) with the earnings from Alien Worlds and I'll buy CTPSB from Hive Engine.

I've been watching the marketing and searching about the effective ways to feed and make gains from Hive projects. I think this is the way that will help me increase my holdings for CTP since it matches with my investor profile to great extent.

Do you have any specific investment strategy or suggestions to me?
I'd love to receive your feedback ✨

Congratulations on your blended Gold NFT! I'm actually happy to see that it really works because I couldn't test blend it :-).

For some time, I see it as one of the safest token holdings in Hive ecosystem

I see it also like that. Since 100% of the token value is actually backed with hive power, it is probably as safe as it gets. In addition to that it has a very interesting APR compared to other projects :-)

Absolutely. Until now, I was focused on CTP assuming that CTPSB is something the same. But I am planning to concentrate on CTPSB from now on 🤙🏽