Splinterlands investments are one of the favorite positions of Hivers as the system itself is quite rewarding for players. By earning DEC tokens and NFTs from their wins, they receive SPS airdrop and the SPS staked bring Vouchers to them. With less burden, players get several crypto assets thanks to their hard work. 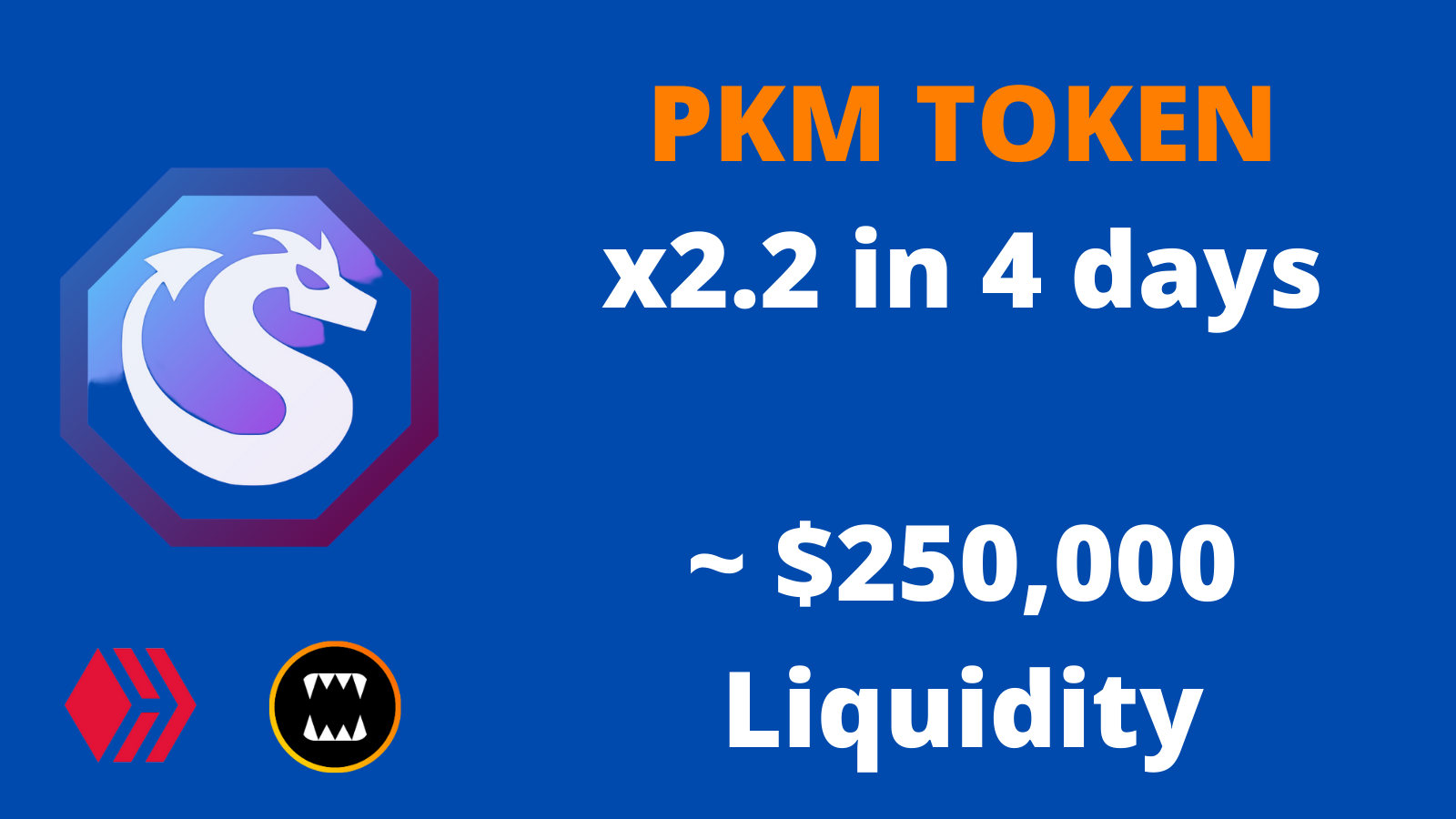 In addition to in-game actions of Splinterlands, the third party exchanges / services bring many utilities to the gamers. For example, @peakmonsters makes it easier for people to buy, sell and rent Splinterlands NFTs by comparing them in several lists or bidding for a new price.

Recently, PeakMonsters team introduced PKM Utility Token ( also check @pkm-token account) that will be majorly used for tournaments and Profit Sharing Liquidity Pools. From 24th of March, the liquidity pool will be filled with $50,000 of Splinterlands assets. To be honest, it is better if you get ready for this amazing thing. Afterwards, the team will incentivize the pool by sharing their profit as liquidity reward for the pools. It is going to be around $3,000 according to the estimation. For more details, check out my overview post to get more insight.

Price has doubled in 4 days

Obviously, the value of the token was nearly for free if you've bought it recently.

As of writing, the pool has $242,000+ liquidity that is staked by investors. What's interesting about this quarter million investment?

The Initial Liquidity Rewards has not been deployed 😎 So it means that, the liquidity providers receive the fee from the market as an incentive. From 24th of March, it is going to be more rewarding for sure 👾

Speculating about the price of PKM token

Basically, it is still below it's intrinsic value from my own perspective. The token has doubled its price in 3 days and it is still doing perfectly fine. The current narrative behind the increase in price is the hardworking team, the use cases of the token and the profit sharing mechanism that will keep the market dynamic and appetize the new investors.

There will be 500,000,000 PKM tokens in total. The token owners will receive nice amount of profit from the team as a profit sharing if they consider providing liquidity. It turns out that you are becoming a stakeholder with your investment.

I consider that the price will react to the initial incentive that will reward people with DEC, SPS, Voucher and PKM according to their shares in liquidity pool. Even when the initial hype starts diminishing, the profit sharing rewards will bring sustainable price for the token regarding the APR that will be calculated when these days come.

PeakMonsters Token (PKM) started with the ratio of 1/10 in PKM/SPS pool. After 4 days, the ratio has turned into 1/4.49 without the starting of initial liquidity rewards ($50,000 worth of DEC, SPS, Voucher and PKM tokens).

As of writing, the PKM / SPS pool is filled with ~ $250,000. When the 120 days of Liquidity pool rewards are launched (around $413 to be distributed per day), we are likely to see higher price levels for the token. I'm already in from the first day and I think it is also a promising investments in Hive ecosystem.

So if you've been in from day one and it's doubled in value against SPS, how much PKM do you have left compared to what you put in the pool?

I seems like it would be a pretty big loss of PKM if you withdrew your stake right now.

The first day I provided some liquidity but then I realized that the rewards were not set yet. Then, I did not provide liquidity to the pool with any of my accounts as the incentives will start as of 24th of March.

Besides, I'm not sure whether we should see PKM as something to trade for its price actions. I consider PKM as a share of the Profit Sharing Mechanism of PeakMonsters. My goal is to accumulate as many token as possible to increase my share in the pool 😄

It's nice to see that Peakmonsters have finally came out with their token that will have few use cases from the beginning... Will it hold the price we will see...

It is too early to get any conclusions as we still have to receive the airdrop if I understood it well... Also, these first days are very volatile and speculative... Don't forget that these tokens in the pool are the only one that are out there and the FOMO is over the roof... 50% of the pool is minted as all PKM tokens are created from thin air, and the rest 50% is SPS... And 250K USD initial liquidity is a lot...

PKM has its place in the HIVE-Splinterlands tokenomics world, that's for sure!

The token valuation without the initial liquidity reward looks pretty cool although we have not seen any hype that drove the market crazy. The initial 120 days of rewards may push the price of the token up when the possible APR looks juicy for the investors.

PeakMonsters is a great team that created their own utility token. Even the faith that gamers have is a strong narrative (even stronger than the tournaments or short-term price actions imho). We will see what levels will be the price range for the token.

Ah yes now I feel like I’ve missed out already.

Let's say the tip of the iceberg...

As we talked about it earlier, I'm going to wake you up on 24th of March 😄 I do not think anything is missed out yet mate ^^

PeakMonsters is a strong project built around Splinterlands and it has brought us a great renting market. For sure PKM token will thrive in the future and it paves a model for others to follow.

I think PeakMonsters is one of the best third party markets that adds value to a game. I see the future of the token quite promising as both the team and the product itself are too good to attract investment 😄

Thanks for your attention ✌

I did not know about peakmonster token but I think great that finally its launched. Thanks for sharing this useful info.

Make sure that you check the liquidity pool on 24th of March :)

thank you so much. its very helpful

That is indeed nice for all the users of this great UI. They should try to see if there are some other games they could diversify to.

It can be good for the project if they can turn into a gaming brand. People appreciate their good work 🤙🏽

We need more developers fist before we try to tackle that. But would be fun.

You may have noticed that we quietly updated https://pkm.peakmonsters.com/liquidity-pool-and-lp-rewards
That page does a better job of explaining just how the LP rewards will work. Now we're doing 120 days and saving up and then doing another 120 days. Instead of 365 and adding like 3k more each month... this way those who add at the beginning will be just as benefitted as the end.