Do Kown and the team behind LUNA proposed a revival plan that is based on forking the blockchain from that point when the UST token was pegged to $1 as it should be. 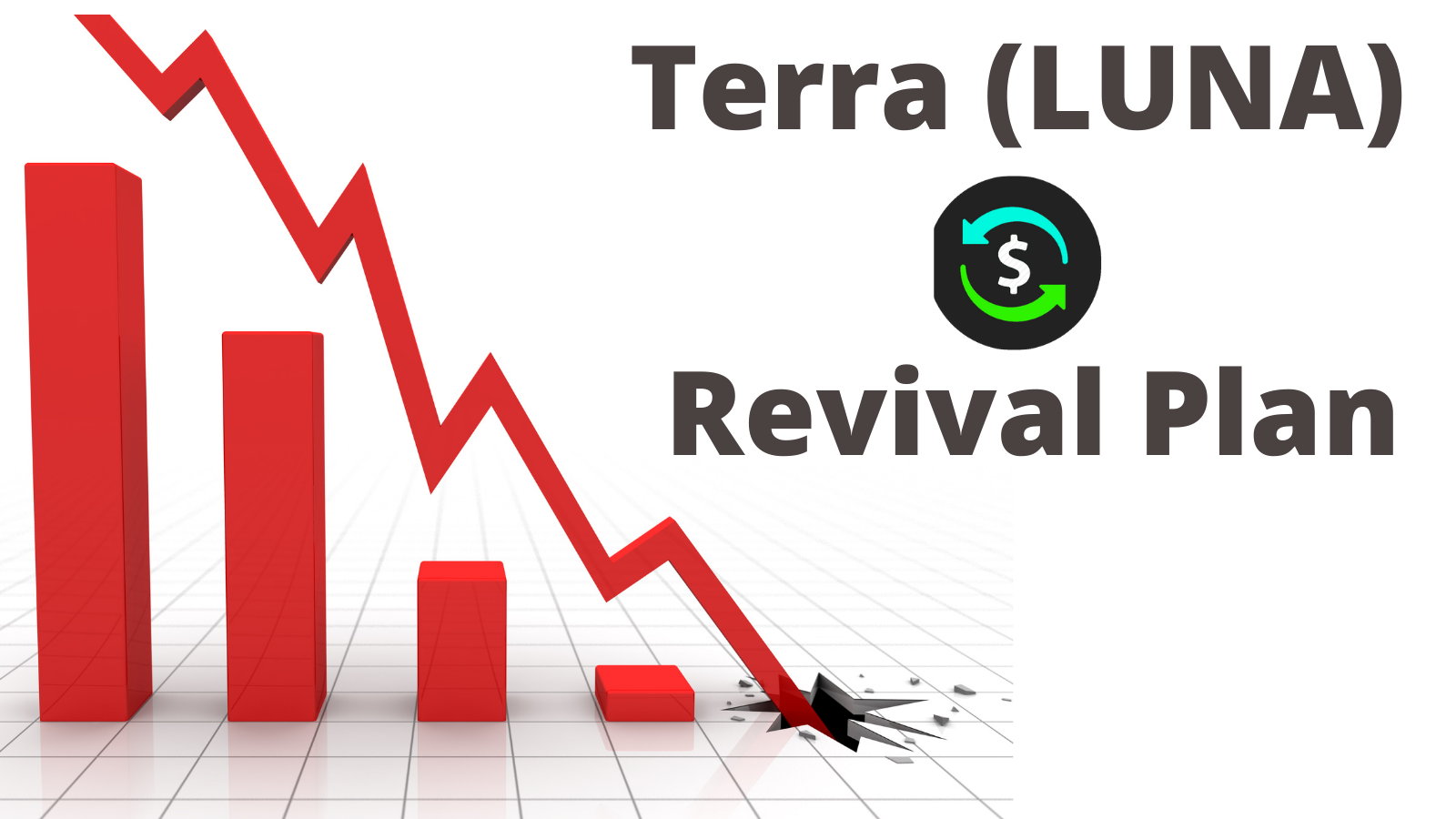 The plan has less supply of LUNA and re-distribution of tokens to the community members who lost their money when the UST token was depegged. 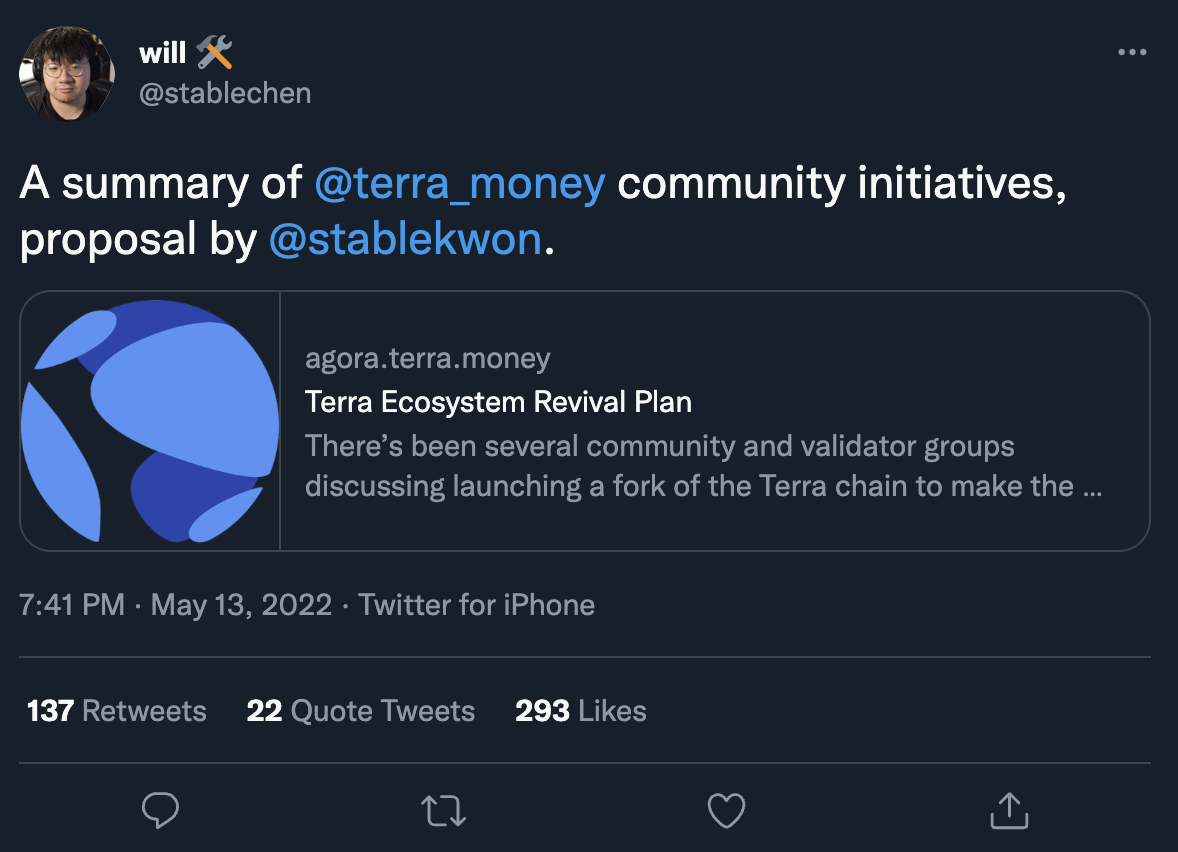 The Revival Plan - Yay or Nay?

Do Kwon propose validators to reset the network and limit the supply of LUNA to 1B token in total? Besides, he asks for a %7 inflation as a network fee to secure the blockchain via this model of incentive.

If a crypto project losts it credibility, I believe it hits harder than dropping %90 in a week. Here we are watching the drama of Terra that lead thousands of people to lose their savings in 3 days. After that point, people cannot patiently wait for a recovering blockchain from the ruins.

Neither airdrop nor re-distribution can compensate for the loss of people. As far as I've read on Twitter, Reddit, and social media, the Terra team, a.k.a stable guys, are alone in this war.

The Distribution of Tokens

According to the Revival Plan, the hodlers of $0.0001 LUNA and $0.11 UST tokens will be rewarded in the network that is planned to reset.

It reminded me of the takeover by Justin Sun when he could not control the community. In both cases, the success would never have any possibility without that shares the same vision and goals with the team.👌🏼

Price of Terra & UST may Slightly Increase BUT

Of course, the price will pump after the "positive" news about the future of Terra. However, I think it will only make exchanges get more fees from the transactions while the Terra FUD is still hot.

Phoenix plan by Terra will have some effect on both coins but the narrative has lost its impact on crypto. Many people are ready to forget about Terra stuff and continue their crypto journey (but for people who lost their savings)

For Crypto History, the case of Terra was a catastrophic accident and we are ready to take lessons and go without Terra.

Terra team is trying to come up with solutions that may compensate for the losses of people to some extent. According to the plan, there is going to be a reset for the network and the number of tokens will only be 1B. To help people secure the network, there will be %7 inflation, as well.

People who lost their money only want to get "pegged" solutions for the money that they lost. As far as the Revival plan is concerned, it is just Hopium to come back from $0.000132. Unfortunately, the Terra team lost their community and it is too hard to build better the project than the proposed one.

Maybe it is time to go without Terra in the crypto ecosystem... ✌🏼

I wonder what's the condition of the investors who invested only in LUNA.
And I hope it recovers soon with positive vibes.

I hope they are mentally okay as we heard a lot of suicide news :(

I still have like 10 days left of unbonding from my OSMO/UST pool on Osmosis... Can't happen fast enough, hopefully they can do something to pump it back up enough in those 10 days for me to have some worth left in those pools...

When something seems like a ponzi, it's probably a ponzi...
Don't have nearly all of your LP in 2 week lockups...

When the ponzi is revealed, you want to be able to get out ASAP!

Taken a monster hit from all of this... It hasn't been fun to say the least. I hope it covers your losses mate, the revival plan may get some interest on it but LUNA token is in a worse situation than UST :/

It's all related though so one effects another. Is what it is at this point.

It is dead and buried, that’s just a certainty. No matter what they do next. What with all the people that started buying extra Luna when it fell and caught a falling knife…

Nobody could foresee % a 99 drop and it costs a lot to them all. Many lessons have been taken in a week :)

What about the rest of the Luna tokens that people have in their exchange wallets?

I think they will not be included because it is hard to prove in your exchange wallets :I

All we can say is that I hope everybody is able to recover after this huge crash.

However we did see a 14% play with our cryptocurrency bouncing back up. Pretty crazy how much wealth was destroyed in just a couple of days.

Well hang on and let's see if we can figure out somewhere to recover after this wild week.

Actually, the case affected the whole market and coins lost their value due to FUD. We wish crypto recovers ASAP and help people sustain their healthy lives

I can agree with that!

Actually made me laugh sorry for that. I still have my Luna and will offload if and when I see an upside as everyone is going to dump this. The people who have stake locked up will see this as some hope to get out quick.

So sad that those who had some LUNA to buy a house cannot even buy a bar of chocolate after the sharp decrease. It is too hard to stay mentally strong

When the trust is gone the project is doomed and TERRA is cooked.

Unfortunately, even re-branding would not save the project after that time.

I don't think will really solve anything. What is he changing in the new token that will make it so this type of attack never happens again? I don't see anything here about that at all.

He takes a centralized PoV in terms of distributing the tokens. There is nearly no way to be trusted again. Even worse...

I hope and pray that investors of luna and ust who had lost a lot would survive this unfortunate situation. I feel them for i have also lost a lot in the first year or my trading/investment in stocks and crypto. We can still earn the money we have lost in time, so it's better to go back up and start again and learn from the past mistakes. Also as they always say, "invest only what you can afford to lose"

Unfortunately, there are so many people who bought LUNA for around 1-2 dollars and lost the whole balance thinking that it was the dip level for them. The depression waves are contagious :/ I hope it recovers

I agree with you, despite all their huge effort and plans going forward for LUNA… the loss of people’s faith in LUNA ecosystem is a huge problem. It may recover just a little bit in the long term (if lucky enough…) but crypto users will never look at it the same way.
Let’s just hope that everyone can recover as much as they can…

Yay! 🤗
Your content has been boosted with Ecency Points, by @idiosyncratic1.
Use Ecency daily to boost your growth on platform!

I don't see any reason why people should still want to invest in luna, luna is dead and there is no way this can be fix because people have already lost interest totally.

It will be hard to regain trust and enthusiasm here. CZ of Binance has called these solutions not workable and he has my respect, so I don't think this will succeed.

@idiosyncratic1 67
about 21 hours ago

IMHO, they are doing their best to keep the community and devs on the Terra ecosystem. Yet, it is not likely to be enough with these incentives