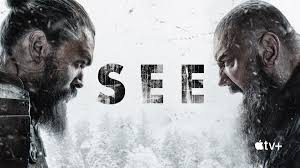 In a post apocalyptic world centuries into the future, destroyed by pollution and technology and ravaged by a disease that has cursed future generations of children to be born unable to see, except for a brother and sister and a very small percentage of the remaining population, who are hidden and labelled witches, blamed for the disasters and destruction of the old world.

See brings us on an epic battle between clans, families, brothers and sisters, sighted and the blind in a rather enjoyable take of an apocalyptic world destroyed by mankinds greed.

Jason Momoa plays a Villager who was once a feared warrior now tasked with protecting the children he rared from the a goup of witchfinders know are the Travanties who have attacked their home in the village of Alkenny, the Travanties are blood thirty mercenaries hell bent on wiping out the remaining witches or sighted.

The story takes us on a journey across dangerous war torn wastelands in search of the children's true father a sighted man who it was believed travelled from village to village sleeping with women in an effort to repopulated the world with sighted children in his image, whom he hoped would search him out one day and build a city of the future. 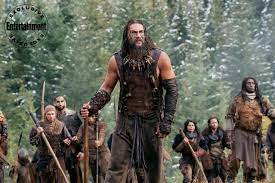 However there are many twists and turns along the way, many dangerous roads to be travelled to reunite the children with their Father and many cunningly well thought out and executed battle scenes that could turn this series into an epic blockbuster. 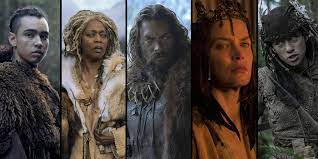 The soundtrack consists of a collection of classic tracks like LOU REEDS Perfect Day and RAYA YARBROUGHS Find the Way, Child and some great sync placements by
BEAR MCCREARY who is well know for soundtracks such as Revolution and Gods of War among others, you can find further information and a complete list of tracks HERE

In a future where humankind has lost the ability to see and is forced to interact in new ways, a set of twins with sight is born, challenging the status quo.
From Presearch: See Synopsis

MY CONCLUSION
I found this first series a really enjoyable and refreshing take on the post apocalyptic genre, there is some really god actors/actresses delivering exceptional character performances as blind warriors, which was really well done and put together, so I am eager to watch the second season which is only half through release, so I am going to wait until I have all the episodes to binge watch and give you my take on that.

I will say thought that I have watched the first episode and was highly impressed, some new all star cast members have been brought on board, building apon the already impressive line-up, so I am expecting big things for See going into the future.

WATCH THE TRAILER
If you enjoyed the review, I would appreciate it if you would blinding go ahead and smash that upvote and reblog as it would help me reach more readers and potential followers, Hope you enjoyed the read have a nice day....