The Psychological Pain Behind Lost Opportunity 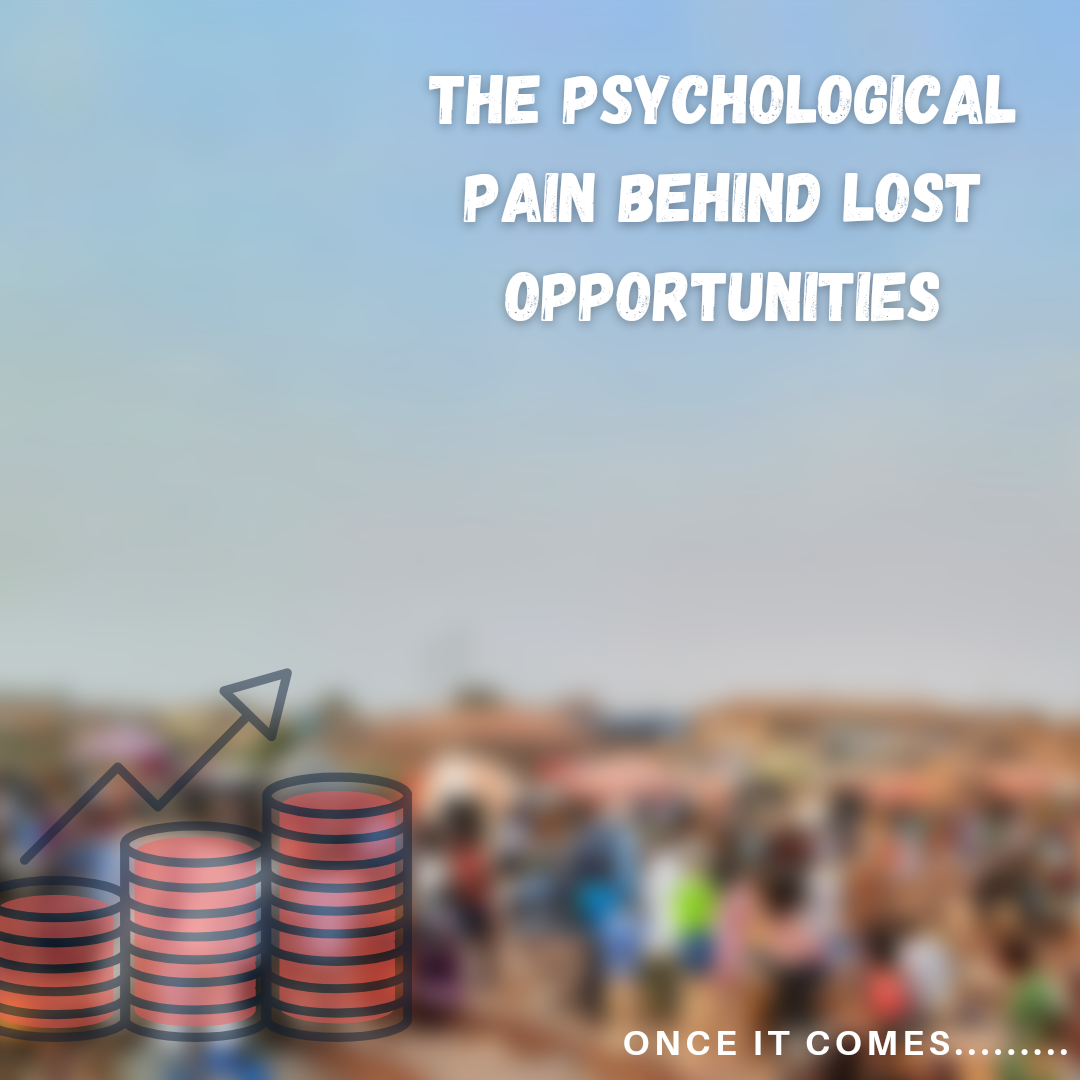 When people lose due to the inevitability of mistakes, they're often more affected, and this isn't because making bad calls is solely synonymous with them.

However, they're always lamenting the loss that comes with the opportunity cost. The lost opportunity for another viable and valuable prospect and expecting to pull "rabbits out of hats" The struggle to use the economical means available to them to attain a decent financial standing is typically cut short, even if they do everything, there's the aspect of unforeseen circumstances, unplanned expenditure, inflation, incurred costs and the human factor which plays a huge role.

....The Mental A State Of Deprivation

Being in a state of deprivation has its advantages, every financial ailing does too, however, we're mostly too encapsulated with how much we have lost that we forget the valuables we might have taken from such experiences. There are people who have had one shot at making it in life, but they actually messed it up. However, no one says life isn't cruel. The state of the world isn't balanced, inept people are making laws, restraining crypto and forcing people to go through conventional methods even when they mostly know that this will amount to nothing.

Most of these complications are why people are wary of failing when the right opportunity comes. Sometimes people are not equipped enough, sometimes they're equipped but have accrued expensive mistakes without paying much cognizance. No one eventually sees the cause of their failure as an external thing. The fact that they were in the hot seat, pulling the strings and making the decision, we eventually blame ourselves solely for failing.

The truth here is, people can mess up their only shot in life to be in a better standing, and the regret and pain that comes as a ripple effect is what eventually ruins them and not that loss in the first place. This is why they (people) cannot afford complacency in a bid to avoid that diminishing returns.

With crypto, however, we have discovered that no one is actually a failure, the compounding perspective makes this so. When you go for real-time interviews, there's always a coin to flip. It's either you get the job or you actually don't. In crypto, this isn't the case. In fact, I've met some people who aren't the brightest of people when it comes to handling real-time business, getting value for their degrees and even failed at staying afloat in their densely competitive economies but have totally failed.

Are You Truly A Loser With Crypto?

These people have ended up as geniuses in crypto and actually become way success online, more than they actually have in real-time. This is to say that the way the world works in real-time is different and this is why a lot of others have invested time and effort more into their online lives, owning virtual assets and all, in the virtual space. With crypto, however, the world necessarily don't have to be black and white. In real-time people take losses rather seriously and this is because of the lack of dynamism when real-time opportunities.

So many people lose millions in Crypto but never seem to bother, and this is because you don't stay a loser for far too long. The more people investing and HODLING creates an even bigger economy, and it means that in the long run, eventually almost everyone would win. A lot of people have become better with money in real-time, due to their little wins with crypto. Imagine having to suffer the stigma of losing a job interview and living with the tag of "failure" all your life. This might even incur more disbelief in one's ability to eschew value.

This doesn't mean the cryptoverse doesn't have its own failings as well. There's the hype of trending buying, scam projects, the manipulation of whales and the excessive greed. However, this is excusable in the sense that we can never get a perfect market because of the human factor involved. In fact, we don't require much of this perfection because, these human factors, emotions, erratics.

The FOMO and the FUD it basically enriches the system to some extent and actually keeps it going. That said, the plentier the better. Over the couple of last few days, I've come to realize that money can make people autocratic, in a bid to sustain their wealth and even make more, they tend to see people as a direct obstacle to them making more money. People with "more" money are majorly one of the world's problem, they get to the top, cut off the ladder and justify this by evening trying to own more, even when they don't really need that much.

People need to remember that money is simply that, money, and not a true measure of their worth.

But at the same time, not a lot of people can actually help it.

Well while HODLing is good, I still think it's good to take profits occasionally and rebalance your portfolio. At least that way you are comfortable no matter which direction the market moves.

That's it exactly. There are options to fill whatever shock the market brings and this is actually my point. Crypto spoils people for choice.

That is what one will encounter being into crypto and the sudden change of price either high or low should not be a surprise to any individual in the blockchain.

Someone once said; "The rich get richer while the poor buys Btc:

FOMO is one of the top things that drives the market, it's both a market strategy and a deceptive trick

When people lose due to the inevitability of mistakes, they're often more affected, and this isn't because making bad calls is solely synonymous with them.

This is so true, its psychological. It is worse when you are on profit then later end up losing. Crypto traders lament alot, things like, i would have waited a bit , i knew the it will dump, I just... .

This article explains the reality of life. Thanks for sharing!

Crypto traders lament alot, things like, i would have waited a bit , i knew the it will dump, I just...

That's because adjusting to loss isn't easy, you'd be calculating the things you could have achieved if you sold at that time when your guys asked you to sell. But then sometimes we lose ignorantly... Not having the right information or losing totally became of greed. However we lose, it's a psychological thing and mostly affects how we treat the market going forward

We learn from our mistakes most times but it is always after we've made them repeatedly.

Crypto sudden bother us when we first join it but what truly matters is understanding what you invest in,understanding market and never forget to always take some profit

Exactly, understanding your investment and what you're investing in

Thank you, How's the Christmas season already feeling like?

At least for the time being I am in the accumulate and hodl mode. I don't have to take out profits yet and I am perfectly happy to just ride out what is going on. I take my time and don't put in any more than I can afford to lose and I am being consistent with being here every day either commenting and upvoting or adding a blog post to that.

The funny thing is that before Hive, I was not very good at predicting a value in the crypto market although BTC, LTC, BCH, and DOGE were serious winners for me, however, they were small wins because I did not have very much invested.
Here on Hive it has been an amazing experience and not because Hive jump up in value, but because of the awesome way we can earn Hive, and Hive Engine Tokens just by being active :-)