In the Tornado Cash Wake - DAO Goes Dark Without Explanation The Tornado Cash DAO community has voted in favor of adding the DAO’s governance as a signatory to the treasury’s multi-signatory (multisig) wallet. The treasury looks after about $21.6 million across three different wallets. This vote began on Wednesday, based on a proposal on the Tornado Cash DAO governance page, and ended today with 100% approval from all 12 participants. These 12 participants contributed 51,000 TORN tokens to push the vote to completion.

At the time of the writing of this article (August 12, 2022 @ 16:40 ET), any attempt to access the Tornado Cash DAO (torn.community) yields the following result: 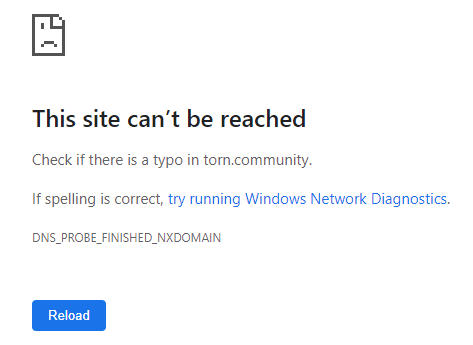 The DAO’s decision to increase its multisig signers is in case something happens to two signatories. This is over fears that people associated with the DAO, including members of the multisig, could be targeted by law enforcement following the recently imposed US sanctions. As previously reported by The Block, one Tornado Cash developer has already been arrested in The Netherlands. It is unclear if he was arrested simply for being a Tornado Cash developer or for being a relayer on the network (officials said the person had made large-scale profits from the protocol).

"It’s unclear what was responsible for the decentralized autonomous organization (DAO) going dark, but it followed a series of actions taken by different authorities and private entities in the wake of U.S. sanctions announced against the controversial mixer on Monday" [Wright, supra]. This DAO darkness appears to be just another occurrence of the deplatforming being experienced by Tornado Cash.

In the last four days, Circle froze more than 75,000 USD Coin (USDC) worth of funds on addresses listed by Treasury officials, dYdX said it had blocked some users’ accounts with funds linked to Tornado Cash, and Alchemy and Infura.io blocked remote procedure call requests to the crypto mixer.

Additionally, "[t]he protocol’s Discord and governance forum pages are no longer accessible. Its email, website, and GitHub pages have also been removed since the US sanctions were announced earlier in the week" [Avan-Nomayo, supra]. 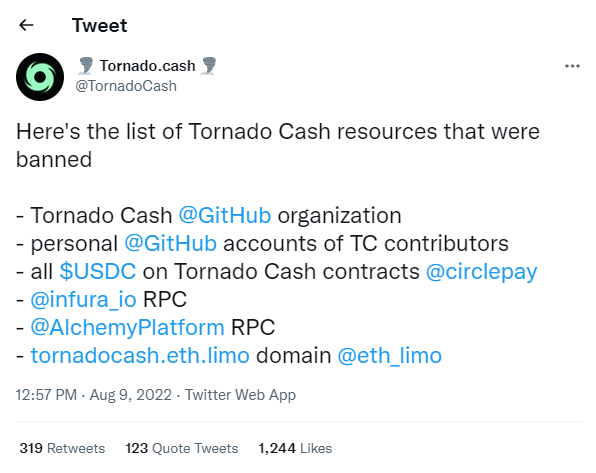 It is unclear as to the reasoning as to why the sanctions imposed by the U.S. have caused neutral channels (i.e. Discord) to be taken down. Seemingly, the answer appears within a joint statement issued by the Federal Financial Institutions Examination Council and Office of Foreign Asset Control which includes:

To this author, at least, this seems to entail quite a reach.

In a statement to Cointelegraph, Omid Malekan, an adjunct professor at Columbia Business School, stated:

For the first time ever, the U.S. government has criminalized interacting with software. This is a big departure from their traditional decrees of sanctioning people, companies and governments. There is evidence the project in question has indeed been used by criminals/hackers to obfuscate their funds, but there are also many legitimate uses.

So at this time it remains unknown as to whether any further cryptocurrency mixers will be targeted by the U.S. and whether similar 'reaching' repercussions will follow. In a Press Release published August 8, 2022 by the U.S. Department of the Treasury, speaking on the implications flowing from the Tornado Cash sanctions, set forth:

all property and interests in property of the entity above, Tornado Cash, that is in the United States or in the possession or control of U.S. persons is blocked and must be reported to OFAC. In addition, any entities that are owned, directly or indirectly, 50 percent or more by one or more blocked persons are also blocked. All transactions by U.S. persons or within (or transiting) the United States that involve any property or interests in property of designated or otherwise blocked persons are prohibited unless authorized by a general or specific license issued by OFAC, or exempt. These prohibitions include the making of any contribution or provision of funds, goods, or services by, to, or for the benefit of any blocked person and the receipt of any contribution or provision of funds, goods, or services from any such person. (emphasis added)

And in a separate Press Statement published August 8, 2022, Secretary of State Antony J. Blinken appeared to double down on this by stating:

The United States will continue to pursue actions against mixers laundering virtual currency for criminals and those who assist them [...] The United States will not hesitate to use its authorities against malicious cyber actors, to expose, disrupt, and promote accountability for perpetrators and enablers of criminal activities.