In this subsection of the Leo Finance Litecoin Coin Guide let's investigate both sides of the coin (yes - pun intended). Herein, first, we will look at the facts and circumstances surrounding Litecoin which demonstrate that the coin is still breathing life. Then we will look at the relevant facts and circumstances demonstrating that Litecoin has outlived its investability and should be designated a dead coin.

Once complete, it will be up to you, the Litecoin investor (or potential investor) to decide the lifeforce of the Litecoin project for yourself, or, in the alternative, whether an overdue funeral for the coin should be scheduled.

Is there Life in Litecoin to Provide it a Future?

Litecoin still retains some popularity and usefulness today. One positive in favor of Litecoin emanates from its relationship with Bitcoin. If there is another increase in the interest in Bitcoin before any of the scalability improvements are implemented, Litecoin should surge. "This leads into an observation of the cryptocurrency market at large. When the market is booming, the rising tide lifts all ships. It seems that as price action drives speculation, smaller cryptocurrencies benefit more than larger ones, and the opposite seems to be true in general for bear markets" [Hauge, H. Litecoin: A Deafening Silence. (Accessed January 7, 2022).

Another positive in favor of Litecoin is its resistance to a 51% attack. A review of the data on Crypto51 demonstrates that the theoretical cost of a PoW 51% attack on Litecoin is much higher than many other PoW coins. And upon further review of this data it is apparent that the largest cryptocurrency using identical algorithms with others are the most difficult to affect a 51% attack against. Accordingly, as Litecoin is the largest crypto utilizing Scrypt, it is the most difficult to attack among all the Scrypt based cryptos.

Being a fork of Bitcoin, Litecoin retains many of its technical properties. As such, Litecoin may be seen as a useful testing ground for technical improvements prior to implementation into the Bitcoin protocol. Improvements such as Segregated Witness (SegWit) and Lightning Network debuted on Litecoin prior to implementation on Bitcoin. And MimbleWimble is on the horizon. Utilization of Litecoin in this fashion serves two purposes:

As most should be aware of, Charlie Lee, founding developer of Litecoin sold his stake in the coin at a price near it's all-time highs. This was not received well by the Litecoin community as many saw his action like the captain jumping a sinking ship. For most, Lee's divestiture was viewed as a lack of confidence in the continued viability in the project.

In fact, development within the Litecoin project has stalled and become virtually non-existent. Comparing the development activity within Litecoin with that of several other large projects amplifies this: This lack of development activity is clearly a red flag for any project. It demonstrates that the projects code may fall behind competing coins and subject the project to be compromised.

Fuel was added to this fire by a leaked transcript of a telegram chat between Charlie Lee and Franklyn Richards (founding director of the Litecoin Foundation, operator of Litecoin.com, and COO of Zulu Republic). Richards took the side of hiring more developers to work on the Litecoin project while Lee remained more focused on marketing the project. Lee's position on this matter is quite illuminating:

... Litecoin works today. If we have 0 improvements from now on, it doesn’t diminish the fact that Litecoin works very well as money. I personally think adoption is much more important than core protocol devlopment today. We need more people to know about LTC. We need better and easier to use wallets. We need more merchants accepting LTC. So things like Spedn supporting LTC, partnerships with Dolphins, work on LoafWallet and new lightning wallets is more important than adding fungibility to Litecoin. Yes, fungibility is important as I’ve said in my tweets. But that’s a long term goal. People want an update today because they care about pumping the price. I don’t care about that.

For those wishing to read a full transcript of the Lee/Richards chat may find it here.

Miners have quickly lost interest in pursuing Litecoin. The mining of Litecoin is much less profitable now for the miners as compared to years past. The mining difficulty has steadily increased while the profits therefrom have steadily decreased meaning the miners must work harder to reap less profit. Furthermore, there is a system-wide lack of demand for Litecoin making the creation of new Litecoin's less profitable. It must be noted that this situation of the miner's losing interest in the Litecoin system is exacerbated as there are less available people to secure the network thereby leaving the platform vulnerable to attack. This trend is clearly demonstrated on the following chart: 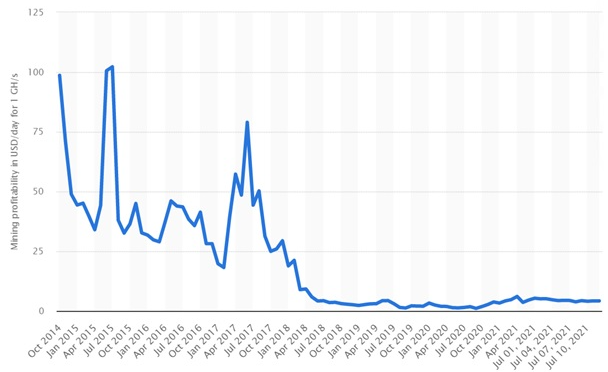 As stated at the onset, the decision on whether or not Litecoin is dead is now yours. To arrive at an answer of this question one truly must look hard at all of the facts and circumstances surrounding the present condition of the project.

That being said nonetheless, we will share our opinion on this subject with you. Litecoin today is a mere shadow of its former self - the glitter and luster has long worn off. However, Litecoin is a workhorse and remains useful as a transactional cryptocurrency. So, in that respect, Litecoin is not dead.

But the foregoing must be qualified. The reduced development activity is very concerning diminishing overall confidence in the project. Should Litecoin cease to be actively maintained and developed going forward, the death knell could be ringing for the project as a whole.