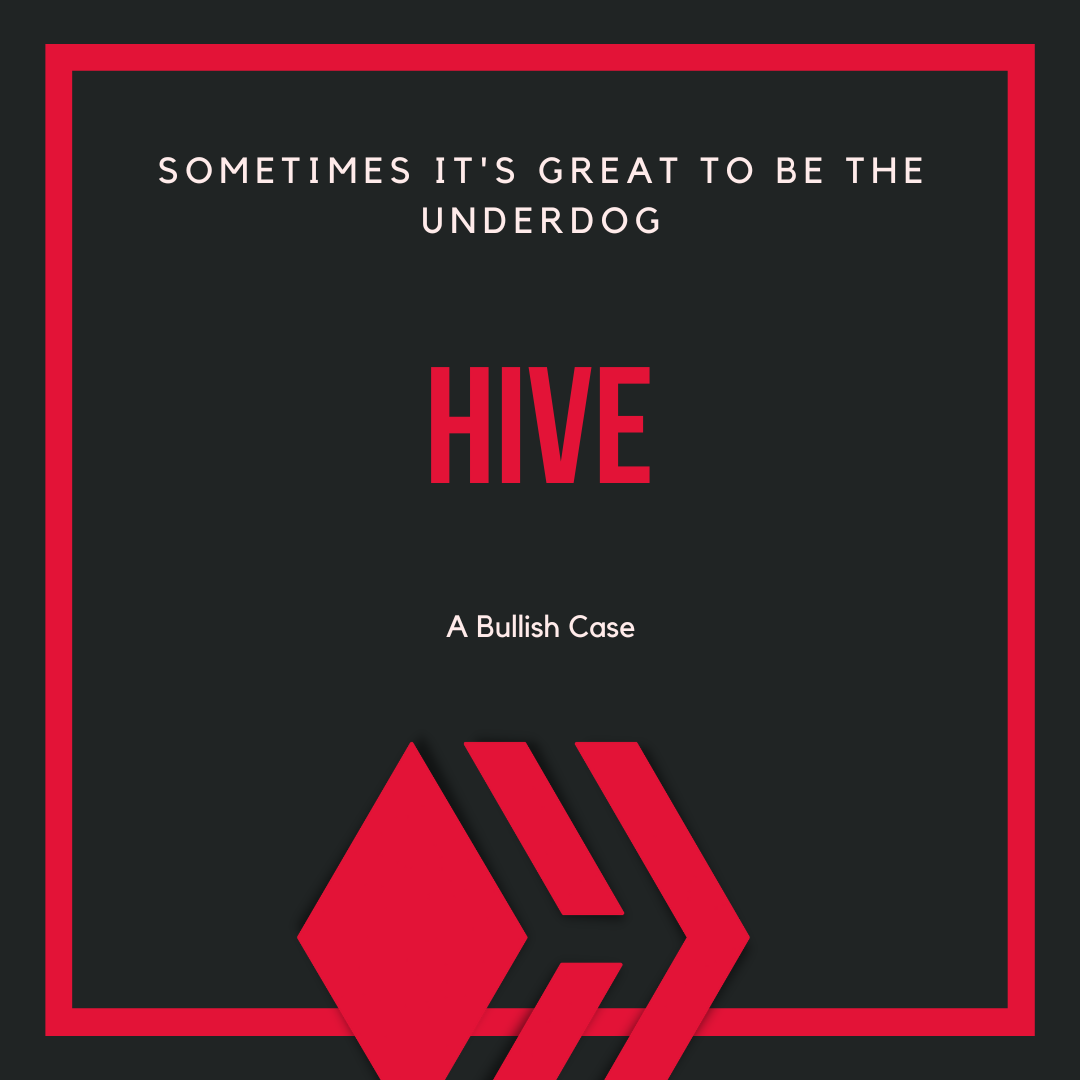 The narratives of this bear market have been flowing around and chaotic. When are they not? This is exactly like the bear market of 2018, the only difference is that Crypto is now much more in the public eye than it was in the last cycle. Now Crypto is a household name and everything that happens in it is being heard by the average human being.

5 days ago, I wrote a post titled: Is Now A Good Time to Buy HIVE ($0.35)?. It may seem like I've turned into the ultimate HIVE shill, but today we'll talk about another reason to be bullish on the Hive ecosystem and one of the many reasons why I'm buying massive quantities of HIVE right now (upwards of 100k HIVE per week, as of late).

@taskmaster4450 just posted the following Thread. He shows the last 24 hours of volume on the Internal market. The internal market is a fully decentralized, on-chain and transparent marketplace for trading HIVE->HBD and HBD->HIVE. 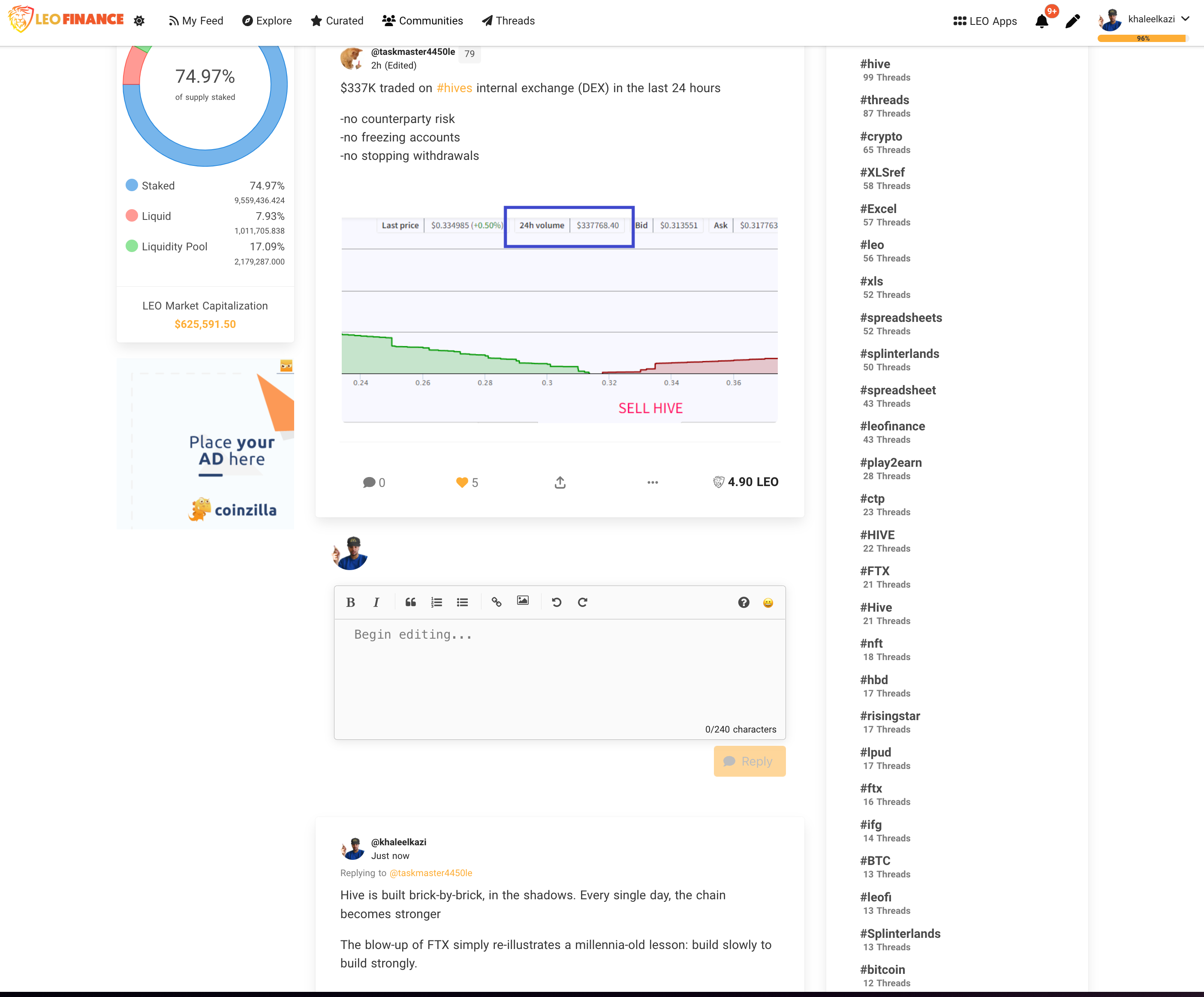 Nested in his Thread, you can see my reply.

The internal market is growing. This is a fully decentralized, on-chain and transparent marketplace for HIVE & HBD. The significance of this cannot go understated. It is one notch in the multi-faceted decentralized operation of the Hive ecosystem.

The growth of this number is what is meaningful. Slow and steady. Building brick by brick. The Hive ecosystem has always been in a state of expansion. Whether that is in the number of dApps being built here or the technology at the blockchain level. We're always seeing improvements and we're completely unknown to the broader crypto space.

Many of us think that being unknown is a bad thing. I'm here to tell you why it is also a great thing.

Sometimes It's Great to Be the Underdog

When you're the underdog, you can quietly and diligently build your castle. Brick by brick. You can spend enormous time and resources building the foundations of your castle such that nobody could knock it down in the future.

Eventually, people will come calling for your head. The longer you remain unknown, the longer you have to prepare. You can build something that will last the ages, as long as you work diligently and without distraction.

A big dog came for Hive once. His name was Justin Sun. He tried to buy a company and a blockchain but what he was really after was a community. It didn't take long for him to realize that this community he came after had spent years in the trenches together, building resources and building the foundational architecture that could seed a prosperous future.

A big dog came for the underdog. He walked away with his tail between his legs and nothing to show for it but a dead company, a dead blockchain and tens of millions of dollars lost.

The underdog prevailed. The underdog was seen as weak at the top layer. But when someone came and tried to disrupt the underdog, the foundations were found to be rock solid. Immovable. Unbeatable. Indestructible.

Hive has built indestructible foundations. The core community will never leave this blockchain. Whether HIVE is $0.32 or $0.0000032.

Value investing is about looking at a company and evaluating if it is cheap on a relative basis to its true value. Determining the true value of a company is typically done by looking at its balance sheet, it's market advantage, the quality of its product, the revenue and profits it generates. Determining future revenue potential, etc.

Instead, you look at the foundations of it. You look at the bedrock that is holding the chain together. If that bedrock is found to be unstable, then you should look elsewhere.

When you look at what lies beneath Hive, you'll find an immovable object. Something that is almost mystical in nature. Someone came to move it once. In fact, many people have tried over the years. But they were unable. They could not win. Despite having hundreds of millions of dollars to deploy, they could not destroy the foundational architecture of something that was built by thousands of people around the world over several years.

We are building in the shadows. We are unknown to the outside world. The foundations we are constructing will be here for the decades to come.

Great perspective. I always feel at home in the pack of underdogs, and I keep on experiencing the advantages that are embedded in that long run ;)

🧱 Stacking Hive regularly. Such a great place to be. If all goes well I will be a Dolphin in a couple of weeks (next PUD). In the middle of the bear market I am building brick by brick. You're absolutely right about the underdog narrative, I think inevitably, we're going to scale and it might just take time, but it's good to build from the shadows and keep prepping for the unknown. As for Justin Sun, it was a proof that decentralization is tried ownership. Even Ned Scott who had the steemit vision cannot understand what hive has become.

Being an underdog sure has its benefit. We can learn from mistakes of others and build resilent till we can take every blow back and smile like Hive is now doing after justin sun attack on the chain.

One of the many strengths of Hive is that it is being built in the shadows. Just like BTC in the early days.

To some extent, Hive is more life-changing than Bitcoin.

To a very large extent.

Im super excited to see where we go in the next bullrun because we have so much potential as youve said above. The sky is the limit and our imagination.

Thank you for this encouraging post about Hive. It's been a tough week, month and year. Many are starting to see crypto as a scam or ponzi or some other undesirable name.

Even though I have been here since Steem days, it's only human to be discouraged by the sheer magnitude of the greed and abuse.

But your post reminds me that even Bitcoin was ten cents once, and many thought it was once thought of as worthless nerd money.

And Hive is indeed an evolving and growing animal, which will look much different in 5 years. I think most of the changes will be positive and help to make this place a bigger economic and social powewrhouse.

I love where you took Hive to. Such a perceptive of Hive being an underdog while it keeps working underground without being noticed. That is good because some day, when its glory shines out, it will be late for those who looked down on such Blockchain. For the meantime, let's keep stacking and supporting Hive till it reaches the peak.

Thanks for a great POV! I wish I can buy right now but I really want to get as much as possible with this little investment of mine. So, my instinct tells me to just wait around $0.20 each. I don't know if it will happen but atleast I know my price point.

Thanks for this post and the education it gave me.