It's SAAAATURDAY!!!!! I know, it's exciting. Enjoy a GIF from one of the best and most underrated TV shows of all time - Whitest Kids U Know. Rest in peace, Trevor Moore. You brought me many laughs and helped shape my sense of humor. If you've never seen the show - go to youtube and have a great time.

I don't know why the Embed isn't working ugh...

Alright - Moving on. So I wanted to share a really cool game that is being developed on the WAX blockchain. They released their first few card pack drops months ago and I honestly thought the project had kind of died. This tends to happen to a lot of "upcoming games" that release NFTs or packs and then just fizzle out. I don't know if it's a biting off more than you can chew kinda situation or if it was in the plan the whole time. I guess no one will ever know. But Colonize Mars is not stopping! Gameplay comes out in a week! 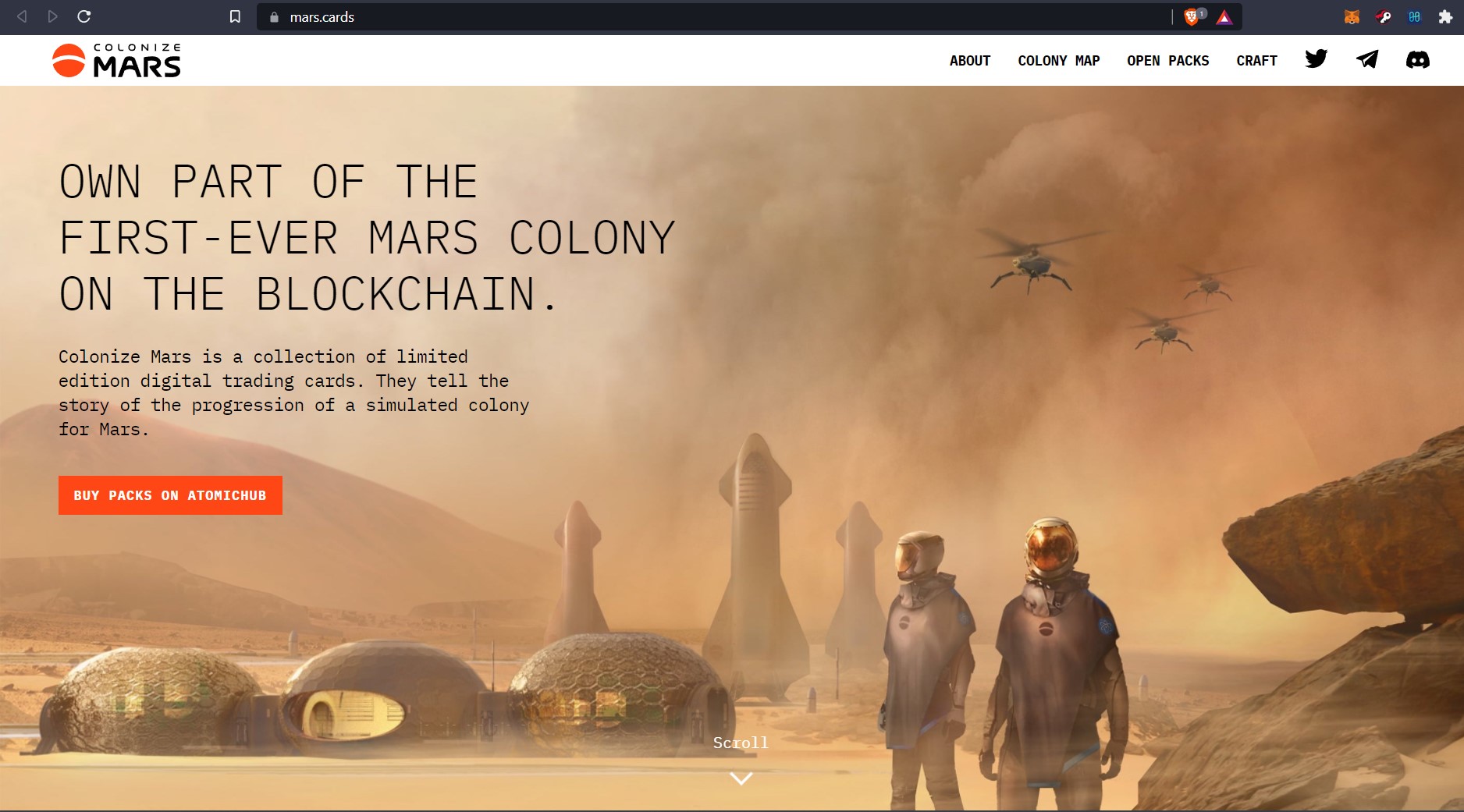 So the idea with Colonize Mars is - it's a simulation of the process of colonizing Mars. It lives on the WAX blockchain and will tell the story of building a simulated colony on Mars. Sounds really cool, and when the packs first launched I was kinda just buying every NFT release I saw because fuck it. So I ended up with a few packs and sold a lot of my cards, but whatever. I still have some and I'm excited to see how this actually plays out. 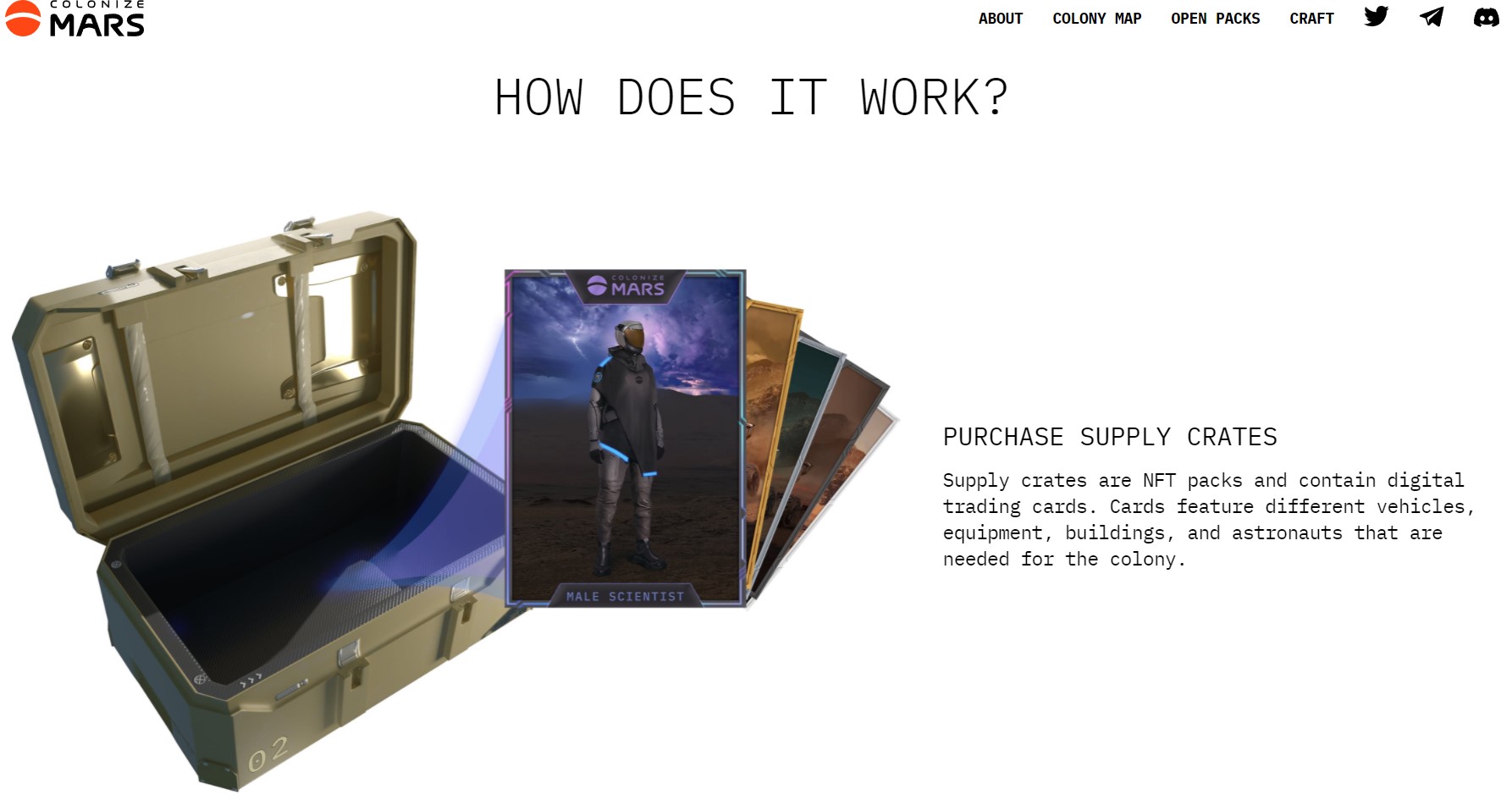 Initially there have been 2 releases of Supply Crates all with random cards of different rarities. These cards can be combined to make higher rarity cards, and such. Pretty standard. Also mixed in with these cards, some lucky people received Ownership cards which were 1/1 NFT cards that give you ownership rights to a certain piece of equipment in the Mars colony. 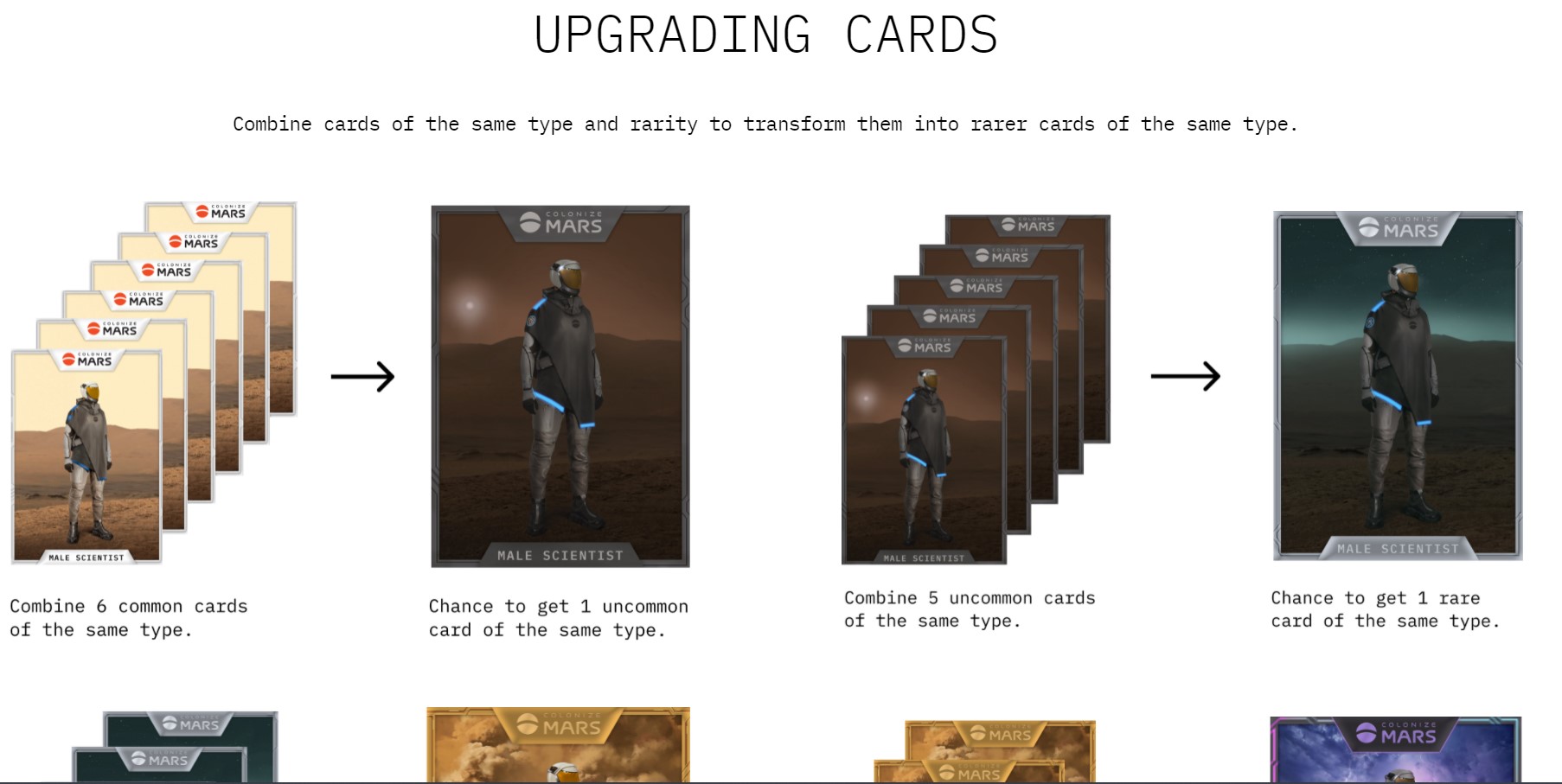 As you can see if you look at the Colony Map, there's only a certain number of assets that players can see. These assets are from the 1/1 NFT cards that some lucky players got. Each one is assigned to a certain player and will play a role in the game. 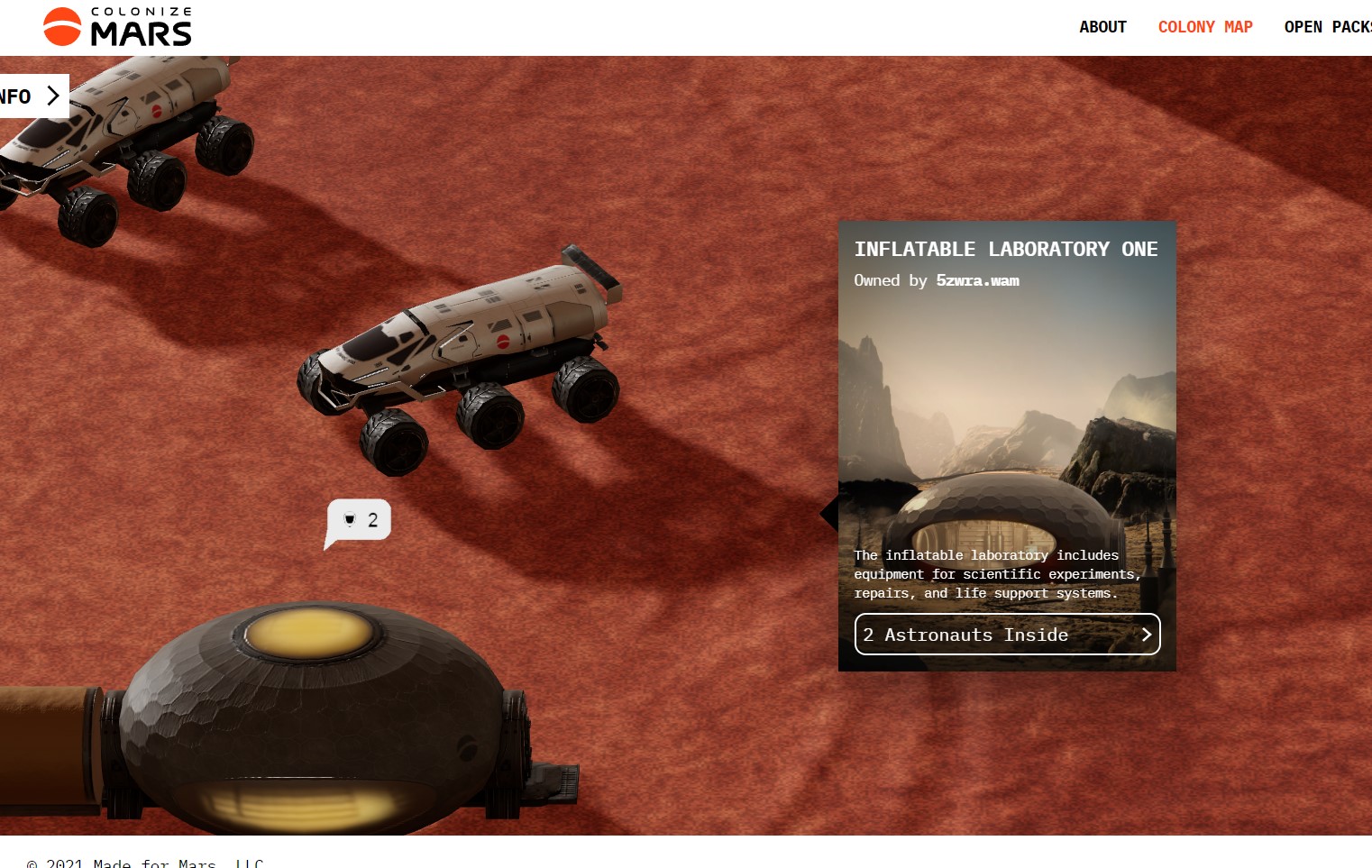 Colonize Mars is introducing a Play to Earn model, and boy do I love that shit! They have created their own token which ahs a whitepaper and shit if you wanna look at it. It's called the Martia Token and will help govern the Martian economy. Martia will be used to maintain and repair items, trade for resources, grant voting rights, and for colony improvement. More features will come with more updates. 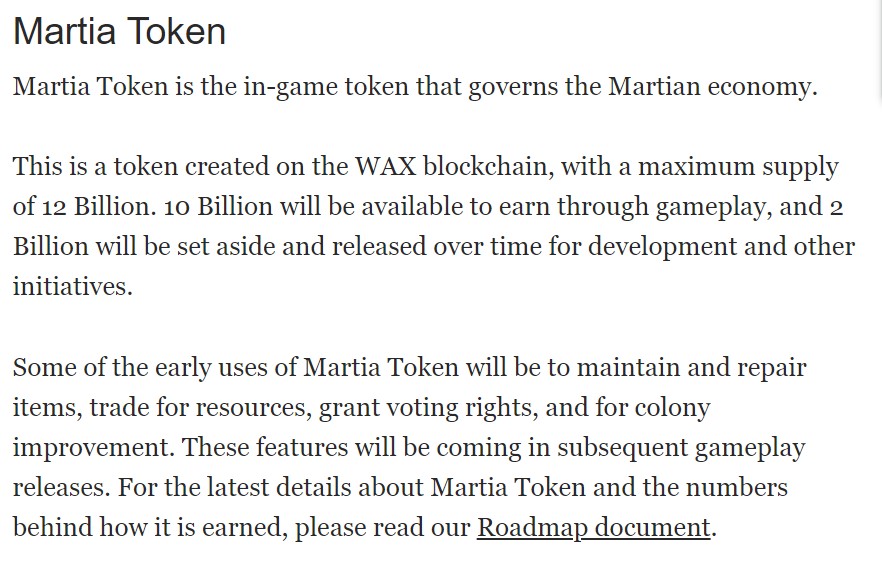 They don't really give a lot of insight on how the game will actually be played. As with most upcoming games, we will just have to wait and see. They do explain how the earning model works though, and I think it's pretty cool especially if you already have some cards laying around in your WAX wallet. 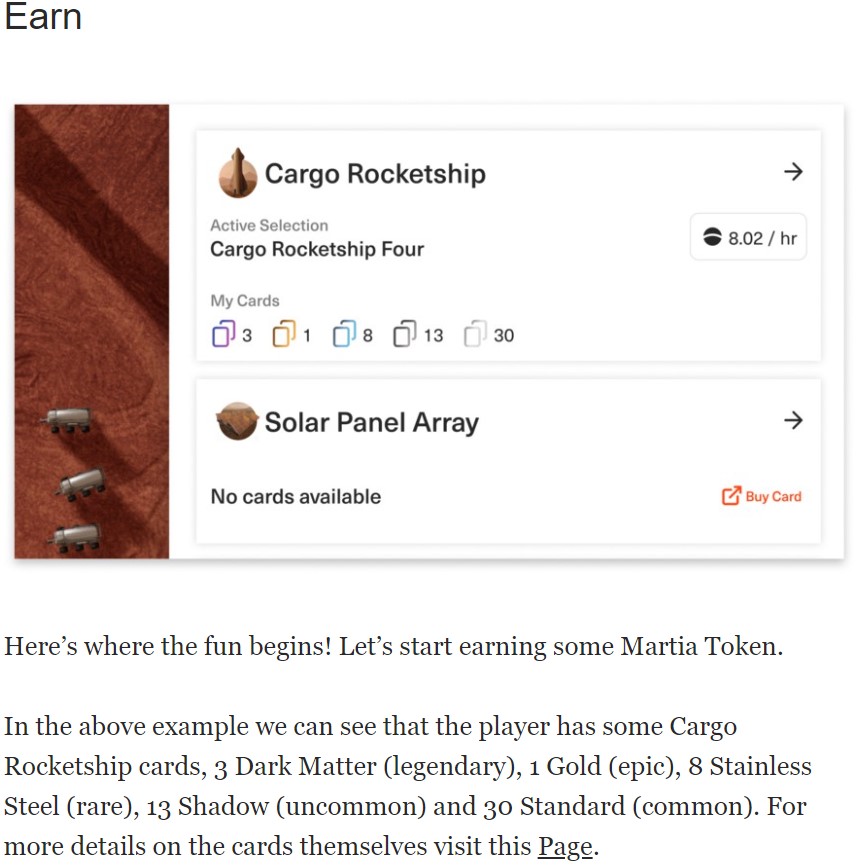 So from my understanding, which isn't 100%, you will be able to click on an asset, for example a Cargo Rocketship on the map. Once you do that, you assign cards from your collection to that specific ownership card. This starts earning you Martia tokens. How much you earn is based on the cards you assign and what fee the owner player charges. It seems that the lucky Owner players are able to earn some Martia as well based on the amount of cards that people assign to their cards. Interesting way of doing this, but I get it. 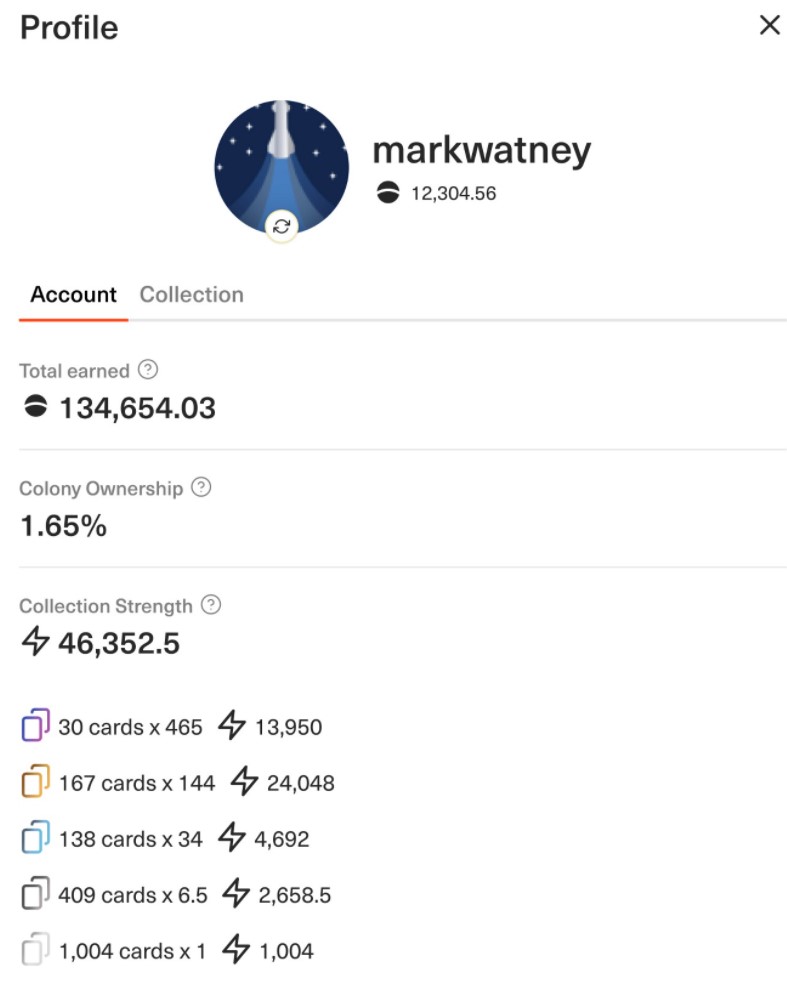 They also give a preview of what a player's profile will look like. It will show the strength of their collection based off how many cards, what rarity, etc.. It will also show their proportional percentage of the Colony that they own. That's pretty much all the info we have at the moment. Like I said, I do have some cards so I'll probably be doing another post showing what the actual in game experience looks like when it releases on the 29th. Exciting stuff.

Do you have any Colonize Mars cards?

Do you have a ref link buddy? Look interesting :D

No ref links! Just wanted to share a cool project :)

I do I picked some up during the low point but they aren't really high value cards. Looks like the game launches on the 29th so interested to see what I can do with the low tier set I have. Normally on these launch announcement I don't bother buying more as it's often highly over priced. The point to get in was last month lol