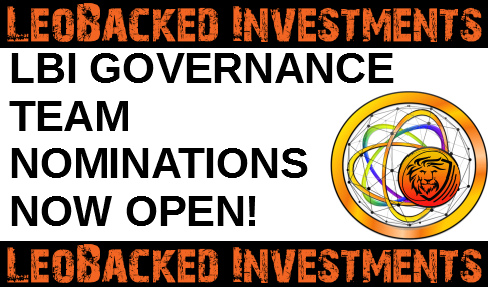 It has been a good month now that we opened and then extended the nomination window for the LBI governance team. It has been stated already that @empoderat will be stepping away as he has personal projects that he is pursuing. We wish him the best of luck in those endeavors.

While the original premise of the LBI GOV team was a group of three people, there have been no other nomination posts besides @alexvan and @bozz. In light of that fact, the Gov team is making the decision to move forward with only two members.

A formal vote will not be held as community confidence appears to be unanimous for the two incumbents given the comments in their nomination posts. If you feel it necessary to dispute this, please reply to this post with your reasons.

Hopefully, 2022 can bring a renewed enthusiasm from the token holders for the LBI project and the governance of said project.

Additionally, given the fact that proposals were so few and far between the last two cycles, the Gov team will be implementing a new model.

The hope was that many community members and holders would take a hands-on approach to the direction of LBI. The system was set up in anticipation of an influx of proposals coming in each window.

As I stated, we haven’t seen close to ten proposals across the life of LBI let alone in a single window. Therefore, from this point forward, the Gov team will put any proposal up to vote at the time of submission or until things pick up to the point that the old model makes sense again.

Taking into account user feedback, we will continue to provide an acceptable window for questions and answers on the proposal before a final vote is collected.

As always, your vote is based on your stake in LBI.

Here is the breakdown as a reminder:

This move is simply to streamline the process and adapt to the current state of the markets and community. If you disagree with this move, or you feel it violates the spirit or tenets of LBI, please feel free to let us know in the comments.

@alexvan and I look forward to serving the LBI community in 2022.

Seems like a sensible idea to me. I vote for that.

And thanks to both of you for stepping in and taking on this role. It is vital.

A lot of LBI token holders and few are involved.

It's a bit too bad there was nobody else stepping up and we haven't seen many proposals lately either. So I think the new changes work out well.

Thank you two for taking the role and best of luck in this new year.

You guys have been doing a great job in my mind. At these early stages, I don't really think there's much to "propose". We're just building our base and the boss, who has done this before with SPI, seems to have a far better idea of how this should work than I do.

Down the road, as things start to develop and progress, and the pool of funds gets bigger, I'm sure there will be some proposals made. For example, being from America, I can't legally get involved with ecoinstants land project in Columbia. LBI probably can. That would be something that could be proposed. But, at this point, I think it's still too early in LBI's growth to start venturing out that far. I'm perfectly content to stick with the things most closely tied to Leo itself and I think you all have been doing a great job doing just that.

Here's to another year of 60% growth. It may not happen this year. 60% is a pretty big number after all. But that doesn't mean it can't.

I will be sad to see @empoderat stepping away but I will see him around his other project.
Very happy with the team LBI has and happy to continue my support.
I wish I could be more involved with LBI, unfortunately, I don't have the knowledge or time at the moment.