Good day all. Today we are going to cover a topic that hopefully will elicit a great deal of discussion. This is something that is very important and should be considered by each individual who holds LBI tokens.

LBI is a token that is based upon the Leofinance platform. Obviously, the Proof-of-Brain use case is the foundation for our earnings as evidenced by the weekly LBI reports put out each Saturday. 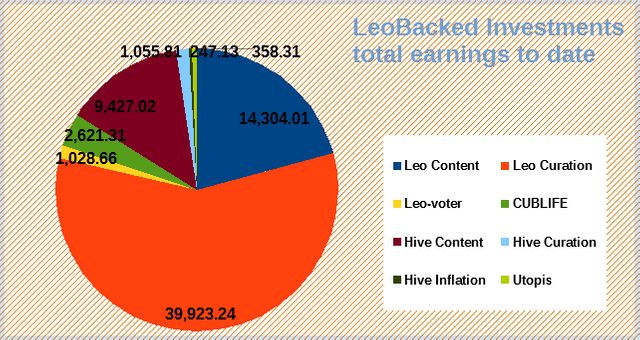 We also know that the purchase of LBI was done by using LEO. Also, the value of each token is priced weekly in LEO.

Naturally, we could price this in anything we wanted. It could be converted to EURO, YEN, BTC, or Shiba Inu. However, what none of this would change a central fact.

People purchased the LBI token using LEO. This is the unit of measure that was used from the beginning.

So far, there is nothing detrimental taking place. All of this is an accounting situation.

The challenge arises when we start dealing with ROI. Ultimately, this is what every LBI token holder is after. If the initial buy in was one LEO per LBI, that person wants the token to be worth 8 LEO; or 10 LEO, or 20 LEO. In other words, the persons wants maximum growth.

As I write this article, the crypto markets are in the middle of a multi-day bloodbath (other than HIVE, go figure). Nevertheless, the long-term outlook for Leofinance, in many of our minds, is much higher levels will be achieved. Thus, it only stands to reason that the price of LEO, over the long-term, will appreciate.

Now there is the temptation to perhaps price it all in USD. That does not solve the problem. People who bought LBI are not likely going to sell it all the way through to USD. I think it is safe to say, LEO in, LEO out.

While it is certainly true that we could find some off-chain investments that moon, is that what this is really about? That are projects such as @SPInvest that exist for that. Ultimately, the odds are we are limiting our return by holding too much of our value in off-chain stuff.

Does this mean we should never engage in off-chain projects? Not at all. What I am alluding to is the fact they should be either short term or pouring more back into LEO. This is what our core focus should be. LBI was set up as a Leofinance-based project and we should not deviate from that by trying to be a catchall fund.

It could be said that using the term "off-chain" is a bit misleading when it really should say "Non-LEO". For example, it is the practice to sell a lot of the Hive Engine tokens as soon as they come in. This is a smart practice since that is not the focus. Take the rewards, convert them to LEO (after hive.swap) and move on. The financial gain is there and we are back to our core basis.

Here is another example:

Look at the earnings in the last week. 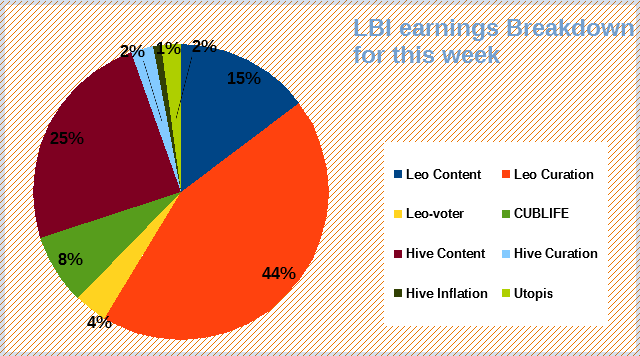 We received 4% of the payout from LeoVoter. This is a result of holding Hive Power and delegating it to that account. Here we see direct payouts in LEO that grow our balance.

Sure, the price of LEO could appreciate at a great pace than HIVE, causing us to suffer a bit of a drawdown in value. However, the fact that each day, that holding is putting LEO in the LBI-token wallet helps to offset that.

We could say the same about Cubfinance. While this is Leofinance-related, it is a separate project. Thus, we know that when the value of CUB goes up, it will have less value in LEO.

Here are the holdings:

The first thing that jumps out is the fact that a significant portion is in the bLEO/BNB pool. This is a valid option since it is providing liquidity to the ecosystem. There are also a variety of other holdings there which help to generate a return, yet are all off-chain. If there is a major run up in the price of LEO, these will fall in value.

Looking at latest CUBLIFE report, we see the dividends is back over 50%. We do not know how long that will last. But we can foresee a time when it will be a bit lower. However, even a 30% annual return is a very good percentage.

The point is perhaps LBI opts to play the off-chain route that way. Buy adding more CUBLIFE, we can increase the amount of LEO that comes into the account every Friday from that project. For now, I believe, the entire portion is the 10% management fee. Why not add to it by holding some CUBLIFE? Yes we are still exposed to the potential of LEO running, yet that is actually recouped in the value of CUBLIFE. Thus, the loss is basically negated as it is captured in the asset base value.

This is something worthy of discussion since, my view is that, if we get spread to much, we will see our returns affected. Too many investments not related to LEO could end up weighing one the value of LBI as priced in LEO.

Let us know what you think in the comment section.

All opinion expressed here are solely my own and are not a reflection of the LBI-token project.

I lean toward keeping a higher percentage of LBI investments more about LEO and the associated projects CubLife, CubDefi and whatever else I am forgetting or that comes along later.

One issue is what reason do I have to hold and invest in cublife if I get returns from cublife held by LBI?

I recently had a need for some liquidity, and did sell a few of each token I had, but not all of one which would have given me the amount I needed with one transaction. When it comes to a family of funds is one fund supporting another fund really a good idea?

I think it makes sense for this to only be about LEO (LEO in and LEO out). After all most of the people who bought in was because we believed in LEO and how well the project team would do. Which reminds me, I should go back to check the proposal and give a vote before the post pays out (still 10 hours left).

I'm just a small holder, but I'm inclined to think that off-chain holdings are best limited to occasional short term opportunities; or maybe an occasional airdrop that moons on hype for a short while, and then it's time to cash out.

My original interest in LBI was based on the idea that it was more or less "LEO-oriented," meaning LEO, CUB, Hive and various derivatives that might come down the road... meaning we can own one token to benefit from maybe a dozen? Two dozen? However many individual ventures.

There's alot of good points there. Sadly since dividends started, LBIs net earnings each week are 400ish LEO which is about 0.001% of the total fund. Works out to around 5% per year which is far from 20%. I've not converted LEO in a few months, it's just building up as a liquid balance until we have something to do with it. LBI was launched just before the Project Blank shilling started so I personally see the price of LEO today being fair because it was built on hype and nothing was delivered.

When you look at total holdings from the latest report, you can see that only 67% directly is LEO. This was a lot higher when LEO was worth more in dollars but our Kingdom holdings have increased while LEO has declined and this is the reason why the LBI token is 1.62 LEO each today. We earn 30%+ on CUBfinance and 5% net on LEO, one gonna grow quicker. We've not invested off the platform for months, a few weeks before dividends started if I remember correctly and even when we were investing into CUBfinance it was all into the bLEO/BNB LP. We converted CUB harvests into BNB and matched it off with whatever we had to convert that week so no LEO was converted to BNB. Our BTC/BNB, beltUSD, beltETH and CUB kingdom holdings were all got from weekly harvests, we never paid for any of them. I have written briefly in a few weekly reports that if LEO goes back to 50 cents, the LBI token will go down in LEO value. I would actually like to see the price of LBI go down in LEO value, same for SPI, the lower the HIVE price the better.

LEO has been going down while everything else has been going up. It's not that we've been investing alot off-platform. These CUBfinance holdings are not forever. As with SPI, I'll sell when I think the price is high and wait until the bear market takes over and then rebuy back in harder. We have to think about taking advantage of the market cycle stages and how we can increase our bags with a few transactions over long periods of time. I'd guess when we sell off our BTC/BNB LP and others hopefully within the next 3 months, alot of it will come back to our LEO wallet to lock in a higher floor LBI price. Right now we have 251k LEO and 233k LBI's circulating giving an absolute floor price of 1.08 LEO. Would be killer to achieve a floor price of 1.50+ LEO during year 2 but have to see what happens as time marches on.

Anyways, right now we need to find a way to build more LEO income to increase our net earnings each week and then we can talk about what to do with our weekly income. Staking has been enabled for CUBlife and will launch officially on Friday so this will help to grow income from that but other than that, I can't think of how to increase LEO earnings other than staking to earn more from curation. I dont wanna start converting CUB harvests to LEO because then it would be subject to a 60% cut as earnings.

as long as we get rich I'm down for whatever :))

I can't wait to get this LBI. My plan to get more of this token. I will like to keep it for 2yrs investment.

My opinion is that LBI should provide maximum exposure to everything LEO related.

For example at the start when nobody understood wLEO, investing in LBI was a great way to gain exposure to that aspect of our community.

The project should maximise exposure to all things LEO, wLEO, Cub Finance and HIVE related.

We invested because we believe the LeoFinance project will be an overall success.

That is true but even Hive related holdings will be subject to the same thing if the price of LEO explodes. As stated, our HIVE holdings are delegated to earn more LEO. We are active so that brings in a bit more HIVE each week.

But the focus should be in those areas.