The (re)launch of Wrapped LEO (WLEO) had a great deal of excitement attached to it. Not only did we get our ERC20 bridge setup, but we also created a whole new set of interesting dynamics for the LEO token economy:

These tokenomics have led to a rapid rise in the LEO price. Since the launch of WLEO on Uniswap (On November 15th), we've risen from $0.19 to today's new ATH of $0.35. 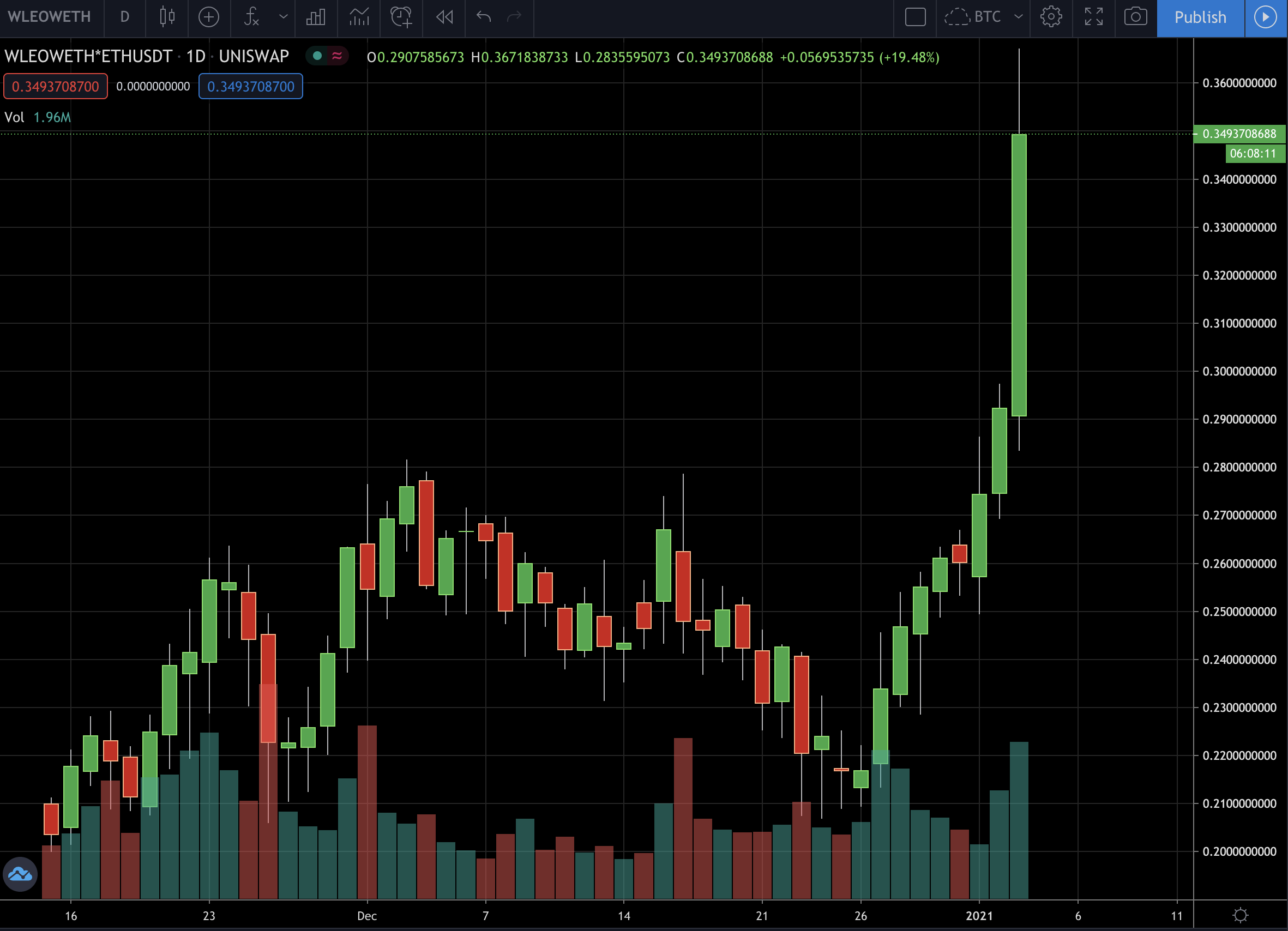 Geyser yields have been skyrocketing lately. As the value of LEO rises, the USD value of geyser payouts also rises.

In short, a rising price is a good thing for engagement on https://leofinance.io as well as liquidity providers on our Uniswap pool and curators who hold LEO POWER in their Hive wallets.

Here is a screenshot of @nealmcspadden's LP position (since I like to use him as a guinea pig):

He's up 97.06% in net market gains since he put ETH and WLEO into the Uniswap pool. The kicker is that this doesn't include his Geyser rewards.

His last Geyser payout was 1312.973 LEO which (at current price levels) is valued at $459.54. His next Geyser payout should be slightly more LEO (or roughly the same amount ~1312) for this next month period. These yield payouts occur in about 9 days.

In total, Neal is up 99.64% on his original LP position in just about 50 days of being a liquidity provider. It will be interesting to see where his position stands after the Month 2 Geyser LP rewards are distributed.

LeoFi, LeoFinance and the Future

We're working on a series of updates now. The team is bigger than ever in terms of who's working on the project simultaneously.

What this means is that we're building several different aspects of the LeoFinance project all at once. The Lightning DB will be our next major release (in less than a week after we finish the final tests). LeoFi is one of our next major projects after that which will be launched closely alongside project ___ and a number of other things that we're building right now.

All 3 of these have different devs working on them simultaneously. This allows us to crank out the releases faster than we normally could in 2020.

Many community members are asking for more info and updates on all of these different projects. For the last few weeks, I've been writing an extensive post for the whole community. The current word count is now over 30,000 words and climbing.

We've got a lot of projects launching in 2021 and I want to make sure that we have a singular place that we can send people to when they want to learn about what LeoFinance is and what we're aiming to accomplish with our roadmap for the years to come.

One of the #1 questions right now is "wen snapshot/airdrop date?" We're still in the early stages of preparing project ____. As it gets closer, we'll announce the important details (snapshot date, airdrop date, app release, etc.). Most are worried that they'll somehow miss the snapshot date. Don't worry, you'll have plenty of time to get your additional power ups in before the snapshot occurs. The announcement announcing the snapshot announcement hasn't even gone live yet!

This update is just a quick milestone and congratulations to everyone in the LeoFinance community. We accomplished so much in 2020, but we have a lot that is yet to be accomplished in 2021 and beyond.

p.s. don't forget about the initiative we're running with @theycallmedan. See this post for details.

$1 LEO doesn't seem that far away at this point. It's amazing how this community evolves, what a bright future you guys are designing for it and how valuable the time spent in here becomes.

Not to mention how excited most of us are for the launch of project _____ which we all know by now what it is...

Just to give a hint to others that have no clue what project _____ is I'll simply say that I'm simply tired of tweeting for free in a centralized manner and can't wait to do that on the blockchain.

Great to be part of Leofinance and 2021 looks so full of goodies. Everything seems to be paying of at this moment. Congratulations and have a great 2021!

It really doesn't, a $1 Leo is more than possible at this stage.

I'm really hyped for ____. These projects are really giving people value for their time and content.

I just wrote a post about how small cap coins like Leo can explode in this market. Great minds think alike.

Great job as always, I'm so hyped for the new site mblogging site and leo lending.

Things are looking better and better. I'm glad the team got bigger. To think this is just the beginning of great new things. Keep it up champs!

All that and now a $2M market cap:

Please! someone! I have a question. With so many $LEO news I lost track, the future #LEO airdrop is tied with project___ ???

The current word count is now over 30,000 words and climbing.

...Great stuff because I just skip any read with less than 30K words :P

Jokes aside can't wait to see what the future holds for LEO holders...if 2021 is half shitty of what 2020 was for 90% of the world then I expect nothing but huge success for everyone involved

I'd have preferred for Leo price to stay as it was last week or the week before for a while (for obvious reasons) but the market works as it works, sooooo the price is going up :) Competition is on guys :)

Congrats to the team for the good work and we're waiting to see what's coming.

This is good to see, I just buy 11 Leo some hours ago and 1 LEOM. I wonder if only 2 LEOM staked will mine something, but I've been accumulating for the airdrop. I wonder what that new project would be.

Well, I was thinking that the main question is: Khal, when moon? Not, when aidrop?

Now back to the price. Latest buy bid:

What platform do you use on your screenshot to keep track of impermanent loss?

Let us all calm down and get excited minimally so as not to put pressure on Leo. I believe we'd eventually see 1$ but then might not be now, irrespective, congratulations to us. We have come a long way.

It's pretty amazing to be part of this project, and this entire "journey!"

Sometimes I reflect on the fact that what we're seeing here with LeoFinance was sort of what I had hoped would happen with Hive, after the break from ST€€M... but maybe the real direction has always been that it's the 2nd layer communities and development that will carry the greater Hive forward, as well.

Regardless, "great job" to everyone working on the many aspects of LeoFinance! Somehow, I don't think $1 LEO is all that far in the future.

Very impressive what LEO has achieved.

It's exciting times around @FinanceLeo right now and can't wait to see all of the plans for 2021.
I can easily see the user base 10x this year if the bull holds for a while which is good news all round.

You have no tits, yet you excite me this much! What is becoming of me! I love you bro, finito!

Thanks for all you put in, Leofinance is going to be massive, I predicted a $3 Leo, now I think I'm going to raise that. We haven't even done so much, yet there's so much price action, I can't be happier for being in this ship. I'm so glad!!

Cheers to all we are yet to become... Cheers to our growth on here!

the fun is starting. Congratulations to all for this achievement there is still a long way to go

Damn y'all are doing big shit. I'm glad to be a part of it

About LEOfi is there any type of knowlage on this so far. I've been just starting to look into these types of systems but I'm curious how yours will work. I know most of it is hush hush now but will it matter how much LEO I have staked when that part goes live?

How wonderful Leo, congratulations!
Despite having little time in the community, I identify so much with the Leo Finance project that day by day it continues to grow with its decentralized vision, let's follow the north that Satoshi Nakamoto drew, and simply support the idea for a better world, for a system that promises to be fairer to the world.

Undoubtedly, Leo is the best investment I made this year.

I may have invested a few Leo tokens but it's certainly performing beyond my expectation.

Cheers to the Leo team & community!

Great job. 2020 was a fun ride and looking forward to having a similar upward run with the platform and the token price. The experience on the platform was amazing for almost a year now and the community remain vibrant throughout. Good luck.

Great.
I learn something new here.
thanks

Hard work pays off, my friend!

Leo is such a fast-growing project on the Hive ecosystem and these days its like that every other day Leo is making some awesome moves. I am quite confident that Leo will have tremendous growth in 2021.

Leo is no doubt future of cryptocurrency. I would like to extend big thanks to the community behind its development.

All I'm seeing is an upward trend. Thanks to the team for their incredible efforts put in to build these sustainable projects for the LeoFinance community.

The current word count is now over 30,000 words and climbing.

I'm already scared reading that long piece. Why not break them into series of posts that is shared on daily basis? and perhaps publish a pdf full article for those who wish to download?

I feel stupid for selling almost 75% of my LEO holdings. Time to build my stack back up.

"It is never wrong to take profits, and never regret them." - Chrono

A bit late to the party but proudly part of this community.
You guys are amazing !
Let’s keep this rolling.

Guys, you all are doing an amazing work with this!

Thanks for all your efforts to keep this place in a steady growth.

WLEO is my current crypto gem!

Leo in 6 months 2$? As it looks like it will happen faster. And with all the developments and updates OMG looks bullish to me

Is LEO on the Hive blochchain or the Ethereum blockchain?

Hey! I'd love to do a blog about the Leo token and the Leo Finance team, would you be interested in a short interview?

My main goal is to build a UI similar to Leo but for Politics, I might jump on the discord later to discuss some details, it would be really nice if I get the one who made the Leo UI to help out.