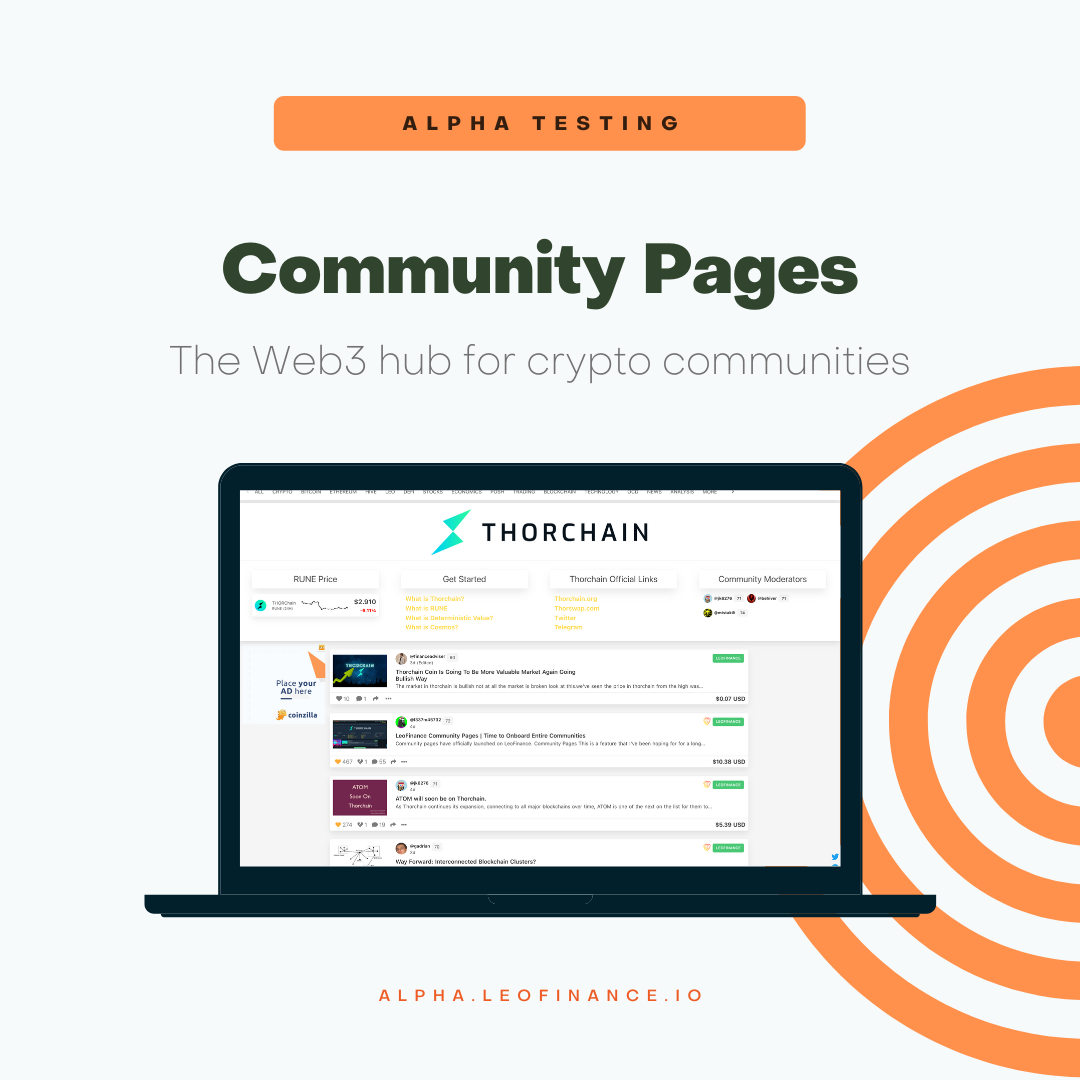 Community Pages are a unique way to give each Community a home on the LeoFinance platform. 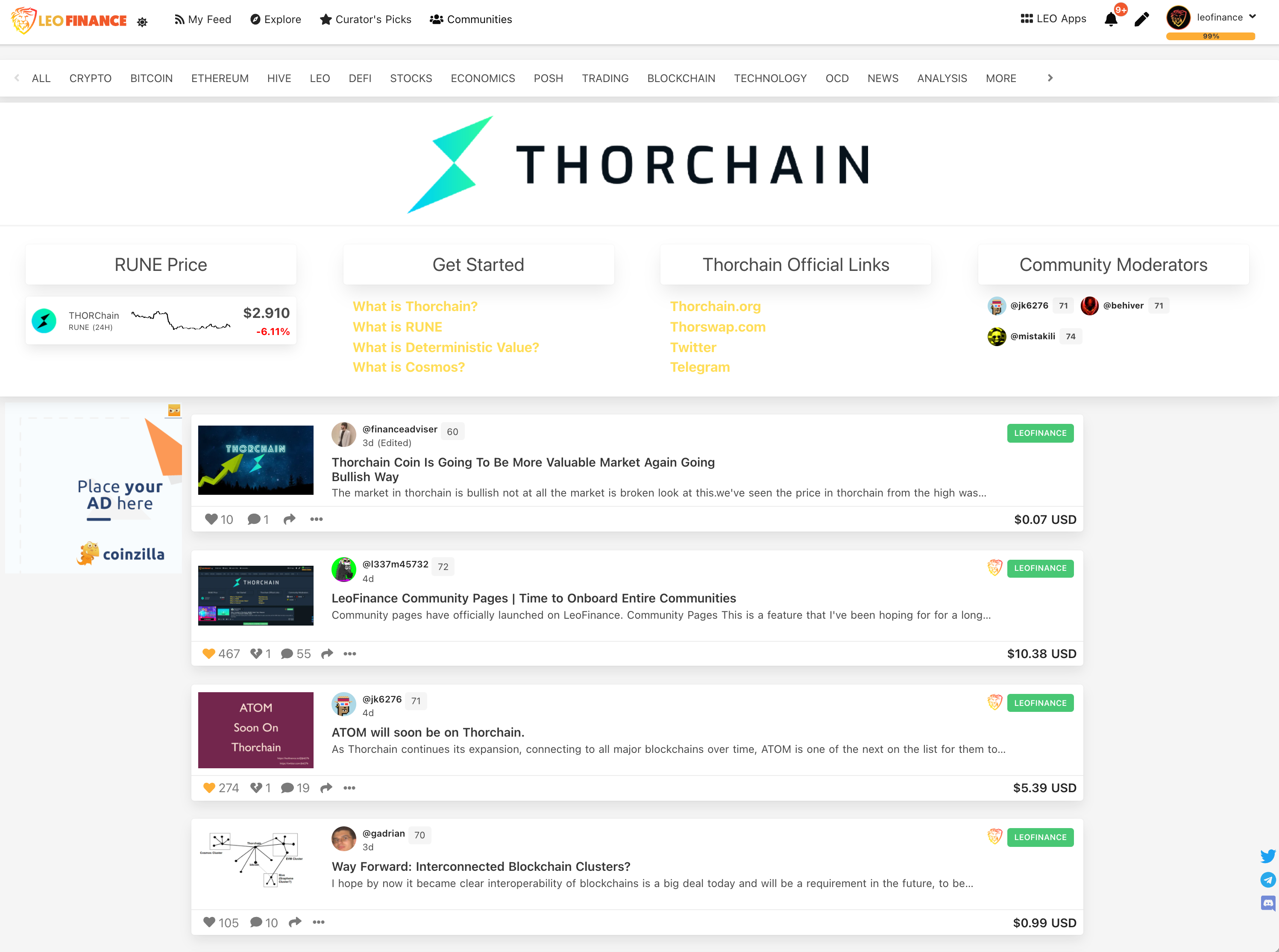 The pages show the price of a Community's token (using Coingecko's API). They also show other relevant info / links about the Community.

Then you jump down to the feed. The feed is where things get interesting - and complicated.

The Complexities of Communities

To the user, it looks like any other feed. To LeoFinance, creating this new algorithm was an absolute nightmare. It has taken an unbelievable amount of dev hours.

The feeds use a dynamic curation algorithm that scrapes all of the listed Moderators' activities. It looks at all their activities and then it ranks content based on the size of their upvote and the timing of their upvote AND weighs it against the other Moderators in that community.

It's quite complicated which is why Community Pages has taken so long.

To build these dynamic feeds, we developed a whole new ranking algorithm and built it into Lightning. While doing this, we also decided to push our team and build an entirely new update for Lightning simultaneously.

The LeoTeam is known for our ability to bite off more than we should chew at once. Regardless, we knew this Lightning update was coming so it seemed wise to kill two birds with one dev.

This has led to some integration difficulties. We deployed Community Pages to the LeoFinance Production UI after some light testing on our Private Alpha server. This deployment to Production (leofinance.io) unveiled a number of issues - namely, scaling and compatibility.

Where Are Community Pages?

We worked quickly to hammer any bugs that were reported to us by the community but as of yesterday, we decided to roll back the Community Pages update to our Open Alpha server for more testing.

We did this once we got a few bug reports about major things breaking: i.e. the ability to post, edit posts, etc. These are due to the new version of Lightning and our attempt at integrating it simultaneously with the release of Community Pages.

We've got the vast majority of bugs already indexed and the team is working on them. We didn't want to disrupt the userbase for a few days while we did this, so we decided to roll back to Open Alpha.

When Will They Return?

You can use Community Pages right now at https://alpha.leofinance.io/thorchain - actually, we urge you to use the Alpha UI for all you LeoFinance activities for the next few days so that we can discover any other bugs that may have been missed.

After a couple days of bug patches and reporting, we'll redeploy Community Pages to LeoFinance Production.

Sometimes this involves bigger hiccups than anticipated - namely, the complexity of this lightning integration going completely above and beyond what we had mapped out.

Despite this, Lightning's upgrade will be faster than ever and will ultimately lead us down the path toward LeoMerge which is the much bigger development looming over our heads.

If you'd like to help us, we would greatly appreciate anyone who uses the https://alpha.leofinance.io/thorchain Alpha UI and then reports in the #bug-reports Discord channel on the LeoFinance server.

This will help us uncover any bugs we may have missed - we believe we found most of them by leaving Community Pages live on Production for a few days and gathering reports from the community, but there are surely other issues out there waiting to be solved.

However, would it be possible to fetch prices from tribalDex also? Because, not all community token will be on coingecko.

All the same, Good job 👏

However, would it be possible to fetch prices from tribalDex also? Because, not all community token will be on coingecko.

Very crucial point you raised here. That could be a cool way to get investors to hive-engine to see more of Hive based assets.

I'll take a look at the Alpha UI. Will it be added in Rising Star?

Hopefully and I think that will definitely be an added advantage also,let see how it goes

I think it will be helpful. We'll wait and see.

Having that too will.make it more interesting ,let see how it goes,but of all the team is doing well enough to make the community a better place for all

They definitely work hard and do great work.

I think every community that tends to growth and increased engagement would have their place in the Community pages. It's a place for all crypto communities.

I absolutely agree with you.

Great development thus far with community pages. It seem cool having to check out the UI. Will definitely do well to drop a report if I notice any bug. Kudos to the team for all you do

This is really quite impressive and I appreciate every hardwork been put to it to attract more uses to the leo world. There is definitely progress occuring and this is a success to witness in the community. Leo to the world.

Leo to the world.

Innovation brews here and is then exported to other parts of the cryptoverse.

It's pretty nice seeing such progress occur in the blockchain

Another interesting additional advantage for all users out there,this on it on keeps giving everyone more reason to put more effort to all activities right here.

Another massive one from the team

have you tried the alpha site yet? Did you encounter any bugs?

I'm in the comment section, trying to read about them before I try using the link.

The new Community pages is so modernized. It's neat looking and with lightning upgrade it will be a finance hub. All these features are coming out so effortless !

Are we inviting communities that are already formed or are we supposed to be creating our own communities?

Very true, and I love the fact that there's no limit to the development embarked on by the Leo team.

Definitely,more updates to keep everyone busy and engage keeps surfacing often,this is really a good way to go in the community

More development this days and I think this is really going to make the community more better for everyone again.

The community can only get better

Another good step to make things get better right here,it can only get better with the level of advancement being introduced here

This is not the fire time the community is coming out with a very good initiative, honestly this as shown how well the community is and I still want to believe that more is to come definitely

I surely await to see that very soon. Cheers man

Wow, always improving non stop, I love that❤️❤️.
I will test out the alpha.leofinance.io today.

did you test it out? how did it go?

This is great from the team, more grease to the elbows!

Simply lovely with the community pages. The work the team continue to put on development is astonishing. Much commendation

Will it be a cap on the pages or we could have almost endless such pages?

LeoFinance community pages is a terrific development in the cryptoverse. Converging all crypto communities on Hive is one creation that would print LeoFinance's identity in gold in the history of blockchain technology transformation and evolution.

Would certainly lookup the community and give my feedback too.

Wonderful ,these are the developments we want to hear

It's something that we have needed for a while and once the bugs get worked out they will be amazing.

These are impressive development works you are doing. All for the good of the whole community and those who are yet to come aboard. Will test the alpha UI and send bugs if any.

Everything else you've done is sweet, so I'm sure this will be too. Keep on breaking stuff!

lol. I tried to ignore that part.

I dislike the fix it because you broke it way of improving things, but, it does seem to work...

Sometimes it's the only way 😄

My seven year old likes to "cook" but he "makes up his own recipes."

He did not believe me that you can't cook sugar and syrup and chocolate together and get a cake. I insisted he needed at least some flour... I let him mix all those sugars together and bake them in his pan.

It was a gross mess that was hard to clean up.

Great development!! Let's show the world what web 3 feels like 🚀🚀

Glad the community pages is coming true and back to life better.

I look forward to using the community pages feature when it's fully up and running.
This will come in handy for that 'at a glance' tracking of a communities' growth and development.
The price tracking for each token is a nice touch.
Thanks for all the dedicated work!
!PIZZA

I am speechless to see the great development that leofinance is having, whether in the defi part or in the blogging part, leofinance is the tip of the spear when it comes to innovation. I'm glad to have a front row seat.

Another new development, definitely checking this out

Going to test it out. Is the Splinterlands community also in alpha testing?