My first Cine post: Let's talk about 'The French Dispatch'. 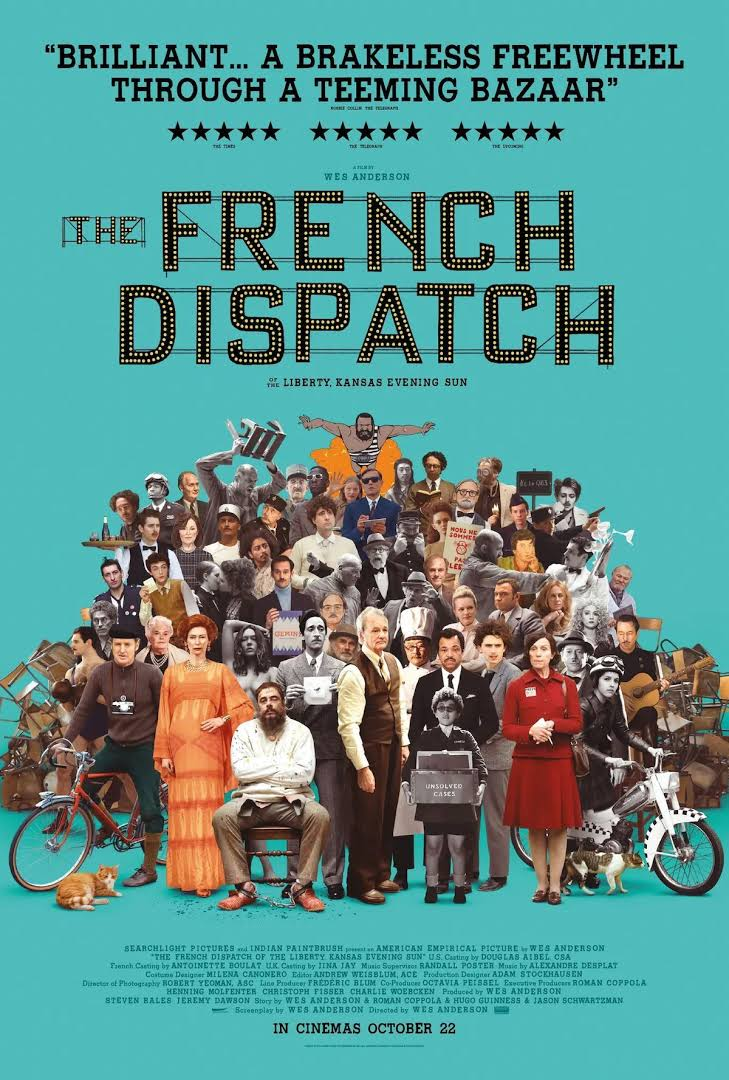 Isn't going to the cinema one of life's greatest joys? To quietly nibble away at your popcorn as the lights dim, to collectively get annoyed at the noisy fool who comes in late and makes a fuss, to sit anonymously in a large group - all for the singular purpose of watching the world come alive in front of you. Given the COVID situation, my cinematic joys have been limited of late, and, after many, many, many, many months (was it 18?) of not being able to attend a film, I have just recently attended a screening of 'The French Dispatch'.

Heading into the film, my wife told me, 'It gets mixed reviews'. Yet, for whatever those critics said, we loved it.

The film itself is structured in five parts. Each of these parts are articles in the paper, 'The French Dispatch' - in what is the paper's final ever print run.

The film opens on a bicycle tour around a fictional town - the language is delicious and I couldn't help but chuckle at the amusing anecdotes which are presented in such a sincere reporting style. This was probably my favourite part of the film.

The next part concerned a psychiatric facility, which kind of sends up an art connoisseur who through marketing, creates hype around a new style of art from the in-mate - the part is thoroughly amusing in its absurdity. We meet the artist painting a female nude, at the end of the session, she puts on her guard uniform, and she helps him back into a straight jacket. The absurdity continues in a delightfully comic way through this piece.

Up next - a story about a young revolutionary and his manifesto. This part was again hilarious in its removal from reality - as chess moves are called between the barricades to find the victor of the battle!

We're then offered the cooking section, which ironically, is not so much about cooking, but a crime fiction somewhat connected to a famous chef. This part felt a bit long, but it was entertaining in the way it was shot.

Finally, the film draws to a conclusion at the editor's obituary. The writing team sit around and each contribute to it - in much the same way the film is indeed their contributions to the magazine.

This film was delightful, and the metatheatricality of the text made it so charming. The characters were woven so well, that the bizarre becomes so real. The way this film was shot is by the director is nothing short of breathtaking. I could watch this film again and again and each time, I'm sure I would get something new from it.

My only qualm, my French isn't what it used to be - I'm sure many of the French language in this film (signs on buildings, pop up notes etc) would have added so much to my enjoyment, but I couldn't quite think of what they meant. The town explored in the bicycle tour, for instance is Ennui - which means boring, yet ironically, it was the opposite.

What an absolute delight! A 5 star night out at the movies!

This sounds like quite a wacky and offbeat film!

Thanks @sketchygamerguy. It really is a cool film. Worth the look. Thanks for the upvote.

This post makes me wish I spoke French just so I could go watch the film!

I love it when a movie gets mixed or bad reviews from critics, yet it rises to more than meet my expectations.

Morning @papacrusher - sorry, I may not have been clear in my review. The film is in English, with some decent name stars in it - Owen Wilson is the bicycle tour man, Elisabeth Moss is the secretary. Tilda Swinton pops in for a part. The setting is a fictional French town, and it has a 1960s French vibe - but it's 99% in spoken English.

That is so awesome! lol it was more than likely my reading comprehension and NOT your writing lololol Owen Wilson is one of my favorite actors and I really really need to see this now!

Thanks for using the cine tag!

What a wonderful cinet post! You expressed the feeling of going back to the movies and enjoying this film relatable to everyone! Thanks for using the #cinetv tag!

@cinetv.curate - I have a cheeky confession. Reliving the film as I wrote it up was awesome - it's good to be reflective, but how often do we watch something and then forget about it? Thanks for the comment. I plan on using the #cinetv many times again in the future. Thanks

Love all his films....love Bill Murray....this is a must watch!

Being your first film commentary text, I think it is quite good, although it could be improved. For example, mentioning its director, his performances and narrative achievements.
The French Chronicle, title given in Spanish to this film, has not arrived in my country, but I hope it will, since it is directed by one of the most brilliant recent filmmakers: Wes Anderson and a first class cast.
Best regards, @lordtimoty.

@celf.magazine - Thanks for the time for your feedback. I look forward to writing another post in the future. Will take on your tips. Until then, I was able to find your community and have since joined it. Thanks so much, Tim.

Thank you for this post, I will see where I can find it and give it a try. I was a bit hesitant as I thought it was in French first, but reading @papacrusher's comment I now know it's not. I did see a French movie not too long ago that touched me deeply though. And your passion for the French language you seem to display here made me realize that that movie is worth reviewing.