Learn the basic Tips, Strategies and Combos for the Death Splinter, using only your free Starter Cards! Climb ranks now! In the lower leagues, the Death Splinter is mainly known for its mana-cheap, efficient monsters. You'll learn, in this guide, how to use the available Starter Cards (those ones that are available after buying the 10$ Summoner's Spellbook) to build a strong deck, enough to climb up to the Silver League. Both Death Summoners don't give a BONUS to yourself, they give a DEBUFF to the enemy team. Because of this, they're both risky in the sense that you can control the cards you're going to play, but you you can't control the cards your opponent will play, and he can end up playing cards that won't be affected by your debuff.

Zintar Mortalis is the most popular Death Splinter for the sole reason that his ability is giving enemy Melee monsters -1 Attack, and melee monsters are the most common and always used in low ranked matches: in the worst case scenario, your opponent will play 1 melee monster as a tank; in most matches, players usually play several melee monsters.

The other Death Summoner is Contessa L'Ament, and her special ability is giving enemy Ranged monsters -1 Attack. It's still a very strong ability, but it's dependant on your enemy actually playing several Ranged monsters to actually be useful; and you can't be sure if the enemy will play enough Ranged cards for her ability be worth. In the majority of games, you'll be using Zintar Mortalis. The Haunted Spirit is a very efficient tank due his mana cost: he costs only 5 Mana to play and has a very large Health of 7. Not only that, but he has the "Heal" ability, allowing him to heal himself 2 Health per turn. In low-mana matches, in which both players play only cheap, weak cards, the opponent won't even be able to deal 3+ damage per turn on him, so he'll just outheal the attacks and become effectively "immortal".

Another strong alternative for your frontline is the Bone Golem: he has the "Void" ability, protecting himself from Magic attacks. If you think that your opponent will play lots of magic monsters (for example, if he's playing several games as the Water splinter in a row), the Bone Golem will give an easy victory to you. Your main weakness, in terms of tanks, is that you don't have a monster able to defend himself against several attacks at once. Other Splinters have more mana-expensive tanks with more Health, more Armor, or with special abilities that makes them more resilient (like Shield), while your tanks doesn't. In a high mana match, your opponent will play several strong creatures that will be able to kill your tank with relative ease.

You can also play the Elven Defender as your tank. He is a Neutral card (so he can be played by any splinter); he cost only 1 mana more than the Bone Golem, but he has 3 Armor and 8 Health.
If you're looking for cheap cards to strenght your collection, you can buy the Goblin Mech for 2.20$ only and use him as your tank: he has 5 Armor, 6 Health and a very solid 4 Melee Attack. These two monsters will be the ones you'll use the most: in virtually all your games you'll play the Twisted Jester and the Skeleton Assassin.

The most popular Death Splinter card is the Twister Jester: he is incredibly cheap mana-wise with a cost of 4 and has 2 Ranged Attack, 3 Speed (fast enough to attack before the majority of the monsters), has the Snipe ability allowing him to kill the opponent's Magic and Ranged units. Besides all of that, he still has a generous Health of 4, allowing him to absorb some damage before dying.

Ranged units from other splinters cost more, have less attack, and lower health. The Twisted Jester is incredibly powerful. Use him.

You'll also end up using the **Skeleton Assassin" in almost all your games. He's very similar to the Jester: he also has low mana-cost (3), high speed (4), and the Sneak ability that allows the Skeleton to attack directly the enemy backline, bypassing the tank. You also have other cheap monsters that also could fulfill the Damage Dealer role, like the Haunted Spider and the Undead Badger. Use them if there's still some mana left after building the rest of the team.

Again, your main weakness is that you lack strong damage dealers for high mana matches. The majority of your monsters are cheap; they're incredibly efficient, that's true, but they're still not as strong as a a 6-mana or 7-mana monster that has high health and high damage.

Another weakness of the Death Splinter is the lack of strong Magic monsters. If the enemy plays a lots of monsters with high Armor, or the plays Tyrus Paladium (the Life Splinter summoner that gives +1 Armor for all monsters), you'll have a very hard time killing them.

If you're willing to spend a bit of money purchasing better cards, I would recommend the Grim Reaper (1.90$, 3 Ranged attack), the Octopider(3.6$, 3 Ranged attack) and the Boogeyman (4$, 2 Magic attack). The Boogeyman is specially powerful due his "Slow" ability, reducing the Speed of all enemy monsters by 1.) The Undead Priest is another card that you'll play in the majority of your games as the Death Splinter.

It is a VERY cheap card to play (only 2 Mana!) and it has the powerful ability "Weaken", that reduces the health of ALL monsters of your opponent.

This ability will make killing the enemy way easier with your cheap, low-attack monsters: instead of having to deal 2 damage (for example), a single 1 damage attack is enough to kill; similarly, instead of spending 2 turns attacking a 3-health monster, your Twisted Jester will be able to snipe him in a single shot.

Remember that the Undead Priest will remove 1 health from all the monsters your enemy is playing. If your opponent plays weak creatures with only 2 health (like one usually do in low-mana matches), 1 health is half the total health! In the other hand, if your opponent plays strong monsters with huge health, removing 1 from it won't matter much.

So, again, the Undead Priest is a strong creature for low mana matches, but not so much for high mana matches.

As you saw during this post, the basic Death Splinter Cards are really strong in low-mana matches. Your win condition will be playing lots of mana-cheap cards that are able to pack a punch and stand the incoming damage for a few turns while you decimate the enemy monsters.

But, in high-mana matches, you will lack expensive cards to play. It won't matter if you cards are more efficient in terms of mana/power: the opponent will simply play more expensive cards and win the game.

After this guide, you already have a basic understanding of the main synergies of the Death Splinter, using the summoner Zintar Mortalis to weaken the opponent's attacks so your own monsters can stay alive until they can get some kills.

With this strategy and knowledge, you'll surely be able to climb on the Bronze League in no time!

Thanks for reading this article, and until next time! 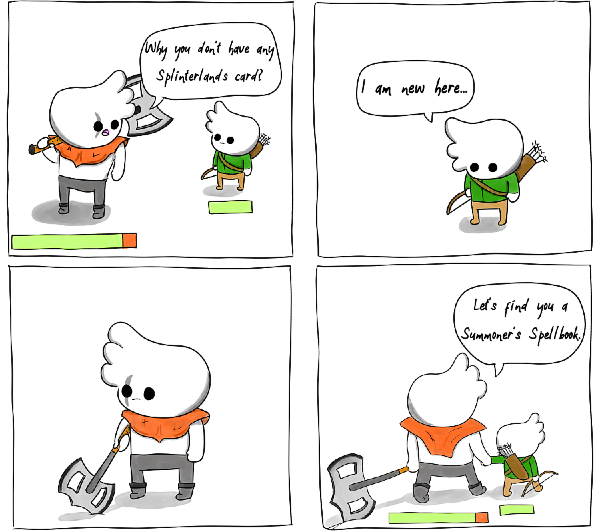 Once I have verified the referral, I'll send you some cards for free to use on your first weeks in the game to help you progress faster through the Bronze League! Using my Referral link doesn't cost you anything extra and will make both of us stronger 💪!.

This is very helpful for a newbie like me, thanks!

I've also found Nightmare to be an effective tank for Death splinter and she is also quite cheap. I've seen lots of love for Grim Reaper as well but I've never been successful with him.

Hey Luizeba, these are some of the best complete newbie guides I've found. Particularly given how insanely card prices have increased since most of the others were written. Thanks for the great content.

Used your referral link to sign-up. (though it sounds like the mobile app by have failed to attribute it. I asked support to fix it and they said it's added now).

What's your username in-game? If it's @Wulee, it's still not showing up on my end.

But, either way, confirm me your user and I'll delegate to you some starter cards for free, regardless of the referral stuff :)