Just throwing together a quick progress report due to the misinformation currently circulating on Hive.

I was powering down to cover the additional costs that were asked for the development which, ownership would have remained with dev team and ongoing costs associated. I have exited bro because who talks smack about a man's wife and revokes right of reply? So I sold my bro, bought Leo and powered up and moved more to HBD.

From the start and every post created it was about meeting regulations at the time and I have since received accreditation, establishment of a consortium and further work.

We are and have been on track as to the published and available business plan.

In fact a community was launched in preparation and I have some community forums to present at for on boarding.

There was also substantial funds paid to wasm developers prior to the Terra (Luna) Crash as everything was being developed outside of Hive.

With the Luna crash as mentioned in previous progress reports, we got wiped and I've been rebuilding funds and paying from my own pocket to continue work.

I also made a bad decision in coming to Hive, but as I was a Hive Maxi I thought it would be a good idea. After the behaviours over the past few days I thought it would be best to go back to wasm and revisit Cosmos chain.

But people were up in arms about the move so we will continue on Hive but I can't see it succeeding well on Hive.

Given the occurrences we will progress the NFT Marketplace to fulfil that obligation on Hive and then seek to implement cross chain functionality on Juno.

You were put into timeout for 24 hours, something I never do, for driving everyone nuts for the last few weeks.

I don’t see any other timeouts after mine so that’s a display bug in discord.

I'm not interested in what you have to say

Why do you continue to downvote trail that retard SuckySuck? You don't seem to be buddies anymore..?

I honestly wouldn't worry about Marky. He isn't worth the trouble. Why get worked up about someone you'll never see or meet? He's just always going to be on Hive as a director of it. It's his asset he can do and act as he pleases.

You are not answering my question.. Why are you downvoting me?

Get to know Marky and his scummy downvote circle, that are terrorizing all of Hive! Marky downvotes self voters where he can, APART from his bootlickers! His 'circle', as I call it, is protected by the accounts themarkymark and buildawhale! Learn how they operate - Learn how they could mob you off of Hive here: 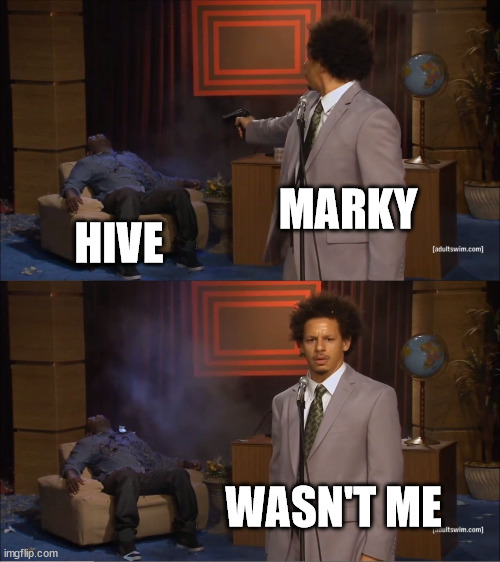 Sounds like a huge mess and I hope it gets all sorted out soon.

Awesome stuff, let's just all watch Marky self destruct and lash out and zero this account.

Since my name appears in one of the above screenshots, I wanted to clarify something -

For some bizarre reason, @melbourneswest "airdropped" me 19M Skippy, and somehow thought I'd distribute it on his behalf, though I'd recently voiced my negative opinion of his coin in the Man Cave discord. Shortly after I discovered it in my wallet, I sent it back.

Just to be crystal clear that I have absolutely nothing to do with this person or project.

Sorry Traci that is a lie, please refrain from misleading and defamatory content. You attacked the entire project and there have been a number of attacks launched by you and ongoing issues in the background.

Since you've appeared and made a comment that is Immutable. I'd appreciate you not bending the truth.

You were also airdropped because a number of people thought they could do better.

@traciyork 74
about 2 months ago

Congratulations @melbourneswest! You have completed the following achievement on the Hive blockchain and have been rewarded with new badge(s):