Mistakes are portals of discovery, if you are wise enough (A Portal Spinner Splinterlands battle challenge /+contest) ***If you read until the end, genuinelly comment with what you think about this post, and you will enter automatically in a raffle to win a Gold card. Winners announced in the next week battle challenge post. The last winner was @luizeba, and the Gold Pelacor Deceiver was already sent to him/her.

Splinterlands is a card game, similar with Hearthstone, where you can play battle against other players to get a better rank or in tournaments. It is a NFT game based on Hive Blockchain, with multiple ways to capitalise and make money, real money, by playing it or trading in it. You can start earning as soon as you buy a Spellbook ($10) getting DEC tokens and NFT monster cards via daily quests and season quests (every 2 weeks). The airdrop ended. You can still get some rewards staking all you SPS for a 32.85% APR right now. Holy Molly! I got one validator, and all the licences from the pre-sale were sold in 12 minutes. You can buy one in the Tranche 1, paying $3000 in SPS. You can get it much cheaper (around $800 less) if you buy 500 Vouchers and use them when you buy a licence. Another way to make profit is to rent cards, getting paid in DEC tokens for it. But, my, oh my, the renting price right now is so, so low. Check the contest at the end of this post! We can buy still Chaos Legion packs with 4$, using just DEC, for a 45% discount right now (something like $2.10 per pack instead of $4). Even then, if you want to get the extra packs, you still need vouchers, but just for the bonus packs. An awesome hint from a really good player (not me), if you open your packs after the Legendary summoners are introduced, you have a small chance to get them from the packs. It was announced that Lands NFT and Riftwatchers pack are coming in the third quarter now, with the new Roadmap proposed by Splinterlands. Just check this awesome page about what are the Lands supposed to do. 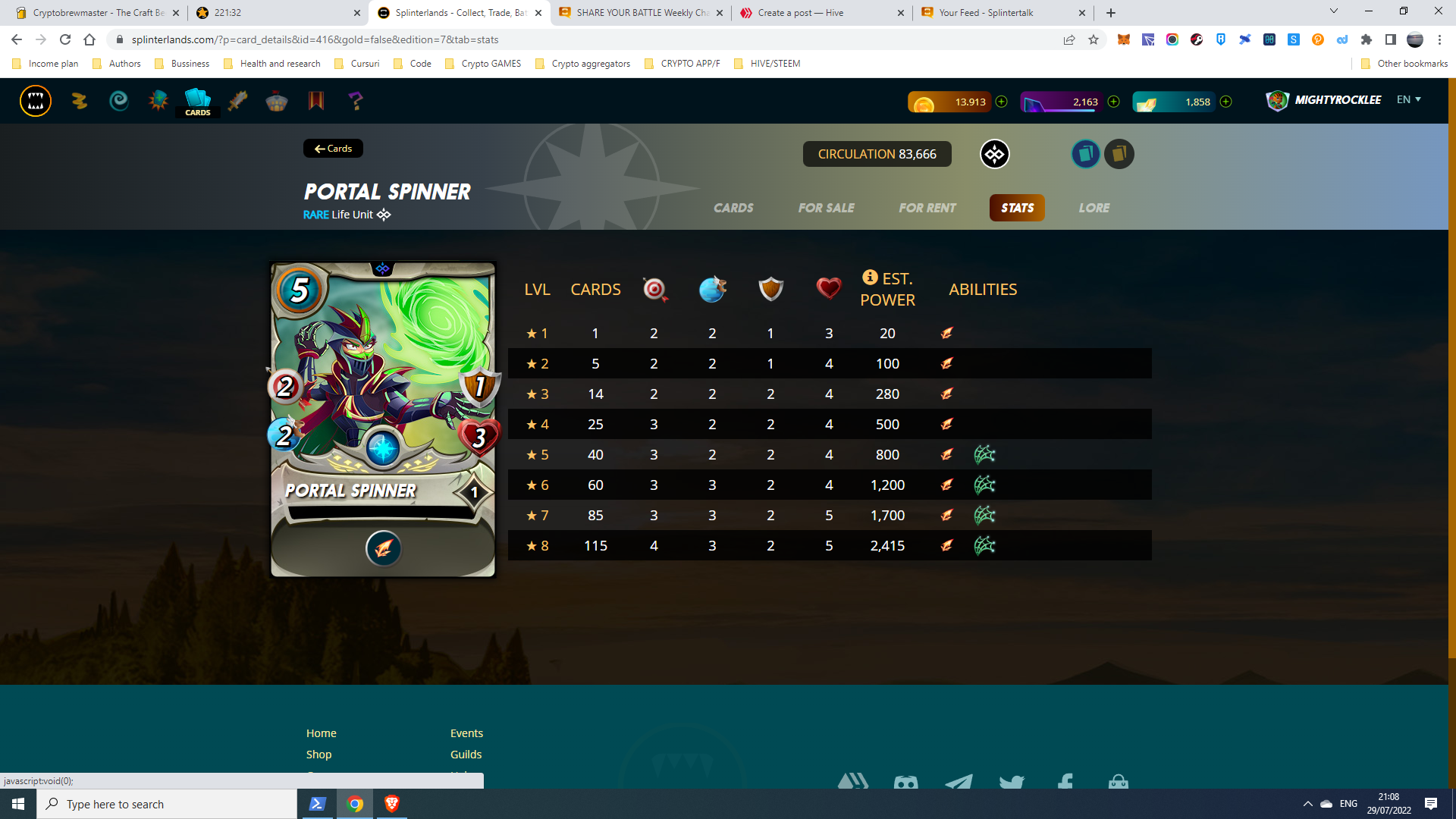 The Portal Spinner is a Rare Life Splinter unit, with 4 Ranged Damage, 3 Speed, 2 Armor and 5 Health at max level 8, with Scattershot Skill at level 1 (hit a random enemy target - useful to bypass tanks with Taunt) and Snare at level 5 (remove Flying ability), all for 5 Mana cost. While 5 Mana is getting this card out of Little League Ruleset, can be quite useful for Rulesets with Blast, for example, and can be boosted an extra +1 Ranged attack by General Sloan (Life summoner). 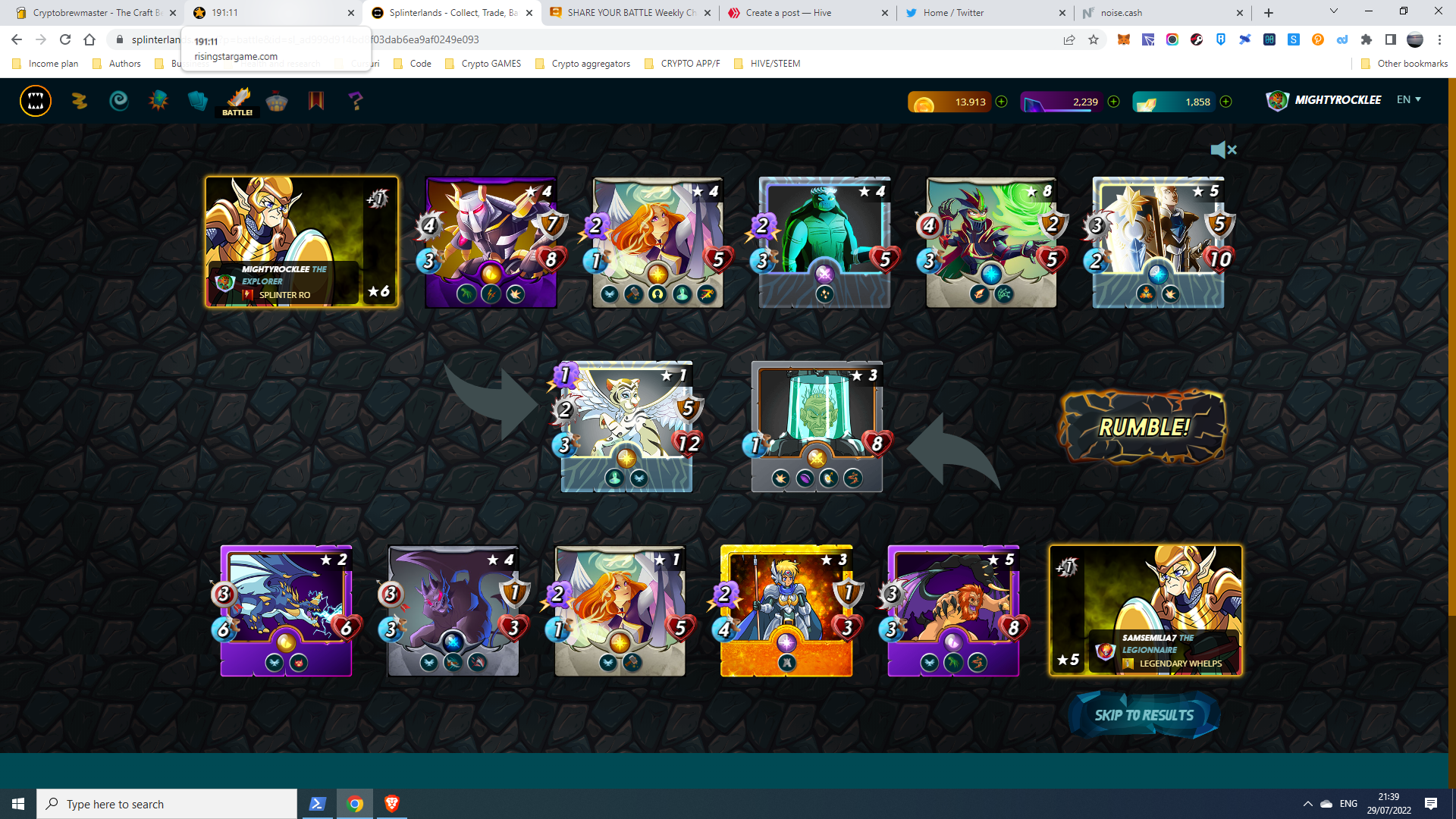 (To see the video, you can check the battle link.)

So, for the challenge, this were the starting conditions:

Rulesets:Earthquake (all non-flying monsters take 2 damage per round)

Mine - Summoner: Daria Dragonscale, boosting +1 Melee Damage, with Kralus as main tank with Immunity to Poison and Flying, Carnage Titan off-tank attacking from the second position with Reach, Shield and Double Strike, Adelaide Brightwing with Repair, Ressurect, Immuinty and Flying, Tortisian Chief with Tank Heal, Portal Spinner with Scattershot and Snare, and last position - Shieldbearer with Taunt and Shield.

Opponent - Summoner: Daria too, with Melee Damage boost, with Lord Arianthus as main tank with Shield, Void, Magic Reflect and Thorns, Manticore as off-tank attacking from the second position with Reach, Flying and Thorns, Defender of the Truth giving all +2 Armor using Protect, Adelaide Brightwing with Repair Armor and Flying, Gargoya Devil with Flying, Deathblow and Close Range, and Lighting Dragon last with Flying and Stun.

Round 1 - His Lord Arianthus died and many blows were exchanged between both teams.
Round 2 - I managed to kill the Manticore and the Defender of Truth, and my Shieldbearer died, but was ressurected by Adelaide.
Round 3 - My Tortisian Chief was killed by the earthquake, and his Adelaide fell to my wrath.
Round 4 - His Lightning Dragon was ensnared and died by earthquake, and I managed to kill the Devil. Victory!

Star of the game - The Shieldbearer, resisting heroically to all the enemy team hits, one after another. On the side note, my continuous support for Splintertalk.io is going well, with my SPT tokens number raising over 1 million. All of it is delegated to @monster-curator, as this account is doing a great work curating the best posts on the forum. I have finally reached the needed SPT power (110K at the moment) to manually curate on Splinterlalk.io. Also, working on acquiring 50K Oneup (40100 UP now) next, inspired by the Cartel efforts. Bought 200K Level too, for PsiberX airdrop, as I also managed to round up 100 Hive to buy a piece of Land in their game. Got 4 PsyberX packs already on airdrop in the last 3 months. Happy to have them!

Also, if you are posting on Publish0x and Read.cash blogs, and you liked the Chifibots game mentioned in the latest OneUp Cartel posts, there are still 4 prizes to be won if you want to get some of their NFT packs on this contest, open until the day they launch. We are closer than you imagine!

All the best, George

...get the higher rewards for your investments using Blockfiand Hodlnaut . Get crypto while writing on Publish0x blog, using Presearch search engine to maximize your income with PRE tokens. Use Torum instead of Twitter . I am also writing for crypto on Read.cash and Hive.

Good write up and you seem to be killing it with all your blogging and gaming! I really want to get a node too but I just cant sell any crypto atm! Really like the scattershot ability too with (chaos dragon my fav) with blast at level 2!!! Cheers, Tommy from Torum!

Nice level your cards have

i tried to upgrade the legendary, and now i am at epics and rare.