A Frightening encounter that turned into the best one yet

@misslasvegas 72
about 2 months ago
The CTP Swarm
When I was writing my EcoTrain Question of the Week post, I thought of this encounter I had while drifting around in a tiny little catamaran, all alone at sea. I first wanted to include it in the post but realised it would become much too long, and I didn't want people to stop reading or fall asleep haha. So I decided to cut it out and keep it for another post. Well, that time has come. Here it is. One of the most profound encounters with nature I've ever had, and one I will never forget for as long as I live. 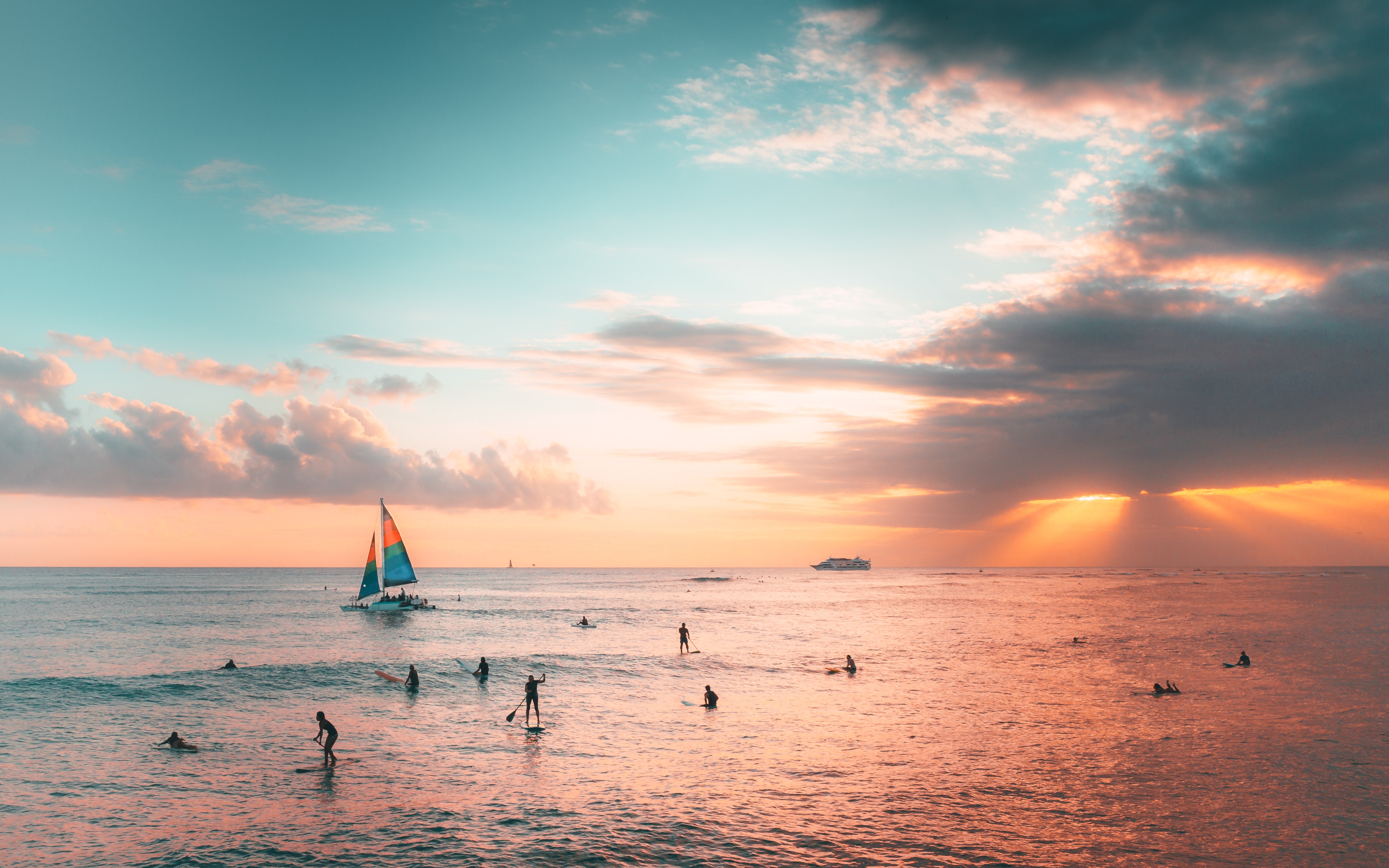 In the EcoTrain post earlier this week, I wrote about how I met two airline pilots who'd take me on sailing trips whenever they were around, and I managed to get myself to Sentosa to meet them.
I had quite a lot of time on my hands, no real obligations towards anything or anyone, so I took advantage of that chance often.
They were really lovely guys too, so I really enjoyed their company as well as the time spent out on the water.

After a few weeks of going sailing with one or the other a few times a week, they trusted me enough to let me take the boat out on my own whenever they weren't around. I felt like a Queen on the water! Needless to say, I took advantage of that any time I could! There are some smaller islands not far from Sentosa, some belong to Singapore, some to Malaysia, and others to Indonesia.

I'd always at least try to get close to one of them. The Singaporean Islands could be found in short time but the others were a bit further away, with nothing much in between. Most of the time, I would just sail for an hour or 2-3, 4 max, but sometimes I'd take off at early dawn, and wouldn't return until just before the sun would set. I needed to calculate the times precisely because I really didn't want to be caught out in the open sea in the dark.

Then one day, I decided to leave quite early, and sail towards one of the Indonesian islands. I knew I'd be gone quite a while, so I packed lunch, and made sure I had plenty of water with me. I set out on my trip.
After some time, an island appeared far in the distance. For me it was guesswork which island this would be. It was still quite the journey, and I had no intention to go on land. I decided to drop the sail, have some lunch, and just to enjoy my surroundings. I was laying on my back just enjoying the sun, while the boat was softly moving with the waves.
I must have dozed off for a little while because when I opened my eyes, I saw that I had drifted quite a bit further from the island than I had anticipated.

Panic rose up in me. Not much because I knew I was still OK timewise but enough to make me come into action right away. I wasn't that experienced either, so one little mistake like this could cost me dearly. The thought of not being able to make it back in time, or worse: to get lost at sea was making my heart race faster.
There I was, in my own little bubble, all by myself, cursing myself for being so stupid to make this trip on my own. I needed to make my way back. I had at least two hours to go. And that's when I saw something in the water.

It wasn't very close so I couldn't see it clearly, but it was larger than the average fish.
I remember vividly what I thought right that moment because instead of fear, the joker came out in me: "Maybe it's just a giant tuna fish!" came to mind. But this sense of humor quickly turned into horror when I realized that this definitely wasn't a tuna fish. He or she disappeared, and while I was trying to spot where it had gone, true panic gripped my heart. I was considering my options. There were none. Other than staying on the boat. A Hobie cat isn't the strongest of all boats, but it takes quite a bit to make it turn over. Whatever it was that was out there would have a tough time doing that. Thoughts to calm myself down. Panic wasn't going to save me.
The animal showed himself again, a bit closer this time, and only briefly, before he dove back under.

All sorts of thoughts went through my mind of what this could be. In my head I was going through the list of kinds of sharks that were known to frequent these waters.
I really didn't have a clue! Australia is quite far from the Singapore Straights, but not far enough to make me feel better. This could truly be anything.
Where's Captain Nemo and his Nautilus when you need them?

My heart was racing like crazy, and meanwhile I needed to keep in mind that I couldn't waste much time either so I decided to try and sail back towards the island instead of back to Sentosa.
It somehow seemed like the safer option. 'At least there'd be a chance that my body would be found' the joker in me spoke...

Well, panicking while trying to hoist the sail, while also trying to keep an eye on your surroundings is not a good combo because the sail got stuck and trying to solve this made the boat bounce around more than I needed at that point.
From the corner of my eye I saw something move in the water, only about 15 meters away from the boat. Maybe even less. It seemed to circle the boat!

God!! Well, this was the time to start praying, and I nearly cried when I asked my grandmother and grandfather to help me in this situation.

I moved my head slowly to follow the animal and the direction it went in. I was afraid to make any sudden movements because whatever it was, I didn't want to attract any more attention than I already had.
In my mind I saw scenes from the movie Jaws with me as the 2nd main character, after the evil shark. The stupid girl that went out to sea on her own, despite the villagers' warnings.
Sure, there were no villagers who warned me but let me have this one, ok?

It dove under again and disappeared for a while, only to show back up on the opposite side and moving towards the boat, closer this time.

I was looking for that one unmistakable sign: a backfin.
And to my horror: I found what I was looking for!
At this point I thought I was going to faint because not only had I discovered that I was being haunted by a shark but the heat of the sun was getting to me, and the breeze somehow didn't cool me at all. Splashing some water on myself was not an option, as I would need all the water for drinking in case I would be stuck here much longer.

By the feel of it, it was probably around 2 or 3 pm, making my chances to make it back to shore to Sentosa before the sun would set quite slim.
I was not even close to the island, and I was afraid to go anywhere at that moment.

The fish slid back down under the water, moving away from the boat.
Then he made a sudden, weird movement.
A jump!
I let out a big sigh of relief. 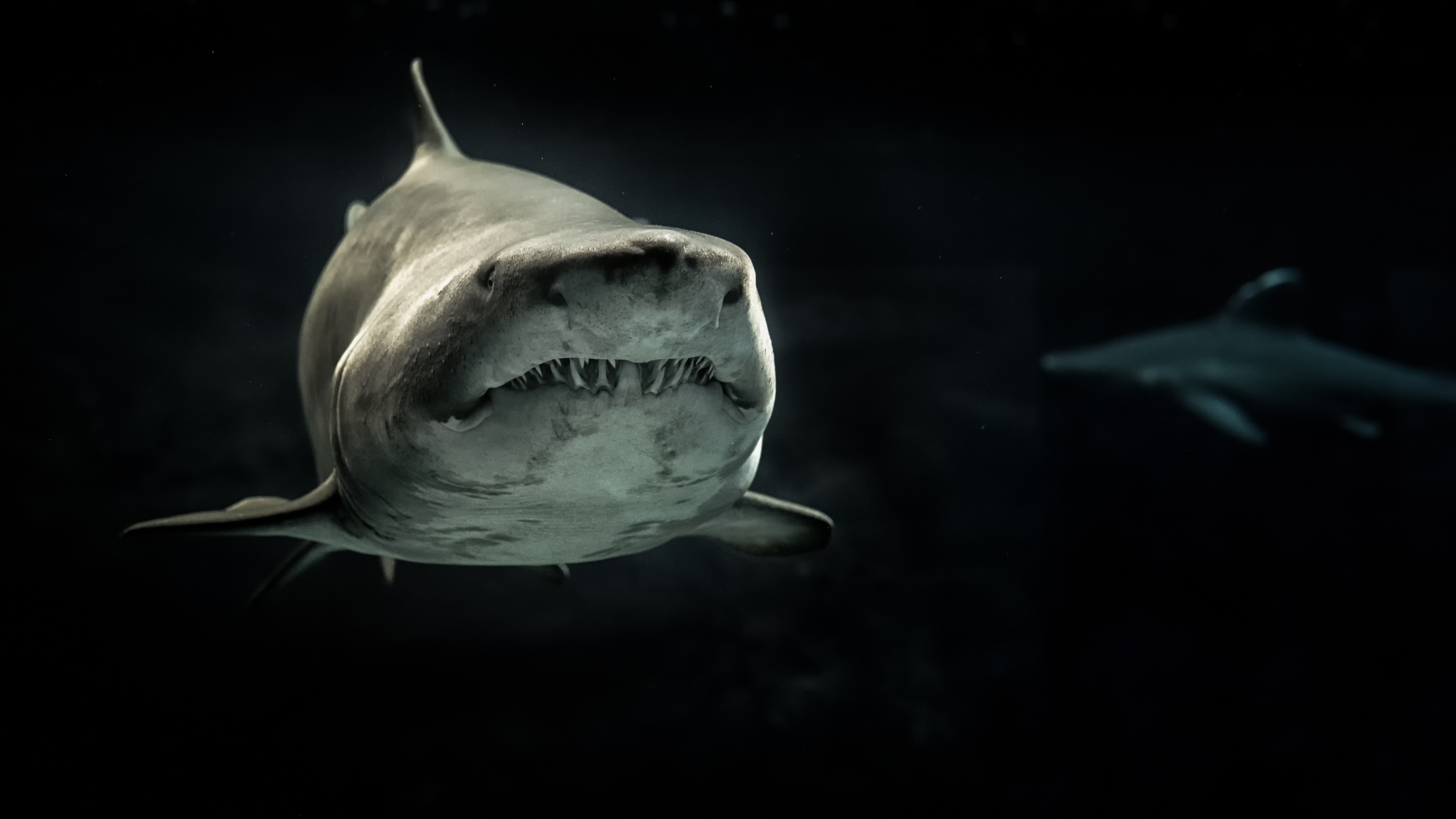 It wasn't this guy!

I knew that most dolphins lived in pods.
But I was sure he was alone, so most likely a male.
I knew that he could be dangerous too, although probably much less than a shark would be, but somehow all fear fell from my body.
I calmed down a bit, thanked my grandparents for looking out for me, and tried to gather my thoughts.

The best thing to do was to sail back to Sentosa.
At this point I just really wanted to go home.
I yelled at the dolphin that he shouldn't scare people like that, and that we could be friends if he liked.

I fixed the issue with the sail, hoisted the main sail, and set off for Sentosa. My newfound friend decided to glide alongside the boat, at a safe distance for quite a while, showing off his jumping skills every now and then.
Maybe he just wanted to make sure I was OK.
In my head I was writing a short novel:

"The stupid girl, the dolphin and the sea..."

About half an hour before I set foot on land in Sentosa island, the dolphin showed his playful jump once more, dove under and disappeared for the last time...
It had been the most scary, and later the most beautiful and impressive experience in nature I ever had, and it will probably take quite a bit to top that. Let's hope the next one will be with a friendly creature too! @therneau 64
about 2 months ago (Edited)

In my head I was writing a short novel:

"The stupid girl, the dolphin and the sea..."

Yeah, it was really, REALLY scary!
My worst nightmare is getting eaten by an animal...
Yeah, those cats are really too small.
They might withstand a few pushes and I don't think they'd flip
over any time soon but just trying to hang on if something happens
is another kettle of fish I think. But yeah, that could also just
be me imagining the worst kind of Jaws movie where he eats a boat haha.

@lizelle 76
about 2 months ago

Lucky escape and a nice surprise, but I can imagine how frightened you must have been thinking of those Jaws!

Yes, I can't even tell the story to people without a shiver haha.
I was really lucky. Even dolphins can be dangerous when they want to be.
He was a nice one! Later some friend of mine said that maybe he came to
help me because there actually WAS a shark. But I quickly put that out of
my mind. Just let me think he was there because he wanted company haha.

Quite an experience, I wasn't there but I developed a feeling of chill down my spine, until it was discovered to be a dolphin, phew.

This story ended up well, but you and I know that it could actually be like the first option you were thinking about. I am so glad you are safe. Stay safe and have some !PIZZA.

Thanks a lot for sharing this story. I enjoyed it (and frightened!) very much. Best regards,

Jules Verne would have approved of this adventure!

I certainly would have been scared. I not sure I would be over it yet. Thanks for sharing on ListNerds

Have a peaceful day.
!CTP