I also like round numbers. There is a little bit of OCD in me somewhere underneath the surface.

That is why I am very happy to reach this goal. 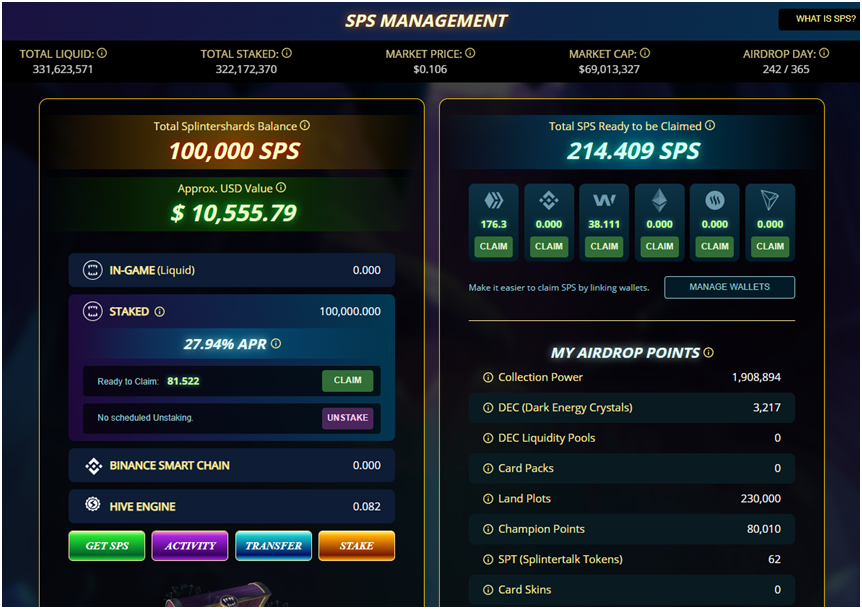 I can't say that it's a target as I didn't do anything to earn it. The beauty of SPS is that it just builds up every day without any need to touch it or do anything with it other than claim and stake.

From along way out i wanted to have 100K staked to my account.

A lot of people are giving out about the price continuously dropping but I' always of the long term mindset.

Stake and earn. Come back in two years and check the price.

We are still only two thirds oft he way through the splinterlands team pouring out free SPS to everybody involved in the game with little reason to hold outside of interest.

Short term mentality is to sell everything and take the money.

In five years of operating in the crypto space i have never seen another team to have developed so much and done it so consistently.

I'm not saying perfectly as we all know there were some bad moves during the year but they have kept moving forward in good times and bad.

Built, innovated, expanded and connected to other groups.

All positive signs for the future.

For fuck sake, all of our assets went at least 10 this year and people still complain.

Just get the head down and keep stacking. It should pay off in the end. It usually does on a solid project.

SPS is just another leg in the journey and as the team has kept delivering value to the game then I am happy to take that bet.

100K is not a huge number but it's enough to make a difference in the future.

There is a lot more to come in 2022 so I'm just happy to be here waiting for it.

All part of the bigger picture.

I'm happy to hit my first target but that just means that it's now time to attack the next level up instead.

If you haven't played the game before then now is the best time to join. Today is much better than tomorrow and a lot better than later.

Cards worth a few cents now will have a much higher value in the future as the print runs out. We have a strong community and seen this happen every time as it grows with the game.

Link to the game here,

Congrats! I'm trying to do the same thing before the airdrop ends but its going to be close unless I decide to just buy my way in.

lolztoken.com
I watched a documentary on Marijuana last night…
…that’s probably how I’ll watch all documentaries from now on.
Credit: reddit
@niallon11, I sent you an $LOLZ on behalf of @imno
Use the !LOL or !LOLZ command to share a joke and an $LOLZ. (3/10)
0
0
0.000
Reply

It's good to have a target for the end of the airdrop.

I did sell some in the early days but went 100% staking as the prices dropped.

I thinks it's worth more than 10c so i'm not willing to sell at these prices.

I'm hoping so too. I was selling cards to hold dec to push me over the edge in SPS but as soon as they announced the rewards pools were doubling, DEC became toxic. These Devs just can't get out of their own way. We might not see much value return to SPS until land comes out at least a year from now. 😡

lolztoken.com
What's the difference between a cat and a frog?
A cat has nine lives, but a frogs croaks every night.
Credit: reddit
@niallon11, I sent you an $LOLZ on behalf of @imno
Use the !LOL or !LOLZ command to share a joke and an $LOLZ. (6/10)
0
0
0.000
Reply

Or as I always say.

These are tokens for nothing so you can't really lose in the long run. Hopefully it goes back up in price but even at 10C that's 6 months wages for holding cards.

You have to love crypto some times. Crazy stuff.

Yep if you are on the right token at the right time, there is no better feeling.

Wow, 100,000 is a lot.
Congratulation for achieving the target!
I believe SPS price will bounce back after Airdrop and Riftwatcher pack released.
I start to see some burning mechanism for SPS in coming months :)

I believe SPS price will bounce back after Airdrop and Riftwatcher pack released.

I'm thinking the same as you.

When the supply runs out and we see land soaking up some of the tokens then the price should keep growing over the next few years.

It's all about long term planning and not panicking in the early stages.

that's pretty crazy! I have earned just over 1000 sps. But that's a good number for me. But I'm feeling the urge to get into the game a bit more

It's all about perspective.

When i joined hive it took me nine months to earn my first 500 HP.

Now that is monthly.

You build up a position over time and then before oyu know it you are playing in the next league up.

Just like splinterlands when you keep building and growing you account over time it speeds up a lot. I put in money a couple of years ago before it was big and things went up from there luckily.

You will get there too over time.

Splinterlands asset prices are up so much and even the rental market got revamped so people can earn more income. So I also think Splinterlands is on the right track to letting people get more out of the game. As for SPS, I am just stacking what I get from my airdrop but I haven't been doing much outside of that.

That's nice you have a tidy stack of sps. Every day I get about 3. I just let it accumulate a bit more, then I transfer to HE. It be nice if it can reach $0.35. once there's more use case it can skyrocket !

Many Many Congratulations! This is so freaking awesome mate. 100k is a big deal. I am pretty sure SPS is gonna make your so rich :') It's selling for so cheap right now!

I am pretty sure SPS is gonna make your so rich.

I would love to see it hit $1 again some day but i think it will be a couple of years before it grows to that level. Over time it should steady and grow as the game gets bigger.

Yes, Just like Hive, I am betting on Splinterlands for the next 5 years. Hopefully, they reach the stars by that time. But I will keep taking out profits as and when there's a bull market.

$1 is definitely a great exit point. It's so cheap right now and DCAing into it makes a lot of sense.

Thanks man.
I'm sure that you are stacking hard as well and probably a lot higher than this.

We won't feel it until the airdrop is over and hopefully the prices start to creep the other way for a while.

I think when LAND comes out it will pumpity-pump - I would like a bit more!

Thats sweet Niall, im trying to get to that number too, might take me couple more months. I feel you on the rounding part. I don't stake unless i have whole numbers at least lol.

I know. I can't stand having 1003 staked. It would just keep bugging me every day. :D

Hopefully you can get there now. It's a big target but achievable and i think it will pay off nicely in the long run.

Oh, I forgot to congratulate you for this important milestone. Well done, mate!