A burning proposal for dCity

I have a proposal for this little game:

But before I divulge the details, let me summarize the gist of my proposal through a GloryHammer song:

As for the details, let me first summarize the problem I'm seeing (from my perspective), and that this proposal could solve.

Now in dCity you can burn cards actually. Did you know that the burn rewards are as follows? 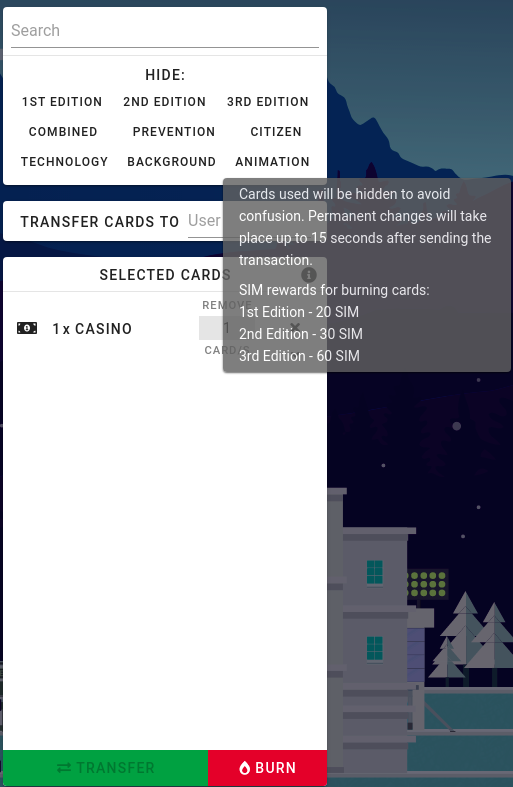 Now my proposal is to change the burning mechanism rates for a duration of 30 days, such that they are paid out of the reward pool in SWAP.Hive, rather than SIM. This will reduce the downward pressure on SIM, and likely incentivize people to exit more quickly by burning cards.

Currently, we have 1.6 million minted cards. And the reward pool is 134k HIVE.

Now my proposition would be to reward the burning of cards as follows:

If everyone would burn all the dCity cards, then the reward pool would be approximately halved and the last player owning a dCity card would get an enormous Hive bonus if he/she were to keep it.

By enacting this, old unkeen players have a rapid exist strategy, and the transition to the new playerbase will be much quicker. In addition, the burning of cards will help to permanently lower the SIM production, which further helps propping up the price and restoring the peg.

Lastly, the reason why I think this should be temporary for 30 days, and not permanent, is because we are in a transition period in DCity. It's therefore, in my opinion, only appropriate to enact a temporary measaure and not a permanent one! But frankly, doing this as a permanent measure might not be too dangerous either.

Let me know what you think!

The proposal looks really interesting and it will be effective.

If you think all dCity cards are approximately same value, you might need to play a bit more.

I don't think they are all the same value, but I do think they should have the same burn value.

The reason for that is that different cards can fluctuate a lot in value over time, as new and different combined buildings become possible :).

@jelly13! I sent you a slice of $PIZZA on behalf of @eythorphoto.

aaand then some !PIZZA no woeeirs , its on me!

@notaboutme! I sent you a slice of $PIZZA on behalf of @eythorphoto.

Congratulations @notaboutme! You have completed the following achievement on the Hive blockchain and have been rewarded with new badge(s) :