DEC price explodes, SPS airdrop is an overwhelming success and SPT trades for more than DEC these days. It's madness I say! ;)

As for DEC itself, this is what the chart looked like in the past season.... basically it went x5! 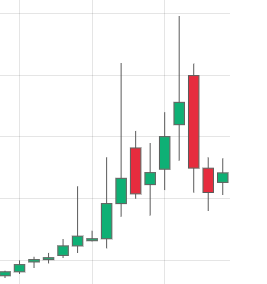 Now, let's have a look on how I coped with all this madness in the last two weeks...

#43 is a solid ranking! I actually was slightly higher just before the deadline, but thought I'd try my luck with one game to see if I could breach the 4700 barrier. I lost that match, but still was safely in the Top 50. And beating jacekw is always a nice cherry on top! :D

I clearly had struggles with Malric Inferno...and I didn't even realize that I did! Brighton and Byzantine Kitty have worked out extremely well though, so now complaints from my side. I also managed to get things right again with Owster and Yodin this time around, so I'm happy with this chart.

All the classics are at the top, but the Chain Golem is surprisingly prominent in the list. I played him more this time around with mixed success, and perhaps should try to instead play more with non-neutral tanks (which are usually a bit stronger as a whole). I'm probably also the only one on the planet with a negative win rate with Ruler of the Seas.... without Alric or Valnemor (I almost typed Voldermort :P) it's just harder to play him I suppose.

Further down the list is a small gem btw: the Swamp Thing. That one has been a huge winner in low mana battles against Mylor Crowling decks in particular! Unfortunately, the max level card probably costs 5 horses and 20 goats to purchase these days though, but perhaps Chaos Legion might bring a worty successor for that one? ;)

I seem to perform similarly good with all rulesets these days, except for Heavy Hitters. Perhaps I should take more advantage of Stun and align my knockouters with the actual monster that I've been stunning, instead of freely mixing sneak, snipe, opportunity and such ;).

With a whopping 3 Top 10 rankings and a Top 5 ranking I can't help but think that perhaps a few too many players where more focused on their SPS stacks than the actual game... ;). But that being said I bombed a Wealthy Gambit by finishing 30th (I was lucky to win anything there) and I also ended outside of the prizes for several smaller tournaments due to a few Hive bugs.

But after switching my Hive node to roelandp.net it all worked more smoothly for me at least, and I believe that those network issues are now all resolved! Overall it was a long season with many tournaments, and a pretty impressive DEC haul!

Two legendaries and a Golden common, so I'm pretty pleased there. Actually, with these insane prices even just winning a few commons and rares feels like an epic victory!

I've let a few cards, and got a bit of DEC. I like the system a lot, so I'll try to let a few more cards this season to see if I can increase the income slightly.

The price explosion was sudden and at least caught me very much by surprise. But for me it has been a reason to slim down my card assets a little bit, and prepare a little bit for when Chaos Legion gets released.

In general, some of the DEC, SPS etc. ended up in a range of liquidity pools at https://cubdefi.com (which is quietly becoming superior to its competitors) while some of it also ended up in https://dcity.io cards and a few new miners here and there (e.g. the @liotes LENM ones and a bit of @archon-gov ARCHONM). I think it's only healthy to diversify a little bit in these high times, and at the same time I am also very happy for the Splinterlands team and all the players that the game has finally been hitting the spotlight!

I wish you all well in the coming season, and don't forget: whenever your combat meter is at 100% you'll be losing out on precious gaming DEC, so keep those battles going! ;)

Posted using SplinterStats Season Report Card.
This once a season tool for Splinterlands players provides a template to reflect on and share their performance, card usage statistics and rewards summary for the season. More features will be released in the future.
Follow @splinterstats and come visit us in Discord if you have any questions.file:///home/csstddg/Pictures/Screenshot%20from%202021-07-31%2020-18-56.png

Hello. Testing the new SPS Airdrop table. This should show all amounts claimed by your account, regardless of where your assets where are held. The Staking Rewards should begin showing in Season 55's report.

Thanks for using the SplinterStats Season Report Card 👍

Ah, well done on that one!! I think this will become particularly interesting once SPS is awarded in battles and tournaments :).