If you are new to the HIVE blockchain you might be wondering what POLYCUB is or you might also be wondering what LEOFINACE is. Lets start with LeoFinance. The HIVE network has something that is known as TRIBES. These Tribes are communities that have their own frontend. LeoFinance is one of those TRIBES. We won't go into too much details on how to create a TRIBE but we will note that there is a start up cost. For more details on how to create a TRIBE please visit HIVE-ENGINE. LEOFINANCE is arguably the frontrunner of all tribes (the one that has had the most success and lasting power). 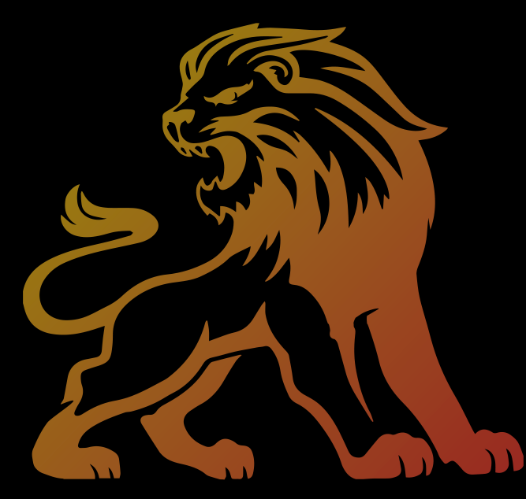 LeoFinance is no stranger to bringing value to the HIVE ecosystem. Their Tribe and team have created many useful apps that are used daily by the HIVE community. Some examples of such apps are LeoDex, Hive Stats and LeoPedia. Their creations do not stop at apps, the LeoFinance team have also created many currencies. The main one being the Tribes native token LEO, some others being CUB/bLEO and wLEO. The LeoFinance team recently announced an airdrop for a currency named PolyCUB.

LEO as a holding company is something we've discussed many times in the past. It's the umbrella that owns everything. All value is captured back to LEO in the long-run.

CUB is our DeFi extension. It's enabled us to build deep liquidity on the Binance Smart Chain for bLEO which will become increasingly important as we turn our focus to hardening LeoBridge and extending it into the Multi-Chain future.

POLYCUB brings a whole new set of opportunities to our community. As we say continuously: the mission of LeoFinance is to expand the width and depth of our community 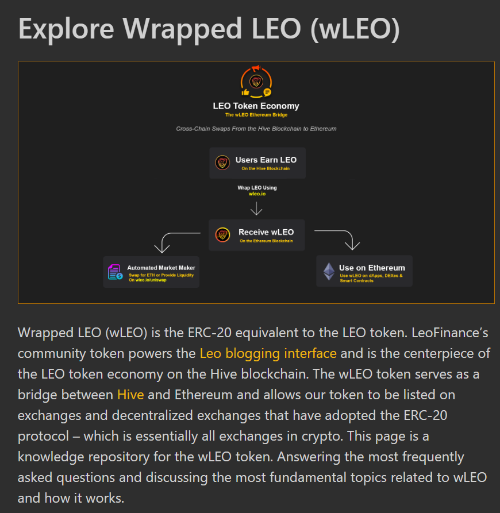 PolyCUB is a yield optimizer platform that provides a safe and easy way for DeFi users to discover yield and earn on the Polygon Network.

To read the original introduction post for PolyCUB and its airdrop informaiton click the following link: https://leofinance.io/@leofinance/introducing-polycub-or-preparing-for-launch-tokenomics-airdrop-details-and-partnerships

Polygon CUB is an entirely new platform with some familiarities. We've kept the UI very closely resembling CUB on BSC. This will make it a seamless experience for anyone who's familiar to jump right into the opportunities of Polygon.

LEO, CUB and POLYCUB go hand-in-hand. As we expand into the multi-chain future, the opportunities are going to rapidly & exponentially grow. Our mission statement is fulfilled through this multi-chain vision as we track our KPIs and look for growth on all fronts: new community members, monthly traffic to leofinance.io, value for LEO, CUB and POLYCUB, etc.

The rough figures are at least 0.15+ POLYCUB per 1 CUB staked with snapshots taken daily for the 60 day period. For example, if you have 1,000 CUB in the Kingdom you'll get ~150 POLYCUB airdropped daily over 60 days to your Polygon address (~2.5 POLYCUB per day). More Info Here.

As noted in the LeoFinance post Polycub Mechanics Spotlight Post For more details about the PolyCUB airdrop you will have to follow the @leofinance blog to keep up to date with their postings as they plan on releasing more PolyCUB airdrop details in their upcoming Spotlight posts. 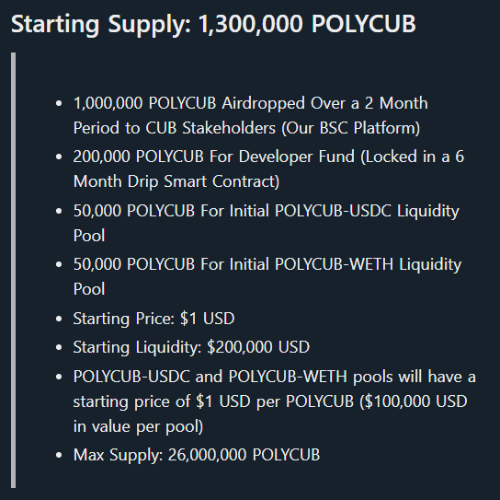 @readthisplease has a quick and easy to follow guide on how to purchase CUB from CubDefi. That turtorial can be found by Clicking Here.

How To Purchase CUB On Cubdfi? 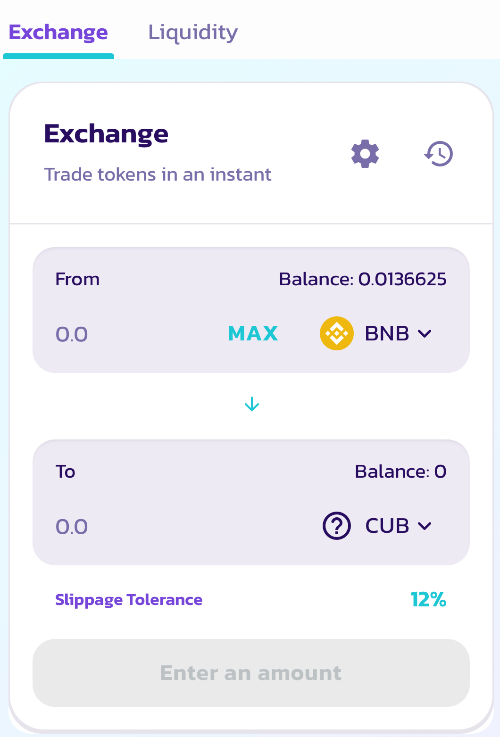 Its possible I have missed a post somewhere that has more PolyCUB airdrop details in it but as far as I can see the above is the latest up to date information. As noted in the quote by LeoFinance above All value is captured back to LEO in the long-run. So if you are interested in PolyCUB or anything else LeoFinance related you might also want to hold some LEO. The LEO token can be purchased on Leofinances very own DEX called LEODEX or on other HIVE native DEX's such as Hive-Engine and Tribaldex. Recent LEO Buy & Sell Orders can be seen below. 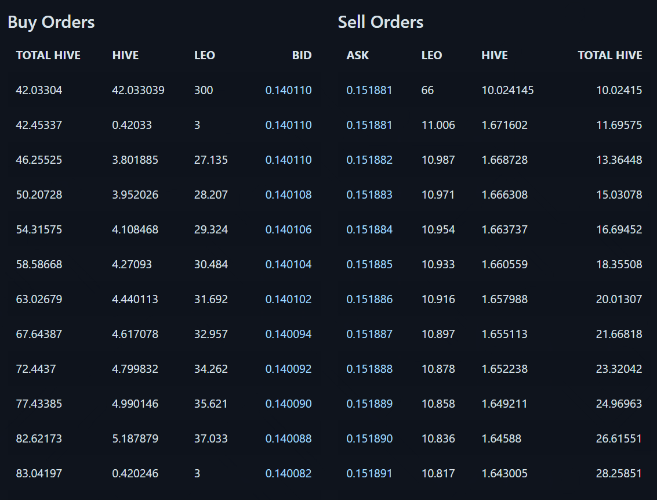 Thanks for your continued support in my posts.

lolztoken.com
How does a tiger find his favorite song on Apple Music?
He uses their algrrrythm
@emeka4, I sent you an $LOLZ on behalf of @rentmoney
Use the !LOL or !LOLZ command to share a joke and an $LOLZ. (3/4)
0
0
0.000
Reply

Hey @emeka4, here is a little bit of BEER from @rentmoney for you. Enjoy it!

I think it is a wise move for leo fiance to expand to polygon. But I was disappointed that Leo owners got nothing from the downfall.

I too am surprised that the LeoFinance main token LEO isn't included in the airdrop.

Yes, maybe because now it's too far away from this blockchain so they prefer to make it about the closest token, CUB 🤔

im little confuzed,
if i have swap.cub tokens in hive-engine can i get airdrop or no?

I'm not sure how the LeoFinance team is going to handle that. The intro post says Staked CUB and I don't think swap.cub can be staked. You would need to ask someone from the Leofinance team for a more accurate answer.

I think you have right, on token say "polygon network", so i belive need to have CUB tokens in binance chain wallet (metamask wallet configured on polygon network)... I dont like metamask and in mozzila if try to install plugin they say metamask is not secure you install on self risk...

I don't use it on mozilla, but I have metamask configured with a hardware wallet which reduces and risk significantly.

The only question about this is

The when hasn't been announced yet. From my understanding more details about the airdrop will be released in a LeoFinance Spotlight post.

Khal really should have kept quiet about timelines - and should do so in the future, it was definitely mooted as supposed to be starting two months ago or something.

I think it would be wise to wait out the current airdrops. Investors might be spread out too thin with stacking for the existing airdrops that are just around the corner.

Oh I am patiently waiting for many airdrops!

Oh I see what you mean. If that happens I'm just gonna dump all my Cub.

I am still waiting for the airdrop to happen. It's been a while since it has been announced and I am a bit sad that things keep getting delayed. However I have been building up my CUB positions over the past few months so I should get more PolyCUB.

With the amount of airdrops that are coming up I think its wise to wait them out and then have the CUB drop or any other potential airdrop for that matter. Don't want to spread potential investors too thin.

That's true, I feel like I'm hearing about this airdrop since months now !

I have my $CUB, now we just need to get excited about it.

I didn't know the airdrop was that big !!
Let see how everything will go that's really interesting ! !PIZZA

Yeah, the whole community is excited about the airdrop. I am farming as much cubs as I can before the snapshot.

Then add the airdrops.. it's an expanding trickle of income. I get a kick out of those who are frustrated they aren't rich yet, they tend to ignore the most important part of wealth,.. reoccurring income.

Just keep adding to the principle and be patient.

Patience is the key to allot of things. Making "money" work for you instead of working for "money" is always a great move :)

Yes, I am patiently waiting and compounding my CUB in the meantime :)

We have been waiting for this polycub airdrop. Let them drop it,we can't wait to welcome the new polycub.