Fails of the Urban Explorer: Mansions!

Who doesn't like exploring a mansion? They look great, are imposing, have many places where you can sneak in, can be in the middle of nowhere, and the isolated ones are generally Karen-free, whats not to like? They can also be tedious, samey, and bare inside. For me, they are somewhere in the middle. They tend to be large, one can get lost inside and they take some exploring.

This 17th-century great hall is located in a strange position close to a new housing estate. Nevertheless, we struggled to park, almost fucking up my car by placing two wheels on a grass verge. Some 'famous' GoonTubers had been recently and so we expected the worst. Rounding the bend we saw new boards right away and groaned. @anidiotexplores knew of the old access point which was now in the same state as everything else; sealed. Llanbedr Hall makes for a great cover shot, the insides are completely fucked, don’t be fooled by the external appearance. There’s a dilapidated camper van, also abandoned next to it. Closing the gap would certainly attract attention and so we kept our distance. Some fencing had been erected and you can see how close this decaying mansion is to the nearby resident hoard of Karens just waiting to start gobbing obscenities at us innocent explorers. I doubt we will be going back; it’s a long way from home.

Doesn’t it look creepy from this angle? Unless some crackheads had recently smacked down a door (as well as their arm), there was little chance of gaining access to this one. It is situated in the centre of a public park. I confess I can’t remember where this one is as I was led there by @andiotexplores in one of our 'desperate times'. 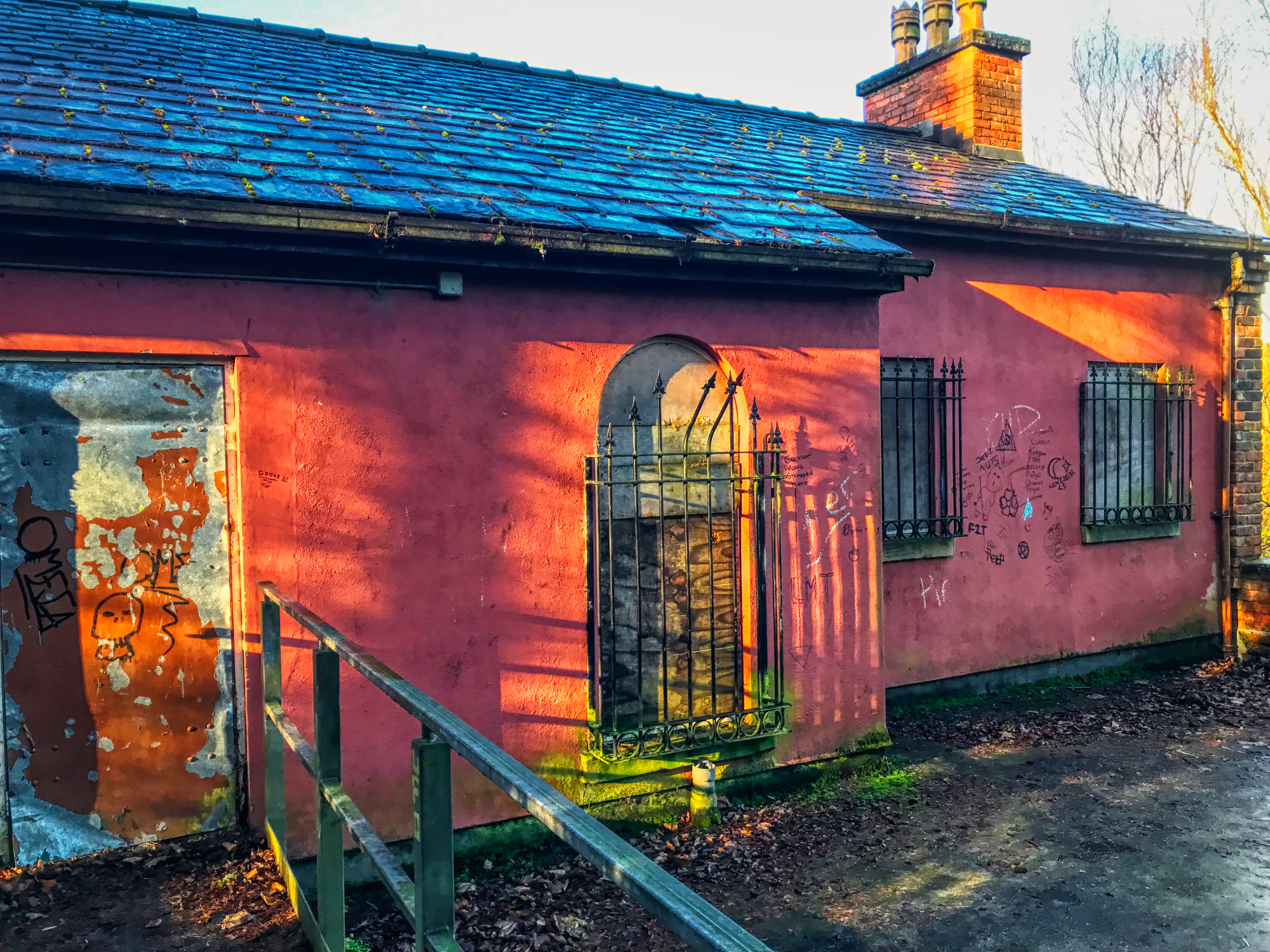 Sometimes it’s tough to find anywhere to explore, so repeated attempts are necessary. We snuck around the back to find little in the way of access. Barred windows with spiky tops do not help much. 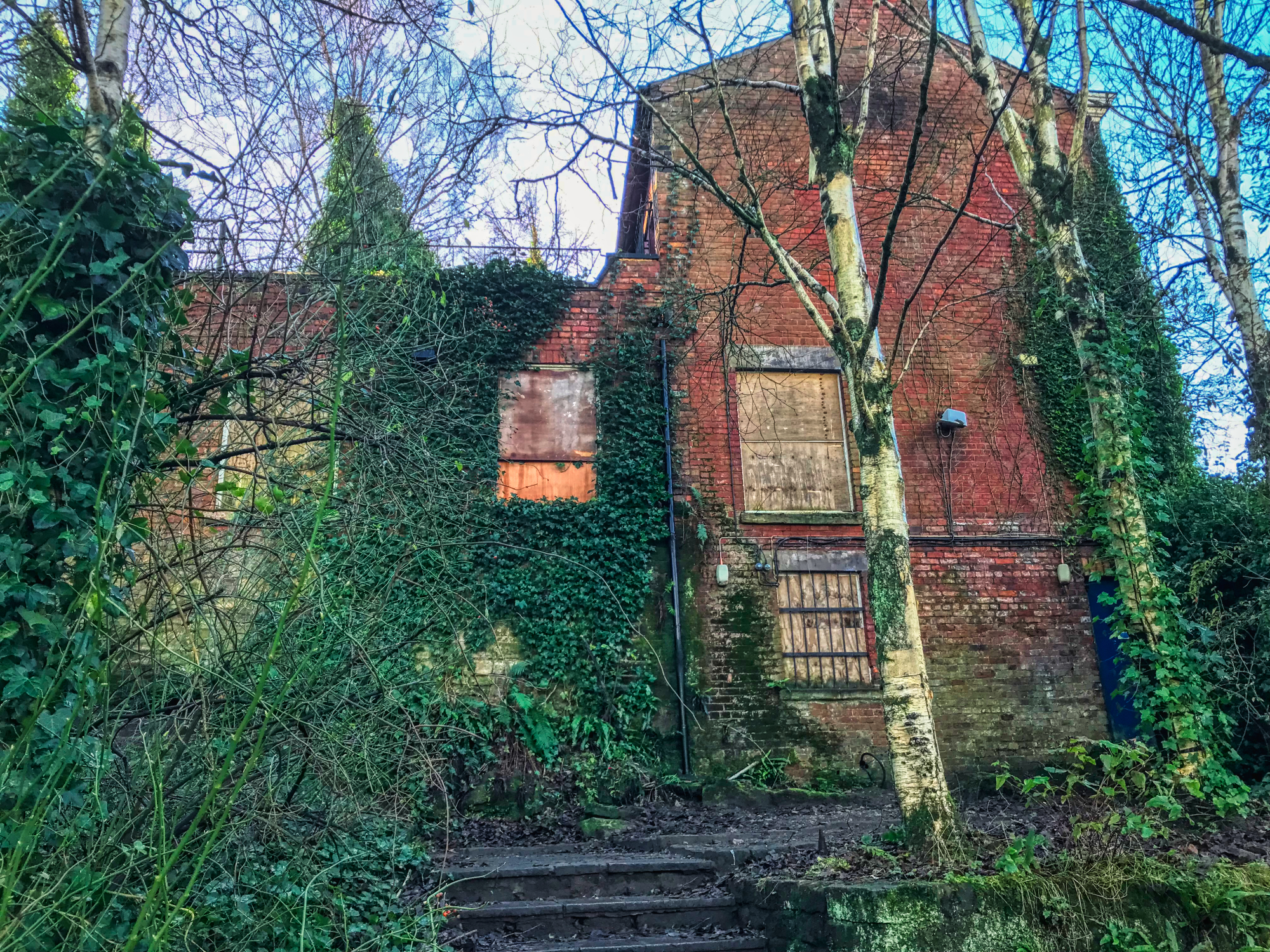 Apparently, the old way in was above the ivy where the newish board is now located. Without ladders that would be a tough call. With ladders, everyone would see what you are doing. It was not going to be.

The house is named so as Nazi propaganda has reportedly been found in the cellars. Of course, to get into the cellars one must approach from the house, which was sealed tight. We were tipped that Hitler's House would likely be sealed but tried anyway as we were in the area. 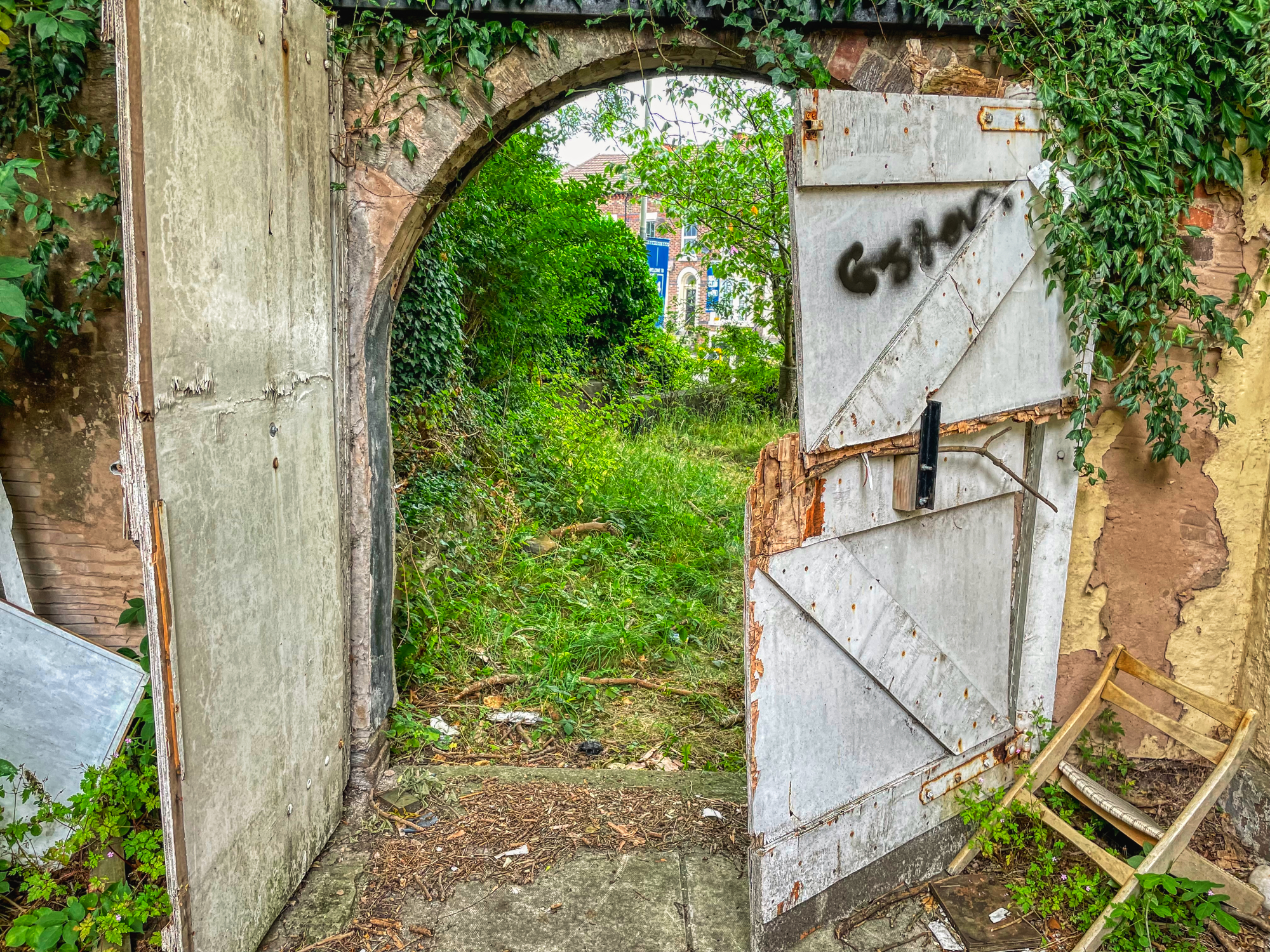 The front does look like a place that Adolf might have lived in, it has that ‘look’. The back was heavily vandalised and was complete with new metal seals. Beyond the house lay a garage teaming with equipment. If we wanted to break in, then there was enough junk in here to aid us in the business. 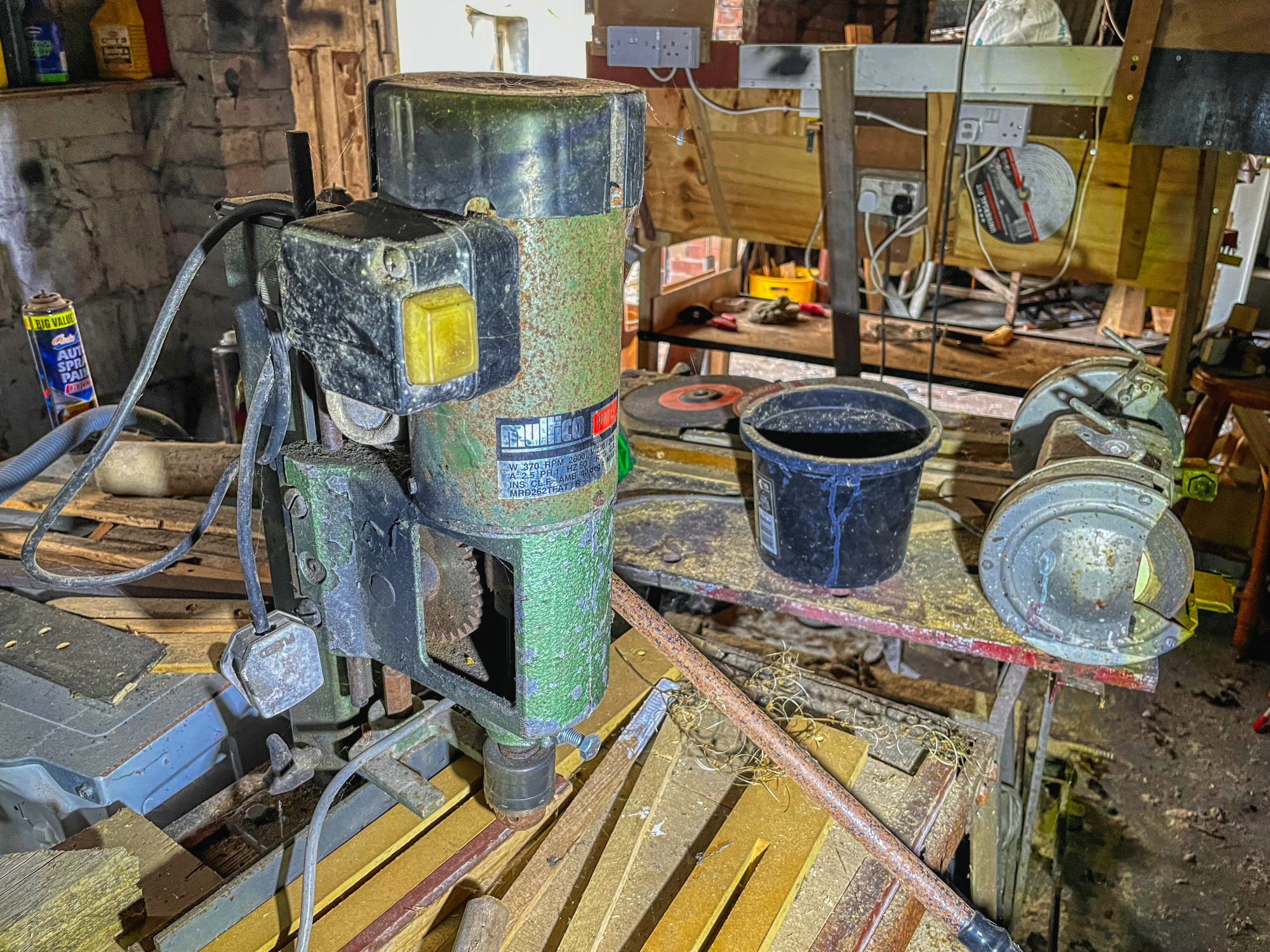 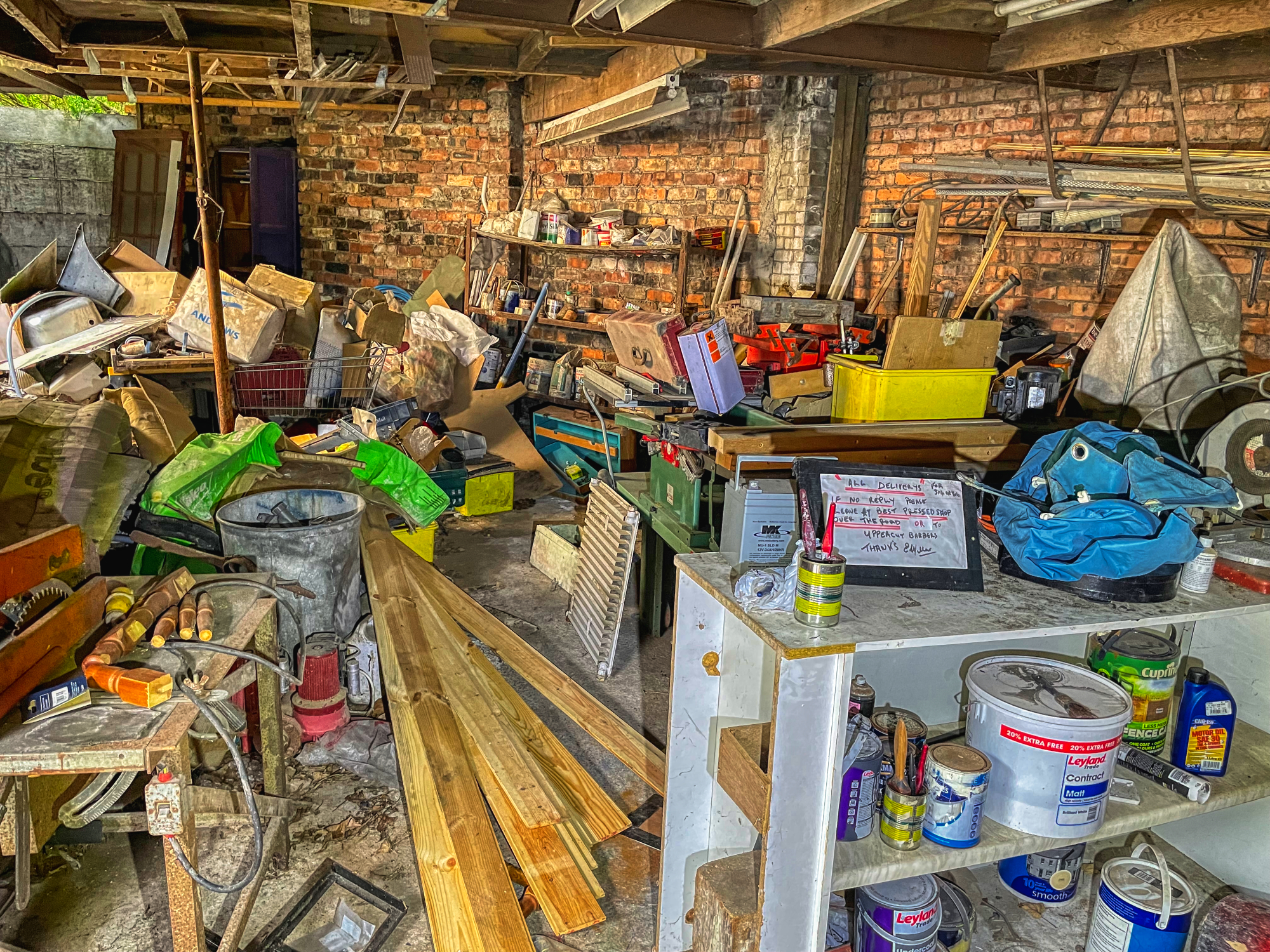 The sign says 'All Deliveries'. Hitler was running a side business besides trying to conquer the world. It was all quite rusty but likely still works. As we are not thieves we left quite disappointed at seeing no swastikas. Someone has already been having a go at the new seals.

Until recently Woolton Hall was open by appointment only. A caretaker ran it and invited explorers to have a look inside for FREE. Within the walls are countless prizes, portraits, and other valuables, or there once was. 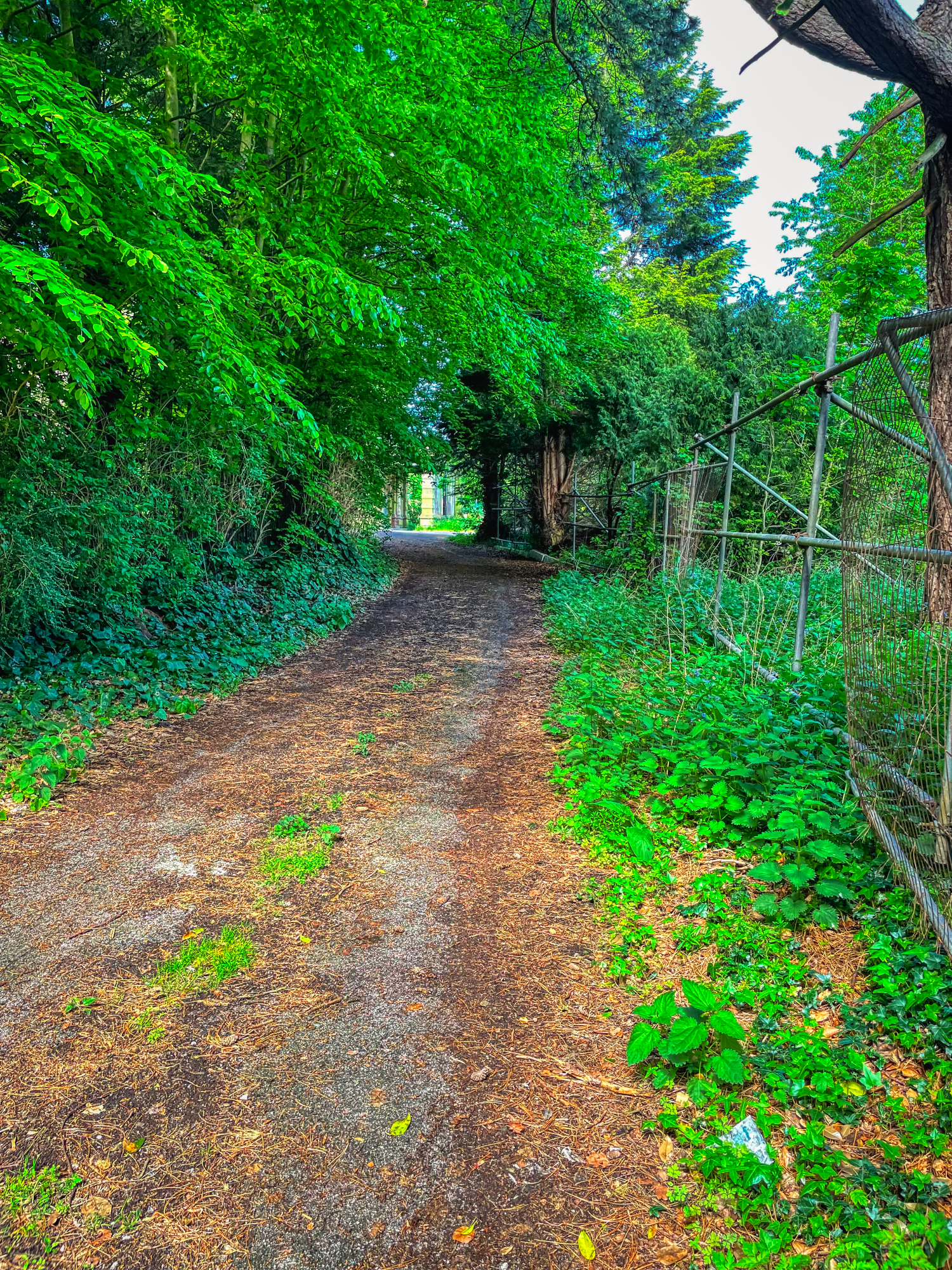 We could have taken up his offer, but guided tours are not my thing. Where’s the fun in that?

The story goes that Mr. Caretaker got greedy and started charging for the visits, at first with bottles of whisky and then monetary amounts that were growing larger with every visit. 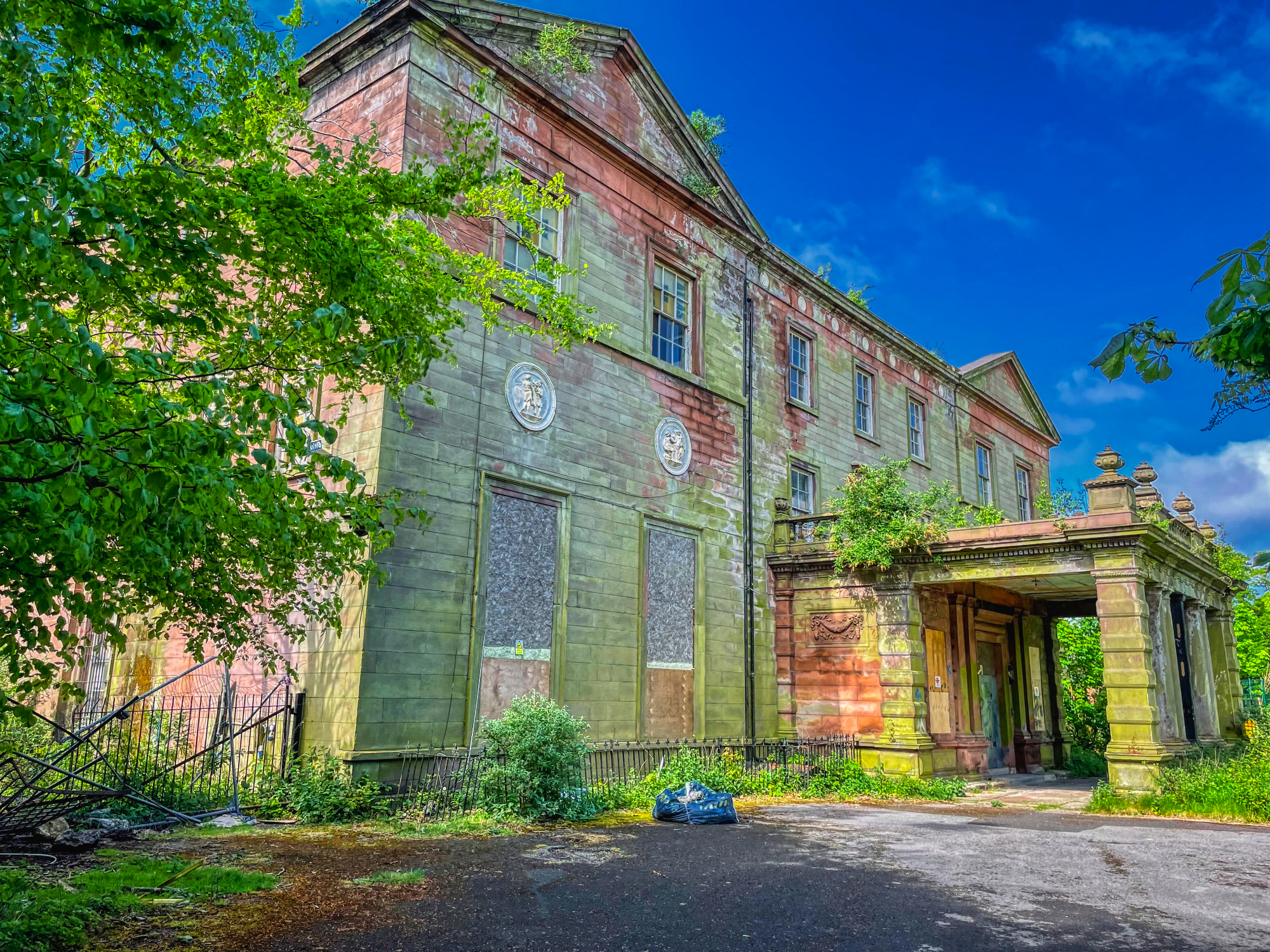 The owners got wind and sacked him. Since then, Woolton Hall has become abandoned and several explorers have walked the corridors. It was not our time that day, and after crawling under a very low gate we scoured the outsides to find makeshift boarding had been placed. This is one we will likely revisit. I hope the insides are not too vandalised by the time we get inside.

I see them all, could be the HIVE imaging server having one of its wobbles.

Same here but, i can see some of this photos and looks incredibles!

Yes the caretaker.., hope he got enough whisky bottles to drown his sorrows.

Sounds like it would never have been enough and he got busted before he got there.

But a fine effort it was!

I so much love the outward view of this mansion I must confess.

Again I love the wonderful shots you have taken.

The first and last mansions are beautiful - such lovely buildings. It must be a nightmare if you have a place like that and cant afford to do anything with it, but also dont want to see it getting ransacked and vandalised.

They are impressive beasts. You need to live there to keep the explorers away. I visited one that was still habited, broken windows and all. Had to make a quick getaway once the truth came out!

Lol - that must have been a shock on both sides !

You do get about.. always entertaining.. 😁
I was wondering, how you get those striking colours in your pictures..
The sky.. wow!
What's your secret? 🤔

I filter my images using Aurora HDR, it's commercial software and has a bulk conversion routine I use.

Excellent!
I'll check that out!
Thank you! 😀

Hitler's Hall cellar must have some history to extract, what could be in that cellar will definitely be worth exploring.

Woolton Hall, if there is any art and antique stuff leftover, this is something I must wait to see your next post about it.

Have a nice day bro.

Woolton Hall, if there is any art and antique stuff leftover, this is something I must wait to see your next post about it.

I have seen the internals from other posts, I hope it's not been wrecked. It's lovely in there.

The park mansion looks as if it is on fire with the sun braving in the side in that third pic.

Wouldn't fancy getting lost even for a minute or two on an explore!

The images came out strange on that one, very dark and yet it was a sunny winters day.

umbexers, day trippers and goon tubers. a curse upon their houses

I didn't realise Hell on Earth had done it recently, as they don't tend to tell where they are. On arriving the camper van gave it away. Slightly annoying.

hell on earth, nearly as childish as exploring with fighters !

What a shame you couldn't get inside, but you did get some really fantastic outdoor shots!

The first mansion was more like a mental hospital and the brick colour...very interesting as those coloured bricks are made from a type of clay I thought was only found over in East Yorkshire. Many railways buildings on the old LNER were constructed using that style and colour of brick.

OK, enough of being boring for one day but I would have loved to have got a look inside Woolton Hall. That's a gorgeous looking building.

The first one doesn't look like a 17th century building with that brickwork. I felt the same about Thornseat Lodge close to Sheffield, it looked too modern and yet that one was crumbling. Sandblasting works wonders I guess.

The first mansion was more like a mental hospital and the brick colour...very interesting as those coloured bricks are made from a type of clay I thought was only found over in East Yorkshire. Many railways buildings on the old LNER were constructed using that style and colour of brick.

OK, enough of being boring for one day but I would have loved to have got a look inside Woolton Hall. That's a gorgeous looking building.🍌

@charles37, are you deliberately trying to destroy your account, comment plagiarism will work fine if that is your goal.

Excellent post once again matey, just a quick one though, not all images seem to be working, not sure if it's the ecency app, but can't see them all sadly.

Hows it looking now? Quite annoying this post.., with the images only partially working.

All looks to be working fine now matey 👍🏼