Tales of the Urban Explorer: The Tin Tabernacle

“There’s a Tin Church down in Wales somewhere”

@anidiotexplores would not rest until the location had been discovered. Tin Churches are quite rare and derelict ones more so.

I previously visited St Hilda’s during 2019 in my early exploring days after I found some would-be explorer had sold out the story to the newspapers.

‘Lost in time, everything frozen’ it said with the usual over-dramatics they embellish on everything. That church had been tough to pin down in the same way as "The Tin Tabernacle" was now. 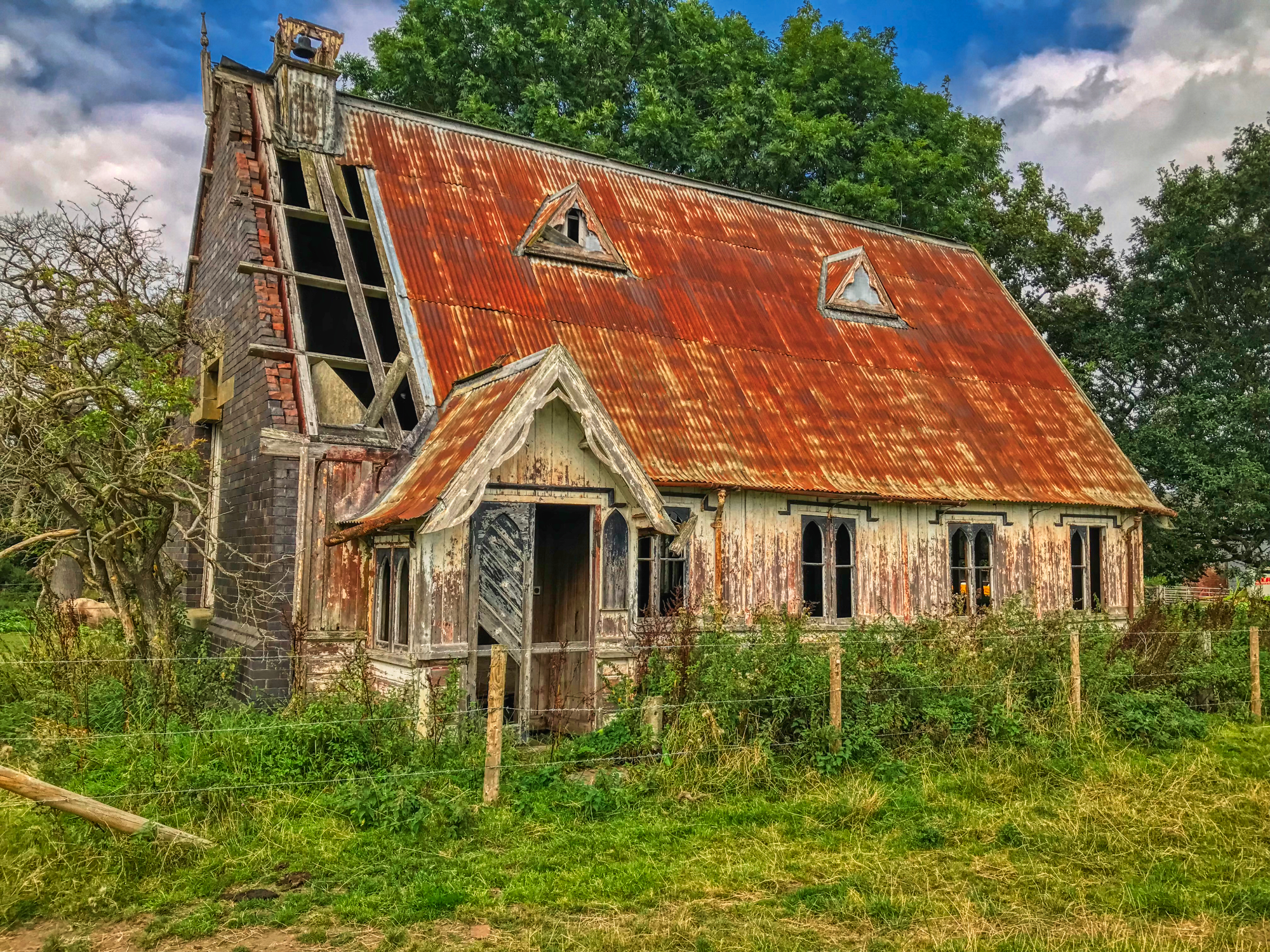 The area was easy to find, the spot not so. I contacted @grindle as it is close to his hometown and got a little more direction on it.

After pouring over maps for a while, I spotted it nestled in some trees, and a street view confirmed that the rusty roofed building was our target.

We would need to walk up the side road up to the farm and hope Farmer Giles was not ambling along in his tractor at the same time. I had discovered “The Tin Tabernacle” was on private land and that meant one thing. The ninja suits needed to be cleaned, dried and ready.

Giles would not see us coming, and there would be no angry farmer running down the road with his 12-bore shotgun with pellets hitting our arses.

Half the problem with these rural explores is where to dump the car. As I recall I mounted two wheels on a kerb, with just enough room for other vehicles to pass, cars that is.

One of these days, the car will sink into a ditch and I will need to call out the emergency services. I can see it coming. Creeping up the roadside, we figured to jump the left fence and sneak up adjacent to the road which would give us a little tree cover if the local bumkins emerged.

Hurriedly half-running to the large building right of the “The Tin Tabernacle”, we saw the trees would mask our approach. 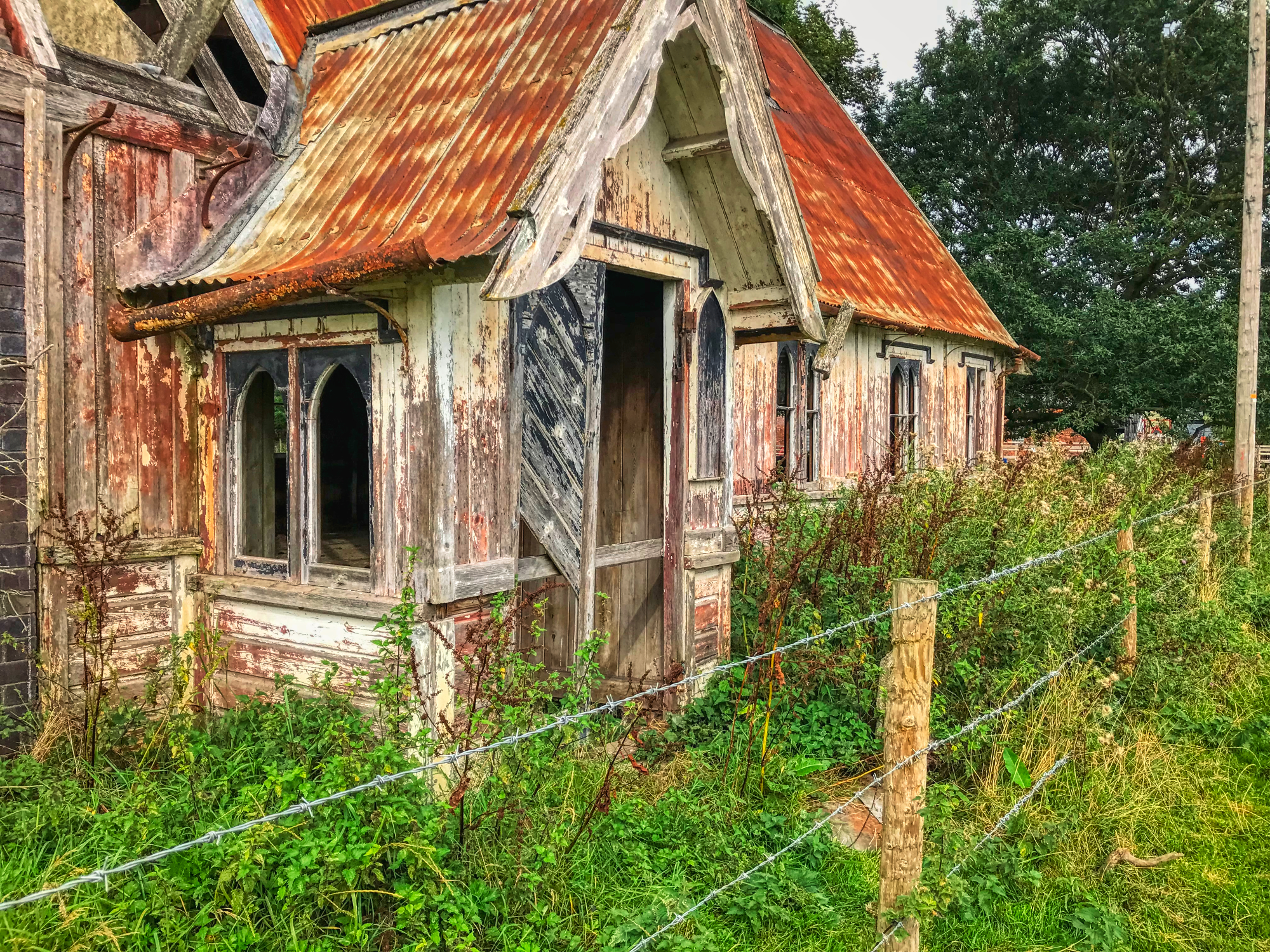 All was going well as both of us gingerly climbed over the very fresh barbed wire and entered the old church.

…’looking at that wire, the local landowner does not appreciate or welcome visitors’…

No attempt had been made to secure the door of “The Tin Tabernacle”, and it would be in vain. Most of the lower windows were gone and climbing through any one of them would have been second nature.

I struggled to find any individual history regarding this particular church, and can only mention most were built during the early 20th century.

This particular example was part-brick and exuded a real charm when approached. 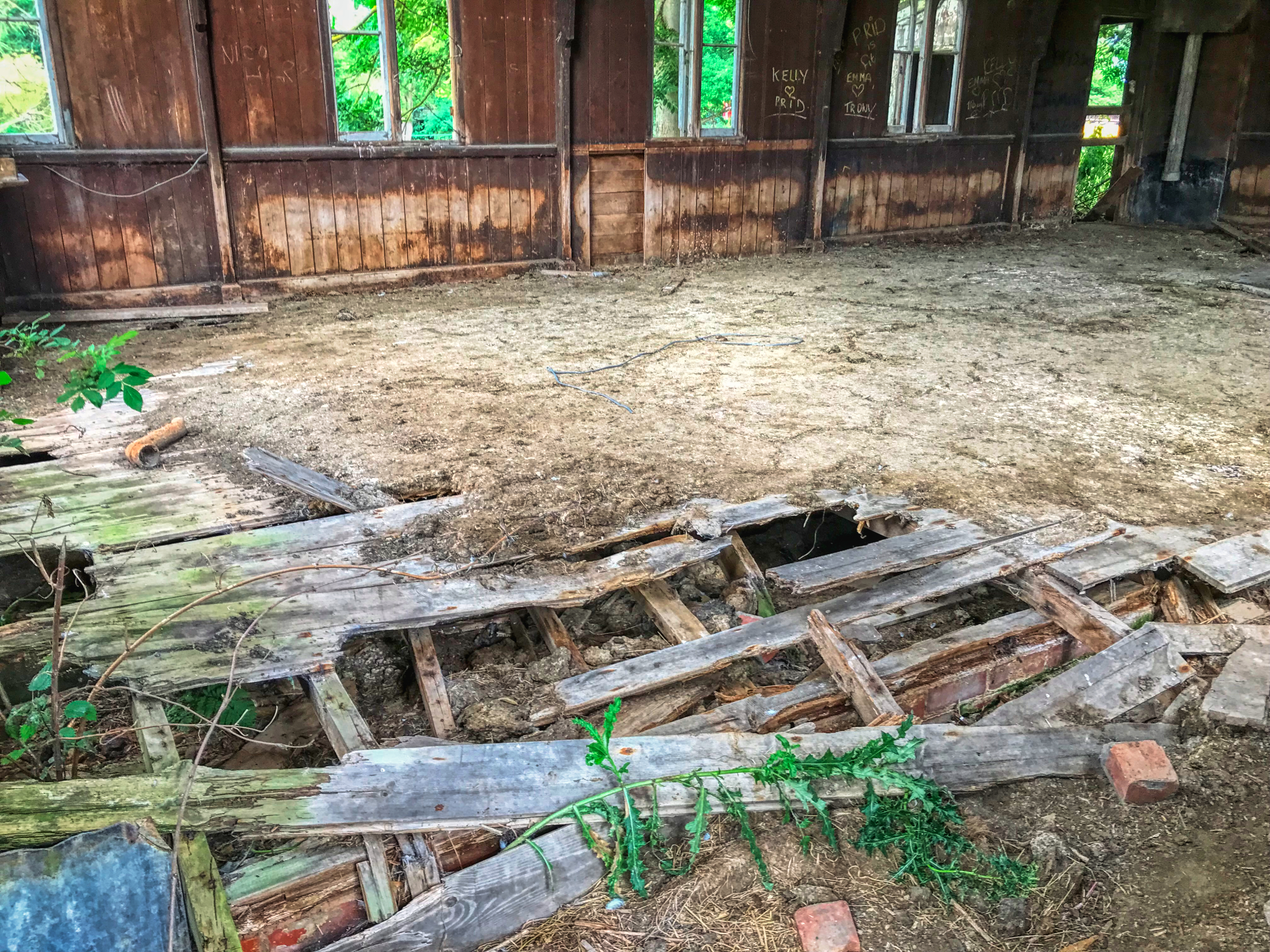 Avoiding the giant holes in the floor, we skipped over them onto what appeared quite a solid floor with just a hint of instability every now and then, 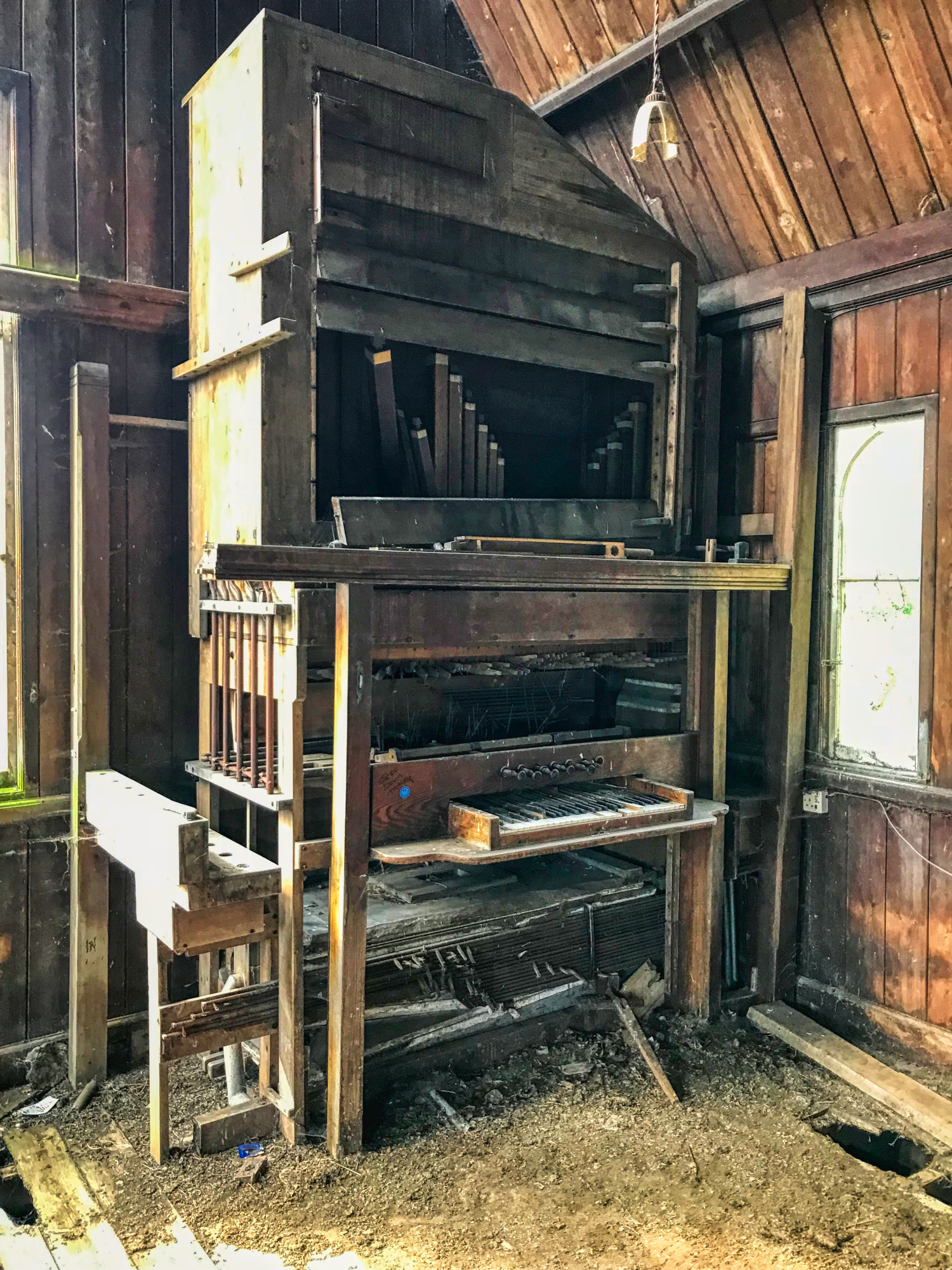 The remains of the old original organ was a huge bonus. A bad roof over that section and yet it remains intact. 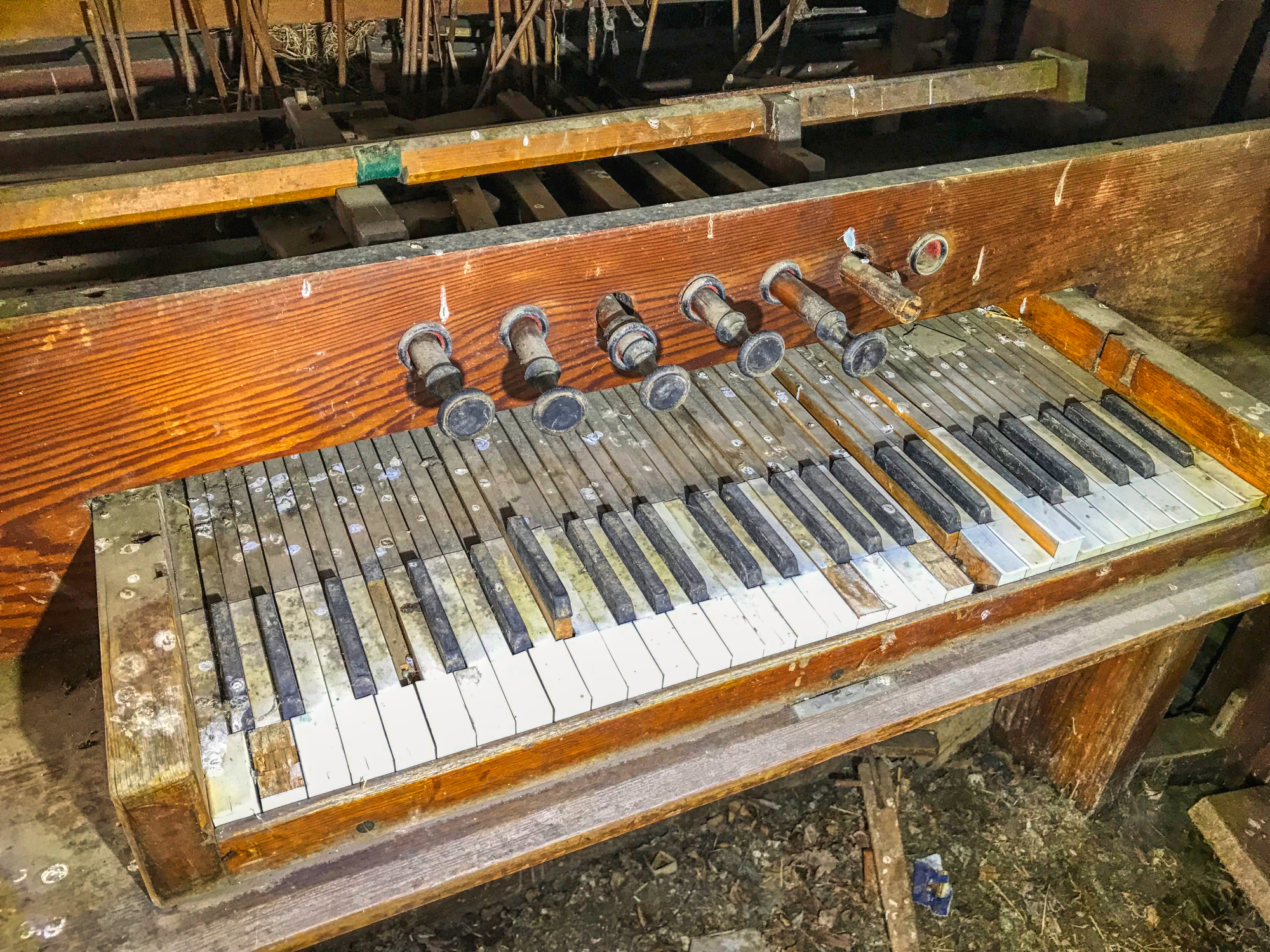 Getting a tune was going a little far, and I didn’t want to pull any of those buttons in case they disintegrated. Maybe it will last another decade, being where it is out of the way of most of the dickheads. 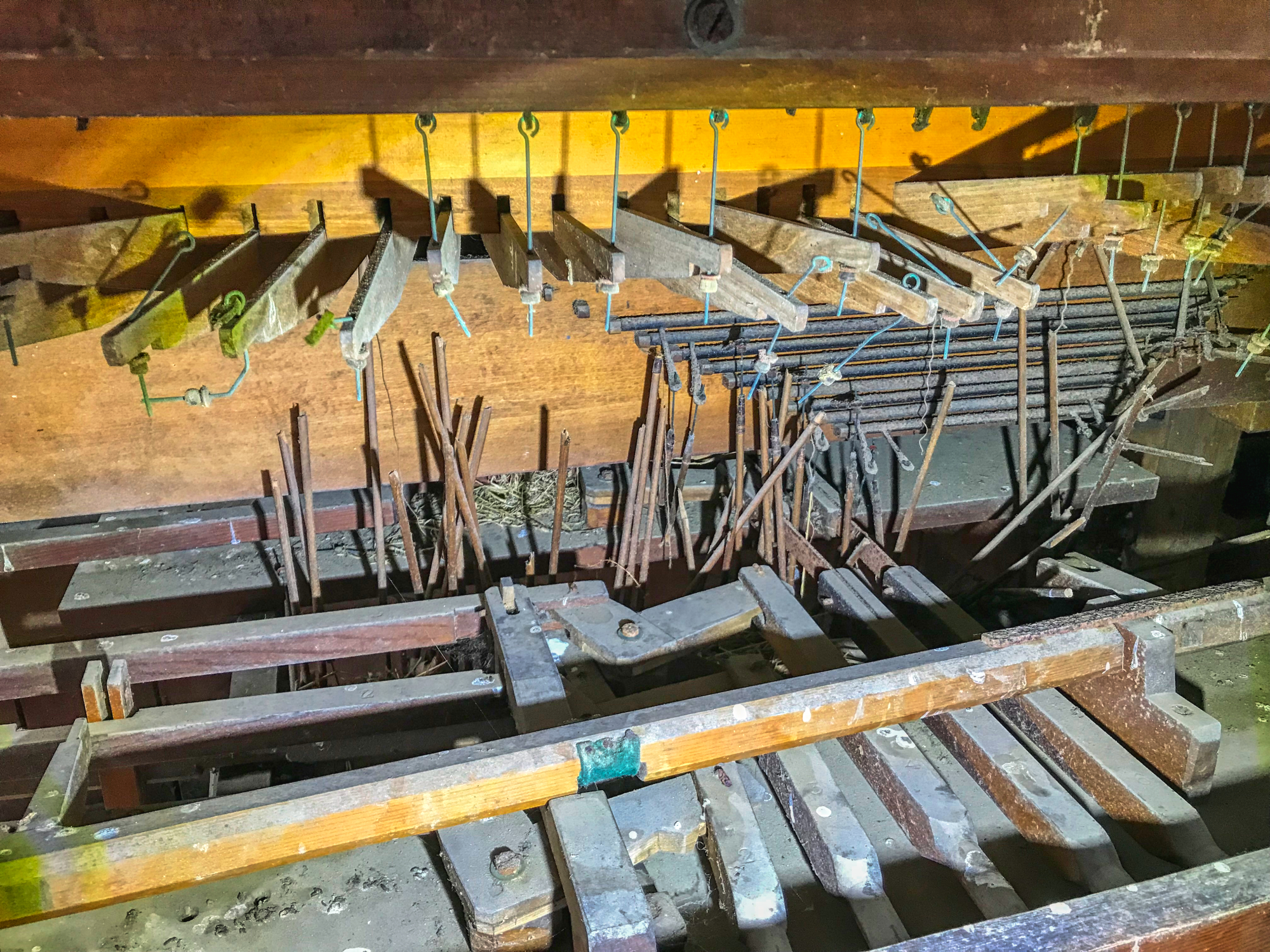 All handmade, I am sure of it, and crafted with skill. 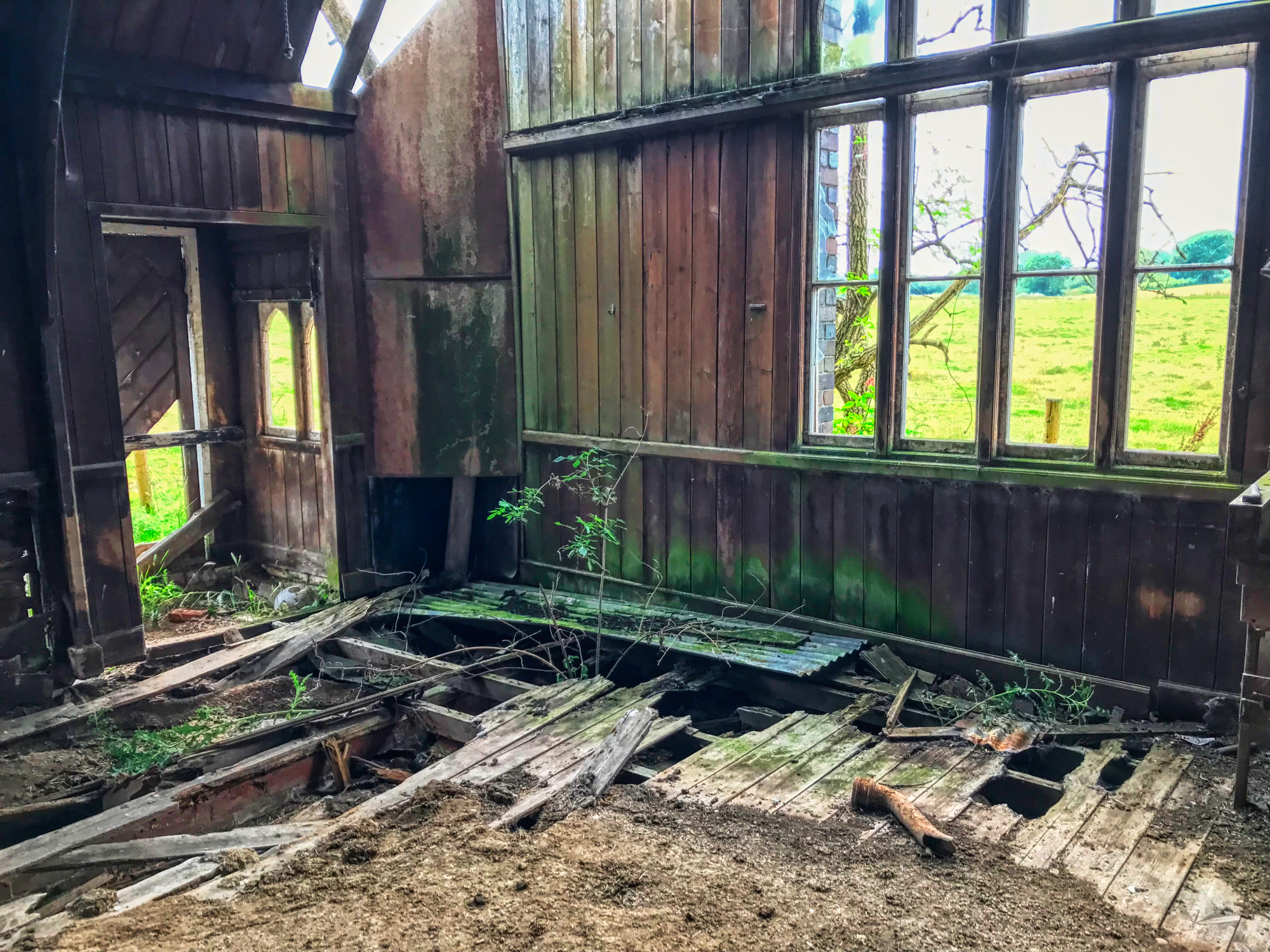 The entrance of “The Tin Tabernacle” could be great training for potential explorers. Twisting your ankle is always on the cards, breaking a leg, unlikely unless you are a clumsy bastard. 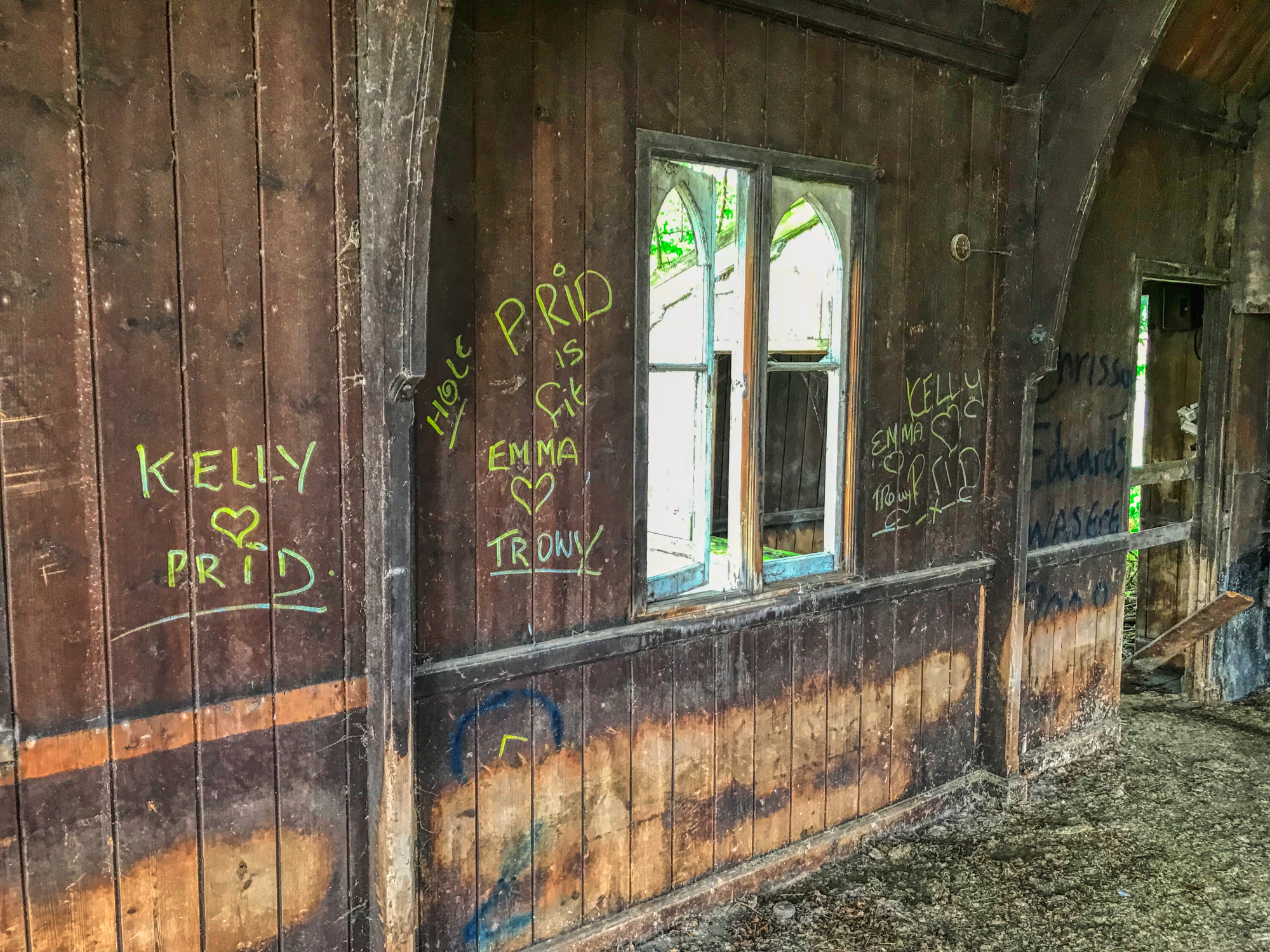 Yet “The Tin Tabernacle” has not escaped all forms of vandalism. I wonder if they contributed to the demise of the organ while at it? While the lower windows are alternate access points, the upper ones had mostly survived. This was very different from St Hilda’s in terms of architecture. 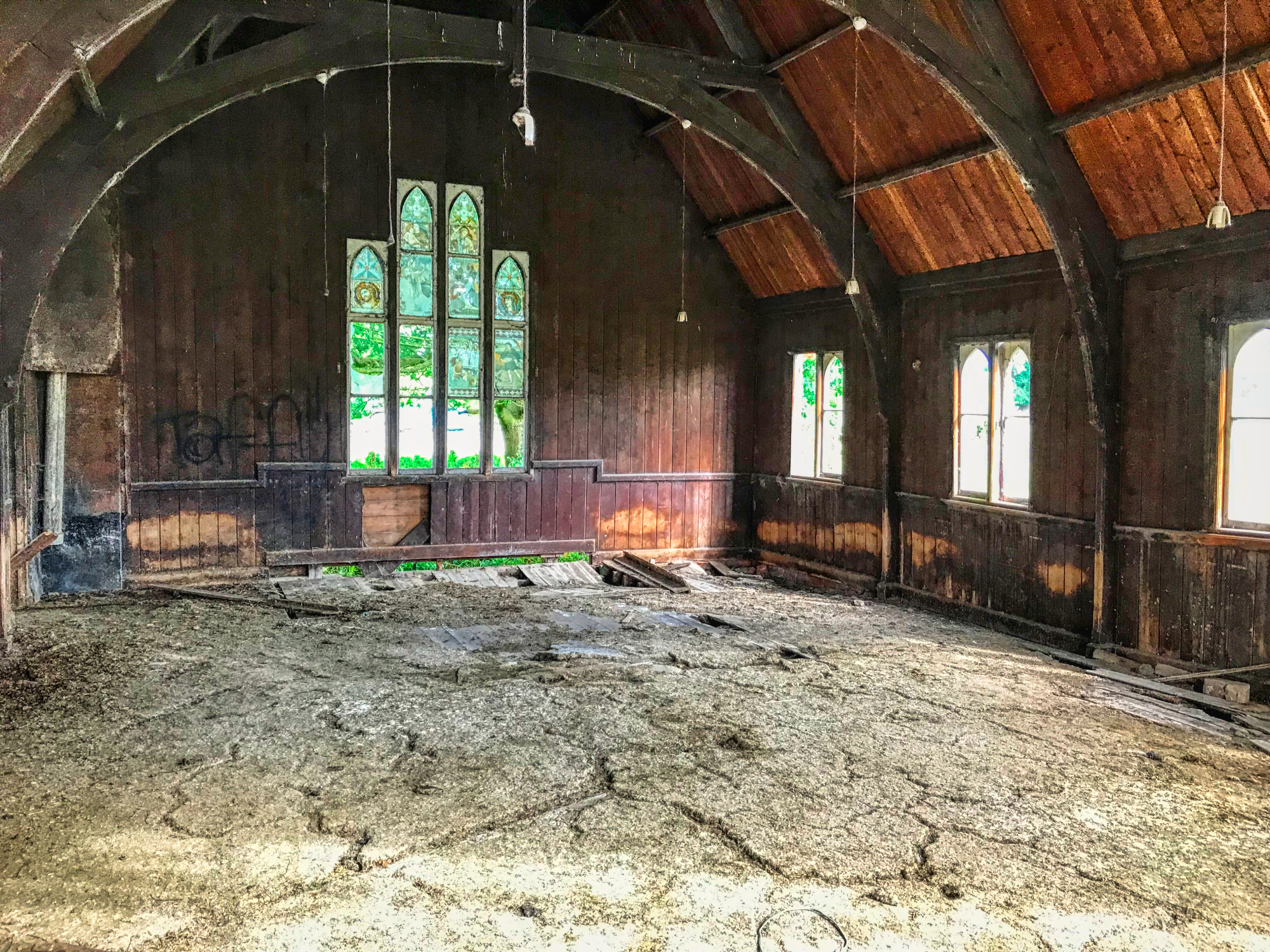 Little else remained within “The Tin Tabernacle”, yet both of us were curiously satisfied with what was left.

I have seen several images of “The Tin Tabernacle” from a decade ago and externally it appears unchanged. 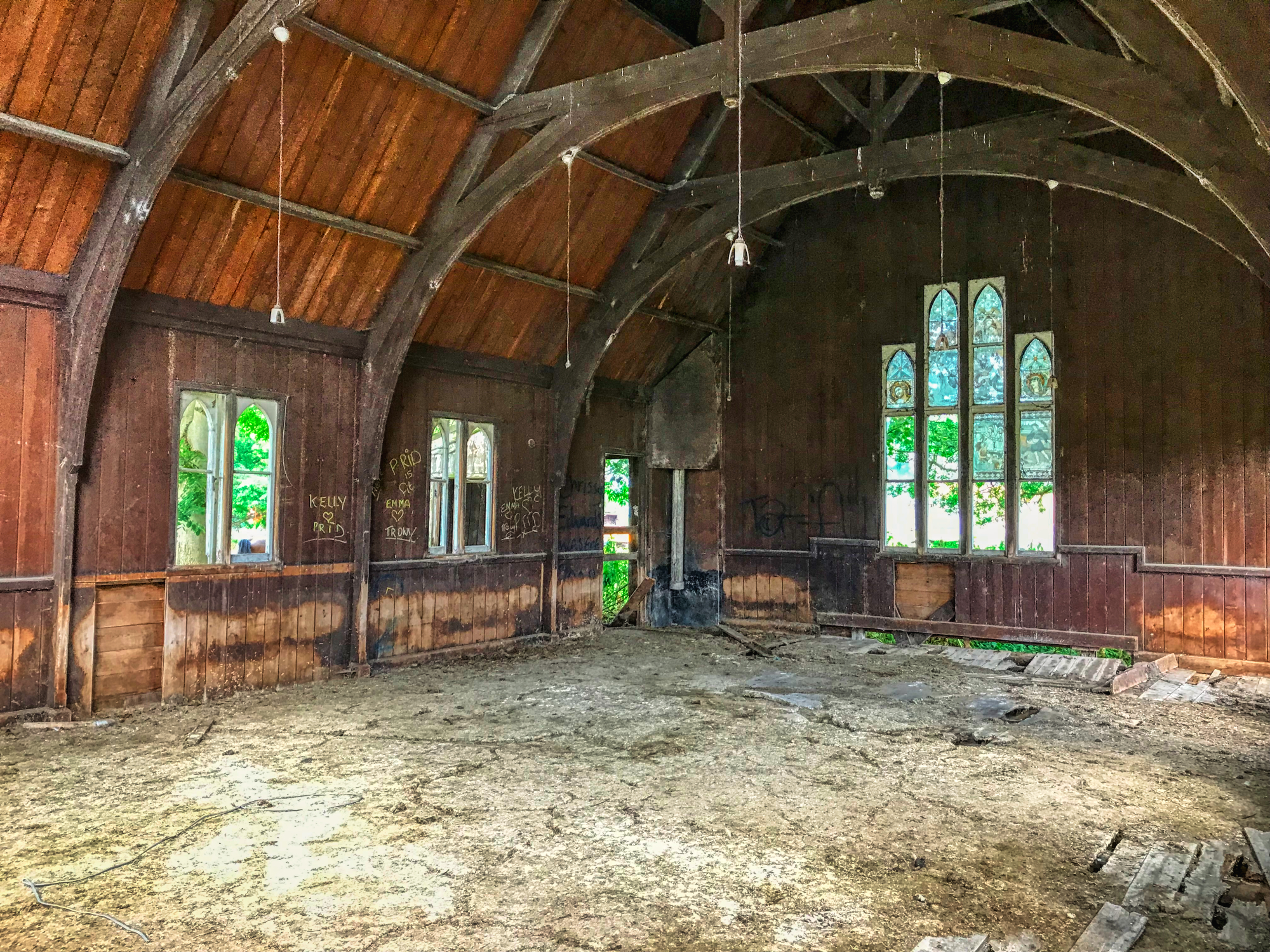 It makes me wonder what happens when Farmer Giles catches you in here. I get the feeling it is not a well-visited location. 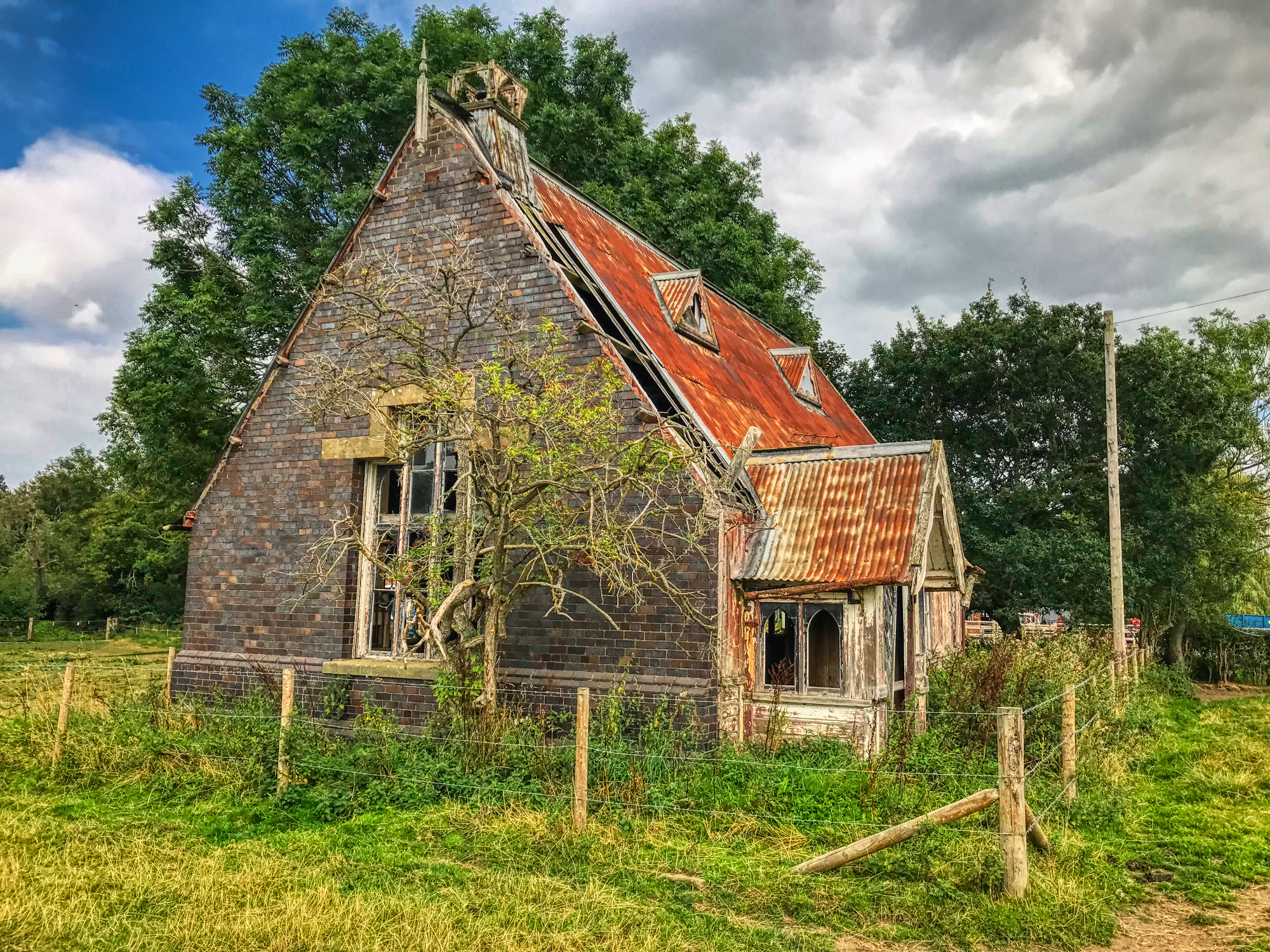 Without checking what was under the floorboards and thinking we may find murdered explorers who had been captured we exited for a few externals.

This was about as far around as I dare venture. For once this particular farmer did not appear to own any barking dogs, or they were deaf as posts. 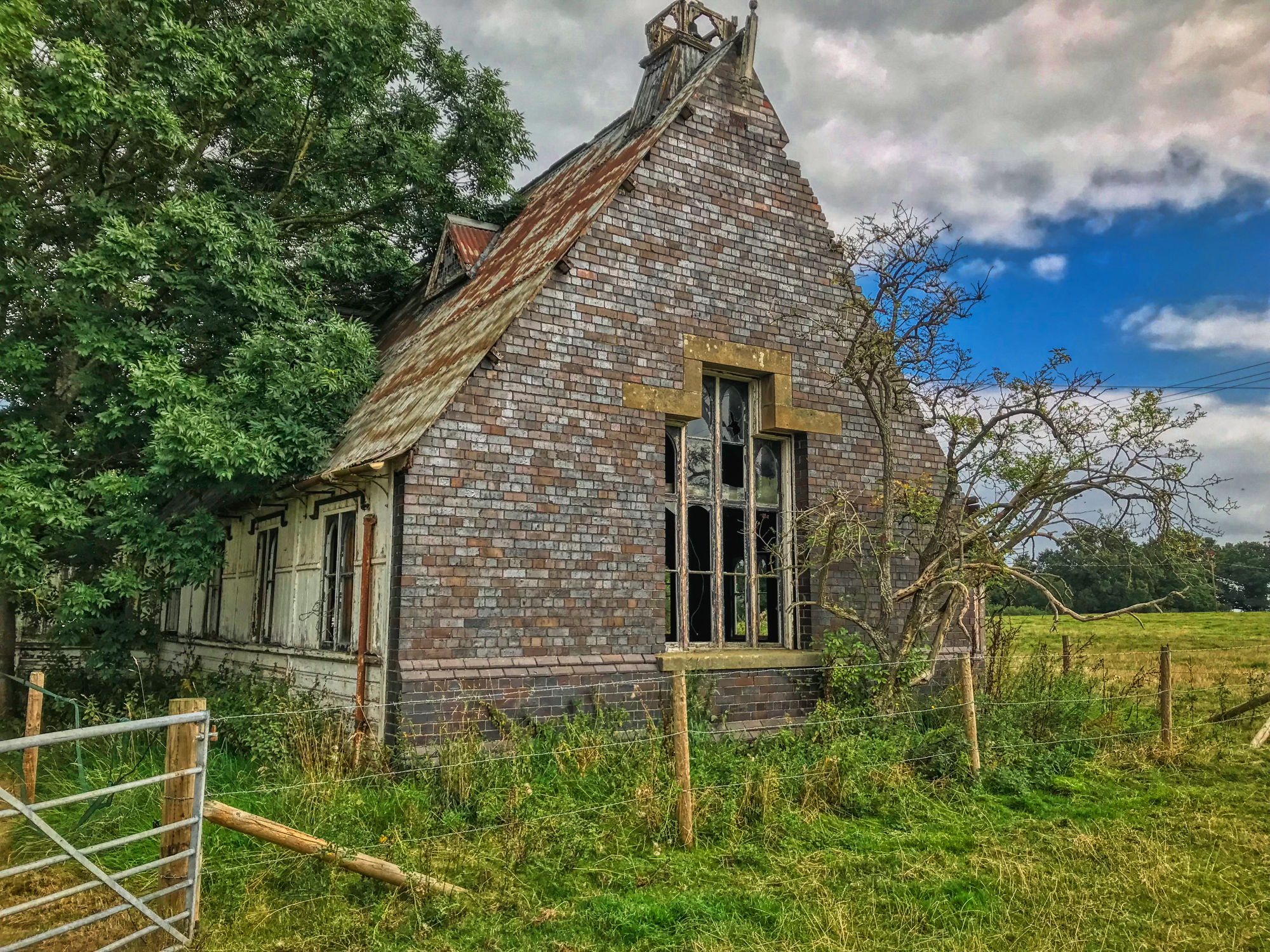 Quickly re-tracing our steps, we headed back down the field and back over the fence. Not a human in sight.

Wow - what a beautiful building. Such a pity it has gone into disrepair. Nice find !
!ALIVE
!PIZZA

A really great find. It would be a great place for light painting.

I knew a light painter once, not in the same league as the ones on HIVE.

What an excellent find, @slobberchops - and not a flooded basement in sight!

Yes, it does make a change to find somewhere relatively mud and slime free. I don't explore in the rain, there are great reasons not to.

That makes sense, lol! I try to avoid doing most things in the rain - frizzy hair's a bitch.

Since Tabernacle was a portable temple, it must be very old.

There are less than one hundred dotted around the UK. Another one I have my eye on is again in Wales. I need to track it down.

Murdered explorers? Hopefully that was a joke 😂?

Do you take anything I say serious? 😀

Excellent place you just showed us! The passage of time is something that doesn't wait for anyone, it would be incredible to see it in its golden years, jajaja. Greatings!

Thanks for sharing a place with us that others might never get the chance to see. Beautiful stained glass. Hopefully no more fools decide to rock the rest of them.

It was quite untouched besides that, though little was left.

which would give us a little tree cover if the local bumkins emerged.

Excuse me! we `are not Bumkins in this part of the world!!!!!

Bloody farmers are all bumkins, wherever they arise! Have you ever thought of publishing a book of your" inside old houses" adventures? A tin tabernacle could be a great title.

I love such isolated houses surrounded by green nature away from noise, you can practice sports with all comfort, drawing paintings, there is also a piano
It is suitable for performing theater scenes and cultural exhibition, as the place is very spacious

Practising sports in there would likely render you broken limbs!

I mean practicing exercise next to the house in green garden

I have never even heard of such a thing as a tin church!

The other one I mentioned.., St Hilda's was pure tin and when inside you could see it was not straight anymore, creaking and about to collapse. One blow from a large roaming hill giant and it would collapse. This was a little more sturdy due to the bricks.

They have since sealed St Hilda's. Word was the locals banded together and coughed up as they were pissed off with constant explorers.. We are a bad lot!

Imagine banding together and actually chipping in money because some people come and view and old building. Some people really are busybodies! Nuts. I would set up a stall outside and sell them lemonade :OD

I would set up a stall outside and sell them lemonade :OD

Yeah, don't drive your car into a ditch, that wouldn't be good.
The old organ is a cool find and so is the stained glass. Those pieces of stained glass would be cool in a small frame.

Yeah, don't drive your car into a ditch, that wouldn't be good.

Wales is like this, packed with very small roads with nowhere to park. Abandoning your car is the only option.

I see. I guess you just get used to it then and eventually you know no how far you can push it to the edge lol

A quite interesting place.

Not the most robust of structures, so you would think it would not last long. Shame about the floor, but the remaining windows are nice. I wonder if anyone will consider it worth preserving. Not that many people go to church these days and preservation is expensive. We don't have to keep every old building for ever.

It could well be Grade listed, and is on private land, though it's a strange place for a church (close to a farm in the middle of nowhere). It had a certain quaintness about it that I can't pin down.

Oh my!! This looks really scary to go in and you went in despite the barbed wire, that's really brave of you.
Nice write-up by the way, I enjoyed reading through.

That organ is incredible!!!

That piano scared me a little bit, lol. I don't know if I would dare to enter that place, hahah.

You know how to find cool abandoned houses! I admire you!

love seeing the old stained glass still intact. and the organ is a cool find! I don't think I have ever heard of a tin church, pretty cool tho! I bet a service in the rain or hail would have been intense, but musical!