BNB is mooning right away 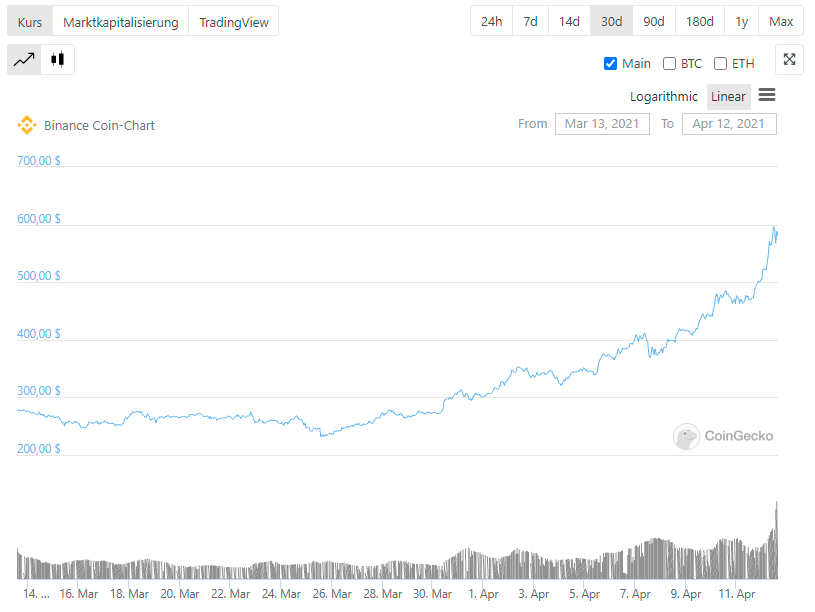 As one of the best performing crypto assets this year, BNB has marked another ATH today. Starting with only $37 into the year, BNB has gained a massive 1,649% to the recent top of $610. Its's market cap now stands at $90 billion, $17 billion higher than the fourth-placed XRP and more than twice that of Tether at fifth place.

It is a good question what is substantially behind that massive price surge. An upcoming token burn recently announced by CEO Changpeng Zhao, the Coinbase Nasdaq listing on Wednesday, April 14 as well as the massive growth of the Binance Smart Chain (BSC) are suggested.
Critics state that BSC is an Ethereum copycat with a centralized validator set only.
However, Binance which is the centralized validator behind BNB is succeeding to capitalize on the failures of Ethereum, especially high fees and slow transactions. Traders are increasingly seeking alternatives, and BSC has emerged as a strong contender. To burn 100 million BNB, or roughly half the token’s supply, as announced by Zhao will have a positive price impact per se.

The growth of BNB is really astonishing and although it is an ETH copycat - it is a very aggressive one, backed by a Crypto exchange that has a bigger ecosystem, provides more trading pairs, is available in more countries, and has bigger profits than Coinbase has.