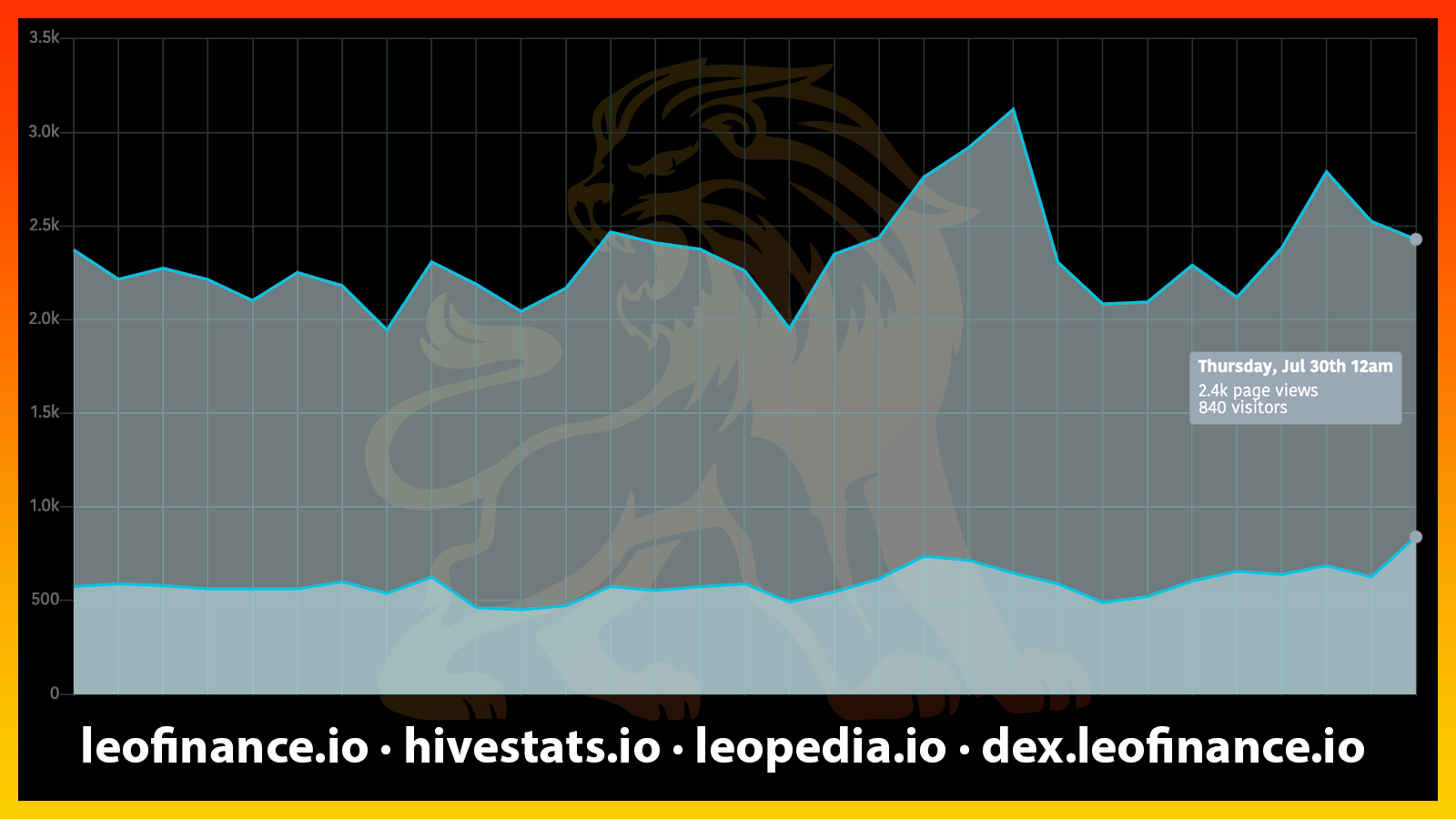 Yesterday - July 30th, 2020 - was our highest day for ad revenue and website traffic on LeoFinance.io. Our official ad buyback & burn report for the month of July will come out tomorrow, but today's post will highlight a historic day for our ad program.

First, I'll briefly describe our ad program for anyone who might not be aware of how it works:

The LeoFinance community operates 4 websites - hivestats.io, leofinance.io, leopedia.io and dex.leofinance.io. Each of these websites contain various ad placements. As visitors and returning users view our portfolio of websites, we collect ad revenue each day.

The revenue is paid out as Bitcoin and then is converted into HIVE on an exchange. From there, we send the HIVE to the @leoads account. We then go to Hive-Engine with that HIVE and buy LEO and then permanently burn it from the supply.

If you'd like to support the LeoFinance community and help us generate more ad revenue in BTC to buy HIVE and then buy/burn LEO, then please consider turning of your ad blocker/brave shields and utilize our Hive-based websites.

Our ad revenue has been steadily increasing over the past several months as we successfully transitioned to Hive and added Hivestats and LeoPedia to our portfolio of ad-bearing websites.

For the past month, our average numbers each day have been (See Chart 1):

Some days are obviously higher than others and the ad revenue often fluctuates wildly on a day-to-day basis as we see attention increase/decrease from various sources. The general focus of LeoFinance is to increase our average monthly numbers (i.e. the ones detailed above) over time.

Where's the Traffic Coming From?

Our traffic on LeoFinance.io (and our other sites) is steadily growing over time - which is what we like to see. Yesterday uncoincidentally marked an all-time high for LeoFinance.io traffic: 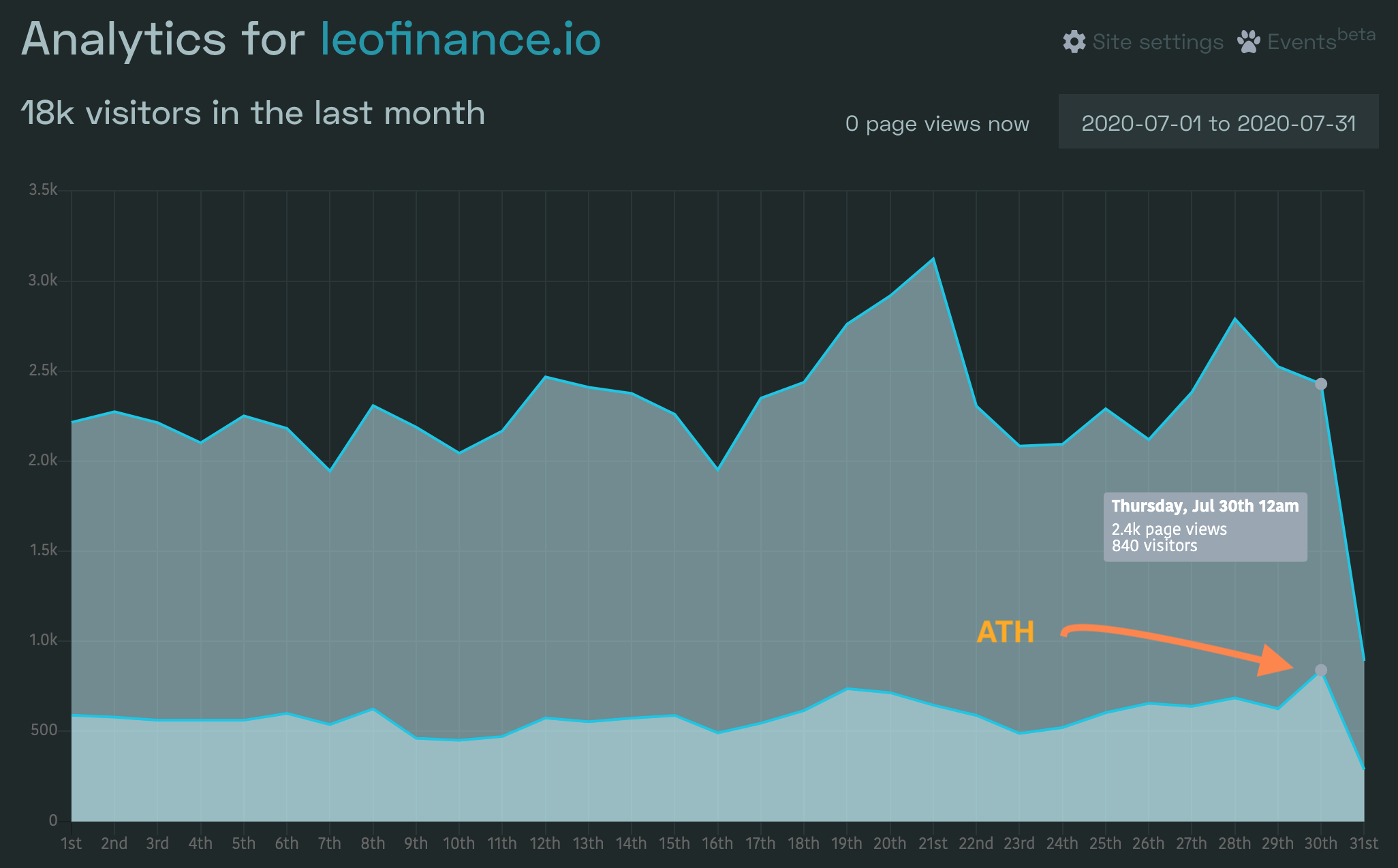 From the traffic details, you can see that we typically receive the majority of our traffic from Twitter, Google and Reddit:

Yesterday's traffic details tell a bit of a different story. We saw a spike in internal traffic alongside a new category (reddit.com). If you look at the top post that day (in terms of traffic), it was one written by me (@khaleelkazi) which was promoted on the Bitcoin subreddit by @trumpman - LeoFinance article "trending" on the Bitcoin Subreddit

A Reminder of Fundamental Growth

This post is intended to serve as a reminder that the fundamentals of our community and project are growing. We're ramping up development on all fronts and we are also seeing new all-time highs and more importantly, a steady rise in average daily traffic and ad revenue; two of the important fundamental indicators of success for LeoFinance.

Doing anything we can - sharing links on Twitter, Reddit, Facebook.. inviting friends.. emailing article links.. etc. - to increase these metrics can have a profound impact on LeoFinance in the future.

The brand-new LeoFinance.io Hive-based interface is still under development. We were planning on an open beta test program starting today, but it's being delayed until next week while some of the major bugs are worked out.

When the beta test program opens up, we'll ask you (our users) to test the site, make some posts and discover any bugs that we've missed. The initial launch will also not be the full version of the website and will have only the core features. Each week or so, we'll finish development on more of the core features and roll them out into the testing program to discover/fix bugs.

It will be an interesting and tedious process, but in the end we will have accomplished two major things for our community:

Perhaps the most exciting thing for us is that we'll drastically improve our ability to add new features and tweak existing ones on the new interface. Working with Steemit's condenser interface sucks and having something built from the ground up specifically for our community will open the doors to future potential that could never be tapped into on condenser/nitrous.

Wow. Fantastic. Where do I locate buying ads?

This is my favorite post every month. I love watching the stats and numbers rolling in as you build a solid community from the ground up. I hope to see others follow suit in the future as communities like this add value to the whole eco-system.

It will be interesting to see next how you will go with onboarding specifically to your community rather than hive as that was one of the directions I expected communities to take from the very start. A thousand tribes with their own user base adding value to the eco-system.

Sounds exciting and encouraging. Keep up the good work :)

Congr ads. Very impressed by how you guys are growing. Although I create no content that would be suitable for your site I am happy to up my stake of Leo tokens as I believe your success will continue so, each day I buy 10 more tokens and usually get another with my mega miners. My ad blocker is off for all your sites and I will come check out the advertisers.

Leofinance is really doing well. More records to be set

"This post is intended to serve as a reminder that the fundamentals of our community and project are growing."

While its a bit old right now, but I went back and listened to the LeoFinance Valuation podcast. If you're a LEO investor and you havent' listened to the chat, it's definitely worth checking it out.

Great work! It's awesome to see the Leo community grow and develop its own identify and user base!

Great job! Keep up the good work!
We will all keep growing :)

Those are some solid CPMs for the traffic you're getting probably because its to fintech started you're getting better CTRs for advertisers. Pitty there's so few inventory on coinzilla but for 18k visits that's not bad at all. I can imagine with the new UX and as it continues to grow this will only put further pressure on the LEO token the longer we keep going the more these effects compound

Great to see some real business evolving that are not just pyramid schemes.

After moving off of nitrous - will you save any BEE in fees or is it already sunk?