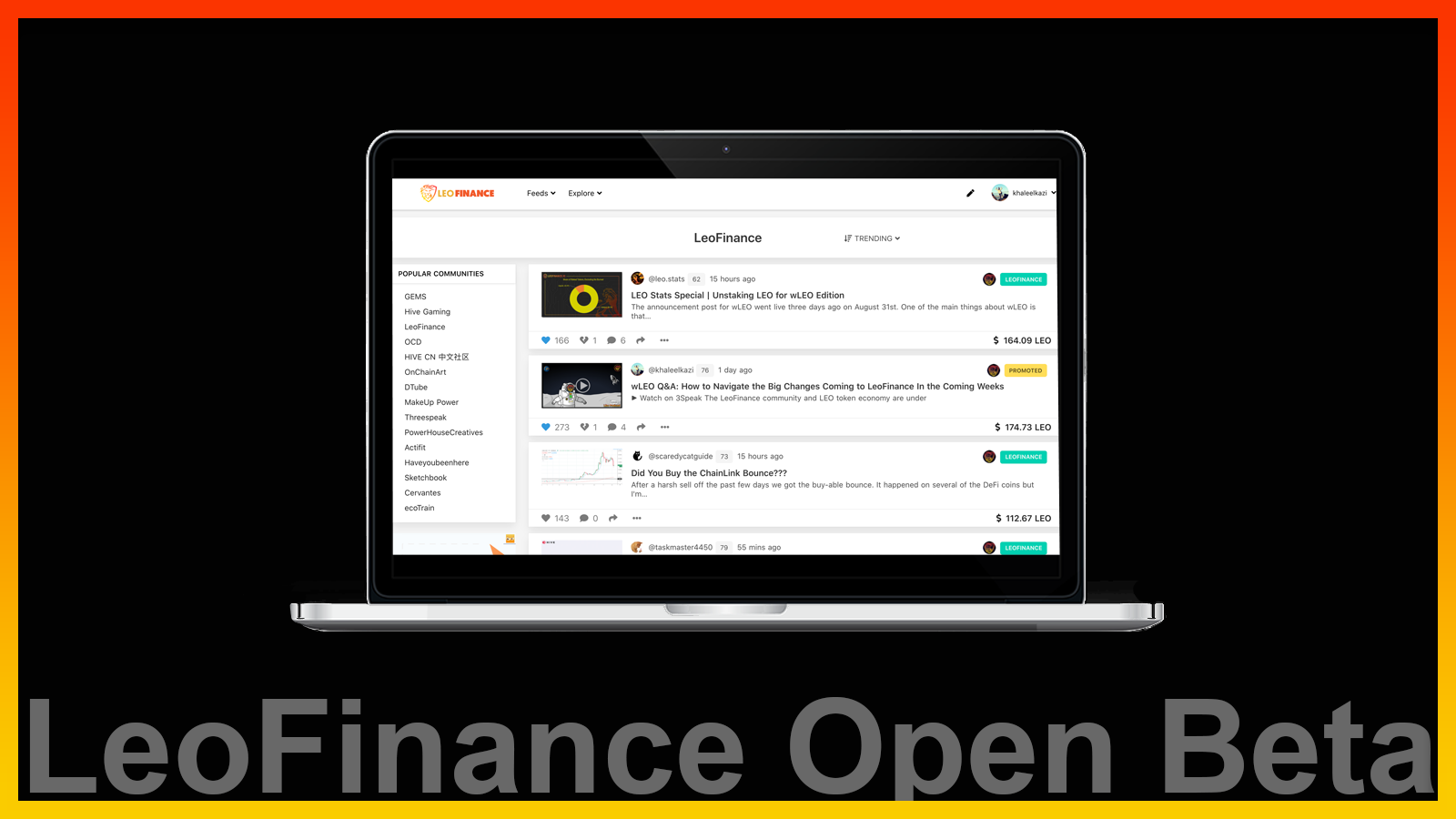 Nearly 14 months ago, we launched the Steemleo tribe on the Steem blockchain. Launching a community and creating the LEO token was an amazing achievement and it took a lot of effort to get to that point. We had created a model for the LEO token that worked and since the beginning, have been an active and thriving community of crypto and finance creators.

Since then, we've changed in more ways than I ever could have imagined. Adding new apps, releasing new features, growing our community members, etc. When Hive launched, we quickly rebranded to LeoFinance and changed many of the aspects of our community.

We made updates to condenser (the forked build of our leofinance.io blogging interface), adding things like a user dashboard, a tradingview ticker bar and many other UX-oriented changes. We quickly realized that condenser's code was clunky and hard to change. To make the grand innovations and overhauls that we had in mind, we would have to rebuild a new interface from scratch.

LeoFinance, From the Ground Up

Building a brand new blogging interface that is connected to a blockchain is no easy task. It's been months in the making and if you follow LeoFinance on Hive, Twitter, the podcast and elsewhere, then you've grown accustomed to seeing teasers of the new interface as new features have been added and our development has continued.

To reimagine LeoFinance, we first had to build a solid base layer. Anything worth building must first have a solid foundation to build up from. For this, our aim was to create a PeakD-like experience: 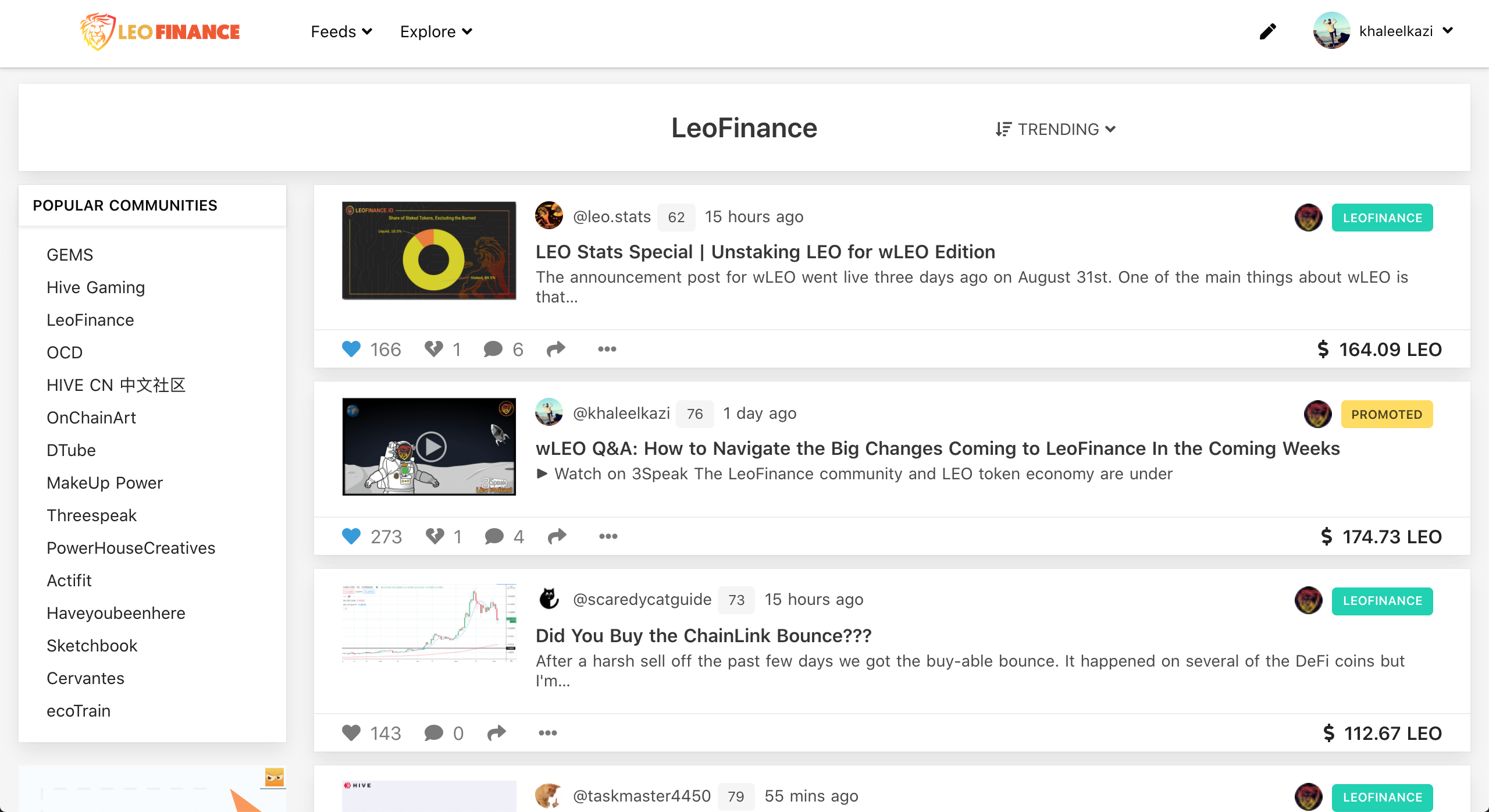 If you go to the Beta interface now, you'll notice that it resembles PeakD in a lot of ways. As we've mentioned throughout the development process: the goal of V1 is to create a PeakD-like experience and iterate on top of it. In the coming weeks, you'll see many new developments hit the interface that will tweak the experience and make it stand out.

We have an incredibly long list of features, design ideas and integrations that we've always wanted to add to our website, but weren't able to thanks to the limitations of condenser. With this new interface, we now have the flexibility to add anything imaginable. We can finally integrate the ideas that turn LeoFinance from a simple blogging interface on Hive into a full-blown media company that retains readers and onboards new authors.

So far, we've spent the last few months building the interface and adding the core features. A few of us have been doing a closed beta test to find some of the major bugs and hammer them out before releasing it to a wider group. Now we're looking for open beta testers to help us discover new bugs so that we can fix them before launching the interface into production and replace condenser once and for all.

The interface is now accessible to anyone. Feel free to use it as you normally would and drop suggestions in our Discord channel labeled "interface-beta-testing".

With that said, I've already begun using the interface for more than 90% of my Hive-based activities and it is far and away better than our previous interface. I recommend using it as much as possible and dropping your suggestions in Discord so we can quickly iron them out and move into production. Have fun :)

To finish this off, I'll highlight some of the core features and pages of the new interface. Keep in mind that this is just the base layer of the cake. Over the next several days and weeks, the LeoFinance interface is going to change drastically as we redesign the user-facing layer of the UI. 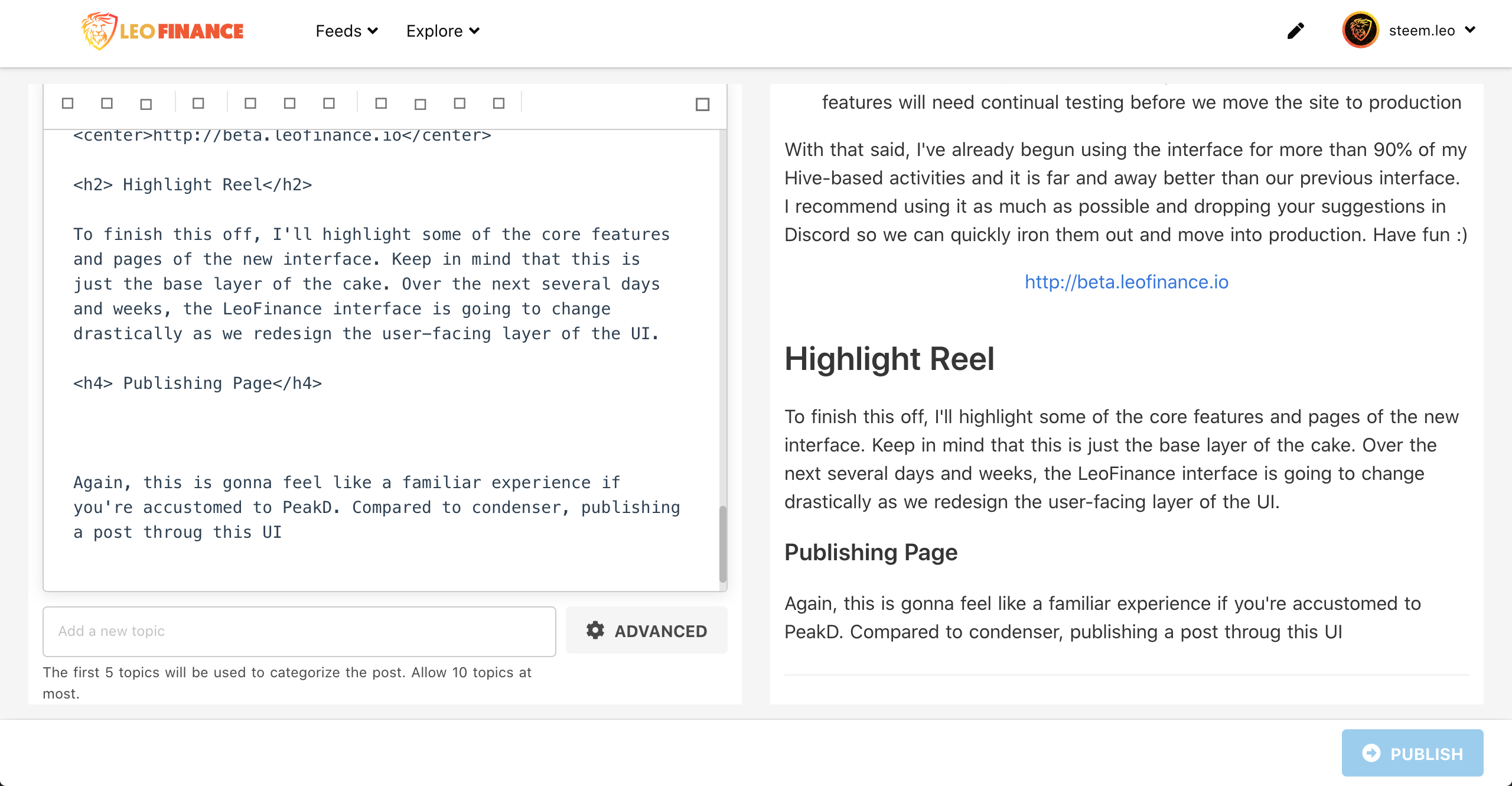 Again, this is gonna feel like a familiar experience if you're accustomed to PeakD. Once you make a post through this UI, you'll never want to go back to condenser. In the next major release of this interface, we'll add even more advanced features like scheduling posts, user customizations and more. 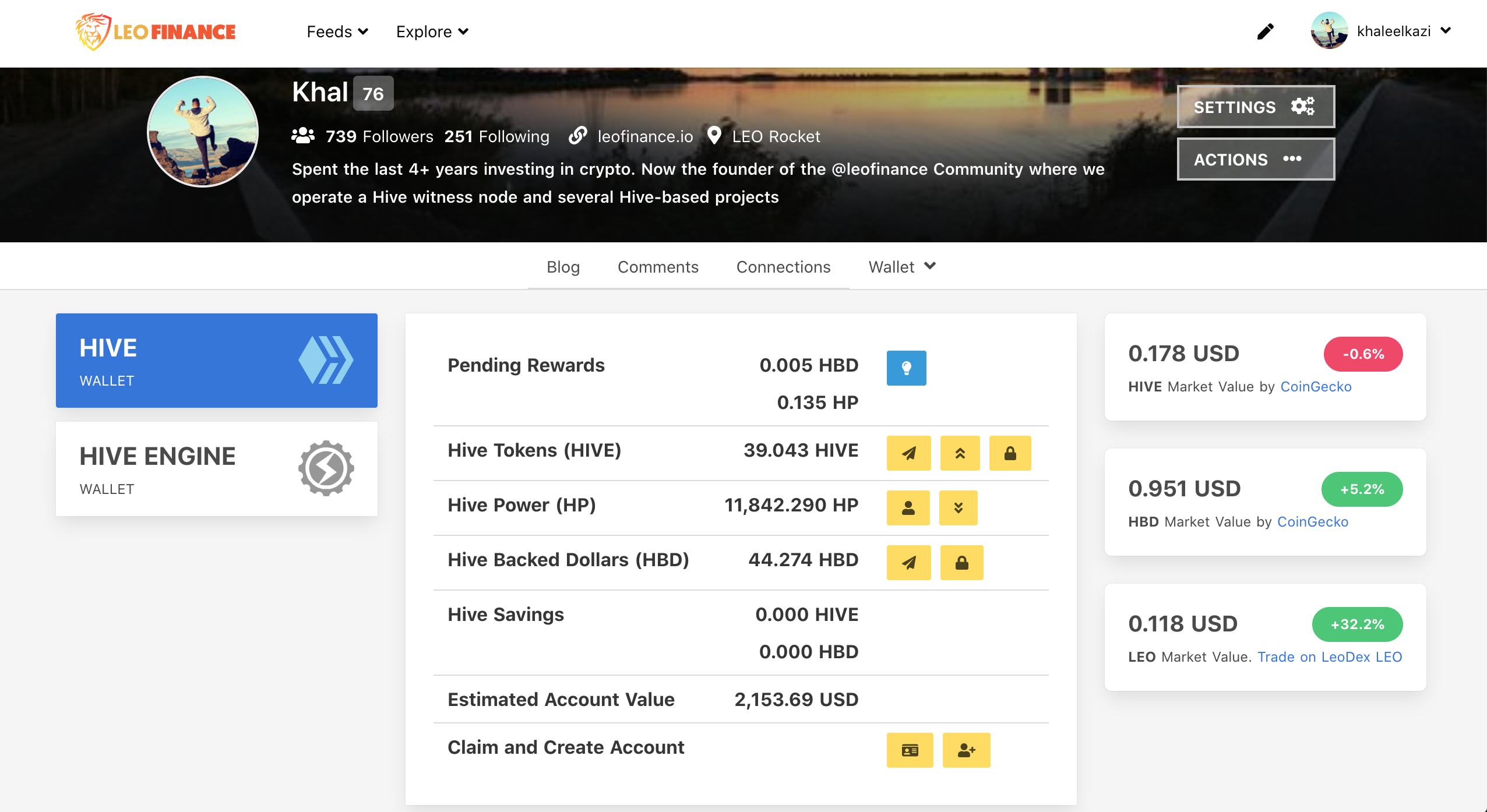 The first thing you'll notice are the HIVE/Hive-Engine Toggles on the left side. You can use these to toggle from between your Hive wallet and HE wallet. We've also gotten a few suggestions to make the default option a "LEO toggle" which will be added soon to create 3 options.

On the far right, you'll see the HIVE / HBD and LEO real-time prices. While the rest of crypto has tanked, LEO has skyrocketed 🚀 - fun times.

The wallet UI features many of the core functions needed on Hive. You can use the interface to:

Below the main wallet UI, you'll find your HIVE transactions. This will default to rewards + send TXs. In the current form of the interface, you can choose a specific day to go back to (as opposed to scrolling for pagination). In a future version of the UI, we'll add a calendar search feature that will let you find TXs for specific days going back through the history of your account:

The Hive-Engine tab will show your HE token balances along with your LEO-based transaction history. We have a few important updates to make to this part of the UI which will be released to the beta version in the coming week. 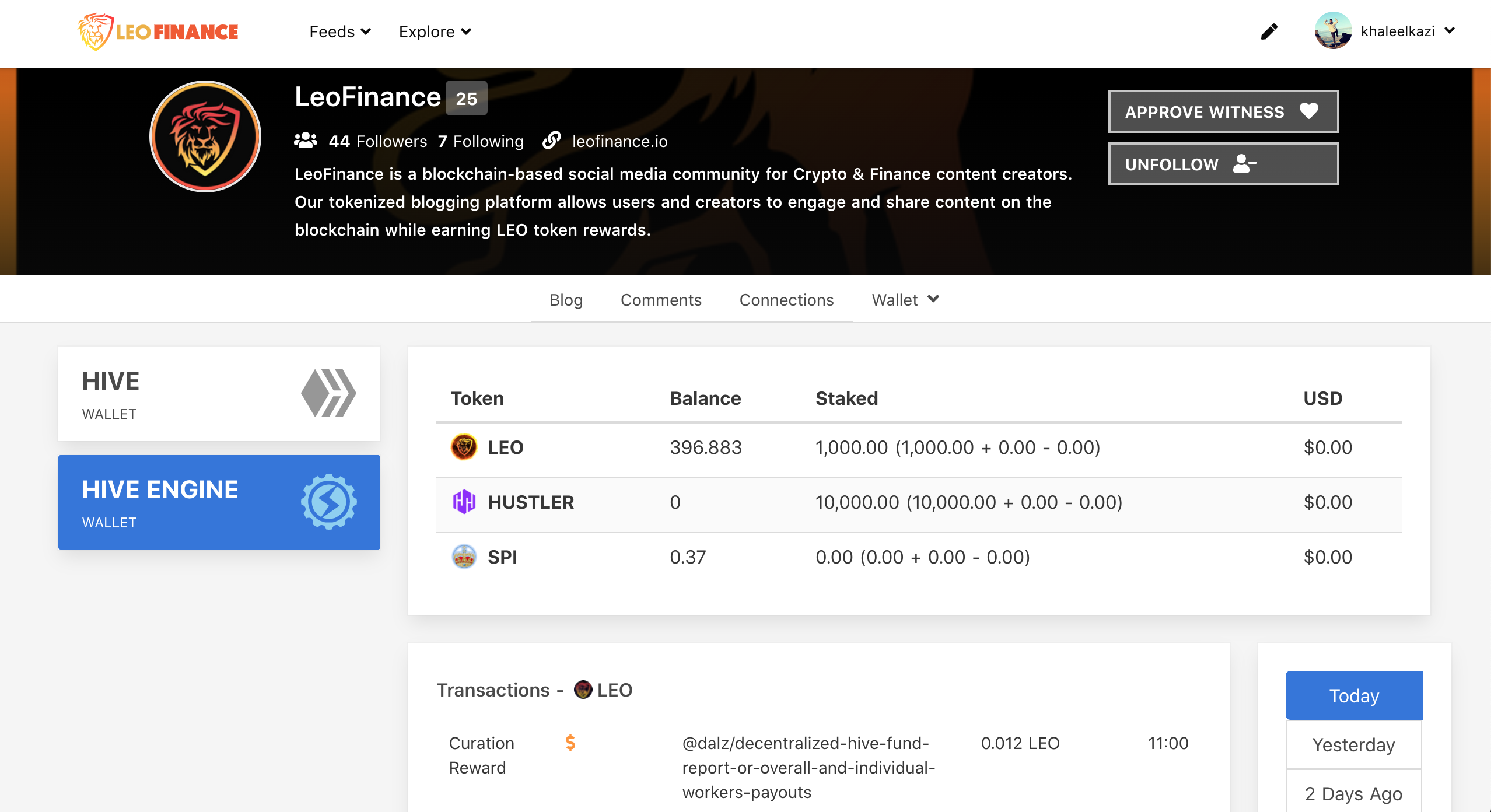 The activites page shows your overall Hive-based activites and has some date + operation filters on the right: 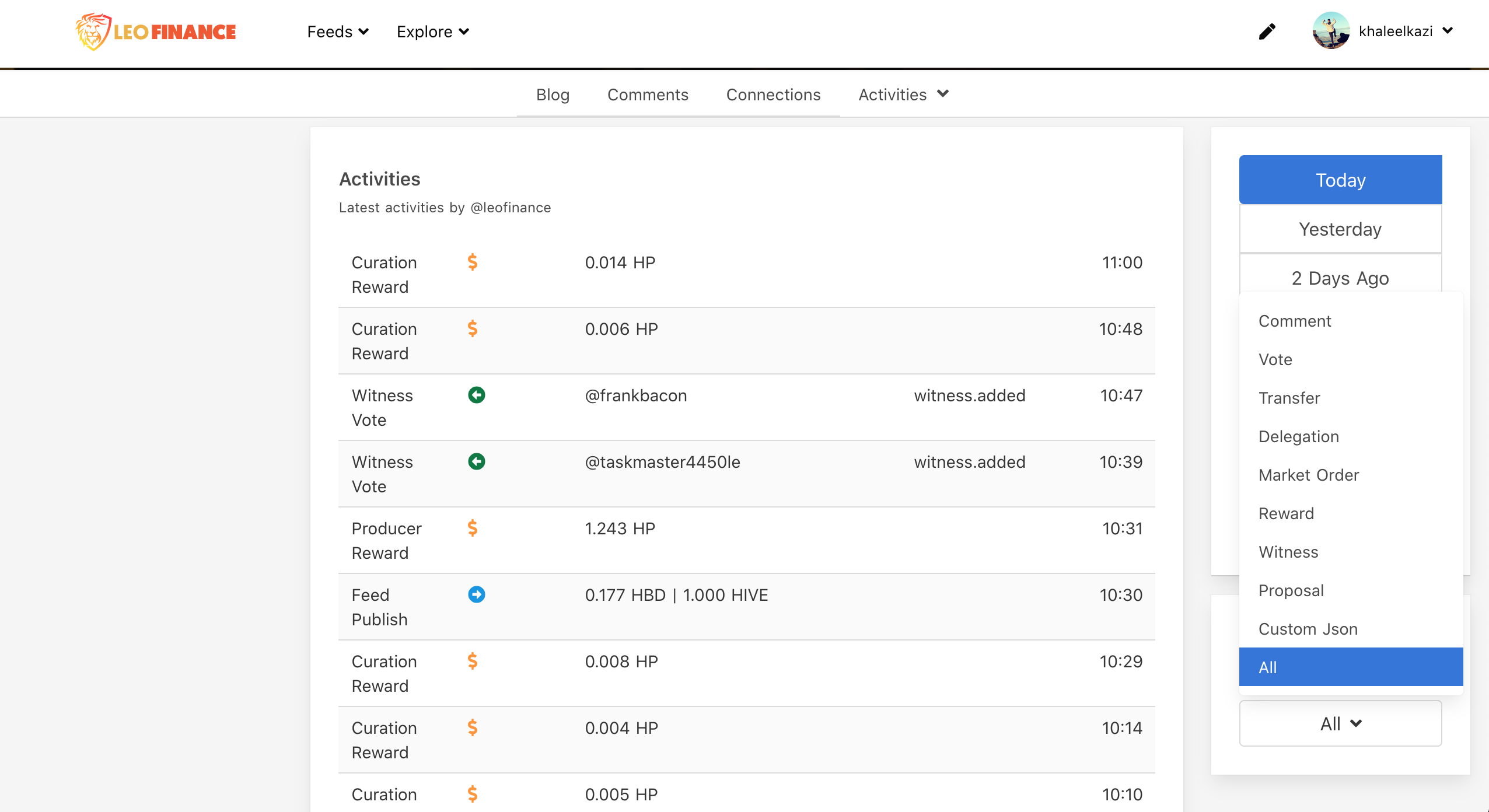 The profile page has some awesome features including the blog filters. This is another PeakD feature that I really enjoy and I'm happy that we included it in this version of the UI. It allows you to quickly navigate the profile of your favorite blogger and find topic-based posts or even find something that you've written in the past. 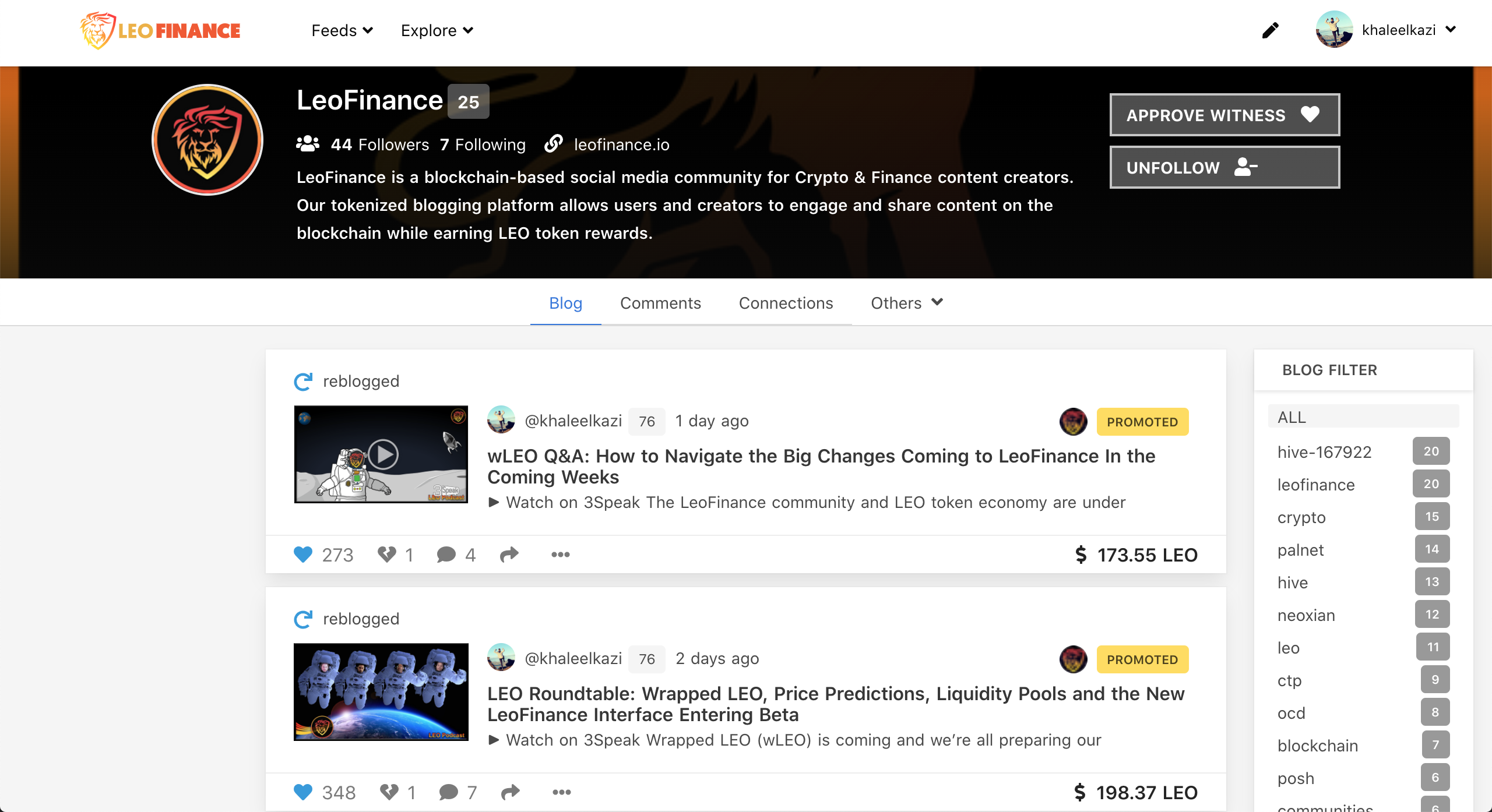 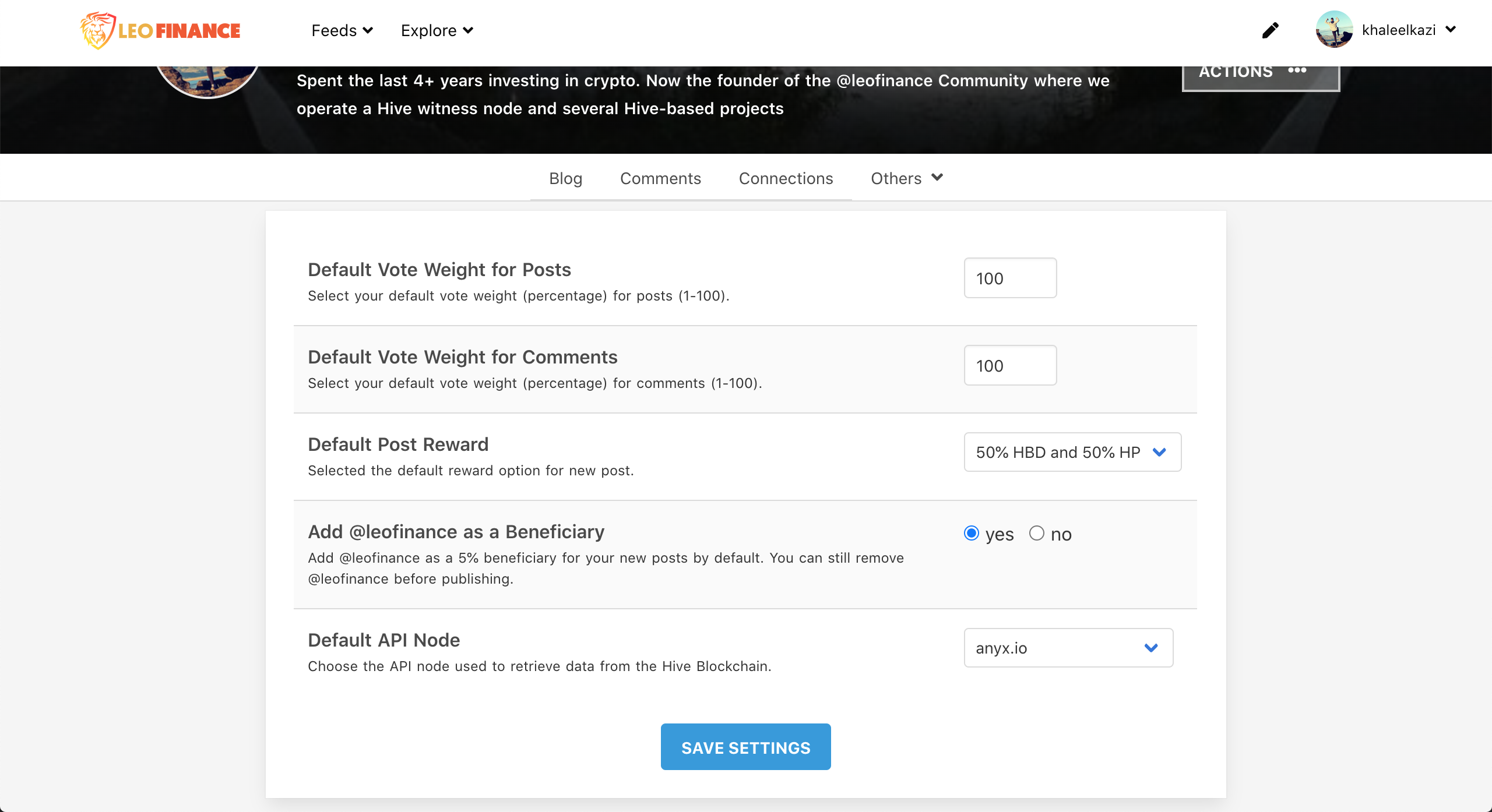 From the profile page, you can navigate to your Settings. This will let you change a few UI based defaults:

Just click on the "Actions" button from your profile page and then select edit profile to change your profile details on the Hive blockchain. Again, a familiar experience :) 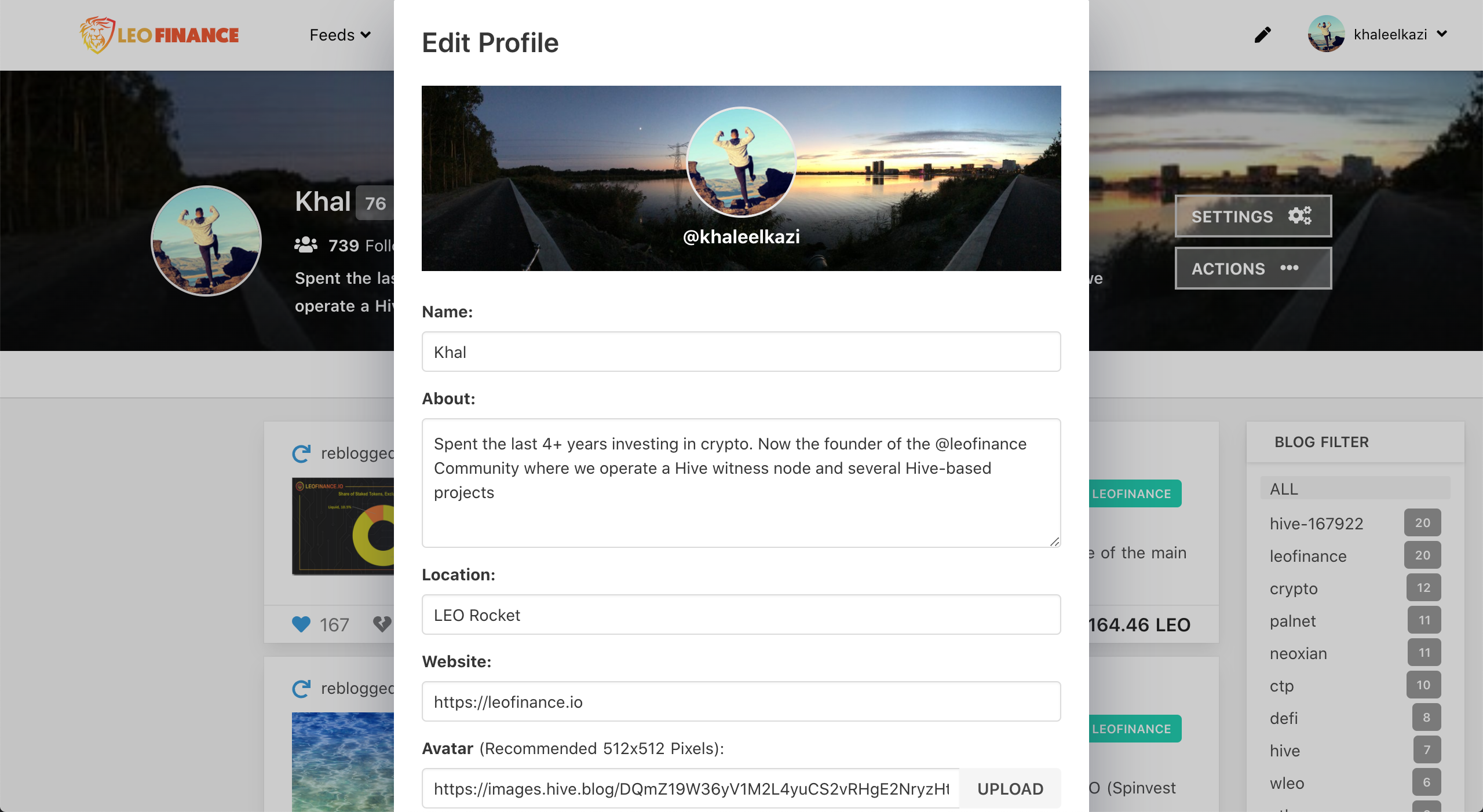 The connections page is a fun way to track your followers and the people you follow. From here, you can see when their last post on LeoFinance was and also their LEO power and LEO vote value at 100% VP. 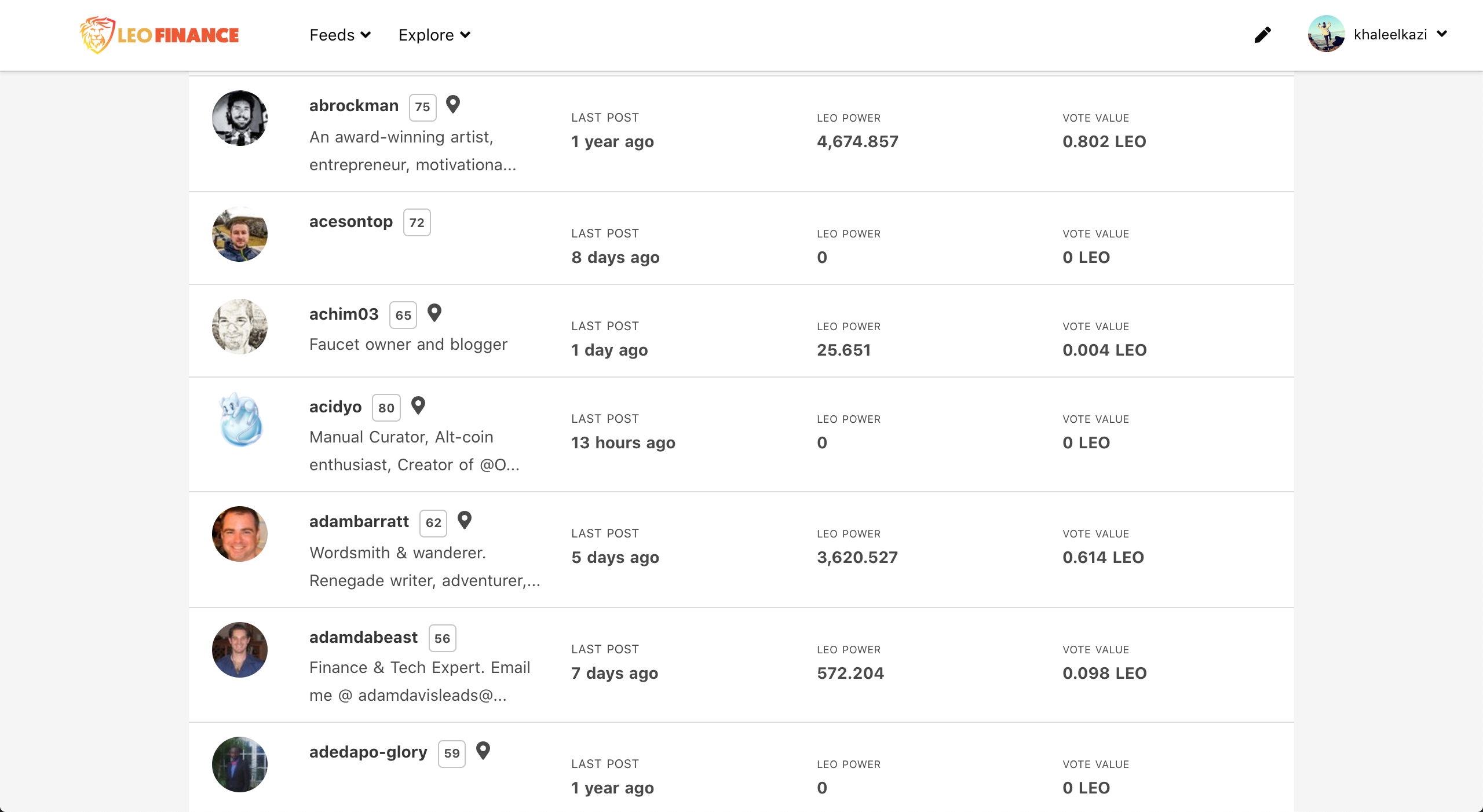 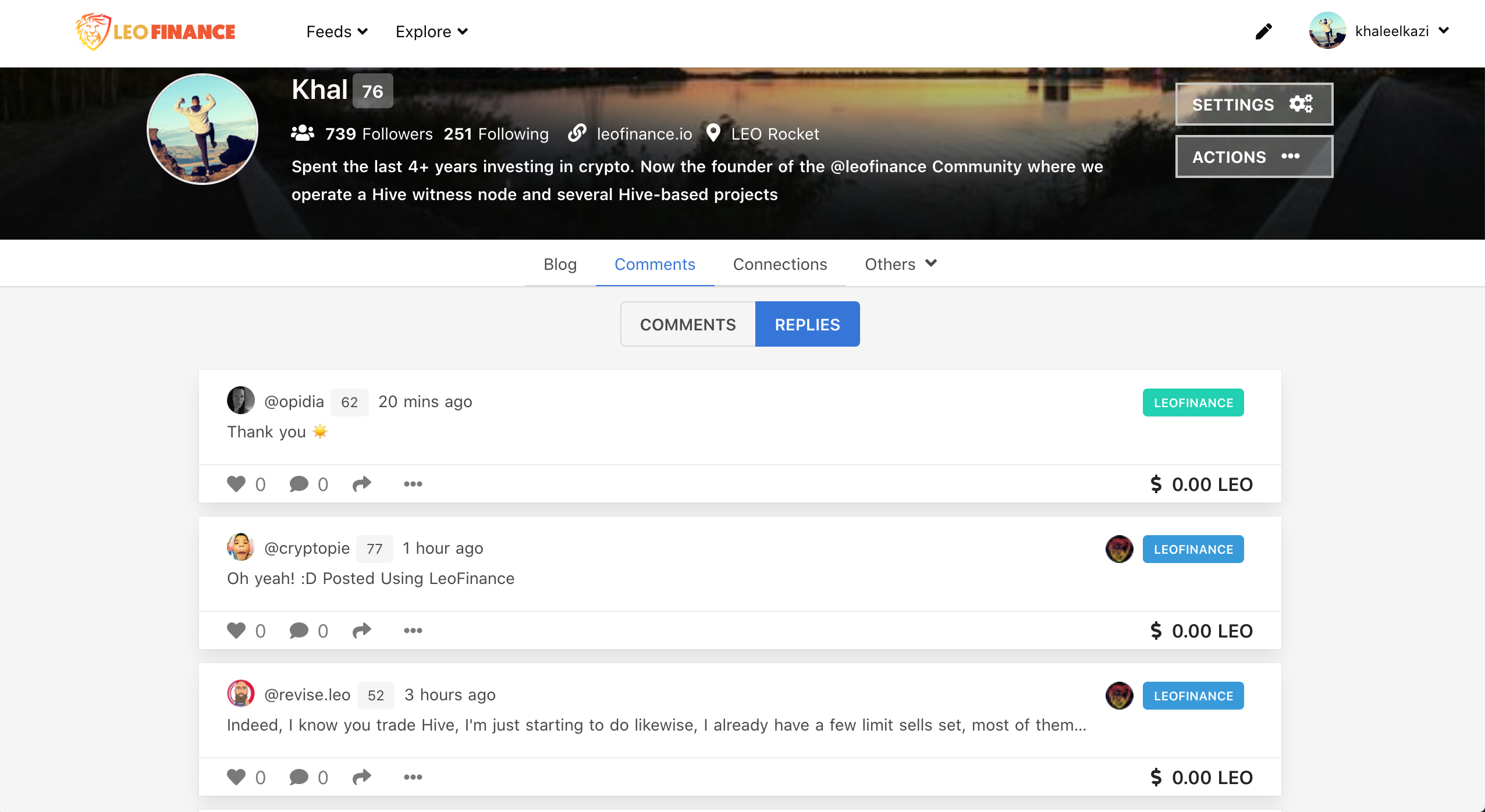 Ads are one of the primary sources of revenue for the LeoFinance community and LEO token economy. We use all the ad revenue that is earned to buyback LEO from the open market and burn it permanently from the token supply. You can read more about our ad program here.

Our old UI didn't handle Ad placement well. It was a clunky and cheap feeling in my opinion. Among many other things, the new UI allows us to tweak everything to our liking. The new ad placements on the Trending page, post feed and comment feeds look far better. 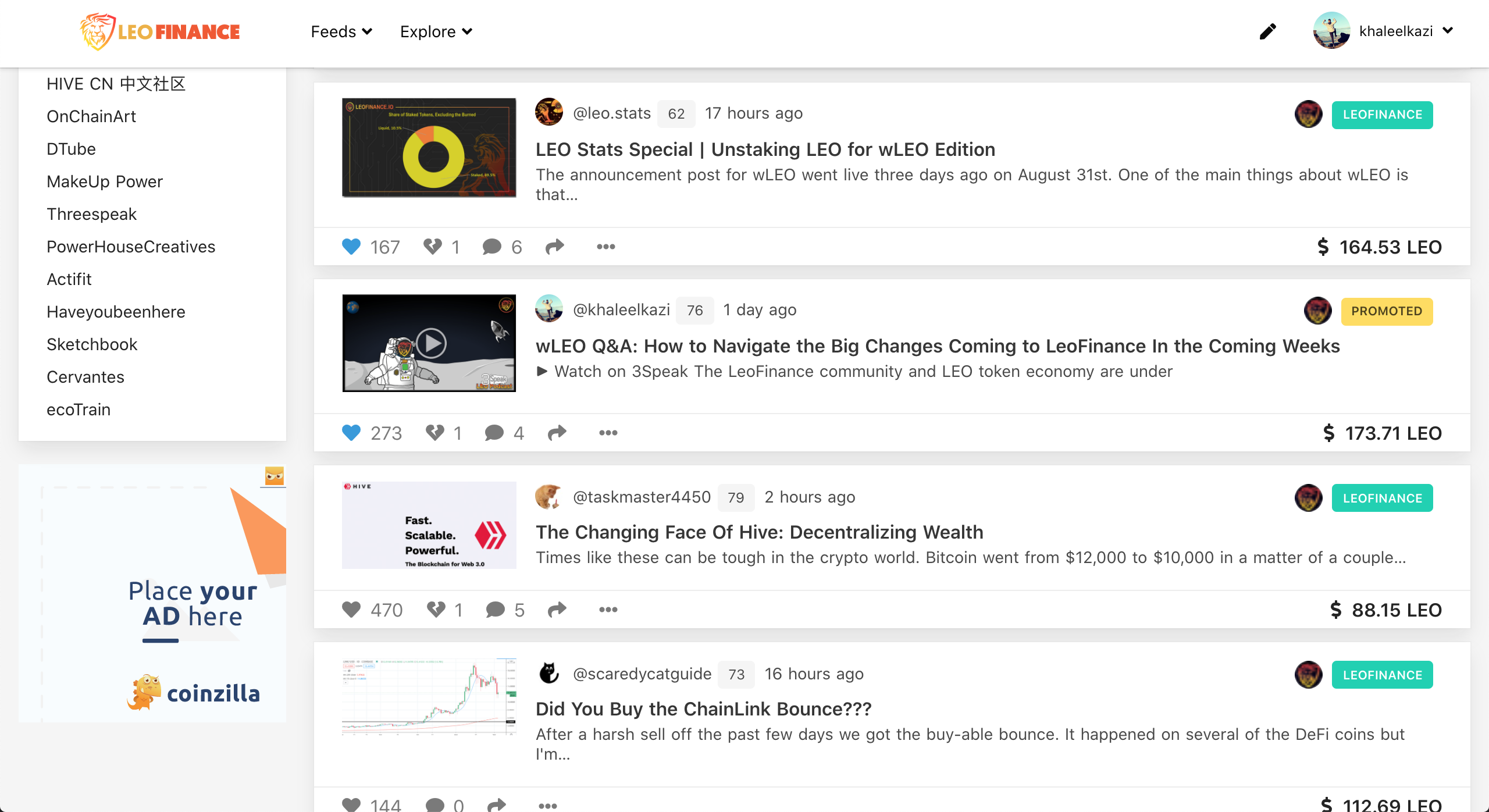 Our 2020 roadmap outlined the current projects that we're working on. Since releasing that roadmap, here's our updated progress:

A lot has been happening in our community over the past 2 weeks. We announced the launch of wLEO and the upcoming exchange listings for our comunity token. This has launched our token to new heights as a buying frenzy for liquid LEO has begun. We're also seeing a record number of users on our interface coupled with this highly anticipated beta release of our new UI. 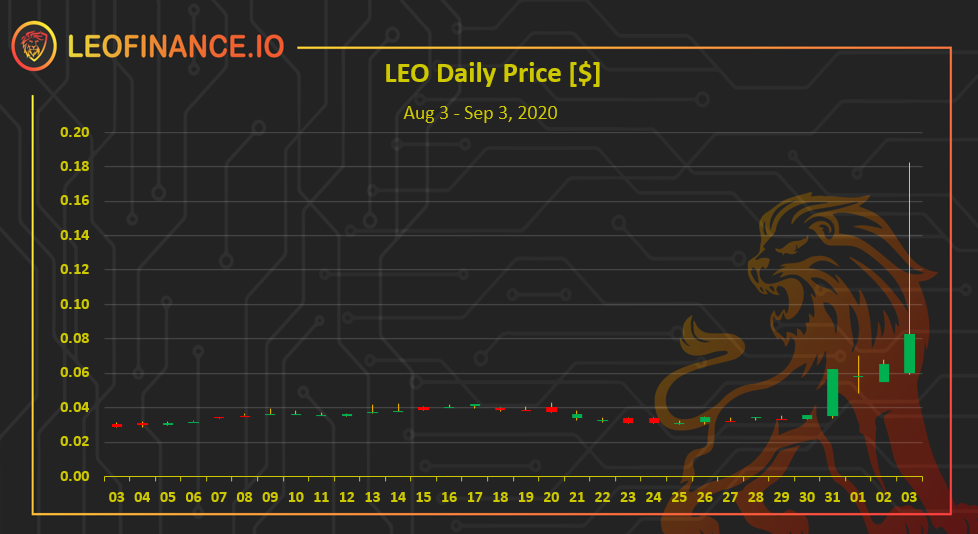 p.s. if you'd like to opt-in to ads on the new UI and support the LEO Token Economy, then consider turning off Brave shields/adblocker 🦁 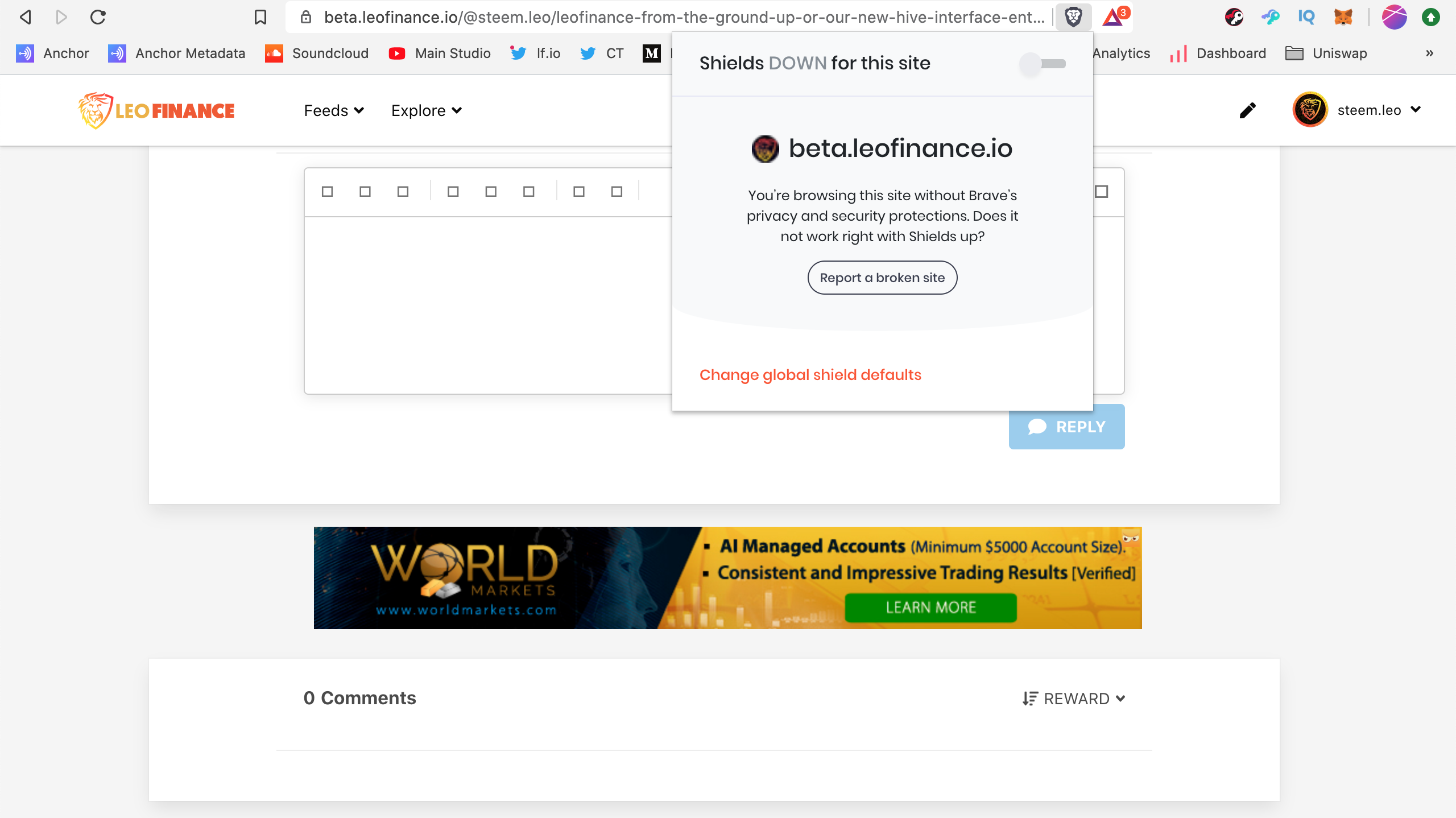 Mobile update is coming soon, just for you!

@trumpman is not the only one who enjoys mobile version :P Looking forward to the update

You're welcome @lekezeal
Support us back and vote for our witness.
You will get one more badge and more powerful upvotes from us on your posts with your next notifications.

Fantastic! Brave shield down and off we go!

lol brave shield down for ALL leo products for me

I'll give a whirl next couple of days!

Loving it, can’t wait to start scheduling on leo it’s been the one reason why I don’t post directly on the interface

The new site is sooo clean compared to the old one, love it.

Really impressive, well done!!!
BTW, I tried to claim an account without success... did you experiment the same issue?

This is a long waited release and I will probably use more now the LeoFinance interface then previously as I liked PeakD so far. With it I believe the community will use more the Leo Finance tools which is great for the economics from here.

Very happy to see this Hive.Blog is great, but it's really the base level so it's good to see that Leo is here to make sure that they, and PeakD have to keep innovating in the same way they push LEO to keep pushing forward. I also really love the Publishing page. A nice WSIWYG display is essentially for any modern posting platform.

Glad that this post came. All the Leo thunder was grabbed by wLEO. I was more interested in this one. Certainly feels like Peakd. It is way cleaner than before. I don't know why but I am using it not on dark mode.
ra

This is awesome... LEO token is getting hot!

Congratulations on your hard work! Months of dedication were very worthwhile, because the presentation of the new beta is incredible!

Success always for LEO and it is a great pleasure to be able to experience all this.

Looking nice! Will give a try soon for sure, when I start blogging about crypto and finances again

its credible and effective article

Good wishes from my side towards the future journey of Leo Finance.

Have a wonderful time ahead and stay blessed always.

Trade on all cryptocurrency exchanges from one interface! - https://jamm.to/

Trade on all cryptocurrency exchanges from one interface! - https://jamm.to/

Thank you for voting me!