I really hope you are reading this, because I have had some trouble publishing it and have had to recreate the whole thing.

I am a dumb cub after all and didn't save an off-chain copy before trying to publish. I think it went to the same place where socks go in the laundry.

I am steemstreems and I am a DUMB CUB.

Many of you may not know me, because I rarely post (obviously because it is too hard for a dumb cub like me). I have been around since the beginning of LEO though.

I invested quite heavily and became a "whale" (whatever that means), but have not interacted too heavily in the public sphere other than voting and occasional comments.

The reason I am coming out of my shell to post now is that I made some stupid mistakes. I figured if a "genius" like myself could be so dumb, then surely there must be others out there who are just as obtuse :-)

If I can save even one person from being as dumb as me, then I consider it my duty to do so.

OK. So here's what happened. I was following discussions on Discord (highly recommend by the way) and the great @edicted made a comment about how the trade link on Cubdefi was still V1 and was concerned that new people were using it and getting wrecked by slippage.

I thought yeah. Those people are getting screwed. They don't know what they are doing. I mean... I use V1, but I know how. You see, I have lots of tokens and do lots of swaps and trades with V1. I break 'em all down into small bites and make sure the price impact is less than 1%. I mean, I pay some fees, but I am gaming it. I am the shit!

Well, I did a little bit of looking and was floored! Completely flabbergasted! You see, just the day before I had traded a lot of CUB for bLEO (using V1) and moved it back into hive-engine to purchase some NFT's. The best I could tell I had left HUNDREDS of dollars worth on the table (someone else's pockets really).

My ego popped like a balloon at a porcupine party and I quickly changed my ways. Now I am here to hopefully prevent others from throwing away their hard earned CUB.

The trade/exchange link on Cubdefi accomplishes all of your swaps in version one (V1) pools. That is V1 of pancakeswap. Pancakeswap has now switched to version two (V2). This means that almost all of the pool liquidity being provided on pancakeswap (what Cubdefi is based on and uses) is going into V2 pools. Thus there is very poor liquidity on V1 pools.

For me, this meant that I was a big old whale that was flopping around in a kiddie pool. I thought I was "swimming", but I was really just tearing my belly to shreds on the bottom of a pool with no water in it. I had no idea that I was so stupid!

Maybe I will use my poor screenshot skills to try and demonstrate. 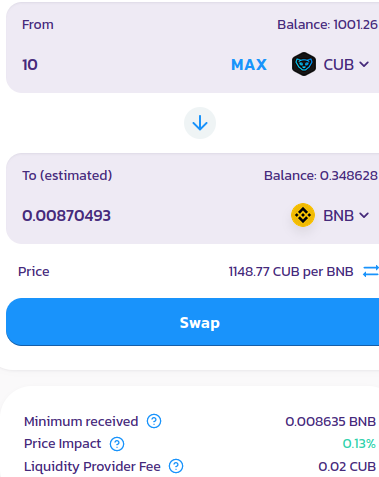 If one were to do a 10000 Cub to BNB trade the difference in BNB received would be at least 25%. I'm not sure it would even go through though on V1 because of poor liquidity.

It's really very simple. Do not use the link on Cubdefi to swap any tokens. Instead go to Pancakeswap Exchange Page and make all of your swaps there.

You will have to connect your wallet just like on Cubdefi. You will also have to possibly add some tokens into the Pancakeswap Token list manually. To do this, you need to click on Manage tokens and enter the token address manually. Once you do this, you won't have to do it the next time.

The swapping process then proceeds just like on Cubdefi. You will get better pricing than on V1. Simple.

Once again I have to thank @edicted for opening my eyes (albeit unwittingly). I reckon I owe him lots for the future savings I will garner.

In addition to all of the above, I did some further digging and realized I was basically doing similar dumb things on hive-engine. That will have to wait for PSA #2.

If any of you smart cubs have corrections or better explanations than the above, feel free to expound in the comments.

Thanks for the information. I'm grateful for your post. It will really help on how to swap on it.

No problem. I think it is no longer an issue. I believe they are or already have deprecated that link so it can't be done!

I thought the transition to V2 was made a week or two ago.

Ha Ha! Maybe so! I spent almost four days trying to publish this thing because, you know, I am a dumb cub :-) It seemed apropos when I wrote it.

I do think they have now deprecated the link in cubdefi, but it was still working two days ago for sure. That's where I got all of those screen shots ;-)

Congratulations @steemstreems! You have completed the following achievement on the Hive blockchain and have been rewarded with new badge(s):