Hive: The Ideal For The Combination Of Social And Finance

We have discussed how the future is the combination of social media and finance. This is something that Elon Musk is bringing to light with his "Everything App" idea. Of course, Hive was working on the development of this for years.

It is to the point where some are calling Hive "the everything protocol".

Since we are going to see the tokenization of everything, it is obvious how social media platforms will also have financial aspects to them. Couple this with decentralized exchanges along with other DeFi features, we can see how social media networks in the future will be completely different.

Hive is that way now.

What is it that positions Hive for the transition that is coming? The fact that it is truly decentralized is what separates it. However, there are other aspects that really align Hive with what is coming. 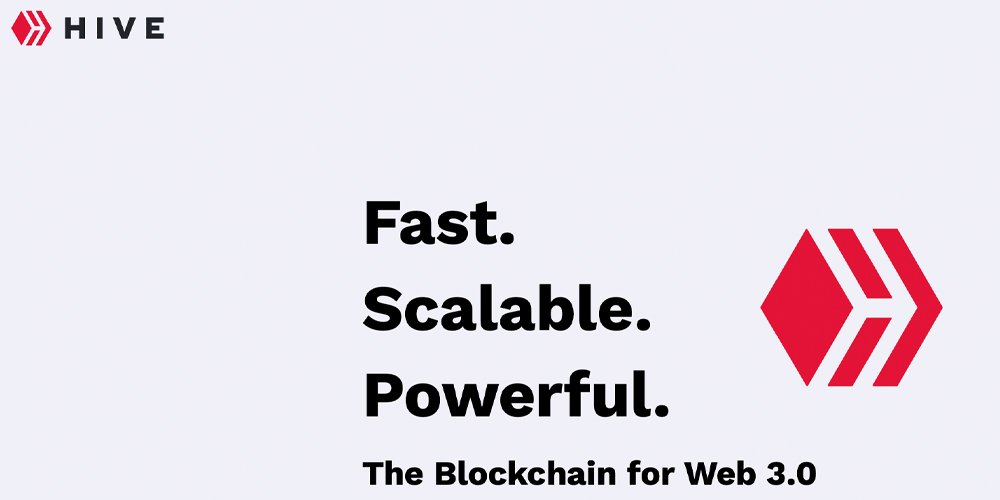 Hive is one of the fastest decentralized networks. It carries a 3 second block time. This is important for social media applications. To put it in context, we see Bitcoin operating with 10 minute block times.

The drawback to decentralized networks, as compared to those which are centralized, is speed. We know that there will always be a lag when it comes to the former. That is why having as much speed at the base layer is vital. This is not the only answer but it is a point of foundation.

Speed is also something important when it comes to financial transactions. It is especially true when it comes to payment systems. While settlement can take a lot longer, the confirmation of payment has to be quick. Who wants to stand in a check out line while it takes 10 minutes (at a minimum) for blocks to confirm? Even worse, who wants to stand behind someone like that?

Hive offers the ability to conduct transactions in 3 seconds. Of course, this is max time. If a transaction is initiated half way through a block, then the time is 1.5 seconds. Even if there is something quicker out there, a few seconds is useful for both social media and finance.

This is something that doesn't get the attention it deserves. When it comes to transaction fees, we saw, during the last bull run, how detrimental this could be.

To start, we have to clarify what it means to be feeless. This does not denote that it is free to transact with the Hive blockchain. There is a cost. It is something that is derived from the staking of the main coin (called Hive Power). When one has this, resource credits, a back end quantifying system, are utilized. The key is that what is used recharges over time.

What this means is that transacting on Hive is an investment, not an expense.

Unlike other chains, where a transaction fee is deducted from one's wallet, the opposite happens on Hive. No money is taken from ones wallet. The resource credits are decreased after each transaction, before recharging as use subsides.

Transaction fees are a way of life in the finance world. They are not, however, apart of social media. The idea of one spending even a cent or two on an upvote is absurd. Elon Musk was vilified for charging $8 a month for a check. For heavy users, though, that might result in only a couple cents per tweet.

Yet people are showing the are not keen on paying that. And it is understandable.

With Hive, we have a decentralized database that one can access through a number of front end, none of which carry fees to transaction. Upvotes, articles, comments, and sending of money to others is all covered under one's holding of Hive Power. With the most recent hard fork, the ability to delegate resource credits was implemented. This means that applications can offer engagement on-chain even if the individual doesn't have any Hive Power to start.

Social media, no matter how appealing the platform, will not survive if there are transactions fees. At the same time, social media will not be decentralized if it is offered free on a centralized server system like Twitter.

The fact that all base layer financial activities fall under the same system is a bonus.

This is a new feature to Hive, as a result of hard fork 26, and one that is really underrated.

Not only does Hive has fast transactions with 3 second blocks, the settlement is unheard of in the financial world. When put up against any system, we can see how Hive is far advanced.

What is one block irreversibility? Basically, this means that most Hive transactions are settled, i.e. cannot be reversed, within one block. Have you ever conducted a Bitcoin transaction and it takes hours, only to fail? Even on Polygon we can get failed transactions that take 30-45 seconds.

This does not sound like a lot of time. However, if one is conducting a commercial transactions, such as purchasing something, that time is like a lifetime. For example, sites often do not allow downloads to start until payment is fully confirmed. In most cases, this is validation from Visa or Paypal. With cryptocurrency, application developers are going to construct it so the transaction is confirmed before release.

How would you like to wait a day for a download paid with Bitcoin only to have the transaction fail? Most are not going to do this. Even going a minute or two is not feasible.

The idea of offering a solution that is slower than the existing financial system does not make sense. This is not what cryptocurrency is about. We are suppose to advance things through technology, not reverse them.

With Hive, we are looking at a few hundred milliseconds, in almost all cases, for the transaction to fully settle. That means a merchant knows within a maximum of 3+ seconds if his or her money is there. Once the block is irreversible, the transaction is not reversible.

The Foundation For Web 3.0

One again, reverting back to Elon Musk's plans, he said that content creators on Twitter should be compensated. This is a novel idea and something that Hive was doing from the start. Musk once asked where is Web 3.0? The reason he did that is because he simply refused to seek it out.

The answer to Web 3.0 is Hive. This is going to be the foundation for the reasons outlined in this article. The abovementioned features are not only unique, but also required for the new direction of the Internet. At present, few systems are offering this.

Many are talking about Web 3.0 yet few are doing anything about it. When we realize the combination of social media and finance is the future, we can see how Hive is the ideal. Centralized entities are not Web 3.0. The ones that might be decentralized, they lack the ability to operate in a manner that is conducive to providing users what they are accustomed.

The key is to keep looking around and seeing what else is out there. If we know that social media and finance are merging together, who is pulling it off in a decentralized manner?

If not Hive, then who?

Something to think about.

Hive has powered Web3 far beyond what I imagined. With so many community-driven projects, layer two tokens and strong drive for decentralization, I believe Hive has a strong future. We can all be part of this success story

We can all be part of this success story

This is paramount and you nailed it. Hive is going to require all to participate.

Exciting times. Am doing the little I can to build my portfolio - carefully though - in this market downtime. The bull market will definitely come someday

That is the best approach in my opinion. Keep building through the bear. That makes the bull that much sweeter.

Is one block irreversibility secure? Isn’t the purpose of multi-blocks confirmation to increase the probability that the transaction is legit and achieved consensus among all miners and validators?

I don’t know the technical side of this for HIVE, does it mean only 1 witness is needed to finalize the block, or every block is confirmed by all witnesses?

Transaction becomes irreversible when it is included in a block that is then confirmed by enough different witnesses. Once the node observes enough proper confirmations, it drops related undo session, so there is no way for it to revert to different fork, even if it wanted to.

Before OBI the only way for a witness to confirm a block was to wait for their turn to produce and build a block on top of previous one - that counted as confirmation of all the blocks below new block. For this reason irreversibility only triggered after at least 15 blocks, which is 45 seconds (sometimes more if the chain of blocks contained schedule switch). OBI just created a shortcut - an alternative way of confirming a block (the old way still works). It is done with special transactions that are just not put in the blocks. These transactions still need to be properly signed and only count if the witnesses that sent them are elected for future schedule.

Hive is everything social media because is scalable, fast and the best option which feeless and sometimes we do not know how great this is. Imagine a feeless world with fast confirmation

Yes and this adds in when talking about finance.

We are going to see a massive expansion over the next year. A new social media app going to be released on Monday.

Hive is just it!!! The earlier people know the better ! The sweet thing is it belongs to no one , just tap in and invest with your own contents and other platforms you can tap in from on hive !!

My only gripe is that they need a better system for cross-token/cross-chain compatibility. I had a SWAP.LTC withdrawal take almost 26 hours, and for Litecoin that is forever.

The problem is that Elon or someone else doesn't have control. So they obviously won't like Hive. However, if we can build the applications and get people to use it, they can't do anything about it.

The answer to Web 3.0 is Hive. This is going to be the foundation for the reasons outlined in this article. The abovementioned features are not only unique, but also required for the new direction of the Internet. At present, few systems are offering this.

I have gotten useful information from this educative post. Is not only that hive is web3.0. is is offering what web3.0 should offer even more than.