By now most have heard the news about Maker DAO allocating $500 million to invest in US Treasuries in an effort to stabilize the backing of the token. Here we see an asset backed (ABS) stablecoin that is using a reserve to derive its value.

This is a similar path that Circle is taking with USDC. Of course, this is in keeping with the wishes of the regulators, notably in the United States. Many, especially members of Congress, only feel stability comes from having a currency backed with reserves. It is interesting though, that they do not feel that way about the USD, although that is backed by the economic productivity that is generates.

The last part is a vital component to this discussion.

Maker is taking an obvious path. Many seem to think that this is the way to have value to a currency. We saw a similar situation with UST, when there was a decision to partially back the token with Bitcoin. As we know, that failed miserably.

At the same time, many are excited about the idea of backing a currency with gold. Unfortunately, they buy into the gold standard myth. Commodity backed currency never fared well and it never was a dominant medium of exchange.

Here is where clearly understanding monetary history along with what is truly taking place is vital. With the Hive Backed Dollar, we have a tremendous opportunity to construct a very powerful stablecoin. This will take a lot of work and not is going to be accomplished by simply announcing some reserves.

As we saw, that tends to be a fool's errand.

To start, we have to point out that HBD is backed. The name says it all. It is the Hive Backed Dollar. Thus, each HBD is backed by one dollar worth of Hive. Notice how it is not backed by USD or cash equivalents, unlike what Maker is doing.

HBD is backed by HIVE.

The question is how much. At present, this is what Coingecko lists the market capitalization of Hive at: 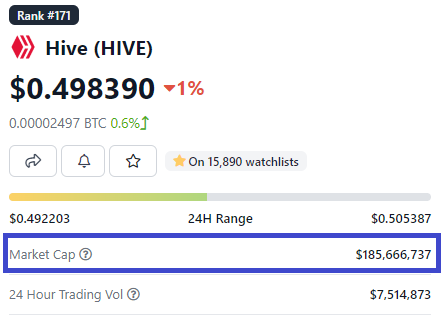 As we can see, there is $185 million to back the circulating HBD. Of course, this is not totally accurate but more on that in a moment.

Hiveblocks has the supply of HBD at 27.5 million.

From there, we have to subtract the HBD that is locked in the Decentralized Hive Fund, which brings the total to 9.1 million.

Here we see that 9.1 million HBD is backed $185 million worth of Hive. Unfortunately, that is not correct since there is a 10% haircut rule which means when the HBD USD value surpasses 10% of the market cap of HIVE, then the production of HBD is stopped until the ratio drops.

Therefore, we have $18.5 million HIVE backed the 9.1 million HBD. At present, we effectively have $2 worth of HIVE backing each HBD.

One important note is Hard Fork 26 will change this haircut ratio to 30%.

The challenge that most take with the entire discussion is they overlook value. Much of this likely stems from the misbelief that the USD derives its value from oil, the US Government, or some other abstract source that has been proven historically to be inaccurate.

What gives the USD its value is two-fold:

Both of these equate to trillions in financial activity occurring via USD. When we add in derivatives, we are looking at hundreds of trillions of dollars. That far outpaces the next closest currency, the EURO.

One key point is we never see the discussion around stablecoins mention the idea of value. With Maker, it is saying that DAI is not a currency. Instead, it is a derivative, meaning it derives its value from some other underlying asset. In this case, it is a balance sheet of USD and cash equivalents.

This works since US Treasuries are in high demand since they are the only form of high quality collateral to the international banking system. However, this is not the path that HBD needs to take.

Under this scenario, we have two separate coins to focus upon.

The two coins on Hive have an interesting correlation. Due to the conversion mechanism, which allows HBD to change into HIVE, there is a value proposition that can be transferred between the two coins. It is also something that should be separated when it comes to our focus.

As stated Maker is turning DAI into a derivative. The focus is not in building value in the currency as much as getting the proper backing. With HBD, the first task is to concentrate our efforts on pushing value to HBD itself.

How is this accomplished. By building out these areas:

If you will notice, in each of these areas, the USD is overwhelmingly the dominant currency. This is how value is pushed to a currency.

Concentrating efforts to build out a platform that places HBD at the core of all transactions is imperative. Here is where we see the separation from the approaches taken elsewhere in the stablecoin market.

This moves us to the second part of the equation: HIVE.

At the same time, we need to put effort into the building the value of HIVE. Notice it says value and not market price although that is important in this instance. We want to have the backing agent to have as much value as we can.

Here we see the utility of HIVE enter. What features does it presently have?

One of the keys going forward will be to generate a return for those staking the coin. In other words, it is incentivizing people to pull HIVE off the liquid market and stake it. This will likely have the impact of price appreciation on the market due to a reduced supply.

With utility, this becomes a reasonable possibility.

Routing back to HBD, now we can see how the value of the backing is increased, making the stablecoin even stronger. The idea is to concentrate on HBD as if it was a standalone currency while also addressing the value of the coin that is tied to it.

Under this scenario, we see how the correlation between the two is strengthened as the value of each is leveraged against the other.

This simply is not being done in cryptocurrency. Maker is going to a safe haven by turning to US Treasuries. As we covered, due to a shortage of collateral, the banks are desperate for these securities. Hence, this move is very safe.

It does not, however, add much value to the overall equation. The idea of making HIVE, through the features, utility, and return, a coin that is very desirable changes the everything. While there is no reserve fund, the conversion mechanism has the market backing the stablecoin.

Here we see true market driven elasticity based upon demand. If there is a need for more HBD, the market simply creates more via the conversion mechanism. This reduces the supply of HIVE, a move that simply transfers the market value of the HIVE converted over to the HBD side. Naturally, converting the other way has the same effect but in reverse.

This is the point that nobody is talking about. We see more monkeying around instead of trying to build value through utility. It is a mistake the entire industry keeps making.

Stablecoins have a tremendous future but only when we begin to approach those areas that will provide inherent value in the coin.

HBD can truly stand out from the rest since most are really looking to create a derivative, not a currency.

So, Maker DAO's response to the coming bill to ban algo-stablecoins is to buy US Treasuries... Let's all hold hands under one sun (and not called justin).

You are absolutely correct. HIVE and HBD value creation needs to be both-and not either-or.

There has been lots of value-creation on the HIVE side, but not much on the HBD side. It would be good to see some DHF proposals focused on creating value with and for HBD.

@brianoflondon’s v4v and lightning bridge is an excellent start. We should be actively building on that and expanding the reality of content creators worldwide getting paid directly from their consumers in HBD micro payments.

It seems like more than one of the things they are putting into the next hardfork are good steps forward on some of the things you mentioned here. The revamped RC system should help increase the value of Hive right?

Thanks for upadating us. Yesterday a friend of mine paid for food with BUSDs, I dream of going grocery shopping and pay with HBDs