There is a great deal of discussion about the Metaverse. It is amazing how quickly something gets picked up and how people run with things. This is something that few were mentioning even a few months ago. Now it is the buzzword that is being tossed around.

We need to realize the Metaverse is going to be developed. This is something that is going to be a part of humanity's future. It is also not "just around the corner".

In other words, this is going to be a long process.

Nevertheless, that does not stop people from touting the idea. So let us separate some fact from fiction.

Technology seems to have hype cycles. A large part of this can be attributed to the media although they are not the sole instigators of it. We see many entities involved, all who promote ideas before their time.

What is the technology hype cycle?

This is a concept that was put forth by Gartner™. In fact, it is called the Gartner Hype Cycle by many. Here is a basic chart of what it looks like. 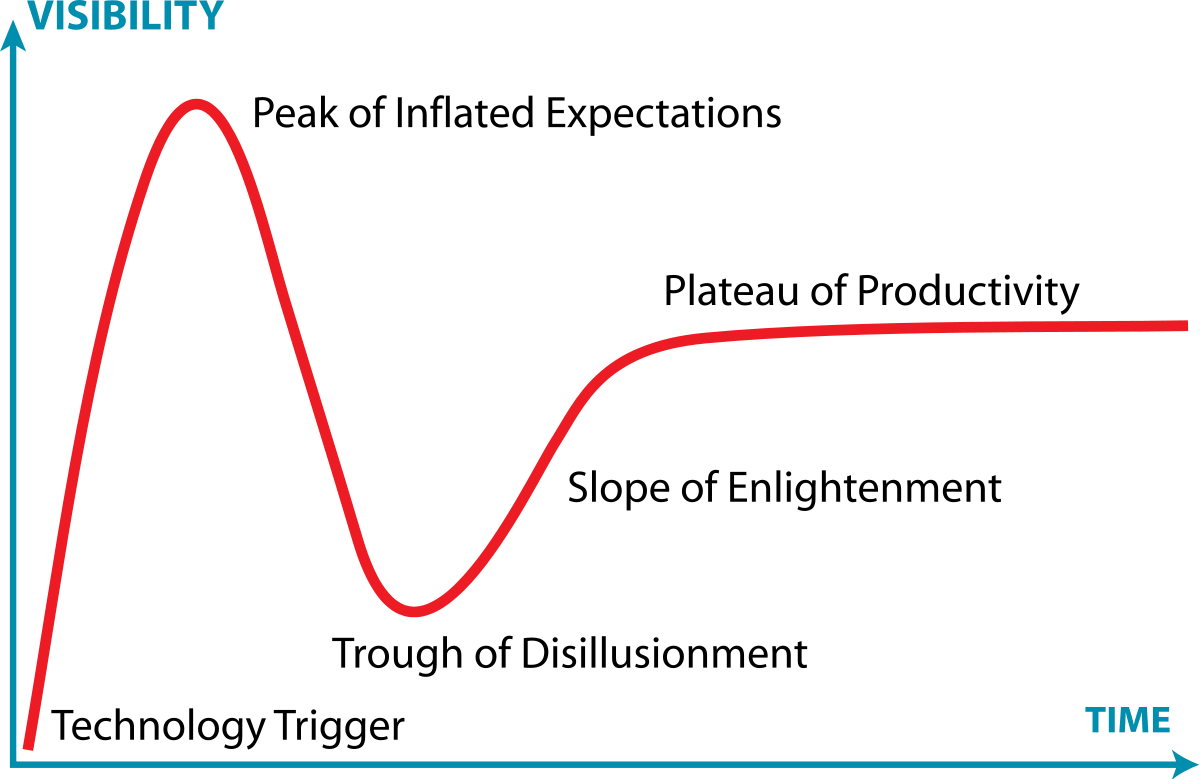 The idea is that most technology fits onto the chart somewhere. There are a few that are able to avoid this. The smartphone went from being introduced to large scale success in a short period of time. There was little build up and the pace of adoption was so quick that it avoided the second and third phases.

Nevertheless, most are not able to do that. With how things are going, we are likely to see the Metaverse idea also suffer the fate this chart outlines.

We know things are getting out of hand when people are starting to discuss how to invest in the technology. Of course, everyone wants to get in early so we see the talking heads jumping on the bandwagon.

Here is a video of someone doing just that. He is going to tell people how to invest in the Metaverse.

This is where the inflated expectations begin. It also reminds me of when Snap, Inc went public and the financial shows were saying how that stock was a way to play the explosion of Augmented Reality. A number of years later, we are still awaiting that explosion.

What The Metaverse Is Not

To really get a grasp of what is going on, we need to understand what the Metaverse is.

Perhaps a way to approach it is by looking at what it is not.

The Metaverse is not:

None of this captures what the Metaverse will be. Instead, all of those are parts of the Metaverse. Many of them are the foundation upon which this will be built. Calling those the Metaverse is akin to saying your television, car, or a particular country is the world.

What Is The Metaverse?

There is no clear definition of this as of yet. The reason is that it is so encompassing we cannot truly imagine how it will be. As stated, a film like Ready Player One only captures a part of what we will be dealing with.

This is like the early days of the Internet. While a few were glaring far off into the future, most did not see the emergence of social media, mobile, and a host of other features we take for granted today. The evolutionary nature of a complex system like this took us in directions we could not imagine.

Our path towards the Metaverse will do the same. There will be no particular day when it "flips on". In other words, there is not a pre and post-Metaverse date. What we will see is a continual move in that direction.

What is a challenge, and why the hype cycle is quickly becoming evident, is this process will take decades to unfold. Of course, during that time, parts are coming online and new iterations of the Internet will appear. However, for the reality of the Metaverse to form, it requires a lot of time and development.

A big part of the problem is that, to power this, we need an incredible amount of processing capability. It is a level far greater than we have available to us now. We also need to see major increases in our communication systems. The latency we presently see is nowhere near valid for a world that we are describing. A technology like edge computing needs to be implemented to be able to handle that issue, something that is only just starting to be explored.

Ultimately, the definition of the Metaverse will be subjective. Just like if you ask people what is our world, you will get a lot of different answers, the same will hold true for the Metaverse. Each individual will have his or her own view about it.

Investing In The Foundation

If there is something to promote it is the idea that the Metaverse is being constructed. Because of this, we are able to invest in the pieces of the foundation upon which more will be built.

This is no different than the Internet. In the early days, a company like Cisco was doing a lot to provide the "plumbing" for the Internet. That is a company that is still around today. On the other hand, WebVan did not stand the test of time.

We often discuss blockchain and cryptocurrency. As a segment, this is important since it will provide ownership and transactional ability for the Metaverse. Naturally, this does not mean everything is going to succeed. One must be very judicial with what is speculated upon. There are a lot of dogs out there.

The same holds true for some of the other items on the list above. For example, Virtual Reality is entering its 3rd hype cycle. The last one came when Facebook bought Oculus. It was presumed then that the technology was finally going to take off. As we know, it did not.

Is this time for real? It appears so but who knows. For that reason, caution is warranted. Nevertheless, it is important to not confuse VR with the Metaverse. A speculative play on VR is just that. It has nothing to do with the long-term outlook over the Metaverse although it is likely a piece of the puzzle.

Ultimately, the Metaverse is going to be a convergence of many different technologies coming together. The challenge with trying to invest in the Metaverse is we are dealing in the abstract. Even if we are sure it will happen, it is still very unclear.

We are going to consistently be moving towards a more virtual world. There are many technologies that will have a hand in this. If one is looking to jumpstart things, getting involved at that level is an intelligent thing. However, do not do so because it is a Metaverse play.

Anything that is being touted as that is likely to end up falling victim to being overhyped. Nevertheless, there are solid projects that will be part of the evolution forward and being involved with this is not a bad idea.

There are going to be a lot of winning technologies that end up incorporated into the Metaverse. It appears, based upon where we are now, the bet is on the foundation since that is what is being developed.

We are still a long way from Ready Player One* even being possible.

For other articles about the Metaverse:

I still don't understand what is the metaverse, but I'm glad to read that it isn't Fortnight! ;D

We are the foundation of the metaverse. Everything that’ll be incorporated into the metaverse are things we already use now, this is particular to crypto users

At least in part. We are laying the foundation for a lot more to come.

Blockchain is going to be a big part of it as the record keeping system. NFTs will denote ownership of different assets, both physical and digital. Fungible tokens will be used for transactions and for settlements.

I'd have to agree with a lot of this. As much as you hear Metaverse thrown around these days as a buzzword, it is still quite a ways off. I have kind of hand that impression for a while now. It just kind of feels like something the majority of us aren't ready for yet. Both on a technical level and a mental level.

Yeah you can guess that with how loosely the word gets tossed around by the media. And then we see a ton of YouTube videos with it in the title.

A few months ago, the only videos tied to metaverse were interviews with the CEO of Epic games and people like that.

And you, you were talking about the Metaverse back then too :)

Do you want to invest, create, earn , build ,lifestyle then need to think beyond (Meta) to the universe ( Verse)----> Metaverse.
Buy your plot in Chicago ,NewYork on Upland using EOS blockchain or Buy on Decentraland.
If you art creator or investor then Don't let Beeple to sell their Design in millions because you can create something more unique and eye catching artwork and sell it if you want on NFT , opensea even at NFT Showroom.
If you want somebody attend virtual meeting with you then simply create your character and let it attend your virtual meeting on blockchain where everything is hashed with timestamped .

There are many more exposure coming ...who knows one day humans only communicate with all the metaverse resources on the internet.

your article is very helpful and valuable ..love it.

The potential is near unlimited and going to access all aspects of humanity. We are going to see a lot of creativity and innovation spring out of all this.

I've heard quite a lot about metaverse but nothing really definite as you've actually stated what it isn't. It's a concept that would become more clearer just as everyday people are beginning to unravel the mysteries of decentralisation, crypto and blockchain technology.

It is like in the 1990s...people were asking what the Internet is.

Today, nobody asks that although you might get a ton of different answers if you did ask people. The bottom line is people use the Internet and do not think about what it is.

The same will be true of the Metaverse when it does roll out. Before then, we can look forward to things such as VR games and Web 3.0.

Exactly, there's so much more we need to look forward to. I mean, people coming to later know what the internet was, happened inardvetently, I'm guessing slowly the integration will slowly happen with metaverse.

I find it difficult when there isn't any good way to describe the metaverse. Is there a distinct difference between web 3.0 and the metaverse?

Congratulations @taskmaster4450! You have completed the following achievement on the Hive blockchain and have been rewarded with new badge(s) :

You made a video about this a while back. Since then I've come to understand The Metaverse as everything interconected: internet, IoT, telecomunications, Alexa, Biometrics.... everything in the Universe interconnected. We're now seeing the very early stages, but that's sort of what I imagine The Metaverse will be one day.

I have been seeing the first graph everywhere, every time.

The metaverse will be what the people decide it should be. Like blockchain it will encompass various communities and virtual worlds. Now hopefully we don’t get Facebook’s version which is more like a centralized virtual prison. A prison with various game masters looking to syphon value or censor what’s unpopular. :)

We're all in the Metaverse.