The other day I wrote an article about Leofinance doing its part to build out the value of pHBD. This is a very important concept that most in the crypto world are overlooking.

In that article we noted how a new liquidity pool was opened up. It had pHBD paired with $POLYCUB. This was another step in the right direction.

The goal for Leofinance is to built as much value for pHBD as possible. Too many want to monkey around with the tokenomics, instead of building out real value for a currency. Much of this was written about in other articles so there is not going to be delving too deep.

However, there is another factor in all this: the impact upon HBD. In spite of the recent pump, we need to focus our efforts on HBD's value. pHBD is one way to do that. Since it is a derivative, the more inherent value that holds, the better it is for HBD. So having a few liquidity pools is a good beginning.

We now are embarking upon another leg in the journey.

Anyone who was paying attention to any of the AMAs over the last 6 months should not be surprised with today's move. How many times were we told that what is developed for Polycub will be added to Cubfinance? Yet in spite of that, too many were still fretting about the latter.

Well, we can see the first steps in fulfilling that were taken. There were three new farms opened up. Anyone care to guess what they have in common? 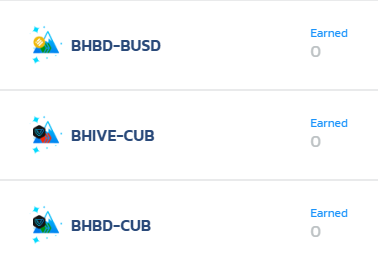 As we can see, there are new derivatives on BSC for the Hive coins. Two of the pools, like the pHBD counterpart, are bHBD. This is now another for of HBD, yet on another chain.

Here we see the first step in, not only the duplication of Polycub on Cubfinance, but also the expansion of potential value for HBD.

Much like the article linked above, the goal is to now add as much value to bHBD as possible. This will come from the development of other features tied to this token. Ultimately, we need a system which creates derivatives off this token. Essentially, we are looking at changing the form of bHBD just like when water is frozen, it turns into ice. It is still water, just in a different state.

By expanding the "states" of bHBD, we can drive value to that the same way with pHBD.

There are now 4 liquidity pools tied to HBD. We have two utilizing pHBD with the same for bHBD. While these are not filled up, that is not the major issue at this moment. The key is they exist. More importantly, the follow up is crucial.

When dealing with a currency, there are a number of things that are required. This is missing within the cryptocurrency, probably why things are stalled out a bit.

Obviously, when it comes to HBD, we can see the shortcomings in all areas. However, Leofinance is starting to approach some of these.

We can see how there is infrastructure being built. The LeoBridge is part of the infrastructure that is need for HBD to enjoy cross-chain reach. It is also helping with the depth and liquidity, albeit slowly.

One of the next phases is to attack the idea of sophistication. What does this mean with currency? If we look at the reverse, perhaps that will explain it. We can think of the antonym as being crude. Thus, we need to move HBD and these derivatives away from being crude.

That is another think lacking in the stablecoin world. Most are just crude copies of each other. We have to evolve beyond that.

Here is where moving into Polycub Bonds (as well as Cub Bonds) is another step forward. From there, we can move into exchanges catering to the fixed income market. After that, we can build other assets with specific financial purposes such as risk hedging.

Of course, the process has to start somewhere.

Ultimately, we want to focus upon four other key areas:

Here is the essence of building utility for a currency. With the Leofinance family of HBD that is obviously coming out, it is vital that we keep looking at the bigger picture.

There is a huge opportunity with what is being built. That is what bears are all about.

In the end, Leofinance can build a number of financial supercenters that offer many different DeFi options.

I'm not sure what it is but I took action faster on Cub Defi on BSC for HBD and Hive faster than I did on Polycub. Huge potential on both platforms and I hope to be adding more there very soon!

The additional pools really do add an interesting layer to what we have so far. As they fill up, we can see how there is another arbitrage opportunity. This will help to keep things in alignment a bit more.

Also it can enhance the liquidity some if more HBD, in total is added. I fear it will just take from Polycub and move to Cubfinannce.

But at least the pools are there, a start.

Very nicely done, and executing on announced plans, as usual.

This is very interesting! I suppose the bear market is here so we can build, as you point out.

I'm one of those not paying too much attention to what they're doing ... my fault. I'll have to get back to look at LeoFinance development much more.

A lot going on all over the place, both on Hive and around the world. Hard to concentrate on it all.

Mostly because of timezone privilege, I got to sell quite a few HBD during the pump. At first I bought Hive on the internal market for down around .30 and then I looked at Polycub and tried hard to supress my nausea and "fear of ETH"™ in order to use the pHBD / USDC liquidity pool.

Somehow I managed to turn around 800 HBD into 2000 USDC via Sushi swap. I'm not sure I completely believe this is real yet, but when the price comes back down to $1 I think I'm going to add some liquidity to that pool with my new USDC and see what happens.

As I understand it now, if you have liquidity in the pool and the Koreans do their pump thing, all you have to do is unstake and you'll end up making money?

Whatever it is, pHBD vs USDC is by far the most liquid market I can easily access.

What I'd really like to know is if there is a DeFi way without a centralised exchange of getting BTC out of the whole Polygon system?

Yes that is the opportunity. Being involved in the Polycub (and now cubfinance) liquidity pool allows for the dumping of pHBD in that instance for USDC. You will get more USDC for your phBD.

Then things return to normal, you can alter it.

So it is an opportunity to make a nice return if you time it right.

I think the opportunity is there and having more options is better than less. However, I wonder if there will be enough liquidity in each of these pools if more of them come out.

Well the pools are one thing but filling them is another.

But we have to start somewhere.

derivative Of a derivative of a garbage USD that is mass printed and will crash later this decade. Sounds great 🙃

USD that is mass printed

This alone shows you have no idea how the monetary system works or how USD is even created.

Put ur money where ur mouth is? Friendly bet? Locked up on a smart contract

How long the process would take is hard to determine. It is all going to depend upon the utility and network effects. Obviously, the more people using it and the more use cases, the greater the resiliency.

To me, in addition to people starting to establish payments with it, I think we should see this:

We already have a Polygon and BSC version of HBD from Leofinance. That means anyone can build on those chains and incorporate them in.

At this point, other than getting into the liquidity pools, there isnt much use case for HBD (or the derivatives of it).

Leo team is doing an amazing job for hbd giving it a little bit of value every day, I know a lot of work is needed to be done but it requires process

The trading volume will slowly fill up the pools as there are liquidity providers that just "set it and forget it". They only collect the Cub / Polycub and let their LP fees accumulate.
It would be amazing to see HBD have more pairs on both polygon and BSC but I doubt it would have any meaningful volume... Not that many hivers adventuring into other blockchains, it is quite clear by the lack of liquidity on Polycub.