Report: EVs TCO Less Than ICE - This Is How Disruption Occurs

Before going into this, we have to cover a disclaimer. I have not read through the entire report nor do I delve into the outfit that put it out. With "studies" like these, they often can be slanted to a particular outcome.

That said, even if that is the case, which I have no idea if it is, we are going to see this outcome at some point soon. Imagine a time when Electric Vehicles (EVs) are less expensive than gas or diesel vehicles. While some are making the claim of parity, it is not here yet.

There are a couple factors:

Hence, we have the situation where the upfront cost of an EV is still a fair bit higher than a comparable gas vehicle. That means buyers are paying a premium to drive an EV.

Fortunately, this situation is being worked upon. On the production front, scaling is taking place. The leader, Tesla, is about to bring on two huge factories that will likely quadruple their max output capacity. At the same time, they are spending $140 million to build out another line in their China facility.

Not to be overlooked is the fact that the legacy automakers are looking at dumping tens of billions (each) into the conversion/building of factories for EV production. In other words, this shortage of vehicles will abate over the next half decade.

The second factor was established more than a decade ago and is still in play. Here is a chart about the cost of Lithium batteries. 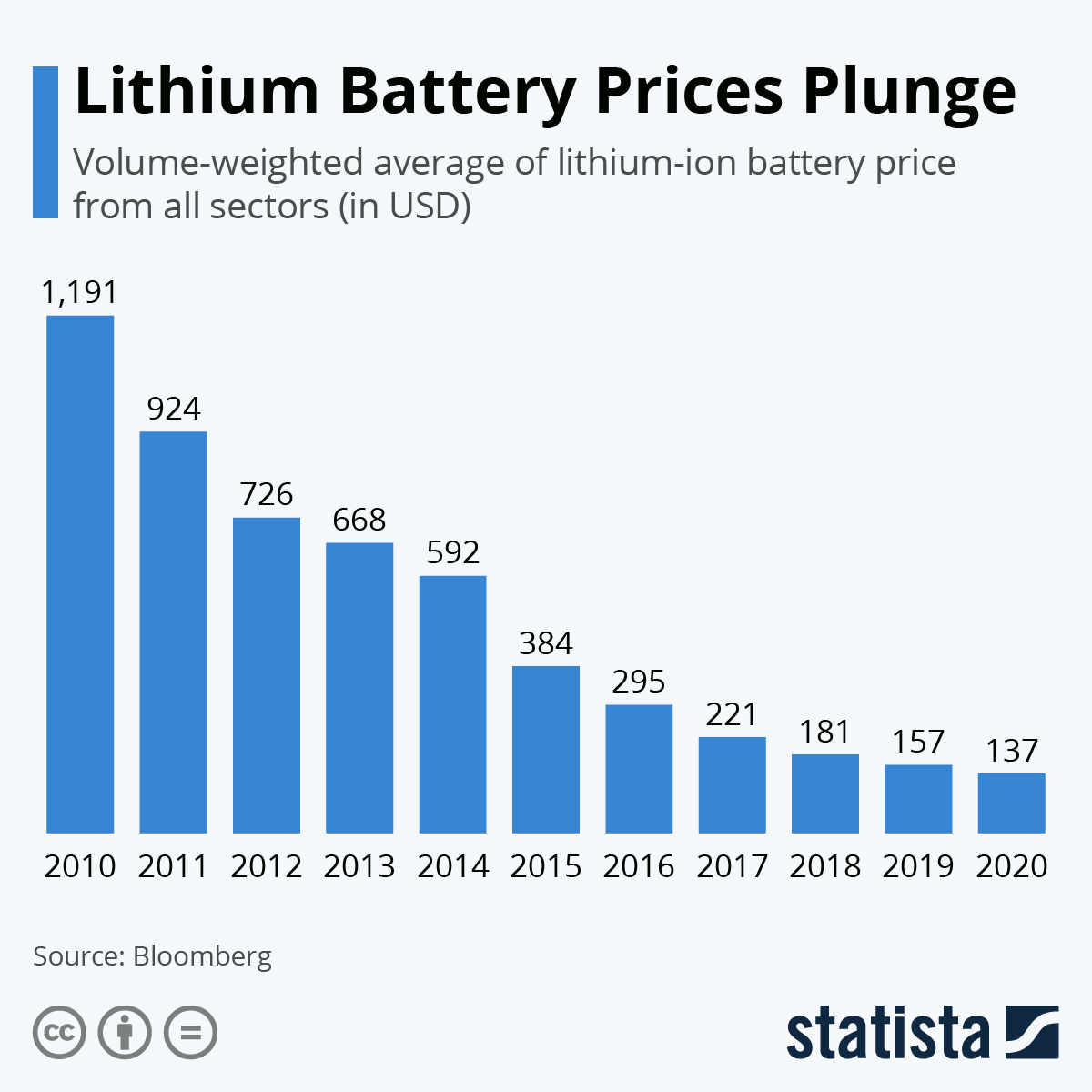 Supply chain shortages could cause a bump over the next year or two as companies adjust. Of course, there is a push to transition to more cost effective batteries with come makers looking at LFP batteries.

Here we have some conjecture but there is no reason why battery prices should not continue heading down over the next half decade. There is incentive all around to achieve this end. For this reason, we can expect the purchase price of EVs to drop lower than their ICE counterparts in the next few years.

This is an area that many are asserting that EVs are already cheaper. When look at total cost of ownership, purchase price is only one factor. The rest of the cost associated with the vehicle's operation over the life of the car is factored in.

Analysis from Atlas Public Policy says that we are seeing the TCO of EVs coming in lower than many popular ICE vehicles.

While not knowing how accurate this is, it makes sense. Most vehicles require gas, oil changes, and assorted maintenance. Much of this is eliminated with EVs. Naturally, there is no gas or oil although it does require charging. Here we can see the potential for manipulation so we have to be careful. Plus we tend to see a wide range in electricity pricing (although the same is true of gas prices) depending upon the area.

What we do know is EVs require a lot less maintenance. In fact, this is one of the reasons people believe car dealers are not pushing them. After sale service revenue is enormous for these companies. These are not in any great rush to give that up.

Nevertheless, regardless of whether this is true at this moment, it will take place in the next couple years. While price parity on the purchase might be a bit further down the road, TCO is much nearer. Even a 10% reduction in purchase price due to battery costs decreasing could have a big impact.

Ultimately, this is how an industry gets obliterated. While it is still the automotive industry, it is completely changing. Just ask Nokia how the mobile phone industry changed once Apple entered. This could be happening to some of the legacy automakers.

The next 10 years will see a radical transformation in the automobile industry. We are going to see a large percentage of the cars on the road becoming electric. This is a certainty.

What impact that has on the different players in the industry remains to be seen. We have a front row seat at watching what carnage is going to be created.

I can't say I found it informative as much as interesting. There are all kinds of ways to change the fuel type of a vehicle. I'm hoping for solar powered vehicles.
It is entirely plausible if it has a battery to hold energy captured by the solar panels. I have not given much thought beyond that. 😁
!PIZZA !hivebits

@wanderingmoon(1/1) You mined .9 HBIT and the user you replied to received .1 HBIT on your behalf. You can receive 100% of the HBIT by replying to one of your own posts or comments. Or, support Hivebits by using the official HBIT mine | your wallet | market | tools | connect | <><

Going to have to drastically improve the conversion rate on solar to achieve that.

And how do you power your car in areas where the sun doesnt shine?

That is the challenge with solar. People believe it is viable everywhere. It is not. There are regions that are designed for it but to have a solar powered car in an area like Seattle where it rains for days on end would be catastrophic.

how everything in life we ​​are transforming the car market is very competitive but I think that electric cars are the future and these companies should start working on them, there is so much new to see in the coming years so many innovations.

It is the future because that is what the manufacturers are all moving towards building. If they started to build cars built on nuclear power, that would be what the future would be.

The industry, for now, settled on electric. We will see if that changes in the future.

Besides the oil changes, I think EVs still have similar maintenance issues right? At least I still think all parts will wear out over time and also based on the miles drived.

The number of parts in an EV versus an ICE is radically smaller. There is not much to an EV engine compared to ICE.

In EV initial Investment is more than average, but in long term it is the most profitable option.
Main problem here is charging cause it's not available everywhere, so EV's are mostly suitable for short distance rides

EV stations are being built out. When ICE vehicles were first introduced a century+ ago, there werent a ton of gas stations. They were built over time.

Plus the difference is an EV can be charged at home whereas one cannot fill up his/her car at home.

I am glad you highlighted the after sales as in servicing being the main profit centers for car dealerships. This is the one advantage EV's have over gas/diesel vehicles. Unfortunately many countries are nowhere near having the extra electricity required for EV's to take off like it should.

This will not be popular but we are cranking out automobiles so fast it is ridiculous. Why is no one concerned with the Global Waste Management Crisis?
We want to discontinue the ICE because of dependency on fossil fuels and emissions. Really most states in this country either burn oil or coal to generate electricity. Unless we are powering these EV with wind, hydro, or solar power we are still dependent on fossil fuels. I do not see the point.