Today was a monumental day for both Hive and Leofinance. The release of microblogging on the blockchain is something that was a long time in the making. This is an intimate subject to me since @leomarkettalk was designed to be a precursor to what was to come.

Unfortunately, we never foresaw it taking two years. How do I know this is the case? 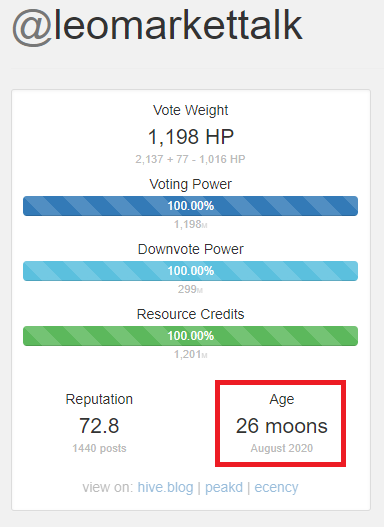 We can see the date the account was set up. This process started in August 2020.

Here we sit now, with it being August 2022, and Twitter on the Blockchain is a thing even if it is in the MVP form.

For that reason, it is time for all of us to support #LeoThreads.

What Is The Future Of Leomarkettalk?

This we cannot answer. For the moment, it is going to be shelved. This was designed to be an account for the community and it will remain so. If we can figure out a use case for it, we will revive it.

At this moment, there is little point continuing the post each day. We need to reserve our efforts for #LeoThreads and getting the numbers up there. It is a major breakthrough for Hive and all lions should provide a show of force.

Leomarkettalk is shelved, it is not dead. There are some ongoing operations.

We will continue to support the LPUD initiative headed by @anomadsoul. The delegation will be provided each month as part of the rewards.

There is also the matter of being a liquidity provider on Polycub. This will continue. The remaining assets will be moved over (HIVE and HBD) and deposited. All POLYCUB paid out will be held until the price improves. After that, it will be flipped for pHBD-USDC and placed into the LP.

As we stared from the start, the liquidity there is permanent. There is no reason to take it out. We are looking to help in whatever ways we can.

LeoThreads Is A Game Changer

Many of us knew the potential was there with #LeoThreads. It is a game changer not only for Leofinance but all of Hive. This is a true Web 3.0 application, one that fits many users. The majority of people on the Internet prefer short form content.

Twitter because the size it did because it found a need. Leofinance is doing something similar. It is true we are only on the first day and the release was a MVP, but we do know the roadmap.

All of this is a precursor to #ProjectBlank. That is going to be a standalone application which truly will give the Twitter experience. Before we get to that point, the infrastructure needs testing. As earlier showed, there is a big need for scaling of Leo Lightning.

The opportunity is to increase all the numbers on Hive. This is very important.

One of the keys that many of us are going to be watching is the reports that come out about the Ad Revenue. Since this is planned on being used to buy LEO and distribute in the form of Leo Power, we all have a vested interest in seeing it increasing.

From what we can understand, this is based upon a number of factors. One of them is pageviews. #LeoThreads is really adding to that.

It is also increasing the "size" of the site rapidly. The number of pages that are created, since each thread is its own page, is enormous. This is going to help Leofinance in the long run.

We are discussing the concept of value. This is the idea behind @leoglossary. That is being developed as an information and resource center. All of it feeds into the same trough: Leofinance.

Building during the bear market is one of the most important concepts there is. Right now, in spite of falling prices, we might have seen one of the biggest breakthroughs in the 2+ years of Hive.

I think it did a great thing for keeping engagement coming and getting people ready for what was to come. It's wild to think it's been two years! It feels so good to get my hands on threads finally though and I'm loving it. Of course a few rough edges and tweaks but a very solid beta launch so far.

Yes it was a tortuous process for many of us. LOL

The fact that #threads was released is terrific. Kind of sad about the ending of @leomarkettalk but it is a primer.

Now the real deal is here, so time to put it to bed, at least for a while.

I think the LMT can continue nontheless, especially it there's a different use case for it but then it seems sharing everything on leothreads seems even more exciting. I don't know, on leothreads is there a limit to seeing only the people you follow on Hive?

We have Leomarkettalk in our back pocket. If a community based use case pops up, it can be revived.

It has been a good initiative, perhaps it could be used to share the most interesting leothreads of the day or week. As a kind of summary.

I am not sure how that would work. That are already thousands of #threads being posted and more to come.

Who is going to sift through all those?

You've done a great job putting out these "container posts" for conversation and participating in it every day.

Yeah well some followed, most did not. They preferred to live on Discord.

Sad, with #threads out, they are still doing the same thing.

Yeah!!! This is a great news!!!! I love doing quick analysis on crypto charts. Analysis with 30-day, 60 or ALL charts. These analyzes I do are very short and I spread them on telegram, but now I will have the opportunity to share them with LeoThread! This in my opinion is a fundamental update. Microblogging on HIVE is useful. Thanks for keep us update

This in my opinion is a fundamental update. Microblogging on HIVE is useful.

It is huge for #hive. I cannot deny that. For those into finance, #threads is a great place to share charts and things of that nature.

It's too bad that there won't be more of it in the future but I do think that it does make sense. With threads, you can put it all on that end. Do you think the system for threads will do a good job of attracting more people?

Do you think the system for threads will do a good job of attracting more people?

Eventually. At this point, we have to attract more people on Hive. That is still a challenge. We have to open it up to more activity.

I think once mobile is available and it is a standalone app, the success rate will be much higher.

I will miss LMT because that is the first thing I always check and has serve me well in terms of information but reason is pretty obvious just to give threads a good chances to engage. Threads is truly a game changer

I hear you. Obviously, I have some mixed emotions, but there is always more to do. Now that I bit off the huge job of @leoglossary, my plate if full.

It is a great thing that #threads is here. We simply have to utilize it to its full potential.

I dont think "game changer" is an understatement when it comes to that.

It's sad to see it gone, because it served a very good purpose, allowing me to quickly get most important crypto-related news and trends. On the other hand, the change is inevitable.

Change is inevitable especially when there was an improvement. We now have something that is better: #threads.

LMT was a great initiative and it served its purpose. Now let's get threading!

It’s sad to see it put on hold. But understandable.
You did a great job TM 😎😊
I so understand the mixed feelings you will have.
Hope we can further support in threads. As it is hard to search through all of the threads… there are and will be many.
Let’s see how it will develop.
Happy weekend all 👋🏻☀️

Oh, the legend retires! LMT changed my life and gave me friends for a lifetime. ❤️

I think we got a new home. Can do the same thing on #leothreads. 🔥

I'd love to see it continue on Threads. Maybe just with a top and then people respond.

End of an era.

Thanks for running it each day Task.

Thanks for running the market talk, what a long wait! I kinda gave up on waiting for Blank but always upvoted LMT because it was a great way for people to meet and engage is you didnt post much like me. My regular Loefinance pages have been wonky so I have backed off a bit. I'm going to check out thteads now so I will see you there.

So this is the answer I have been looking for.