hivefpl play for free and join in the fun and win

It all kicks off tomorrow. English football in the EPL that is, and it also means a chance to have fun and win some prizes!

Play for FREE and join the Hive mini league!

Do you have what it takes to beat Hiverpool from @acidyo?

Summary of what to do

For full details read Hive FPL Update: You can now join the mini league from @hivefpl summarised below:

Step 1 Sign up for Free to Fantasy Premier League
Step 2 Either select your players or auto-pick them, then choose your team, select captain and vice-captain and name your team. You can even choose the team colours for fun.
Step 3 Compete google form for Hive league
Step 4 Click auto link for Hive League or use the league code (ufeacd)
Step 5 Check google spreadsheet that your name is included
Step 6 Join the Hive league discord server

Have Fun and join in with the Banter

Pick a squad of 15 footballers then select your team of 11 and join the Hive FPL mini league.
It is easy, if I can do it anyone can!
Just hit me up if you want to join and need some help! I have selected my premium players based on what I saw in preseason. I saw Kane play against my team Rangers and he was fricking lethal with two world class touches and two goals. Son well he just gets better and better. Son and Kane score and assist each other. When I look at the other top six teams they all have goals spread out the team. For me Son and Kane are the whom I have built my team around.

Alisson of Liverpool will start. I think this will be a solid year for Arsenal, who are managed by an ex Ranger in Arteta, so have picked Ramsdale who with the World Cup coming up will be eager to impress. So they will interchange depending who their teams play.

My two defenders are two of the top from last year namely Cancelo from Man City and Alexander-Arnold from Liverpool. Those two are pretty self-explanatory. Newcastle could be the dark horses this year. With their influx of cash, they seem to have gone under the radar, but I have inlcuded Trippier as my third team defender. He is on set piece and some free kick duty and provided he stays injury free could be a great midpriced defender.

My reserve defenders are Patterson from Everton the young attacking full back signed from Rangers. He should be first choice with Coleman out.
Williams from Notts Forest I chose as he has come from Liverpool with a £17m price tag and should be a first team regular. Forest have made many signings and look to have a good chance to stay up.

I intend playing a 3-5-2 formation so am relying on strong goal scoring midfielders.

Son Spurs My superstar midfielder, a world class player and counting on him to do the business!

Neto Wolves I went with because of his price and set piece prowess.

Zaha Crystal Palace had an awesome preseason with five goals and three assists and is the penalty taker, however Palace have a tough opening four games.
Saka Arsenal 4 goals and 1 assist in preseason and was a great talent last season. With the World Cup he will be eager to impress.

Johnson Nott'm Forest terrorised defences in the Championship last and is young.

Come on ladies, you still have time to join, come join @deraaa and show us men how to do it!
What do you say @b0s @george-dee @olawalium will @deraaa be beating us?

All images and ramblings are from me, the mad Scotsman @TengoLoTodo unless otherwise stated.

Hi @tengolotodo,
Thank you for participating in the #teamuk curated tag. We have upvoted your quality content.
For more information visit our discord https://discord.gg/8CVx2Am

Hey @tengolotodo, here is a little bit of BEER from @pixresteemer for you. Enjoy it!

Let's do this, partner.... Yaaaaaaaaaay. I'm taking a defender out and I want Saka in my midfield. I just joined the league and here is my squad lol 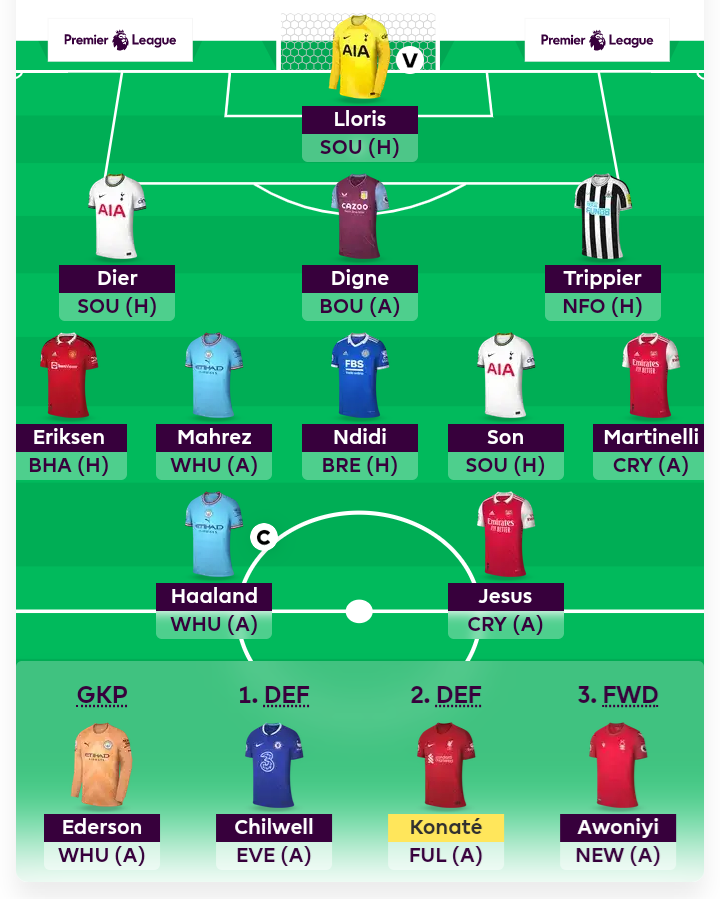 well done!
You are off to a flying start:)

That is awesome, thanks guys!

That sounds fun Tito Ed! I wish you and your whole team the best! Cheers for the win!

jeje well a bit of fun and it is free.
The good thing is the team can be in multiple leagues so I entered the one too!
You can do it to, the computer can do a pick for you, I remember bjmc did that last year in read cash and did pretty well!
Enjoy your wekend CJ:)

That's awesome Tito Ed. I will see if I can try it tomorrow :) Happy Friday to you

That is fantastic , thank you @diyhub and @priyanarc , wishing you a wonderful weekend:)

I can't relate with this one DF but I am hoping for the best for your team.

hehe DF you know you can have a team picked for you by the computer.

Some great picks there and it's nice to see a few players that aren't in many teams (like Zaha who I expect to have a great season). With Alisson in goal, do you think that you'll ever play Ramsdale?

Thanks for that and we will see what happens. Zaha I think he could do well.
Ah interesting point,it might come down to injuries as to when Ramsdale plays.
I actually think the league will be tighter this year,

oh I have a feeling that you will beat me :)

You have got a fantastic team, I can't wait for the season to kick off in a few minutes. You went completely different from what many people have chosen and I believe these men will grind out the needed results for you.

Cheers to a new season @tengolotodo. Here is my team It will be fun and you have a great team too George!

Bro this team killed it, even though you had Zinchenko on bench 😂

Not having Salah, that’s a risky move Ed

hehe did you join Ophelia?
I went for Son, I think Liverpool will be sharing the goals around and he was too pricey for me...

Yeah I just joined
And I get it though, Salah is expensive

yeah he is, but he scored, and I had Mitrovic on the bench🤣

😂 FPL can be frustrating

jaja yes it can. I am glad you joined and keep @deraaa company, I would love one of you two to win:)

That would be amazing!!

Damn right it would ;)

Oh wow, you had Mitrovic on bench 😂😂. Just seeing this now. Great guide.

jaja yeah I thought against Liverpool uff oh well, my gut was right to buy him!