Mark Zuckerberg Has a Human Sister?

It's a bit tongue-in-cheek, but I honestly had no idea... and I certainly didn't know that Randi Zuckerberg has been a Facebook executive this whole time! I wouldn't actually care about any of this, but the bigger picture matters.

And she works directly in the #crypto space now-- for OKCoin-- so it might be a good time to pay closer attention, or to at least realize and acknowledge that she does in fact exist.

Maybe not though... I don't want to exaggerate the scope of what I'm saying. OKCoin is a centralized exchange anyway, so these are places that we expect to be heavily controlled and regulated. But if we zoom out, I really do think there is a cause for concern.

As is detailed in this COIN TELEGRAPH ARTICLE, OKCoin announced that Zuckerberg "will be joining the platform’s brand advisory council in its aim to bring more women into crypto". They are committing a million bucks to this specific cause.

So I'm going to just come out and say that OKCoin specifically is making a huge mistake with this initiative. and they will fail miserably as a result. Playing identity politics and forcing outcomes is not the solution to any problem, and I predict it will fare much worse in the crypto sphere. It's not about women in crypto though-- we all welcome them-- but more about injecting the same woke culture that has been infecting other landscapes, like the film and music industries, into our own ideally decentralized crypto communities.

A flattering PROFILE PIECE over at oxygen.com gives a more complete and succinct picture of Randi Zuckerberg's relative influence:

You may have also missed her recent appointment to the Board of Directors of a little company called Life360. As is described in THIS ARTICLE in Business Wire, "Life360 operates a platform for today’s busy families, bringing them closer together by helping them better know, communicate with and protect the people they care about most."

Corporations Will Always Pander for Profits.

My spidey senses have learned to perk up when I hear idyllic sentiments like this in corporate copywriting... like pure snake oil. And it gets even more slick. "The company’s core offering, the Life360 mobile app," the article continues, "is a market leading app for families, with features that range from communications to driving safety and location sharing."

So this veritable data treasure trove is being piled up for the betterment of families... that's a likely story, isn't it? And now that freak Mark Zuckerberg's sister-- a recent spokesperson for #Facebook, and its former Director of market development (the same Facebook that was caught illegally selling its users' data)-- is on Life360's Board of Directors? Where did she even come from?!

Seriously... I find myself constantly getting surprised by these players at various levels of bureaucracy in different industries-- government, medical, corporate, et cetera-- crawling out from under their rocks all of a sudden and influencing our lives.

I suspect this won't be the last time I talk about these strange types of development... but it just grinds my gears. What's with the corporate shuffle that's happening right now? Resignations, retirements, new appointments... something is afoot. I wish I had answers for you.

The one thing I will say unequivocally: steer clear of #OKCoin.

What do you think? Does this particular appointment bother you, or is it just a flash in the pan? Or maybe you're an OKCoin client with something to say. Let me know in the comments. Thanks so much for reading! :)

Meet the new boss, same as the old boss. You called it already. Just more snake oil for a gullible and trusting public. 😂👍

You got it, @molometer... absolute bullshit loaded into the trough. It's fascinating to watch though, and the number of people lining up to eat is astounding. 🙃

Howdy, you buy a decent amount of Starpro from me on the market. If you let me know how many you need to get, Maybe we can work some mutual benefits.

I grab it as I need it for Rising Star festival bracelets... so it's generally about eight per month. I'm not sure what you mean by mutual benefit though... I'm listening.

5% off market price when HKLBRE is used. Probably not a big saving for the effort.

HKLBRE can be bought at 1 - 1 with HIVE. Only purchase from @huckleberrie Prices on the market are not for your favour.

Looking into the HKLBRE token... I can't quite wrap my head around it yet, but I'm getting there. I still have a hard time comprehending all these tokenomic setups.

It is a small faucet token, People purchase it at 1 HIVE and it sells at 1.05 HIVE.
There is less than 1 K sold for repurchase and the account @Hucklenerrie holds 1250 HIVE to guarantee you get 1 HIVE back

I apologize for dropping off the map for a moment, @thehive... if you still want to sell your STARPRO using HKLBRE, I'll grab four of them off you for the moment. Please remind me how I'm supposed to proceed. Thanks so much. I hope your holidays have been going well. 🙂

It would be a total of about 6 HIVE.
Send 6 HIVE to
huckleberrie
Silverquest will send you the Starpro.

Will cut the middle part of you buy that then use to buy the other.
Ideally you would have HKLBRE for some other reason and use it for a discount or for a % extra later.

Sent. 💸 Sorry for the delay... I didn't expect such a quick response. lol 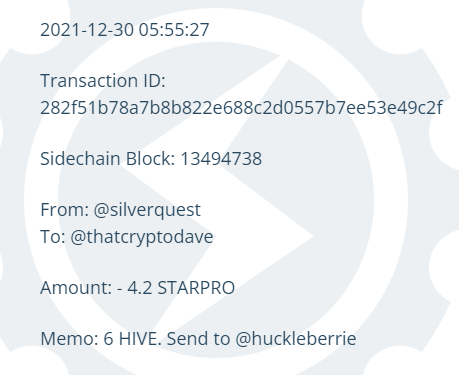 Done and done. Thank you so much. 👊
For future reference, should I speak to you each time I would like to do that? Or should I just send HIVE with a STARPRO memo, or something like that? No trouble on my end... whatever is least awkward for you guys.

Everything I do is manual. I don't have the coding knowledge.
Just sending HIVE to Huckleberrie is cool.

I gave you an extremely low cost this time as you are the first to try out this idea with me.
The price on the market was selling at 1.9 and buy at 1.6

My gaol would be to make each trade you do to be of enough value to you by beating the market price.

I work the market price to be at 1.75 per token. I base this on the bids put down to get starpro and the amount of missions done daily.

I monitor Huckleberrie both on the Engine and the Hive wallet for transactions. If I am online and see activity I act as quick as I can.

Fair enough. 🙂
I'm the first? Well, it's an honour... and I really appreciate the special deal. I'll try to buy more each time so you're not wasting time on me. Thanks again, @thehive. You rock. 🤘

Ha Ha HA
This is to funny
Area you serious or pranking us?
Either way, it's cool, I assume she is well educated and is making positive contributions to these organizations. :)

No, it's no prank. lol
I haven't really kept tabs since I wrote this, but it was definitely true at the time. I have no doubt she's intelligent... it's the underlying things (that go bump in the night) that we should worry about. I digress though, as much as I can. Bigger fish to fry and all.

Thanks a lot for reading one of my oldies! I really am going to get more consistent with getting good content out there. This helps. Cheers! 🤘