On Monday, 4/12/21, Dr. Antony Davies was on campus at Oklahoma State University presenting a lecture to the Free Enterprise Society about Cooperation & Coercion. The event was livestreamed on OStateTV.

Here is the link to the rebroadcast (archive) of the recording. (NOTE: There was a mic problem during the start of Dr. Davies' talk; it only lasts for a minute or so.)

Only Two Ways to Influence Someone ...

There are only two ways that humans work together: they cooperate with one another, or they coerce one another (or they employ some combination of the two). Once individuals realize this fundamental fact, it changes how they see the world.

By looking for cooperation and coercion in everyday life, individuals can begin to make sense of a wide range of issues that dominate the public debate -- gaining a clearer understanding of everything from the minimum wage to taxes, from gun control to government regulations, from the War on Terror to the War on Drugs to the War on Poverty.

It turns out that coercion is necessary . . . sometimes. Even in a democracy, we all abide by rules, including plenty that we don’t agree with, in the name of getting along.

But in the end, cooperation without question is the key to human happiness and progress. The more we encourage it, the better off we all are.

The government loves declaring war on common nouns. Poverty. Drugs. Terror. These will never end. And now you can add viruses to the list.

Remember that time you wanted to buy something but you couldn’t afford it so you put it back? That’s the biggest difference between you and the government. The govern-ment never puts anything back.

The federal government’s debt is nearly seven times its income. That’s like a person who makes $60,000 having a $400,000 credit card balance.

For the last 70 years, regardless of whether tax rates were high or low … the federal government has collected about 17% of GDP in tax revenue. Every year.

Who is Dr. Antony Davies?

He is the Milton Friedman Distinguished Fellow at the Foundation for Economic Education.

In addition, he is an entrepreneur, inventor, movie producer, weekly podcaster (Words & Numbers), and successful YouTuber (his YouTube videos on economics and statistics have garnered over 3 million views).

Dr. Davies’ visit is being jointly sponsored by the Institute for the Study of Free Enterprise and the Intercollegiate Studies Institute. 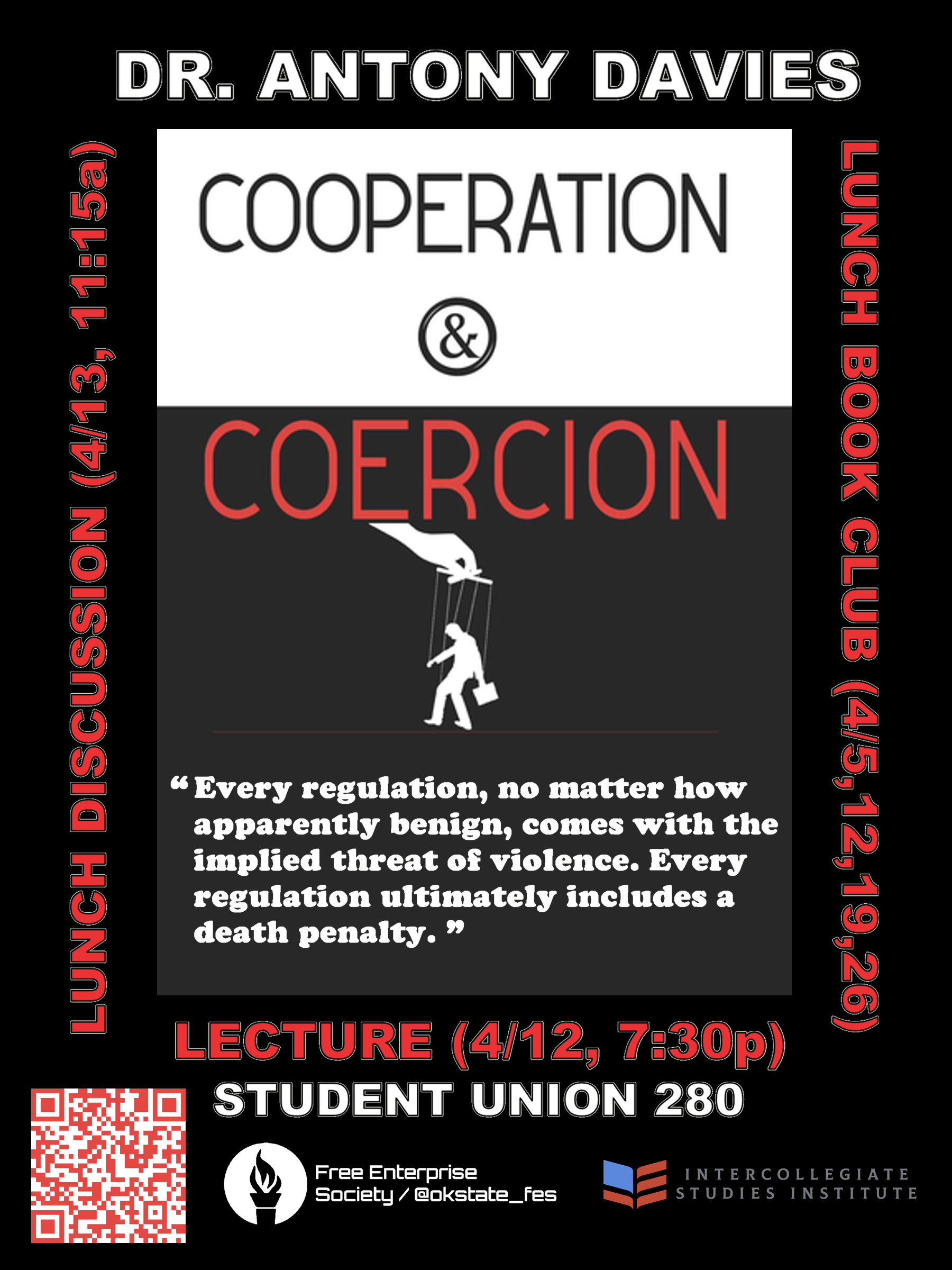 Looking forward to this talk, its a bit like the carrot and the stick approach, what you work for an employer that has neither of them?

It was a really good talk. The archive recording will be posted sometime tomorrow.

I will add the link to the original post.

The federal government’s debt is nearly seven times its income. That’s like a person who makes $60,000 having a $400,000 credit card balance.

I think a better analogy is someone employs racketeering to get $60,000 a year and controls a corporation that owes $400,000. After the term of office they are no longer on the hook for that debt. Isn't it easier to borrow money like this? Suppose you could take on a debt of say $320,000 and you would have to service it but you could borrow say another $200.000, and you would only service this debt for say four years while using a band of bandits that have been collecting money from the local people for decades. Wouldn't that be a sweet deal?

Do you think it is only government that is now getting in on this? Wouldn't it be sweet to be able to sell and force the customer to buy injectables for trillions of dollars and not be held liable for the negative effects? It's a heroin dealer's wet dream!

Wouldn't it be sweet to be able to sell and force the customer to buy injectables for trillions of dollars and not be held liable for the negative effects? It's a heroin dealer's wet dream!