Ten days ago, @ctptalk announced the beginning of the 5th edition of. CTP token Staking Challenge. The challenge calls for Hive investors to buy CTP token from hive-engine market and stake the tokens to increase their curation capacity and earnings. The top staker at the end of the period covered receives CTPSB token and other tokens as the prize. This is one of the unique initiatives on the hive blockchain that pays an investor to grow his investment returns. Yeah, it means that as you Increase your CTP stake, your vote value would increase and that means increased curation rewards.

Being a dedicated curator with the second layer tokens on hive blockchain, I can tell that the CTP token is one of those undervalued gems on Hive. The ClicktrackProfit community which is dedicated to promoting affiliate marketing and online businesses is run by a team of smart and creative hive users. @Jongolson et al have proven that all the projects birthed from the stable of the CTP community are thriving and very profitable. I've been a part of the @Liotes and INDEX projects and they're awesomely awesome.

I am not contemplating whether or not to join the CTP Staking Challenge #5 having enjoyed the benefits in the previous editions. Already, I have powered up 1,400 CTP tokens in the last 10 days and that places my stake at the 9th position in the table ranking Staking Challenge #5. 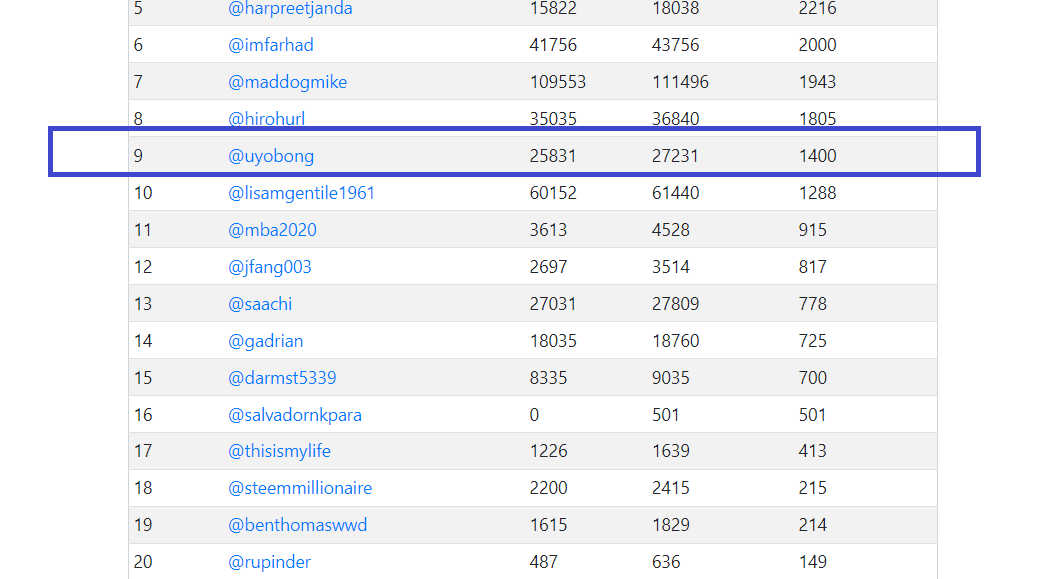 It is surprising that already, 32,000 CTP Staking has been recorded in the last 10 days. That certainly a great booster for the CTP token economy as the price would gain some traction.

The @Clickrtackprofit is a cool community to be a part of a d a top notch spot when it comes to engagement. I'm hoping to see the community evolve in the coming year and make some strategic growths with respect to it's development and token economy.

How many CTP tokens have you staked so far?

Hive-Engine is a smart contract platform on top of the Hive blockchain. It allows communities and businesses to build their own tokens, which are then built on top of the technology provided by Hive. This is the ultimate layer 2 solution. The token created on Hive-Engine is then immediately tradable with Hive on their exchange.

I am a called teacher, a serial entrepreneur and a Graduate of Agricultural Engineering. Nigeria is my root and a place full of opportunities. I dropped out of a Master's Degree programm due to funds, yet i do not regret growing the courage to start my buzsines from the scratch. Today, I've built layers of Businesses on the Hive blockchain in terms of Curation and it's a sustainable passive way of earning crypoto while learning.

You are two positions ahead of me congratulations, I have a little over 900 staked. Realistically I did not imagine that I would be into this very much and yet it is like Nascar :-)

Great job @uyobong
That is awesome my friend.
Congrats Thanks a lot for this great post and for promoting the CTP power up challenge and the liotes project :-). I'm looking forward to seeing how the staking will go on. It seems a lot of users are really serious about staking this time :-)

Fantastic to see you taking part in the staking contest @uyobong, and that you have staked a large sum of tokens already, good luck in the contest and stay awesome.