Splinterlands DAO and how it could reshape the Future of $SPS 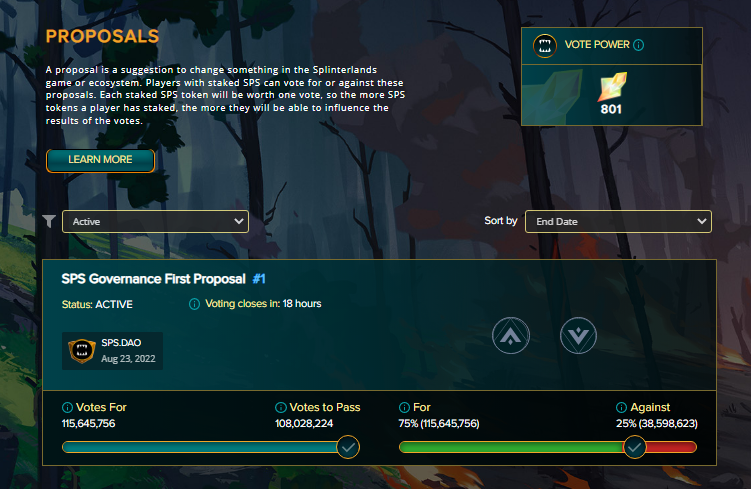 It's no more news that Splinterlands DAO is live. This means that $SPS stakeholders can now now vote for proposals of their choice for now and in the future may be able to create proposals. This was as communicated by the Splinterlands team during the last Townhall discussion/AMA. This development signals the beginning of an era of multiplied utility for the Splintershards.

First version of SPS Governance Proposals goes live tomorrow!
Only the Splinterlands team will be able to make Governance Proposals starting off
Anyone that has SPS staked will be able to vote on every proposal
The amount of staked SPS you have determines the weight of your vote
This allows the community to help make decisions rather than only the Splinterlands company
Future iterations will allow community members to create proposals as well

This development also comes at a time when the Splinterlands team ha decided to be rewarding Splinterlands battle winners with staked $SPS token instead of $DEC. According to the team, that would help DEC to correct back to it soft peg. While there are concerns that the decision could lead to the supply of more SPS tokens and consequently lead to a dump in the SPS market, it is important to also note that providing deep liquidity for $SPS markets with the role it plays in the Splinterlands ecosystem is crucial for the future entrants of new investors and players.

How will Splinterlands DAO affect the SPS Pricing?

In one of my recent submissions, I shared thoughts on a case for a $1 SPS. My submissions centered on the developments within Splinterlands, especially the soon-to be unveiled Genesis League Soccer, which has the capacity of bringing passionate soccer fans and investors to Splinterlands.

One of the recent development in the Splinterlands community being the partnership with Major League Soccer Players Association (MLSPA) to create a promising P2E Blockchain Soccer-based Game - Genesis League Soccer (GLS). This would be a massive booster within the the play-to-earn ecosystem and going by antecedents, GLS may model after Splinterlands in terms of transactions, growing number of players and growing ranking in the play-to-earn game category. Hopefully, this would have a positive impact in the economics of Splinterlands. My argument still remains valid that fun still remains a more powerful way of getting the masses to Hive. yes! many would have loved the economic pat of Hive but couldn't stay because they can't make top level long posts and are the risk of being hunted by Hive watchers. But we have seen a recent microblogging web3 solution - Threads created by @Leofinance creating a lot of buzz already and signaling a whole new future for the Leo Ecosystem.

Presently, live as been seeming hard and leisure and fun activities are the ways humanity smile out their worries. Creating more gaming solutions with a passive option of earning is a strategy that would help onboard the masses to Hive faster than we imagined. Thus, I see GLS change the lot for Splinterlands.

Moreover, the promise of an airdrop for SPS stakers would get many game lovers interested in the GLS project with its attached benefits.

There will be an airdrop for all SPS stakers
Will be a token airdrop that is for the whole platform, not just for the soccer platform... Team teased a 6 month - 12 month long airdrop source

Taking a leap from LeoFinance's successful PolyCUB DeFi DAO, we can see how the revenue grew drastically as presented in this report and has become a proven model to be adopted to CubDeFi. One can then see how the rewards sharing wars across the yield farms has motivated over 2 million worth of $POLYCUB to be committed to xPOLYCUB and vexPOLYCUB for governance voting purposes.

As hinted by the Splinterlands team, the possibility of SPS stakers to create and vote proposals such as deciding more or less rewards for certain tournaments, we would see an unprecedented rise in demand for SPS for that purpose. With many games coming to Splinterlands ecosystem, struggling for share of reward pools across the different games in the SL ecosystem could still drive up the demand for SPS massively.

This is not a financial advice, but I think I trust the hands behind SL game with antecedent success records. Anyone interested in play-to-earn should not miss $SPS in his portfolio. The future is just nearer.

Yay! 🤗
Your content has been boosted with Ecency Points, by @uyobong.
Use Ecency daily to boost your growth on platform!

I actually voted yes on this proposal.